As a Sexual Assault Survivor, It's Powerful to See Kimmy Schmidt Grapple With PTSD | Bitch Media

As a Sexual Assault Survivor, It's Powerful to See Kimmy Schmidt Grapple With PTSD 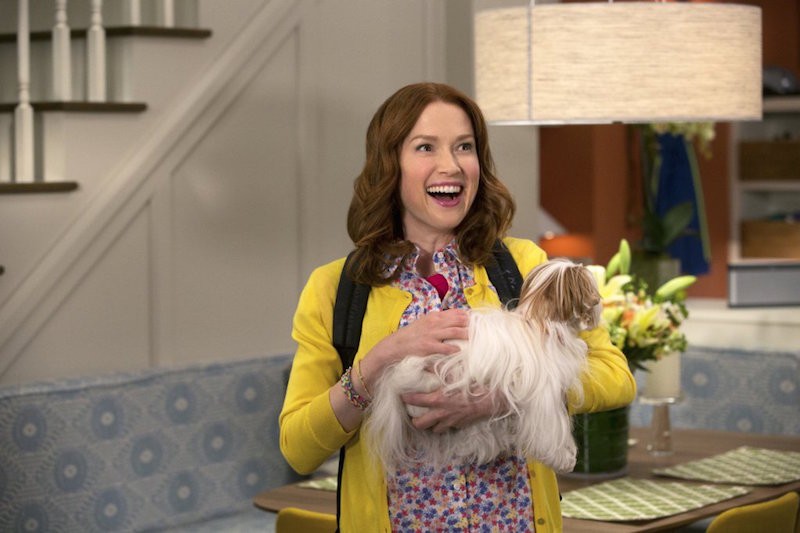 There’s a lot of burping in season two of Unbreakable Kimmy Schmidt, and not just as a cheap gag. The peristalsis—as her alcoholic therapist Andrea (played by show co-creator Tina Fey) calls it—is just one of the ways we’re finally starting to see the effects of trauma on the bubbly title character, who involuntarily lets one loose any time she talks about something that relates to the years she spent trapped by a cult leader in an underground bunker.

As a survivor of sexual assault, I’m drawn to stories about trauma. But the antics and campiness that saturate every episode of Kimmy Schmidt make it so easy to overlook the fact that the title character experienced serious trauma. When I started watching the show’s first season, I didn’t recognize the severity of her experiences until I started reading commentary about the show. I mean, who expects a comedy to be about a woman who was kidnapped when she was a teenager and raped repeatedly by her kidnapper during her 15-year captivity? Maybe that’s why the show eases viewers into the world of trauma in the first season. In fact, the impact of the trauma Kimmy experiences is pretty much glossed over in season one. When her history of trauma does make an appearance, it’s served up with a large helping of slapstick so the viewer is quickly taken from mild discomfort to the safety of sitcom-like comedy. Kimmy’s nightmares, her screaming in her sleep, her fear of Velcro, and her violent reactions to being surprised are all delivered with a blink-and-you-missed-it speed, and the viewer doesn’t have time to process anything except the jokes that follow.

That all changes in season two, when we actually start to see Kimmy display progressively severe symptoms of post-traumatic stress disorder. The show’s exploration of PTSD is not executed in a way that is intended to explore the true depths of the condition; there's plenty of room to argue that the show's writers just happened to pick comedic devices that could also plausibly be manifestations of PTSD. Burping, for example, could've been contrived for the sake of comedy, but gastrointestinal symptoms are actually among the symptoms that can manifest as a result of PTSD. 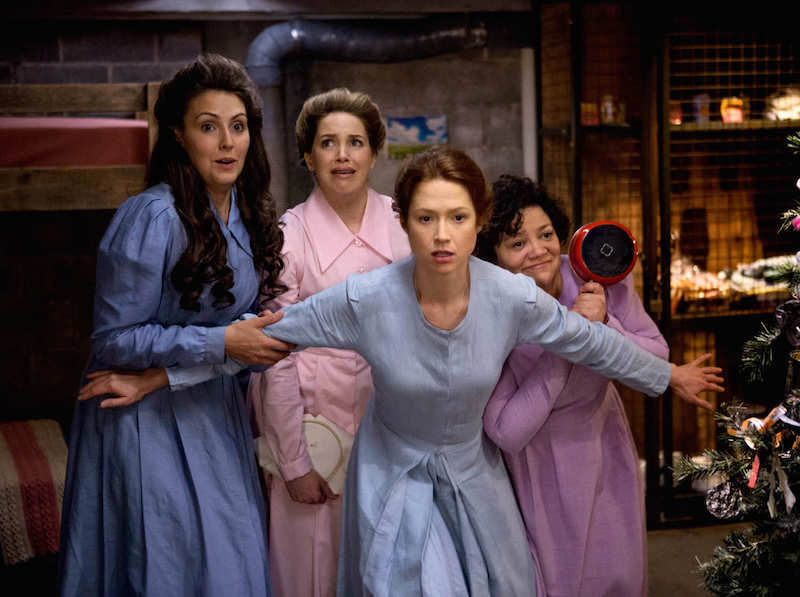 Kimmy and the other women who were held in an underground bunker for years as part of a religious cult.

“There's no one way to react or respond to an experience of sexual assault,” says Laura Palumbo, communications director for the National Sexual Violence Resource Center. “Sexual assault impacts survivors in a variety of ways…and the research supports this by showing a spectrum of ways individuals deal with the distress of assault — physically, psychologically, and emotionally.” For Kimmy, this begins with burping at the beginning of season two and quickly progresses to a very recognizable trigger response in episode seven, when she is juxtaposed with the most stereotypical display of PTSD, a combat veteran. This pairing helps to illustrate that she did, in fact, experience a severe trauma. In this episode, Kimmy meets Keith, a young soldier who recognizes the haunted look of trauma in her eyes. He mistakes this to mean Kimmy is also a soldier, and Kimmy decides to let him believe that’s her story. We see the two characters' PTSD manifest when they attend a gala together. Someone pops a bottle of champagne, triggering Keith and causing him to yell “Hit the deck!” as he tackles Kimmy to the ground. Kimmy immediately begins punching Keith, yelling, “Let go of me, you old man!” She then puts him in a choke hold and yells, “I’m gonna rip your beard off!” It’s important to note that Keith is not old, and he does not have a beard.

Like the burping, this scene might also seem contrived because Kimmy has never seen combat. However, a PTSD sufferer’s brain cannot always tell one situation from the other. All it perceives is danger.

“The way our brain catalogs memories during traumatic events is different than [how it catalogs] happy memories,” says Candice Lopez, director of RAINN’s National Sexual Assault Hotline. “It wants to hide them away so we don’t recollect [the traumatic event]. When we do recall, it’s when an incident mirrors that trauma.”

For Kimmy, Keith’s actions mirrored the violence she experienced at the hands of the Reverend, and her brain simply reacted to keep her out of danger.

In episode eight, we see a less recognizable—yet equally campy and contrived—manifestation of PTSD when Kimmy tries to have sex with Dong (see this article for problems with the racial jokes about his character, by the way). She and Dong sneak away to an abandoned hotel, but every time Dong tries to kiss her, Kimmy hits him on the head with the hotel phone as if some external force is controlling her. She is appalled and confused by her actions, and the couple end up abandoning their efforts to have sex and leave the room to find ice for Dong’s head. Later, in the back of a police car (I don’t want to spoil everything by telling you how they got there), Kimmy decides this is her last chance to sleep with Dong, since he will most likely be deported after this incident.

She tells him, “There’s no old telephones in here, and you’re in handcuffs, which is making my brain feel calm…for more totally normal reasons.” Dong is handcuffed, and Kimmy has control. She finally feels safe.

This is the moment in season two when shit got real for me. The soothing effects of the campy comedy got sucker-punched out of me in a flash of recognition and understanding. That, my friends, is what the messy, irrational-appearing, deceptively quiet moments of a trauma survivor’s life can look like. While it absolutely can involve screaming and anger and violence, it can also be soft and still and slow.

Suddenly, I wasn’t laughing anymore. A familiar knot formed in my belly, and flashes of my own battle with PTSD and the fear and the loss of control and the depression and the anger all started leaking out of the place I kept them hidden. Kelsey Miller described it so well in her recent article “Why Unbreakable Kimmy Schmidt is Too Painful for Me to Watch”: “Through the lens of a rosy comedy, this series snuck through a hole in the wall, poking at wounds I cautiously protect.”

By the time I got to the season two finale, Kimmy transitioned from cutesy comedic protagonist to fellow survivor. When the Reverend calls her from prison in the season’s cliff-hanger, I felt something akin to fear for her. I remembered my own rapist stalking me, showing up where I worked, and tracking the IP address on my computer so he could continue to harass me while I was away at college. I could feel my pulse pick up. I held my breath while I waited to hear what he was going to say to her. For me, the conclusion of season two didn’t leave me feeling entertained; it left me feeling like the ghosts of my own trauma were suddenly hanging in the air around me. 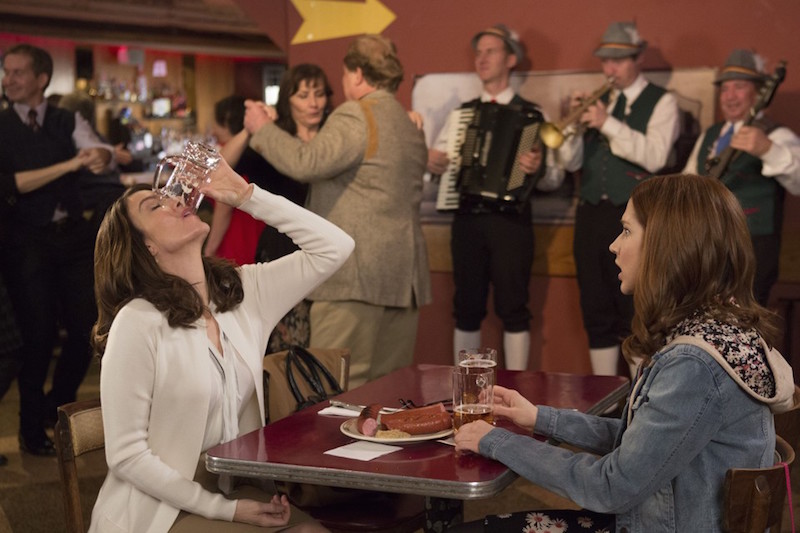 I’ve been through more than 10 years of therapy to heal from the impact of the trauma I experienced, but it’s clear Kimmy isn’t yet at a place to confront the trauma she experienced. Her strategy has been to take her mind to her “happy place,” which is an animated Disney-esque land in which she only feels positive emotions—a strategy that is reminiscent of the disassociation seen in PTSD sufferers. Hopefully in season three we’ll see Kimmy realize that facing her trauma doesn’t mean her “unbreakable” self is actually broken.

Julie Barthels,  ACS, a licensed clinical social worker who has worked with survivors of sexual trauma for 31 years, agrees. “People with PTSD aren’t broken; they’re wounded. They need to have the right environment to heal themselves.”

Barthels likes to use a piece of paper with the word “self” printed on it as an analogy for experiences like Kimmy’s. After balling up the piece of paper and smoothing it back out, you’ll never be able to make the paper look like it did before. However, although it may be wrinkled and the type might be smudged, “self” is still there.

And that’s what’s important. No matter what happens to her, Kimmy will always be her unbreakable self, just like any other trauma survivor. 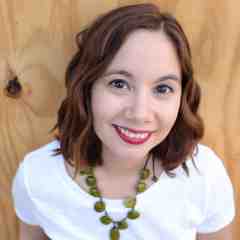