After Weinstein, a Sexual Violence Reckoning Is Coming In Publishing | Bitch Media

A Sexual Violence Reckoning is Coming In Publishing 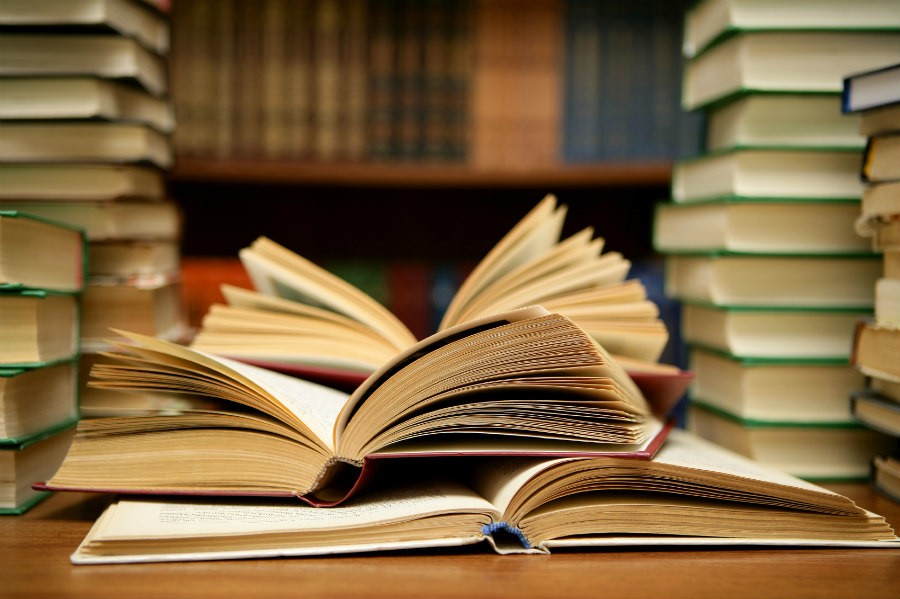 In the waning months of 2017, a strange thing started happening. People, mostly women, started naming powerful men who’ve committed sexual violence, and those men began facing consequences, including firing, industry blackballing, and public calls for accountability. Since the New York Times posted its initial report about Harvey Weinstein in early October, a snowball effect has accelerated through politics, media, sports, massage chains, and more, without apparent end. This is a novel series of events in a culture that often dismisses, belittles, and shames survivors of sexual violence rather than telling their stories. Yet, one industry has been notably absent from the conversation about sexual violence: publishing. Where is publishing’s sexual violence reckoning?

The publishing industry is a strange world with myriad subcultures and much behind-the-scenes dealing. While readers think primarily of the authors they love, the industry includes a small army of people who bring books to life. Agents, editors, publicists, copyeditors, reviewers, and numerous other people are integral in taking a manuscript from a writer’s laptop to the shelf of your local bookstore. They also determine what books get to take this journey, and, to some extent, how well they will sell.

An industry filled with endless gatekeepers and checksums breeds systemic resistance to change; the growing discussion over diversity in children’s literature is an excellent example of how challenging it is to push back on industry norms. While frustrations with lack of representation in children’s literature were a perennial problem, they gathered steam online in 2014. A conversation between Malinda Lo and Ellen Oh led to Aisha Saeed’s #WeNeedDiverseBooks, which grew into a nonprofit and a larger movement. Racial diversity is the primary concern for many organizers, but the conversation also extends to sexuality and gender, faith, cultural origin, disability, and other elements of diversity. Even as Angie Thomas’s The Hate U Give dominates the New York Times bestseller list, authors still hear that diverse books “don’t sell,” are a “special interest,” or need to be written in ways that are more palatable to white, cis, nondisabled readers—usually by white, cis, nondisabled editors and agents. 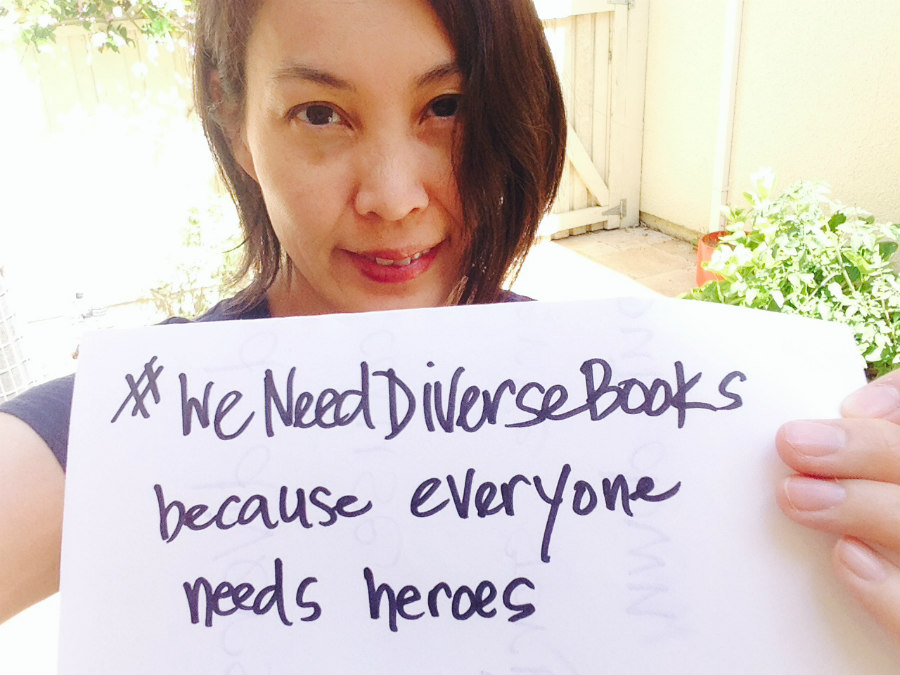 Those who speak out run the risk of alienating future professional contacts; in publishing, it doesn’t pay to be known as a “problem” or a “difficult person.” People of color, in particular, already face substantial barriers to entry in publishing even before they start talking about diversity. Resistance can be ferocious, in part driven by the heavily white, nondisabled, cis demographics of the upper echelons in an industry that is heavily built on women’s labor—supportive work in publishing is often feminized and at times racialized as well. If that sounds like a perfect storm for sexual harassment, so closely mirroring other industries where women are coming forward to talk about abusive men in power, you’d be right. Like those industries, whisper networks within publishing alert people to handsy editors, sexually aggressive agents, and other abusers, but from the outside, the waters in publishing appear remarkably calm, with a few notable exceptions.

Ousted Tor editor James Frenkel, for example, left the publishing house in 2013 after being accused of sexual harassment. Harlequin Teen editor T.S. Ferguson recently tweeted that Frenkel’s not the only person who’s committed sexual violence in publishing, however, and his sentiment was echoed by agent Pam Andersen-Victorio. It’s broadly understood that these men aren’t outliers in a national conversation about how abusive men rise to power and stay there. In publishing, the threat of losing book deals, being relegated to the bottom of the publicity priority lists, being unable to find an agent, being blacklisted at publishing houses, being iced out by big-name authors, and other fears that could lead to the derailment of entire careers are very real. But those fears are analogous to those faced by people in other industries who’ve risked everything to come out. So why not publishing?

Shaming those in publishing who feel they cannot speak isn’t productive or advisable—a conversation built on forcing people to disclose is doomed to fail. But it’s troubling to see silence from the industry, especially in the social justice corners of publishing, like so-called “kidlit Twitter.” It’s distressing to see Ferguson and Andersen-Victorio as outliers, rather than the norm, in a community that is often aggressively, courageously vocal about social justice issues. Numerous authors in the children’s literature community have been discussing sexual violence in detail in recent weeks and months, telling their stories and (consensually) those of others. That rarely results in turning a lens on the toxic soup of the industry they swim in, save vague, veiled references, while more rigorous reporting on the issue tends to rely almost entirely on anonymous sources who don’t provide details about their harassers or assailants. 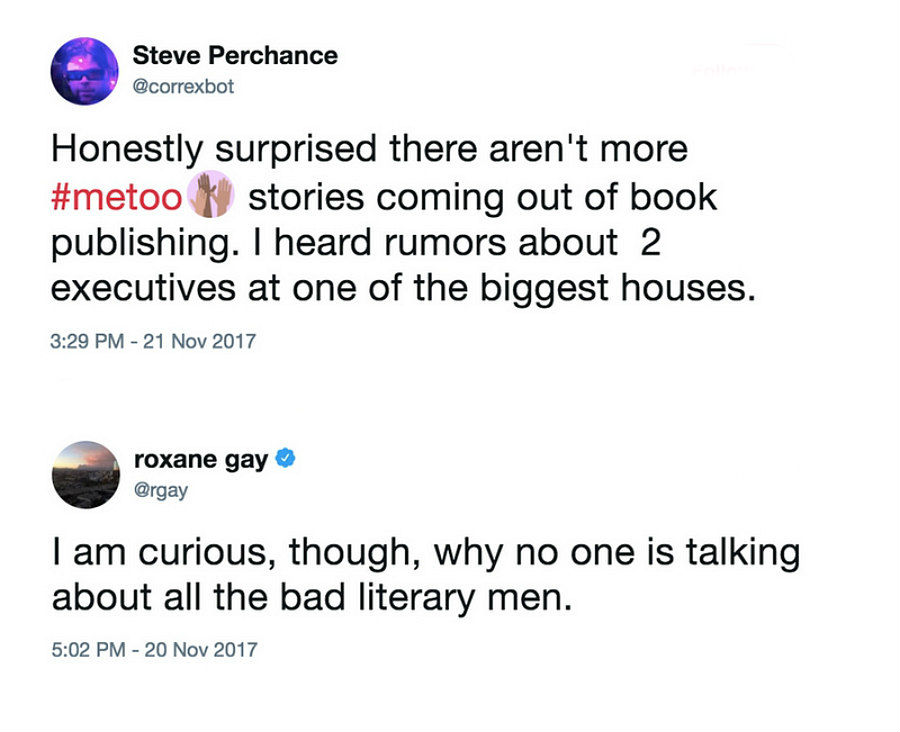 Conversations about sexual violence require a moment of critical mass, driven by people who feel comfortable coming forward, and followed by a larger group who are emboldened by their work. It’s peculiar that publishing’s critical mass hasn’t hit yet, especially for a community that engages heavily not just in conversations about social justice, but also introspective discussions about these issues.

Social media pressures authors to lead their lives out loud and in color on public timelines, exposing parts of themselves for their readers. Many others in the industry have followed suit, leading to very public and important conversations about issues like diversity in publishing and decision-making at major publishing houses. Public accountability pushes publishers to do better, though the status quo is slowly changing. It’s also a double-edged sword: Agents check out the social media of writers who query them, for example, and editors do the same with manuscript submissions. Their curiosity about the person behind the byline can pressure emerging authors to mind their P’s and Q’s on social media. Those multimillion-dollar multi-book contracts that turn heads are rare, with most authors counting on a slow, steady progression of sales to build up a career. Real artists, as comedian and writer Sara Benincasa has commented, have day jobs, and those hoping to transition to full-time writing careers can’t afford to have controversies attached to their names.

The concentration of power in New York can also exacerbate matters, especially with many writers living in far-flung locales. Small clusters of writers may share warnings, but they don’t percolate beyond those limited circles. The constant dance from publishing house to publishing house, or agency to agency, and the consolidation of publishing into an ever-smaller number of parent companies, simultaneously conceals misdoings and makes it harder to speak out about them. A publicist harassed by an editor from another house at an industry event, for example, might be hesitant to say anything, fearing that when she needs to switch jobs, there’s a possibility they’ll be working together. Meanwhile, an editor asked to leave after sexual harassment allegations lands at a new house, and starts all over again.

Like their counterparts in other industries, “rockstar” writers, editors, and agents also enjoy the benefit of a ferocious group of supporters who will turn out in force to defend them. When a writer on Girls was accused of rape, for example, millennial auteur and continual problem child Lena Dunham rushed to his defense—despite building a career on claiming to care about gender issues. She was promptly roasted for it, with one Lenny Letter writer quitting in protest. This has a chilling effect on would-be accusers, especially since mobbing behavior is often exhibited on social media, providing an immediate and very real illustration of what might happen if someone speaks ill of a beloved figure in the industry. 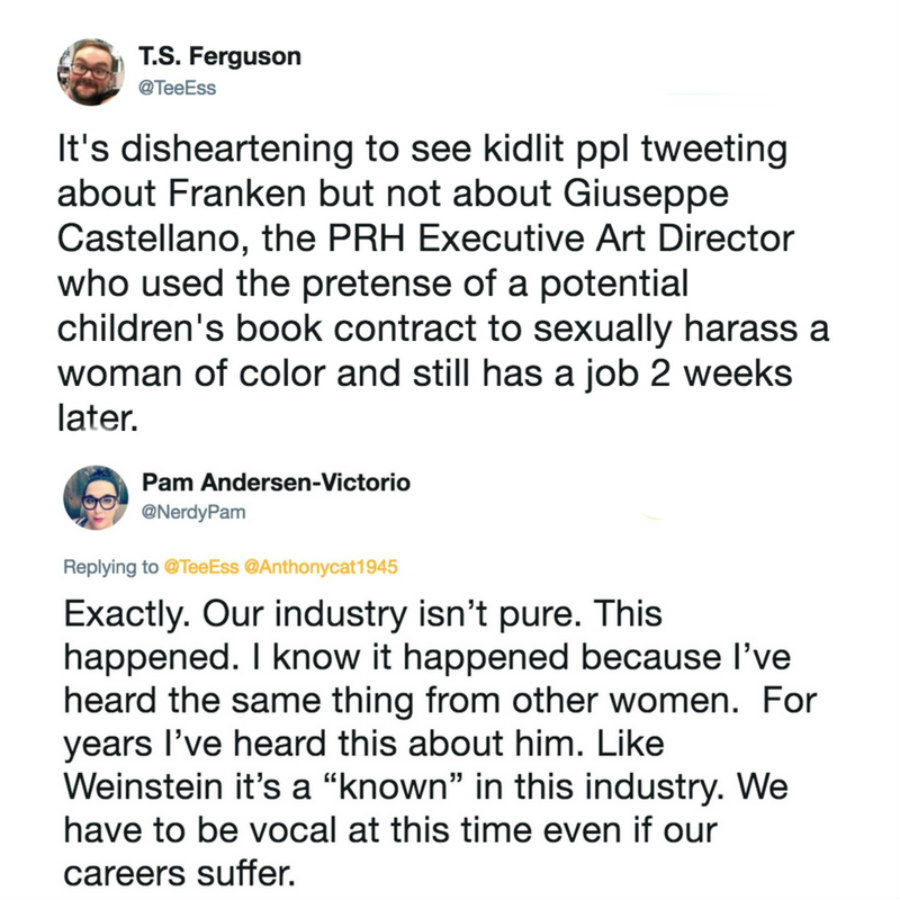 There’s nothing particularly unique about any of these factors; publishing is, in many ways, a very prosaic industry with the same harmful institutional structures present in Hollywood, media, and politics. In the arts, abuse is propped up by a system of incredible power on the part of arbiters of what is “art,” paired with nepotism for those with connections and a sense of helplessness for those trying to break in. In that climate, it’s hard to be in the first wave. Excellent investigative reporting by talented journalists, including Ronan Farrow and Jodi Kantor, has driven the conversation about sexual assault in other industries. There certainly are other journalists who are ready and willing to report on sexual violence in publishing, especially since there’s a great deal of crossover between publishing and media. In an era when journalists are highly accessible, it’s easy for those in publishing to send them tips.

Many in the industry are waiting for the accusation that will crack publishing’s abusive culture wide open. There are hopeful signs of change in the children’s lit community. Author Anne Ursu is starting a data collection project to collate information about sexual harassment in the industry. “We’re an industry dominated by women, but there’s a lot of internalized sexism and it comes out in all kinds of ways, and the children’s book world has just as much a tendency to protect predators as any other,” Ursu told me in a direct message on Twitter. “Things get swept under the carpet. I don’t know how we begin to deal with it without recognizing there’s a problem.” The use of a form for anonymous data collection may give frustrated survivors the ability to speak up without risking everything.

However, instead of dropping cryptic comments and hoping someone else comes forward, one person, or a collective of people, must decide to act. Until then, the serial harassers of publishing will remain unchallenged.