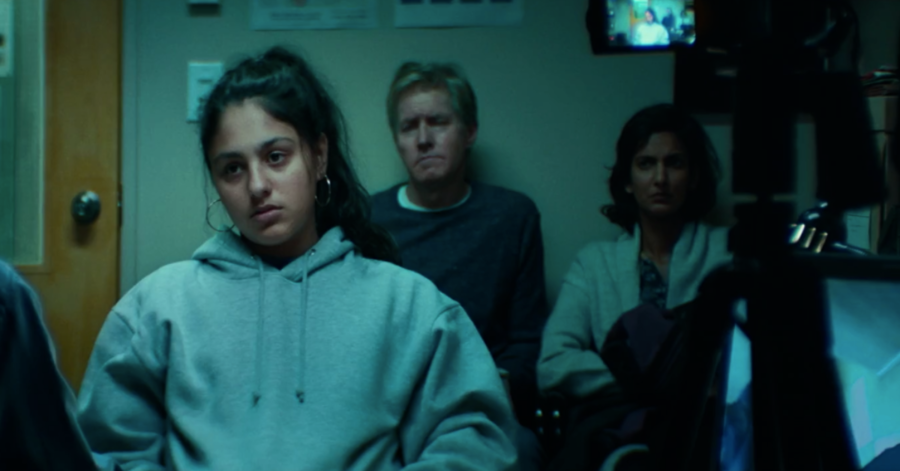 Rhianne Barreto as Mandy, left, and her parents, (Poorna Jagannathan as Kerri and J.C. MacKenzie as Mickey in Share (Photo credit: HBO)

On HBO’s Share, released in July 2019, popular high-school basketball star Mandy (Rhianne Barreto) awakens face down on her front lawn after a night of partying. She has no memory of the night’s events, but her body is covered with bruises, and she knows that someone has assaulted her. While she initially acts as if nothing has happened, her phone starts blowing up with messages—a video surfaced of the night before, showing her passed out while a group of boys discuss fucking her. “Does it count if she’s dead?” one person asks while a laughing classmate, A.J. (Nicholas Galitzine), pulls down Mandy’s jeans and exposes her to the camera. Mandy isn’t just humiliated in private: Her rape is filmed by someone who she doesn’t initially believe is one of her assaulters, and it’s unclear throughout much of the film who assaulted her.

It’s a scenario that’s all-too-common in the age of camera phones and social media: An intoxicated young woman is filmed in a compromising position and the video is shared among her peers until a teacher or parent finds out. As is often the case in real life, Mandy is blamed for her own assault, and the community rallies behind the perpetrators, who are also star athletes. Unlike other TV shows and movies about sexual assault that focus on gruesome details and subsequent family conflicts, like 13 Reasons Why, The Tale, and Fear, Share approaches the issue from an entirely different gaze. Share is one of the first movies where parents are compassionate and supportive of their daughter after she’s endured such trauma.

When Mandy’s parents, Kerri (Poorna Jagannathan) and Mickey (J.C. MacKenzie), find the video of Mandy’s assault on her computer, they immediately spring into action. Kerri asks important questions, like whether Mandy kept the clothes she was wearing, if she took a morning-after pill, and if she’d been seen by a medical professional. There’s no shouting, crying, or any response that forces Mandy to cope with their reaction. Instead, in an invaluable scene, they hug her, hold her hand, and sit with her at the police station and at home in shock, but with a steely resolve. “Do you blame me?” Mandy asks her mom. “Honey, I could never blame you,” she responds—and she means it.

Throughout the film, Mandy’s parents remind her again and again that the assault wasn’t her fault. When Mandy approaches A.J. the Monday after the assault, she asks him why he filmed her assault instead of helping her. “I thought you’d think it’d be funny,” he responds. “I took a photo because it was hilarious.” Mandy is also trying to figure out if he’s the one who raped her, as she knows that something happened but not who was behind it, but he denies doing anything more than exposing her on camera. “It’s not a big deal,” he says, dismissing her concern and anger. “You’re good.” She’s as far from good as a girl can get, and by Share’s end, we learn that it was her unofficial boyfriend-ish bestie Dylan (Charlie Plummer) who assaulted her.

When new videos emerge showing Mandy making out with A.J. earlier in the night, her father tells her that, in no way, gave him or anyone else the right to assault or otherwise violate her. Kerri and Mickey let Mandy make all the decisions about the criminal court case and leave the option of a civil suit up to her. They even let her decide if she wants to move to a different town—anything to make her feel loved and valued. I’ve never seen parents behave like this after an assault, in-person or onscreen, which, in a way, made Share seem like an alternate universe I’d never once imagined before—except it’s not out of the realm of possibility. Kerri and Mickey are modeling the kind of behavior that will help their daughter heal. Mickey only falters in this path once, when A.J.’s father Tony (Danny Mastrogiorgio) approaches him and Mandy at the store. At first, Tony is apologetic, but then he walks back the apology, saying Mandy was just as much to blame for what happened as the boys. Mickey’s cool exterior crumbles, and the encounter turns to blows. Mandy is more hurt by A.J.’s dad’s comments than the fact that her father caused a scene because she knows, without a doubt, that her father will always have her back. Too many rape and assault survivors cannot say this.

There are enduring taboos about rape that scares people away from supporting victims. In 13 Reasons Why, Jessica (Alisha Boe) and Hannah (Katherine Langford) are raped, and they don’t go to their parents because they’re ashamed and afraid of being judged. In Fear, after Margo (Alyssa Milano) is raped by David (Mark Wahlberg), she speaks out, and is slut-shamed by those closest to her, including her best friend Nicole (Reese Witherspoon). In real life, rape kits go untested because disbelieving survivors of sexual assault is the default reaction, which allows serial rapists to continue violating women with impunity.

Share makes it seem much less scary to come forward, and offers a sense of hope and validation.

Share notably illustrates how parents can support their children after they’ve survived sexual violence. Parents should be the first line of defense and support, especially for vulnerable high-school girls. Mandy’s parents follow each step outlined by the Rape Crisis Center about supporting a child after a sexual assault: Share makes it seem much less scary to come forward, and offers a sense of hope and validation. There’s a particularly gut-punching scene between Mandy and her mom Kerri as they quietly debrief about the assault. Kerri reveals that she was not surprised when she saw the video of her daughter. She tells Mandy that she’s followed stories like this before, and though she hoped it would never happen to her child, she knew it was a possibility and prepared, on some level, to respond with compassion and empathy.

Kerri’s pragmatism meets her compassion when she reveals that she’s afraid to go to the police because it might create more blowback against Mandy. Mandy looks at her mom with pure love and trust, insisting that she wants to continue the criminal court case. Share validates Mandy’s experience, artfully using long camera gazes to explore post-assault depression without stripping it of its pain. There’s an intense focus on Mandy’s face as she processes what’s happened. Her quiet but simmering grief and anger take center stage. It was amazing to see Mandy being given the space to heal, freed of the added burden of her parents’ own resulting pain or blame. Share captures the weight of introspection—the silence and stillness that happens after someone survives acquaintance rape, the disassociation, the loss of self and bodily autonomy, and trying to grapple with the knowledge that someone you know doesn’t think you are fully human.

The film also encapsulates how victims and perpetrators are treated after sexual violence: A.J.’s life goes on as usual while the principal forces Mandy to leave their school because she’s a “distraction.” Unfortunately, A.J. isn’t penalized for the role he played in violating Mandy, though he begrudgingly apologizes to her. Thanks to her parents’ willingness to empower their daughter, Mandy is also able to decide for herself not to go after her rapist after all. Share is unique in its portrayal of what surviving sexual violence as a teenager can look like when one’s family doesn’t approach the event from a place of blame or shame. Share sets a groundbreaking new model for a fresh paradigm of post-assault parental behavior. It gives me hope that there might be a generation of survivors who will be treated humanely after surviving the most inhumane of acts.

Editor’s Note: This story has been updated to reflect that Dylan (Charlie Plummer) raped Mandy, rather than A.J. (Nicholas Galitzine). [August 9, 2019 at 1:30 PM PST.]

Read this Next: Punishment Is Not Justice 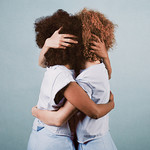 by Wendy C. Ortiz
We need to move beyond binary survivor-perpetrator framing.