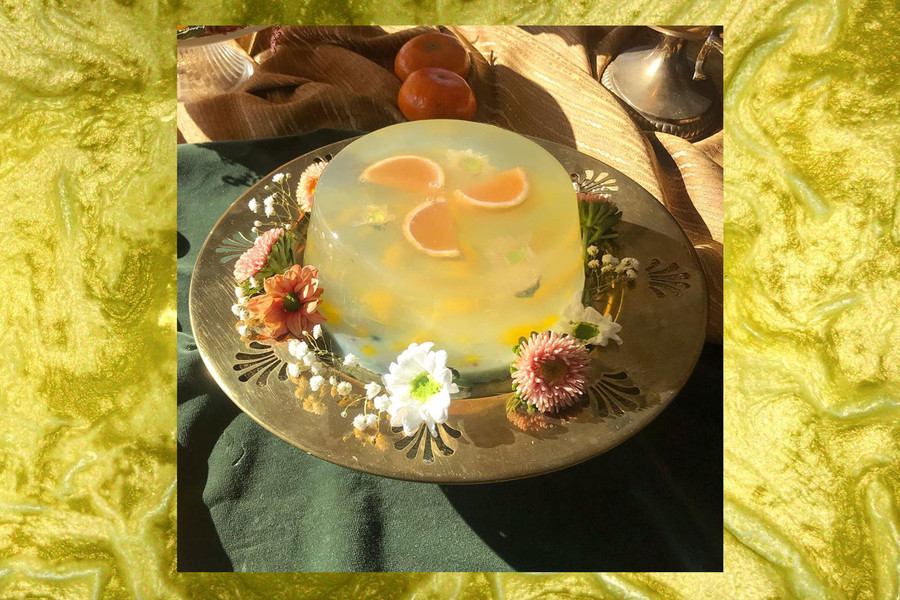 Sharona Franklin, a.k.a. @paid.technologies on Instagram, is a Vancouver-based multidisciplinary artist, writer, educator and disabled activist—also behind the Instagram accounts @hot.crip and @disabled_personals—whose botanical jelly sculptures have been making gelatinous waves online this month after the artist accused luxury fashion brand Gucci of stealing her work.

Affectionately enshrined in the culinary aesthetics of the ’60s and ’70s, a part of Franklin’s distinctive body of work is edible art. Occasionally set in the kind of scalloped molds found in post-war American cookbooks, her semi-opaque gelatin cakes boast sophisticated flavor profiles and are lovingly adorned in wreaths of baby’s breath or edible flowers on ornate, vintage trays. Earlier this month, Gucci shared a teaser for their Gucci Cruise 2020 campaign that featured pastel gelatin molds decorated with flowers and candied beads; the confections were set on silver platters and retro tablecloths and photographed with flash and POV identical to Franklin’s. Fans of Franklin’s work promptly began speculating online about possible plagiarism.

The truth turned out to be even worse. Surprised and disappointed, Franklin revealed to her nearly 25,000 Instagram followers that she was originally hired by Gucci for the campaign, even signing a nondisclosure agreement with the brand to lock in the partnership. But instead of moving forward, the Gucci representative in contact with Franklin ghosted the artist for several months, only to sever the collaboration by citing budget cuts—though the two parties hadn’t yet discussed cost or compensation. Gucci went forward with the photo shoot in July 2019, producing what can only be described as knockoffs credited to British set designer David James White and Gucci creative director Alessandro Michele.

This isn’t the first time that Gucci has blatantly stolen from a  marginalized artist; the label got in hot water in 2017 for its appropriation of a jacket made by 1980s-era Harlem icon Dapper Dan. In that case, several decades separated the original and the knockoff; in Franklin’s case, the theft is contemporaneous. This matters because Franklin is a disabled artist who lives with multiple diagnoses that exclude her from participating in a traditional workforce that largely neglects to accommodate differently abled workers. Like many other people with disabilities, she relies on welfare and social-assistance housing.

And it’s not just that a company that’s worth more than $18 billion steals work they can easily afford to pay for. By stealing from Franklin, the fashion label is exploiting for profit a body of work that is implicitly critical of the bureaucratic pharmacological structures that impact Franklin—a discourse that Gucci has no real stake in. Gelatin, which makes up Franklin’s botanical molds, is also used as a binding agent in drug capsules, linking it to the kinds of transgenic medications produced from animal stem cells that Franklin has relied on since the age of 11. Interested in learning more about the fascinating artist and work behind the theft, I gave Franklin a call to talk about her negotiations with both herbal medicines and pharmaceuticals, reclaiming the domestic sphere, and reproductive agency for disabled women.

What’s your process of conceiving the jellies and executing them?

Conceiving them is very organic: If someone asks me to make a cake, or a friend [has an] event is coming up, I’ll just think about them [and] everything they love. My friends Tiziana and Julian just got married this summer, and I thought of Tiziana’s Italian and Julian’s Chinese ancestries. I knew that their families would be coming from both countries, so I thought of persimmon. If I’m making [the molds] for myself, it’s usually on instinct, like things that I might be inspired by—smells or flavors I haven’t really had exposure to—or that I’d like to seek out.

I’m really interested in what happens after you document the jellies because they are such temporal, impermanent objects. What’s the significance of that limited lifespan? What kind of significance is embedded in their destruction?

For me, the gelatin represents the combination of bionic and botanical structures that a lot of disabled people, like myself, live within. When I was young, I was on these really intense biopharmaceuticals and pharmaceuticals, so [later] I tried to turn to natural herbs and medicines. I did get some relief, but I was never able to be free from [the] larger bureaucratic, biotech systems that were really sustaining me. Each cake I make is trying to represent a unique identity, or a scenario, or a person, or a need. So some of them are strictly medicinal, some of them are more conceptual, and then some of them are more convivial and just meant to be enjoyed.

“I think that able-bodied people need to ask, if they’re attempting to work with a disabled artist, why they want to [do so], and what they have to offer us that would make our lives better.”

For me, there’s this division of how people want to engage with me as a person, and especially as a disabled person. Within that division, a lot of people just want the facade: They want the aesthetic of art. Some people just want a fancy cake and they want to eat it, and that’s totally fine. But [other] people want to know, “How do you make it?,” and that’s when they find out, “Oh you’re disabled, that’s a different process, probably, than how an abled body person makes it,” and that adds a different quality.

Your question about what I do after the sculptures [are finished] is really great because sometimes when I make them for galleries, they just want to eat them, and cut them, and enjoy them, and I’m totally into that because it’s delicious. But then I’ve had gallerists more interested in the conceptual side of biodegradation, and I’ve had some galleries let them mold [for] as long as possible. Like, my friends here at Unit 17—they let the sculpture mold and decompose for two months and documented it. So it’s interesting because it kind of pushes the boundaries of how deeply people want to engage with temporality and immortality and celebration and aesthetics.

I’d like to talk about how corporeal your work is. The gelatin is, of course, derived from collagen, and I’ve read elsewhere that you associate that with animal-cell biomedicines.

I take transgenic medications and I take biomedicine, and I have for about 20 years. And it’s been really interesting to me because I’ve had so much pushback, especially in the late ’90s [and] early 2000s, on taking these stem-cell-–produced antibodies and stem-cell–produced temperature-sensitive cells that change my DNA. [V]egans are like, “Have you gone vegan? It’ll cure you!,”’ [and] that type of thing, but they don’t realize that the thing that cured me the most and has given me the most amount of ability and mobility [has] been these cells.

So I feel like there is a very direct correlation with my vials, which are clear—the fluid is clear—[and the jellies]. The collagen helps the body in a way [that’s] obviously different than the antibodies—but I feel like they have this similar message within them. The sculptures are kind of like a ritual honoring of that way of life I’ve had to live.

I’d like to touch on your relationship to domesticity, and perhaps your alienation from it and also the feminine, biological qualities in your work.

There’s a few different sides to that. I think for a lot of people who grow up middle or upper class, they just go to a bakery. But for a lot of people who are working class, and poor, or on welfare, having treats like pastries and cakes is very special. G]rowing up, we would make them ourselves so there was this extra amount of labor that had to go into consuming those types of confections. And then being ill, you spend so much time at home, whether it’s doing medical treatments, resting, all these types of things. I’ve always kind of worked from home. I’ve never been able to afford a studio, and I’ve also never had expendable energy to transport myself and objects to a studio. So my practice has been, by default, domestic.

There’s also the idea that, historically, women with disabilities—especially physical disabilities—can’t reproduce or can’t become mothers and [fulfill] traditional cis- female roles. And they’re considered useless because so much current feminism is based on being in the workplace and being able to take care of oneself. And for so many women, or people with disabilities at all—self-identified women, or transwomen—we’re considered non-independent if we need care, and so we become excluded from that group of the working feminist in society, outside the home.

The issue of Gucci’s theft of your work—and the theft of disabled artists’ work overall—is massively concerning. What would you like to say to gallerists, residencies, and employers in the arts who would like to work with disabled artists?

I don’t think that they’re aware of how uncomfortable it is to ask for things from people who have more power than them. I think it should be like, when they ask your name and your pronouns, they [also] ask if you require accommodations. Anybody who asks to work with a disabled person or disabled artist needs to prove to us that they’re safe. So if you’re a curator, before asking a disabled person to work with you or work for you, you need to do research and question [whether] you can accommodate them. And if you can’t, you need to leave them out of your situation because it will be damaging to the person with the disability to be involved in a scenario where they are not being accommodated.

And I think that able-bodied people need to ask, if they’re attempting to work with a disabled artist, why they want to [do so], and what they have to offer us that would make our lives better; because I think a lot of able-bodied people are looking for tokenization and clout. Able people think they have so much to offer, but all they can possibly offer is accommodations. And if they can’t offer that, then they’re doing nothing.

Read this Next: Brave New World 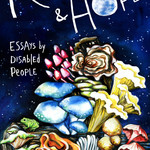 by Sandy Ho
These compassionate essays can guide the next stage of resistance—no matter who is in office or what party controls Congress.
by Stephanie Barclay
View profile »