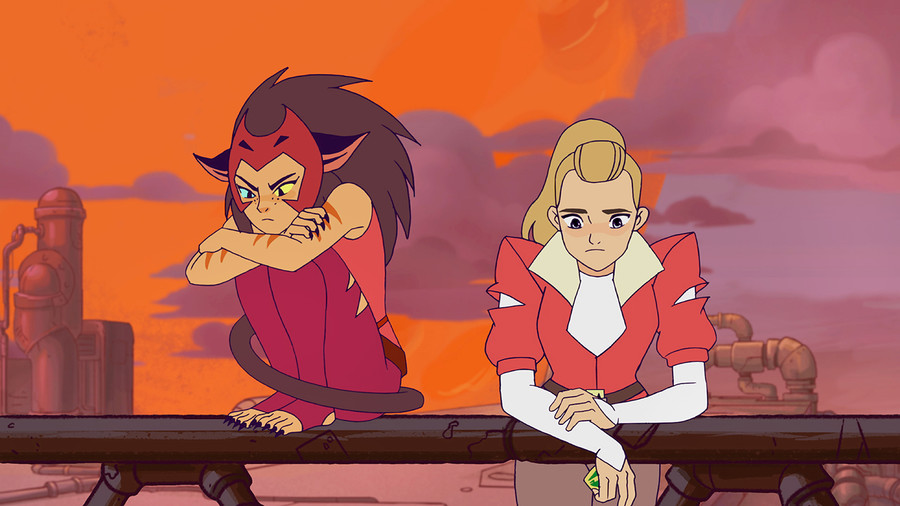 She-Ra and the Princesses of Power, Noelle Stevenson’s reboot of the popular ’80s cartoon, debuted in November 2018 amid a flurry of controversy over the titular character’s youthful, angular, anime-inspired makeover. The hostile reception led critics to focus on She-Ra and the Princesses of Power’s aesthetics instead of its plot and themes, ultimately selling the show short. Though this conversation was important in light of social media’s relentless misogyny, it’s disappointing that the show’s buzz died before critics could further analyze its stellar first season.

She-Ra and the Princesses of Power is one of TV’s best action cartoons, with a first season that’s reminiscent of earlier animated series like the original Teen Titans; Avatar: The Legend of Korra; and Voltron (which Netflix rebooted in 2016). Like them, She-Ra takes its cues from shounen anime, expertly blending humor with darker themes to cultivate an entertaining series with a complex emotional landscape. The show also resembles Lauren Faust’s excellent My Little Pony: Friendship is Magic in its telling of a female-centric story set in a glossy, candy-colored world grounded in emotional truths about friendship, community, and good versus evil.

She-Ra’s plot is a familiar one by now: A teenager’s life is turned upside down when she discovers that she’s been chosen, endowed with the power to liberate people from the clutches of evil. The twist here is that She-Ra is unknowingly aligned with the villains when the story begins. As a member of The Horde, Adora (Aimee Carrero) has been destroying her home planet Etheria and terrorizing its residents. But her life is forever altered after she finds a magic sword in the woods, and what follows is a thoughtful and often heartbreaking story about coming of age during a war.

Boasting the unique voice talents of Orange is the New Black’s Lorraine Toussaint, Marcus Scribner of Black-ish, Suicide Squad’s Karen Fukuhara, and Freeform alum Carrero as the titular heroine, She-Ra overflows with fantastic performances from a racially diverse pool of skilled actors. But there’s a clear standout in the stacked cast: AJ Michalka voices the prickly, anguished Catra, who feels abandoned when Adora leaves The Horde to join the princesses. When it becomes clear that Adora is never coming back, Catra’s playful, rogueish purr gives way to a more authoritative and menacing cadence. We can track the way her voice retreats further into the darkness as the plot marches toward the end of the season.

She-Ra interrogates the implications of Adora leaving all of her friends, who live in bunks and are treated harshly, for life as a pampered princess. (Flashbacks reveal that Adora received more special attention and encouragement than the other soldiers even when living with The Horde). The Horde isn’t full of mindless, brainwashed villains; like Adora, many of them are kids who are doing what they’ve been told to do. But unlike Adora, they aren’t given the chance to redeem themselves and live happily ever after in a castle. For Catra, who has always felt inferior to Adora, this is painful.

Adora and Catra are designed as physical opposites, in a dynamic reminiscent of Princess Ayeka and Ryoko of the Tenchi Muyo anime franchise. Like Ayeka, Adora is pretty, soft, and more powerful, while Catra has a more wild-looking design and brute strength personified by fits of anger and jealousy like Ryoko’s. Adora has a more refined, classic design with blond hair and soft, round eyes; put a gown on her and she could be a new Disney princess. Catra could never pass in the same way; she’s drawn to look villainous with piercing eyes and marks on her arms. Unlike Ayeka and Ryoko, Adora and Catra begin their lives as friends, but they have completely different recollections of their childhood. Both were abused, but the way they reacted to the abuse—Adora with determination, Catra with festering resentment—sets the tone for their emotional development.

The depth of their trauma is revealed in two of the season’s best episodes: “In the Shadow of Mystacor” and “Promise.” In the former, Adora’s trauma gets in the way of her effort to make a good impression on a hidden kingdom and its queen, Castaspella (Sandra Oh), and informs her fear that her mother-figure-turned-enemy Shadow Weaver (Toussaint) has infiltrated the kingdom and is watching her every move. When her fear proves correct, she despairs that she’ll never be able to shake off The Horde and become a hero. The trauma that follows Adora, that makes her feel unworthy of anything good, is beautifully literalized when Shadow Weaver uses her puppets to follow Adora and torment her so that every moment of attempted relaxation feels like stress—a stress that her friends don’t understand and that she doesn’t know how to explain.

“Promise,” meanwhile, is about how unequal abuse can occur in the same household. In it, we learn that although both Adora and Catra suffered under Shadow Weaver, their pain still differs. Flashbacks show a family dynamic much like that of Thanos, Gamora, and Nebula in the Marvel films: Shadow Weaver spoiled Adora while treating Catra harshly and used the inequality of the girls’ friendship to further emotionally abuse Catra. Like Nebula (Karen Gillan), Catra turns to villainy because she’s lonely and jealous of her sister figure, and like Gamora (Zoe Saldana), Adora is too preoccupied with her own complicated emotions to fully consider her friend’s pain.

Most important, She-Ra gets across that acknowledging how hard things have always been for Catra doesn’t invalidate Adora’s suffering. Instead, the show highlights their inequality by characterizing both Catra and Adora with equal emotional weight. It keenly follows Adora’s heroic quest at the same time it explores Catra’s villainous one, juxtaposing Adora’s network of support with Catra’s more isolated journey that’s fueled by Shadow Weaver’s negative reinforcement and abuse. This contrast is what binds them, making their antagonistic relationship the emotional core of the show. Adora and Catra’s relationship reminds us that empathy isn’t always easy.