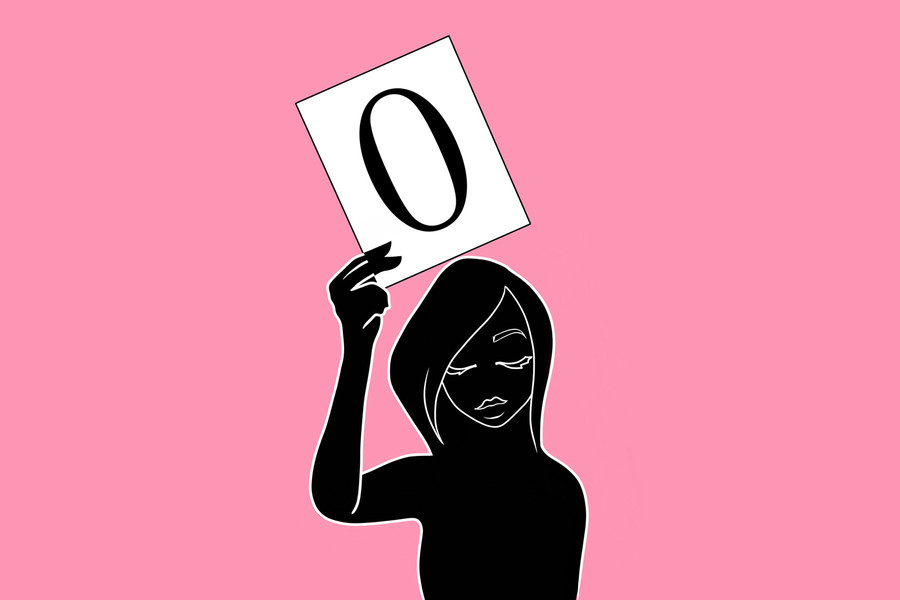 Editor’s note: This story includes graphic language that could be triggering. Please proceed with caution.

In December 2018, on the heels of the #MeToo movement and Christine Blasey Ford’s testimony before the Senate Judiciary committee, Michaela Okland, then a student at Arizona State University, decided to create a Twitter account to respond to a disturbing trend she’d observed: men becoming increasingly more dismissive of women’s experiences with online sexual harassment. Okland wanted to curate a Twitter repository of anonymous screenshots that would document this phenomenon, so she named the account @SheRatesDogs, a nod to the wholesome dog-spotting account @WeRateDogs, though, in this case, “the dogs are your exes.”

SheRatesDogs is the grimmer, sardonic cousin of its counterpart, which posts pictures of sunny golden retrievers and cockapoos in hats, rating them on a scale that ranges from 9/10 to 15/10, with wholesome captions in internet dog-speak (“good floof” or “helpful pupper”). SheRatesDogs, on the other hand, relies on a rating system that exists only in the negatives. The tweets she posts are astonishing in their range: Some of them reek of desperation (“hi” and “hey” sent repeatedly over the course of weeks or months, even as the recipient doesn’t respond). Others are violent. And some are simply absurd (a Snapchat message simply saying, “Hey, I was in a car accident. Will you send me a picture of your tits?”). SheRatesDogs catalogues it all.

Okland’s tweets unexpectedly went viral, and she soon realized that she’d tapped into a larger cultural conversation: SheRatesDogs gained 50,000 followers within two days, and she was soon flooded with so many DM submissions that she could barely keep up with the volume. The account, which now boasts more than 300,000 followers, is one of those rare corners of the internet that I scroll through partially out of fascination and partially as a form of self-punishment. “For some reason, women don’t really talk about the shitty things that are said to them online as often as it happens,” Okland tells Bitch. “I don’t think people realize how normal [this harassment] is, and how it translates into actual violence against women […] I wanted to show how common it is, because I don’t think people realize it.”

This complete lack of self awareness is terrifying pic.twitter.com/4nD3EVx7N1

I first experienced sexual harassment when I downloaded Tinder. I’d just finished my freshman year of college, and I remember giddily swiping through images of male strangers while sitting on the back deck of my parent’s house with friends on a sticky August evening. There was a forbidden thrill about it; we laughed together at badly lit mirror selfies, groaned at cringeworthy bios, and compared matches we thought were cute. It didn’t take long for us to begin receiving messages. Most of them were innocuous, but occasionally, a friend or I would receive a vulgar message or a Snapchat request that, upon being accepted, immediately led to an unsolicited dick pic. My friends (who had been on Tinder longer than I had) laughed these offenses off. That’s just what happens on Tinder, they warned me. That’s just how it is.

In some respects, my friends were right: Though online harassment is still woefully underresearched, recent surveys underscore what SheRatesDogs (or any woman who uses the internet) speaks to: Women are far more likely to be harassed online than men. Fifty-seven percent of the female respondents to a 2016 Consumers’ Research survey said they’d been harassed online compared to 21 percent of male respondents. A 2014 Pew Research study found that 26 percent of women between the ages of 18 and 24 reported being stalked online (compared to 7 percent of men), and 23 percent said they’ve been physically threatened (compared to 8 percent of men). Specific sexual harassment data for LGBTQ people, racial or religious minorities, or nonbinary or gender nonconforming people is even harder to find, but previous research indicates that those groups are in general are more likely to face harassment on the internet.

In many ways, online harassment mimics real-world harassment; it serves to police women’s speech and behavior and can force women to withdraw from online spaces. Online harassment can either be symptomatic of or manifest into physical violence or assault. Okland sees this play out most frequently in the comment section of her posts, where people say the SheRatesDogs account helped them realize they’re in an abusive or unhealthy relationship. “I’ve gotten so many responses from people saying that they’re in the process of leaving someone because of something that was triggered in their brain after reading the comments on the account,” she says. “I receive at least a few hundred DMs a day, sometimes a lot more. I keep expecting it to slow down, and it just doesn’t.”

So if she was your high school student, what does “you have always seemed lovely” mean?? pic.twitter.com/lUR3TQgYxx

I was still in college when the #MeToo movement hit Hollywood’s biggest names, including Harvey Weinstein and Louis C.K., so I couldn’t yet relate to the workplace dynamics at the center of that national conversation. Despite this, I was already seeing how the harassment playing out among big-name celebrities mirrored the experiences my friends and I were having on dating sites and social media. My friends all had stories about the disgusting or creepy messages they’d received from men online. When I was 19, one of my best friends was raped by a person she’d met on Tinder. After she told me, we both sat in silence on her bed. I was angry at myself for not knowing quite what to say, angry at the faceless date who had done this to her, angry at all of the faceless men who had sent vile messages, who make the world—physical and digital—unsafe.

When I first discovered SheRatesDogs, the account felt like a cathartic release for a resentment I didn’t even know I was holding. In one night, I binged all of the posts dating back to when the account was first founded. It’s scary. It’s also funny. Okland hams up the humor, turning a few particularly gross messages into musical numbers, and on her YouTube channel, she films herself reading creepy DMs from men after inhaling helium. There’s power in taking the thing that scares you, the thing you thought that maybe no one else was going through, putting it in the cold light of day and rendering it laughable.

For Okland, the commonplace nature of harassment is what fuels her to keep the SheRatesDogs account alive. “It shouldn’t be just these specific situations with celebrities that are receiving attention, but also the everyday experiences [of harassment], the things we just kind of shrug off,” she says. “It’s important for people to realize that it doesn’t have to just be a really powerful celebrity or a producer or CEO doing this; it can come from frat guys with no job or high school kids. Everyone is capable of it.”

Deleting Tinder and keeping most of my social media accounts private has helped insulate me from harassment. That said, women shouldn’t have to be incognito online in order to be protected; we have a right to exist in digital spaces without fearing for our safety. And even with these privacy buffers, reminders still sneak through. Shortly after discovering SheRatesDogs, I texted a phone number I had saved under a friend’s name to wish them a happy birthday and offer to buy them a drink.

They responded shortly after: “Can’t wait! Where do you want to go?”

I replied: “Up to you! You can choose from all three bars in town!”

There was nothing for a while, and then: “You wanna bang instead?”

After stewing for a few weeks in irritation, I brought up the incident to my friend. He had no idea what I was talking about. We double checked our contacts list; I had mistyped his contact by a digit. I had been catfished. At first, the whole thing was funny. But slowly, I started thinking about what could’ve happened if I hadn’t turned the question of where to meet around, if I had instead suggested the place and waited for whatever man was pretending to be my friend to meet me there. Perhaps it was some kid, just joking around with his friends. Perhaps it wasn’t. I told the story of the mix-up to a few mutual friends, and we laughed about it. And yet. For a while after the first text exchange but before I cleared up the incident with my friend, I received phone calls from the catfish’s number. I’m grateful I never picked up.

Acting as a repository for the internet’s misogyny is no simple task; the DMs that recount more serious instances of violence and abuse are what concern Okland the most. “I love that there are people who want to go to me about this kind of thing, but I also don’t want them to think I can fix it; I’m just a Twitter presence,” she says. “I also don’t see every DM that I get, so it worries me that I could be the one person someone’s reaching out to and I can’t reply because I don’t see it.” She’s considering creating customized responses with links to domestic-violence resources and hotlines, but she hasn’t figured out the right approach. “I’m still trying to find ways to address certain things because the account blew up so fast, and it’s just me on the other end. I’m just one person.”

Okland says that she’s found, in general, that men are the most horrified by the content she posts: “If a tweet says, ‘this account just makes me depressed,’ it’s usually a man because I think women are kind of used to it, and they’ve had to go their entire lives being used to people talking this way.” Some of the posts have even become self-aware; one of the submissions is of a guy jokingly messaging on Tinder, ‘please don’t put me on SheRatesDogs.’Accounts like hers, which serve as a kind of collective testimony, are a critical tool of resistance for women online. The presence of a watchdog, in its own small way, is flipping the script.

Read this Next: Bad Revenue

by Marina Watanabe
While YouTube proudly displayed a rainbow logo as a symbolic performance of allyship, they doubled down on their decision to let homophobic harassment remain on the platform. 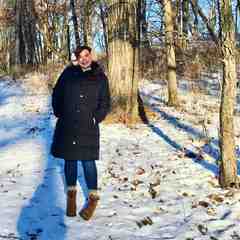 Alexandria Herr is a Ph.D. student at UCLA and a freelance writer. You can find her too often on twitter.