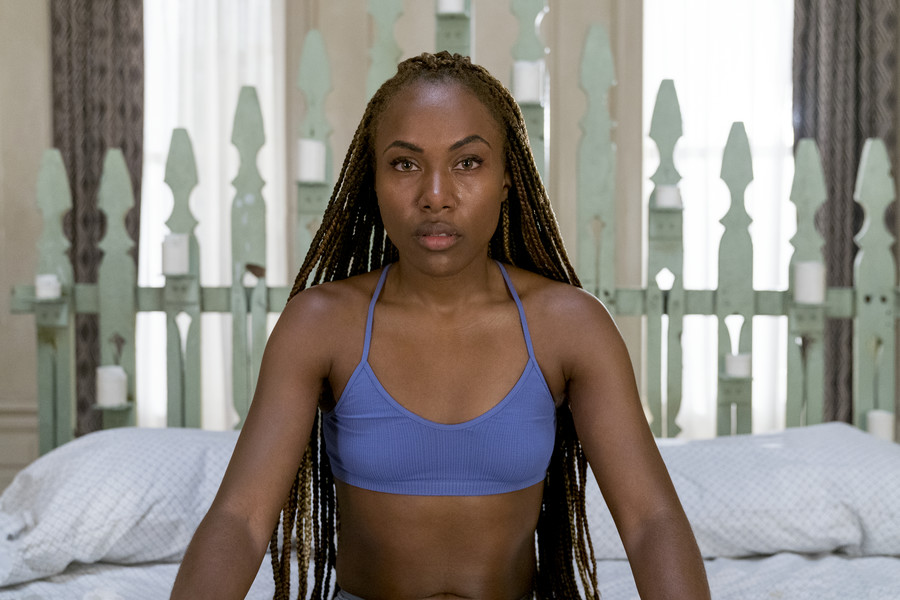 The first season of She’s Gotta Have It, the Netflix series based on Spike Lee’s 1986 film of the same name, ended as best as it could have for Nola Darling (DeWanda Wise). When our twentysomething protagonist invites her three unwillingly polyamorous lovers over for what could have quickly become a hellish Thanksgiving dinner, she didn’t expect it to end with everyone sharing a joint, dancing to Prince’s “Raspberry Beret,” and caving to the “itis.” But though this final scene seemed cute, even heartwarming, it also confirmed Nola’s lack of care for the emotional and physical well-being of Mars (Anthony Ramos), Greer (Cleo Anthony), and Jamie (Lyriq Bent): After all, she forced them to coexist in her life and her “loving bed” without their consent, and was unwilling to shift her own desires to accommodate their individual needs. Each man left Nola’s Brooklyn brownstone on Thanksgiving no clearer about his place in her life than when he entered, but Nola was content.

In season 2, Nola’s relationships with the three men drift into the background as she fully commits to Opal (Ilfenesh Hadera), the partner she’s kept on the back burner for when she needs a “self-care break” from men. The season begins with a brilliant, sunny montage capturing all of the best parts of a Brooklyn summer—heat, domino games, $1 water bottles, and furtive joints—and catches viewers up on the main characters’ lives in the 18 months since we last saw them. Nola’s parents, Stokely (Thomas Jefferson Byrd) and Septima (Joie Lee), enjoy drinks on their stoop; Jamie and his son, Virgil (Brandon Niederauer), gleefully race on their bicycles; Nola’s boss, Raqueletta Moss (De’Adre Aziza), welcomes students back to Harriet Tubman Middle School; and Nola and Opal exchange a passionate kiss. Though Nola, Mars, Greer, and Jamie aren’t free of worry or problems, they’re able to melt into the recesses of their own minds for a brief moment.

Nola’s relationship with Opal has created a massive change in her life. She’s silly, very sexual—as seen through a vivid sex scene between her and Opal—and sincere. But she’s also struggling to create boundaries in her relationship with Opal’s daughter Skylar (Indigo Hubbard-Salk), as demonstrated in one tense early scene. During breakfast, Skylar and Nola have a playful, impromptu a photoshoot that’s interrupted when Opal insists that they sit down and eat like they “got some goddamn sense.” The women’s clashing parenting styles continue throughout the season with Nola wanting to be more of a sister than a strict disciplinarian and Opal wanting her to be more of an authoritative figure.

And yet Opal is clear that she’s not looking for a coparent. “Skylar has one father…and one mother, me,” she tells Nola as they walk hand-in-hand through a community garden. “I do not like those lines to be blurred.” It’s a confusing conversation, but also a frank and necessary one that draws boundaries around the kind of relationship Nola can have with Skylar. However, Nola’s unwillingness to create healthy boundaries results in Skylar witnessing Jamie’s wife Cheryl (Sydney Morton) verbally attacking Nola outside of her school—an exchange that Nola doesn’t immediately tell Opal about.

Any parent knows that dating is a delicate balance, and that parents must choose whatever is best for their children, even if it means severing a romantic relationship. And that’s exactly what Opal does, breaking off their almost two-year relationship during a trip to Brooklyn’s Coney Island amusement park. In a way, Coney Island represents Opal and Nola’s union: Yes, there are plenty of fun times, laughs, and great food, but there are also devilish roller-coasters. The ebbs and flows of a relationship can be replaced with blip-like ups and eternal downs, until they come to a winding halt and you realize you’re stepping out of a compact car all alone.

She’s Gotta Have It handles Nola’s heartbreak with tenderness and nuance in scenes that are literally darker than those in previous episodes, and full of a deep, swallowing depression. She ignores her friends’ phone calls, rids her apartment of all Opal-related memories, and looks like lightning is living in her chest. It’s a departure from the ways in which other heartbroken Black women are sometimes portrayed onscreen: Nola doesn’t cut off her hair like Nappily Ever After’s Violet (Sanaa Lathan) or begin stalking Opal as Acrimony’s Melinda (Taraji P. Henson) does when her husband leaves her. But she does experience the emotion that she’s long tried to avoid via nonmonogamy. It’s also the first time the audience has seen Nola on the receiving end of relational pain; she’s usually the one dishing it out.

Nola’s inability to create boundaries shows how much more growing she has to do.

It’s plain that her split from Opal is for the greater good: Nola’s inability to create boundaries show how much more growing she has to do, and she realizes that a part of that growth must include focusing on things other than sex and romance. Sure, she has a couple of rolls in the hay with fellow artist Olumide (Michael Luwoye), but she doesn’t fixate on him. Nola’s response to her breakup with Opal can certainly be read as hypocritical given that she cared so little about the feelings of her own former lovers, but that’s one of season 2’s goals: to expose the ways seemingly rational adults expect behavior from others that they’re incapable of reciprocating. When Stokely warns Nola that it could be damaging to work with a big company in the prime of her career, for instance, Septima reminds him of their povertous past. “Mhmm, it must’ve been during those times when we had to eat, what was it? Cow tongue? I remember that,” she tells him. “It was in candlelight, wasn’t it Stokely? In the dark, in the dead of winter. It was fucking awful.”

Work is work, and though Nola thinks she’s compromising her artistic integrity by partnering with the major streaming company that wants to use a version of her “My Name Isn’t” guerilla art for an advertising campaign, she’s also able to pay her rent on time for once. Jay-Z recently received backlash for performing a freestyled ode to slain rapper Nipsey Hussle during his one-night only concert at Manhattan’s recently reopened Webster Hall. “Gentrify your own hood, before these people do it/ Claim eminent domain and have your people movin’/ That’s a small glimpse into what Nipsey was doing/ For anybody that’s still confused as to what he was doing.” Jay-Z intended to honor Hussle’s quest to create jobs and other economic opportunities in his South Los Angeles, California, neighborhood, many considered the lyrics a classist assault against the people who already live in downtrodden communities.

Gentrification, a friendlier name for colonialism, is embodied by middle-class and affluent folks moving into renovated hoods, bringing popular chains and overpriced brunch spots, and pushing out the neighborhood’s longtime Black and Brown residents. She’s Gotta Have It dives into the issue with great complexity, especially through Nola’s commitment to keeping her art “pure.” She’s fiercely loyal to her beliefs about her art and who she creates it for, which has unintended consequences. This was an issue in the first season when Nola’s friend Clorinda (Margot Bingham) uploads her “#MyNameIsnt” campaign to YouTube without her permission and forces Nola to publicly own art borne from a deeply personal trauma. “My street campaign was something completely separate, right? It was this anonymous thing,” Nola tells Clorinda when she uploads it to YouTube. “You’re asking me to put a price on trauma, Clo.”

Nola understands that trauma porn is a tactic often used to beef up the work and lives of Black women for clicks and scholarships, but it is also demeaning. Personal choice is the only thing that separates indulgence from the desire to share the painful events of your own life. Are you speaking out because you want to or because someone else wants you to? Nola realizes that the money and accolades that comes from partnering with earWave will validate her as an artist, but she can’t shake the feeling that she’s depowering herself by recreating work that helped her heal. After her split from Opal, Nola is finally in a place where she’s allowing herself to fully focus on herself and her work. She’s able to be herself and map out her future and ideas on her own terms.

Darling has dedicated herself to personal evolution, or at least the idea of it, from the start of the show, so it’s appropriate that she follows through. She also wokes herself right out of a $10,000 check when she confronts self-absorbed racist, Dean Haggin (Danny Hoch), at a retreat for Black artists that he funds. Though Dean appreciates her calling him out for defacing her art and appropriating Black culture, he also decides to donate her stipend to students at Spelman College. In other words, Nola’s convictions cost her a check, but she’s still able to preserve her integrity.

Ultimately, the groundedness of She’s Gotta Have It’s second season gives each character more depth and helps viewers understand their choices. Mars cuts his hair; Nola embraces the kind of relationship she’s long avoided knowing she may get hurt; Greer is happy in a new relationship; and Jamie and Virgil’s mother, Cheryl, are working on coparenting. It feels like every serious character has evolved, and thankfully, Nola has greatly lessened the role that sex play in her life. She is finally becoming her own woman—and getting her shit together. Ase.

Read this Next: Superficial Boundaries

by Evette Dionne
Nola Darling erects superficial barriers that don’t protect her or the people she’s engaging with.