Ms. Jackson If You’re Scary“Shirley” Is a Biopic in the Form of a Domestic Ghost Story 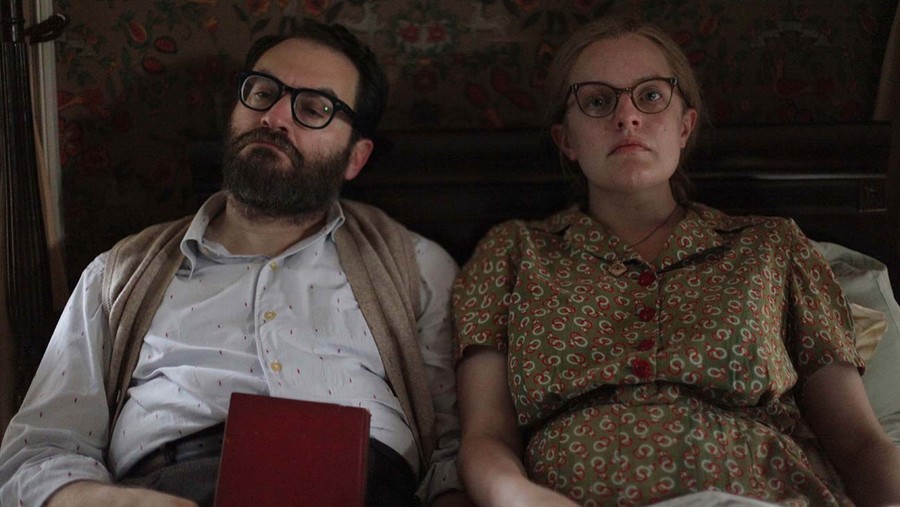 Stories about the female geniuses of literature and art are soul-affirming when done well. Alan Rudolph’s Mrs. Parker and the Vicious Circle (1994) was the first time I felt like female genius was being taken seriously on film. I felt it again while watching The Hours (2002), which later became the poster film for depicting both female genius and mental illness. In the small number of films afforded to us about historical female geniuses, there has been a constant theme of male intrusion. Professor Marston and the Wonder Women (2017) illustrates that well in its title and plot, in which Marston (Luke Evans) himself comes off as a somewhat stifling presence in the lives of his wife, Elizabeth (Rebecca Hall), and girlfriend, Olive Byrne (Bella Heathcote). But recently, these films of female genius have taken their subject a step further, showing us a world where women are at the center of their own stories of artistic struggle.

In 2018, the floodgates opened and we got more of these films than ever before: A Quiet Passion, Wild Nights with Emily, Vita & Virginia, and Can You Ever Forgive Me? And such portrayals haven’t been limited to biopics: Céline Sciamma’s 2019 Portrait of a Lady on Fire, though billed as a romance, is also an examination of the female artistic process and the way it can joyously flourish in a matriarchal environment. The tone of Josephine Decker’s Shirley is much closer to The Hours: downbeat and cerebral, with Decker’s trademark ethereal sound design to make it all feel like an elaborate dream. Like Decker’s previous film, the coming-of-age drama Madeline’s Madeline (2018), Shirley plays with sound and time, allowing moments and entire days to run together.

In Decker’s films, time is measured by feelings: We enter into the minds of the characters, letting the setting fall away as we settle into an ethereal space, out of focus and difficult to parse. The audience was silent during the Shirley screening at this year’s Sundance Film Festival, succumbing to the sensory overload of Decker’s style. From her early rural drama, Thou Wast Mild & Lovely (2014), Decker has always excelled at depicting images of feminine loneliness and longing. But with Shirley, she has blended her previous themes with an intense, erotic understanding of the artistic process in the absence of men.

Shirley (based on Susan Merrell’s 2014 novel of the same name and adapted by screenwriter Sarah Gubbins) tells the fictionalized story of real-life gothic author Shirley Jackson (Elisabeth Moss) and her tumultuous relationship with her husband, famed literary critic and Bennington College English professor Stanley Edgar Hyman (Michael Stuhlbarg). The beginning of the film shows a young couple arriving at their Vermont home in a setup right out of Who’s Afraid of Virginia Woolf? The couple is Fred (Logan Lerman), Stanley’s teaching aide, who is hoping to become a professor in his own right, and Rose (Odessa Young), his pregnant new wife. Shortly before they arrive, a young woman at the college disappears. Shirley decides to make the missing girl the subject of a novel. Slowly Rose becomes Shirley’s muse and they develop an intense sexual relationship.

Their courtship begins with cruelty, as Shirley taunts Rose for finding herself in a life that has become a cliché for women: “Motherhood comes with a price, you know.” When Rose explains the sacrifices Fred has made so that they could be together, Shirley responds dryly: “And now you have to prove you’re worth it. Sounds exhausting.” Rose, like many women in history, is at the mercy of a patriarchal marriage in which her husband is the breadwinner and she is forced to put her dreams aside in order to please him. The real-life Shirley Jackson was in a similar position to Rose: Despite her success, her intelligence, and the earning power of her work, her home life and finances were controlled almost entirely by Stanley. Shirley, like Merrell’s novel, explores what happens when Jackson meets a younger reflection of herself and doesn’t like what she sees.

At first, she’s angry and wants to destroy the reflection. Then she redirects her anger at Stanley, replacing him with Rose as her writing confidante. The film centers on Jackson’s isolation and the toll it takes on her mental health; though she’s respected on an intellectual level, everyone around her seems to be intimidated by her presence or weighed down by her melancholy. Rose is the only person in the film who treats her like a normal human being. Later in the film, when Jackson finally leaves the house for the first time in months to go to a party, she sits by herself on a couch and drinks. Her marriage keeps her head above water—Stanley often forces her to get out of bed, eat, and write. But it also seems to fuel her sadness, which is further exacerbated by her husband’s frequent philandering with everyone from students to the Dean’s wife. And yet, he seems to sustain himself with the power of his professorship and his glowing pride in his wife.

Jackson is respected on an intellectual level, but everyone around her seems to be intimidated by her presence or weighed down by her melancholy.

When she refuses to show him a draft of her novel, he reacts to her angrily, as if withholding her work is a larger betrayal than his open infidelity. Stanley must own Shirley’s genius; he has to be the lord of it. He must be the first to look at the work and the only one to approve it before it goes out into the world. He carries his part in her work like a badge of honor, and even as he sleeps with other women he feels pride that he can go home to his wife and know that she isn’t sleeping with anyone. Shirley’s work is their relationship.

But this time, the story she’s writing changes the context of their relationship. Writing the novel is portrayed as being painful for Shirley, causing nightmares and erratic explosions of violence and cruelty. She screams and throws things. She refuses to eat but drinks heavily. And all this agony appears deliberate, as if she doesn’t want to feel better until the book is finished. Through her process, Jackson expresses her kinship with women who are lost. When Stanley admits that he doesn’t understand why she’s writing about the topic when she never met that girl, Shirley responds angrily. “How can you say that I do not know her?” is her next question, and it hangs in the air for the rest of the film.

Rose takes part in the projection because she’s also lost, in a way. Her life is now in the hands of a man who can barely manage his own ego. As Rose’s relationship with Shirley intensifies, Fred becomes more and more like Stanley. Together, Shirley and Rose find something just short of love—an intense friendship based on their shared loneliness. And as many women in history have, they find solace in hidden pleasures. They play footsie under the dinner table. Shirley fantasizes about having Rose in the bath with her. They wander together, in mind and body, carving out a space for themselves away from the men in their lives. What they find is short-lived, but riveting to watch. Despite the absence of men, their relationship is far from equal; but their bond still feels like a profound meeting of the minds. While their husbands’ affairs are the stuff of cliché, Rose and Shirley have something worth writing about.