A Short Resource Guide to Food, Race, and Cultural Appropriation 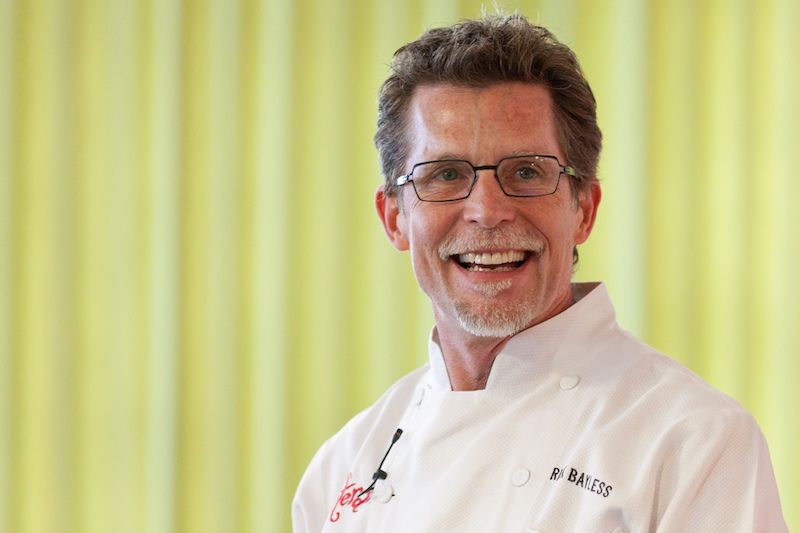 Chef Rick Bayless has built a career on being the authority on “authentic” Mexican cooking. Photo by Ben Collins-Sussman.

In recent years, pop culture critics have created conversations around issues of cultural appropriation in fashion, music, film, and fashion (looking at you, Urban Outfitters Navajo Hipster Panty). As evidenced by some recent stunningly bad examples, those conversations are far from over. Certainly folks can and do appreciate music, art, dance, and other creative outputs that originate in cultures that are not their own. The problem comes with the issue of erasure: the blatant inability to acknowledge how culture and heritage are inextricably tied together. The headdresses and bindis worn by oblivious white hipsters at Coachella overlook this country’s history of racialized violence, colonialism, and white supremacy. By removing sacred cultural objects from their original contexts and choosing to treat them as fashion accessories, wearers perpetrate colonial theft.

But what about food? Many chefs profit from successful careers as restaurant owners and TV personalities cooking the foods of other cultures. There has been some great writing about food, cultural appropriation, and colonialism, but if you’re not someone who follows food news, you might not have seen those discussions.

We are all about spurring critical conversations, so in that spirit, I’ve gathered a short list of resources to get you thinking about food, race, and cultural appropriation.

Malik Yakini is the founder and executive director of the Detroit Black Community Food Security Network. In this powerful TEDx talk, he tackles the food system and how it disenfranchises certain communities and reinforces systems of white supremacy. His talk is a reflection on how systems work against certain communities, not just in the sense of food appropriation but on a larger scale.

Chef Soleil Ho and journalist Zahir Janmohamed cohost the new podcast Racist Sandwich, which tackles issues of gender, class, and race in food. The name of the show stems from a public school principal taking flak from conservatives after she noted that it should not be assumed that all students eat peanut butter and jelly sandwiches for lunch—some students eat tortas and pitas, for example. Right-wing bloggers responded by saying, “Peanut butter and jelly sandwiches are now racist?!?!”  Racist Sandwich’s first episodes include an interview with Oregon’s only black winemaker and chef Han Ly Hwang, who runs the Korean BBQ food cart Kim Jong Grillin.

The Sporkful’s “Other People’s Food”

With the tagline, “It’s not for foodies, it’s for eaters,” The Sporkful, a James Beard Award–nominated podcast from WNYC, is all about finding “better ways to eat.” This year, the podcast created a series of episodes focusing on race and food called “Other People’s Food.” The first episode includes a cringe-worthy conversation with chef Rick Bayless about his career cooking Mexican food (he invokes “reverse racism”), but the series includes several really thoughtful conversations on the topics of race, identity, cooking, and the restaurant industry.

Luz Calvo and Catriona Rueda Esquibel want to guide U.S.-born Latina/o readers into reclaiming their culture “by sharing recipes, cooking techniques, and discussions of ingredients.” The idea is to honor history and tradition. Their cookbook, Decolonize Your Diet: Plant-Based Mexican-American Recipes for Health and Healing offers more than 100 recipes “based on Mesoamerican cuisines” and other indigenous cultures.

Another Round’s “Fried Chicken is a Battleground”

Heben Nigatu and Tracy Clayton tackle an age-old stereotype in an episode of their Buzzfeed podcast: the idea that all Black/African-American people love fried chicken. In the episode “Fried Chicken is a Battleground,” the pair delve into the respectability politics involved with fried chicken—and why it’s so ridiculous that a food so many people love turned into a racial stereotype. It’s a good jumping off point for thinking about other ways that food has been racialized in a hierarchical way.

A lot of conversations around food and race require looking at both of those spheres from a sociological point of view. Doris Witt’s book Black Hunger: Soul Food and America focuses specifically on the 1960s and 1970s and the emergence of soul food. “Celebrated by many African Americans as a sacramental emblem of slavery and protest, soul food was simultaneously rejected by others as a manifestation of middle-class black slumming,’” writes Witt. It’s a great guide to looking more closely at all aspects of food, from its creation to its visual language (i.e. brand names and icons like Aunt Jemima).

This concise 2015 article by Ashlie Stevens in the Guardian explores the intersections of food, travel, and privilege. Travelers often want an “authentic” experience, but “using someone else’s cultural symbols as a hobby can turn into an exercise in privilege.” It also discusses the trendiness of certain food types and how that impacts the people who’ve been cooking that style of food for years. “To me Filipino food is not a trend, it’s my heritage and culture, but in order to get exposure, it needs to get noticed,” says Filipino-American chef Paul Qui.

Relevant: Just Eat It: A Comic About Food and Cultural Appropriation 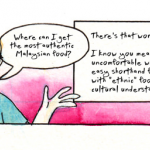 This comic is about the cultural appropriation of food—the tendency of people to easily co-opt “ethnic” cuisine as...