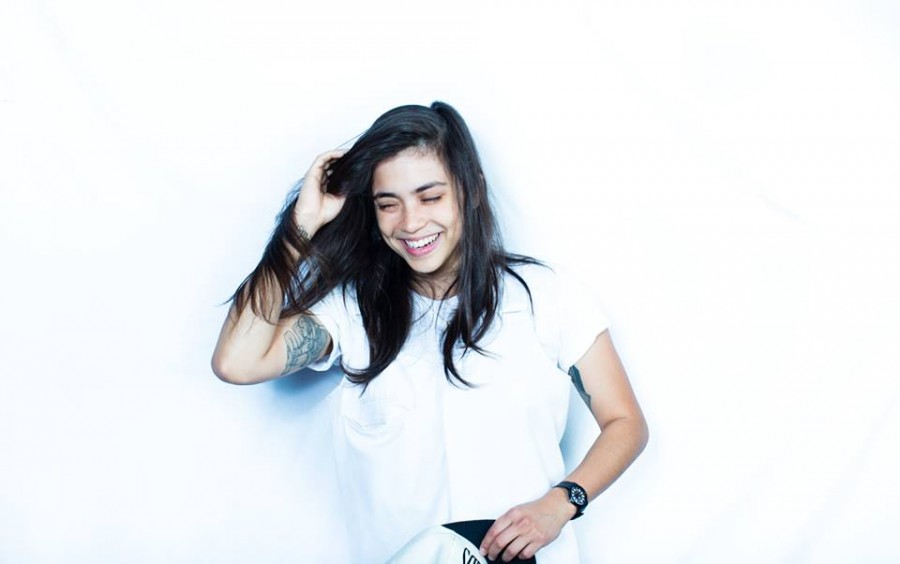 “People ask why there [aren’t] more Black women or Mexican women in rock. It’s not because they don’t exist or don’t want to exist. It’s because people tell us not to,” says Fabi Reyna. “We’re not represented in the media. Visibility is conducive to creativity.”

At age 25, Reyna has achieved more than most people twice her age: She’s a gifted guitar player, hard-working bandmate, community activist, and the founder and editor-in-chief of She Shreds magazine, the world’s only print magazine dedicated to women guitarists. This year marks the magazine’s fourth year in print and 2016 saw a six-fold increase in the magazine’s overall growth.

Over coffees in the new She Shreds headquarters, a cozy-yet-open space in Portland’s Kenton neighborhood,I talked with Reyna about what it’s been like to build a community for women guitarists and breaking stereotypes and her path to founding She Shreds.

Reyna was born in Mexico and grew up with a single mother in Austin, Texas. She recalls a childhood fueled by angst and a dislike for school. Her mother worked three jobs and since staying home alone wasn’t an option, Reyna took part in every after-school activity imaginable. At age nine, she fell in love with guitar at a music camp. Almost immediately, she was told that she shouldn’t play, both outwardly and covertly. “My classmates would tell me girls shouldn’t play guitar,” she recalls before explaining how teachers would do the same in more subtle ways. “I specifically have this memory of wanting to play ‘Johnny Be Good’ with a band and the boy who also wanted to play the lead part crying because I got the part. So they took the part and gave it to him.”

As we sit, Reyna thumbs the strings of her custom, black-and-gold Ernie Ball Music Man guitar designed by St. Vincent yet explains that these interactions were so commonplace and discouraging that she put down the guitar for years. However, at 13 years old, Reyna and her mom spent the summer in Portland, Oregon. Her mom signed her up for the Rock ‘n’ Roll Camp for Girls, a nonprofit that encourages and supports women-identified musicians of all ages  through learning to play and perform. “That totally changed my life. I started writing my own music and I learned about the history of women involved in music and how to be an activist through music,” says Reyna. Guitar became a tool to process and channel her frustrations. After she graduated from high school, she gained admission to CalArts. But instead of enrolling, she opted to go on tour with her band, Sex Hair. In the months that followed, she started thinking about creating a magazine for musicians like her.

“I was saying ‘she shreds’ throughout all of our shows because we played with a lot of women musicians. My friend Natalie Baker was like, ‘You should make a magazine,” she remembers. Despite a lack of experience in journalism or publishing, she agreed. In 2012, Reyna and a couple friends organized a small music festival called Shred Fest to raise the money needed to publish She Shreds’ first issue.

A big part of She Shreds’ mission is to “redefine what it means to be a ‘good’ guitarist,” says Reyna. “Shredding or being a guitarist is really just what you want it to be. If it’s three chords but you express yourself and feel like you’re a songwriter—that’s shredding to me. It can also be super technical but shredding isn’t necessarily defined by the technicality of it. It’s defined by the emotion that you evoke.” 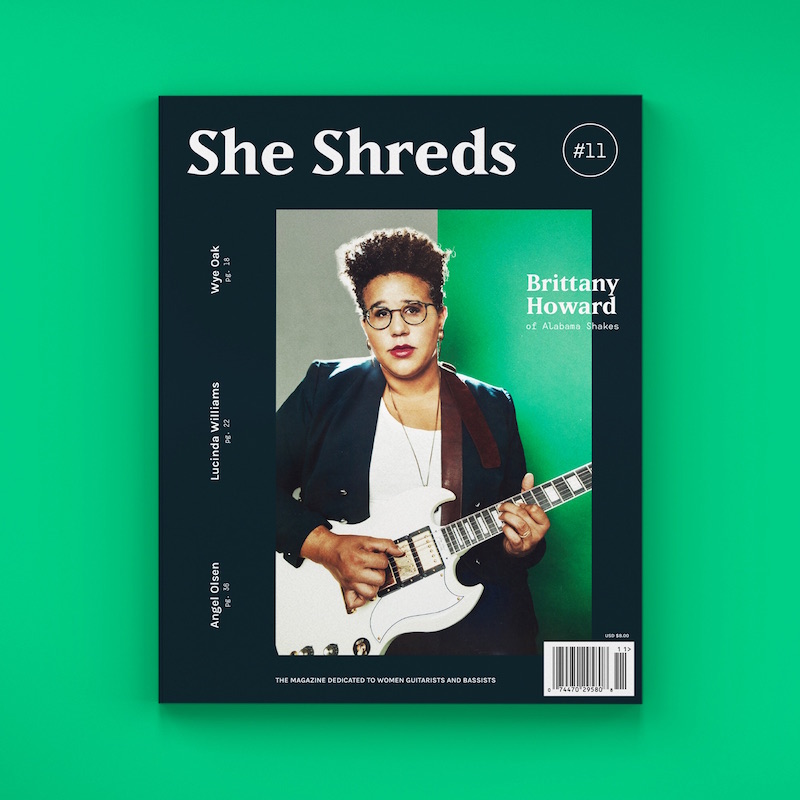 The eleventh issue of She Shreds featured Brittany Howard of Alabama Shakes.

She Shreds aims to transform the music industry by both promoting a greater diversity of musicians than are typically seen in guitar magazines and building up understanding of women guitarists as a viable market. “One of the biggest reasons I started She Shreds is because growing up as a guitar player and trying to find myself in the way that guitar culture is presented was really difficult,” says Reyna. “It was really important for me to take what I experienced as a kid and be like ‘that’s not the only option.’ The option of half-naked, pink, and glittery is totally valid if that’s how you identify [but] I don’t. So I wanted to create this space where other people who didn’t identify with that could see themselves and could feel like they could be a guitarist or musician and be heard.”

“If you’re a woman, a person of color, and specifically a woman of color, you have to fight to convince people that you are something.”

That type of visibility is crucial. Last year, a She Shreds reader snapped a photo of the issue side-by-side with an issue of Guitar World that featured a model wearing a bikini and holding a guitar. The contrast between the two different representations of women in music—one where women are celebrated music-makers and one where women’s bodies act as backdrops —helped the photo go viral. “It’s not just about women guitarists—it impacts people who just want a different perspective on our world and our stories as humans,” says Reyna. “We create our own way of seeing the world and that can be changed by the perspectives that you understand.” With Donald Trump heading into office, this is especially vital, says Reyna. “It’s more important than ever to listen to yourself, be a part of your community, and get behind a revolution. Look at activism not as something that you set time aside every day to do but that you practice 24/7 every day of the week.”

For Thanksgiving weekend, 100 percent of new She Shreds subscriptions were donated to Sacred Stone Camp and Reyna credits her own identity as a young, queer, Latinx woman as informing her ability to feel and hear others’ perspectives. This also helps her as navigate the homogenous guitar industry, she says. In the earlier years of She Shreds, a lot of feedback she received centered around the idea that their subject matter was niche. In the last year, though, Reyna says it seems like music industry folks have realized that women are actually half of the world population. “Now the conversation that I’m having isn’t necessarily, ‘Do women exist in this industry?’ [but rather] it’s ‘How do we speak to these women?’” 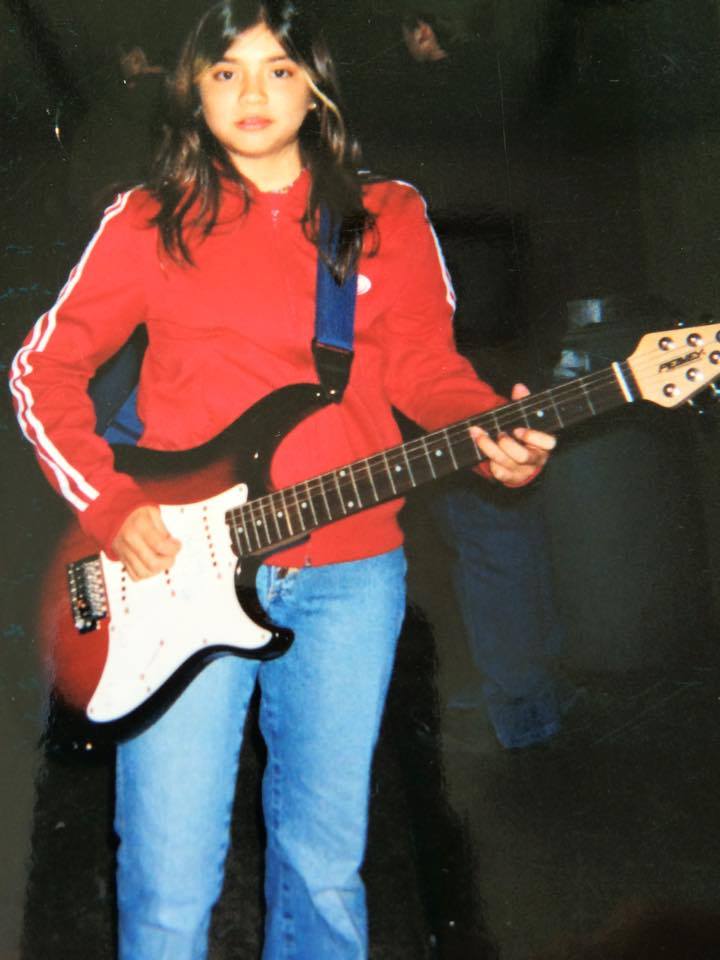 Fabi shredding as a tween.

Reyna notes that mutual self-empowerment during her business meetings are key in making the change she wants to see happen. While walking into a room full of suited, older white male executives might sound intimidating, she says, “I honestly feel like I have the most power in those rooms. They have to listen to me because I have the potential to introduce them to a market that they not only need to move forward as a brand but that they need as their next generation of consumers. I think it’s refreshing for both—they’re not who I talk to every day and I’m not who they talk to every day. Let’s just listen to each other now. But you guys listen to me more.”

Relevant: Smashing Through the Boundaries: Heavy Metal’s Racism and Sexism Problem—and How It Can Change