Layered OnionRemembering “Shrek,” the Ironic Film That Poked Fun at Us 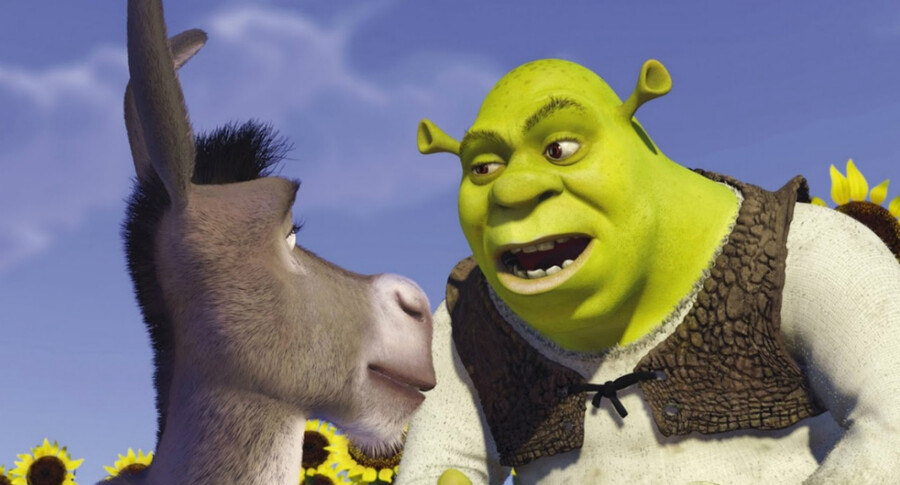 The 2001 movie Shrek begins with an unseen hand opening a gilded book. Its calligraphy-laden pages recount the tale of a beautiful, beleaguered princess who’s saved by true love’s kiss. Most of us recognize this imagery and storyline as a staple of the Disney brand of princess, a tradition that began with Snow White and the Seven Dwarfs, the studio’s first full-length animated feature. It’s also the archetype that Shrek—the animated tale of a lovable, misunderstood ogre—exploits in its opening moments. The twist in Shrek comes immediately after Mike Meyers’s lilting Scottish voiceover finishes the story. We see a thick green hand reach into the frame. “Like that’s ever going to happen,” the voice snarks, tearing the final page from the book as the scene switches to an outhouse in a swamp, where our protagonist is about to use the fairy-tale ending to wipe his big green ass. Gotcha!

Turning the fairy-tale genre on its head was a clever, if not totally novel, notion at the time, and Shrek still retains much of its ironic charm 20 years later. Arguments that the movie’s unfunny because it relies on potty humor for its gags seem undercut by the abiding, democratic hilariousness of potty humor itself. That blanket critique also ignores some of the film’s more sophisticated moments, including a spot-on spoof of Disneyland’s cloyingly cheerful Small World ride and the cheeky, referential humor and perfect timing of its Muffin Man bit. But more important, diminishing critiques miss how the film gives us a look back at a specific moment in time between the age of irony and whatever time we are living in now. Twenty years on, Shrek marks the crossroads between a pop culture world in which simply acknowledging a problem earned you a pat on the back and a shot at the Palme d’Or, and one in which we’re expected to continually work to root out systemic ills that hold us all back.

To claim, as a recent, much-scorned opinion in The Guardian did, that Shrek “encouraged a destructive, know-it-all attitude toward the classics that made any earnest engagement with them seem like a waste of time” is to give it both too much and not enough credit. Fractured Fairy Tales, animated shorts that goofily satirized these beloved stories, debuted in 1959 on The Rocky and Bullwinkle show, spawning a new genre of flipped-on-their-head children’s classics. Suggesting that Shrek pioneered this modern tradition isn’t accurate; sure, it pushed the envelope with its framing and tone, but in that respect, it was solidly within the zeitgeist of its time. Yet to claim it as entirely unearnest also sells the film short. Shrek himself is a nuanced character with layers, like an onion, if you will, and the film’s subtext considers the role of fairy-tale archetypes in our collective imagination.

The questions it asks—who “owns” our stories? And who might exploit their cultural tradition for financial and cultural gain?—are sincere and layered even while mining humor from those very archetypes. Of course, any time we invoke “the classics” with hushed reverence, while pitting them against some “cheapened” contemporary version, we ignore the constant historical reimagining that such stories have always undergone. Walt Disney himself set out to reframe the dark, often violent tales of the brothers Grimm for a modern American audience; the Grimms, meanwhile, had famously adapted their tales from much bawdier, messier oral folk traditions of their native Germany. As Jack Zipes writes in the introduction to his The Complete Fairy Tales of the Brothers Grimm (1986), the brothers freely “eliminated erotic and sexual elements that might be offensive to middle-class morality, added numerous Christian expressions and references, [and] emphasized specific role models for male and female protagonists according to the dominant patriarchal code.”

In other words, there’s never been a pure, definitive version of these stories, nor have they ever been untouched by specific points of view or ulterior motives. So there’s really no reason to hand-wring over them being bastardized by Mike Meyers and Smash Mouth at the beginning of the 21st century. For all its fart jokes and cheeky irony, Shrek actually does premise itself on some serious critiques of societal ills, with late capitalism and the commodification of beauty its primary targets. Its roast of the Disney-industrial complex is front and center, and in turning the princess mythology on its head, the film implicitly challenges long-held assumptions about who deserves a happy ending. It’s also extremely effective in getting the viewer on its side of the argument. When Lord Farquad (John Lithgow) replaces the actual, messy fairy-tale creatures with tidy, empty representations of perfection, we root for the displaced creatures and pray for Farquad’s failure.

When Princess Fiona (Cameron Diaz) wrestles with her own relationship with cultural standards of beauty, judging herself and, by extension, her travel companion, we have empathy for her internalized self-loathing and yearn to see her free herself from its grip. But challenging the status quo is always a Catch-22: In pointing out society’s problems, you also draw more attention to them, a cycle that can result in the very issue you seek to critique being spotlighted and reinforced. We see this today in the way “body positivity” can actually redefine the parameters of beauty in a way that makes women feel guilty for not feeling “positive” about their body—as well as tweaking sales pitches for expensive, unnecessary products so that “self-love,” rather than insecurity or shame, drives our dollars. You can see the dangerous political status quo reinforced every day on Twitter, where kneejerk retweets of violent extremists or QAnon wackjobs only bring more attention to their toxic claims. (“Look how stupid this is!” we cry as we provide an ever-expanding platform for their message.)

Is Shrek a good movie? Yes. Is it a funny movie? Hell yes. Does it succeed as satire? Partly. Does it hold up to the scrutiny of today’s standards of status-quo challenging media? Absolutely not. And honestly, that’s okay.

And Shrek isn’t immune to this trap, particularly because it refuses to take anything—even its own arguments—too seriously. This means that it doesn’t mind veering toward the very archetypes it seems, at first, to be skewering, especially when it becomes narratively expedient. Princess Fiona gets her fairy-tale ending, with the implication being that happy endings are available to all if they stay within their lanes. The ugly, fat people are happy together, but only because they’re now both revealed to be ugly and fat. It was perhaps possible for such a cynical twist to go more or less undetected two decades ago, but it’s a message that no longer passes muster. Much like other, even more recent films that twist fairy tale or romance premises but ultimately fall back on harmful assumptions, such as Trainwreck (2015) or Passengers (2016), films like Shrek can be read as cynical, perhaps even opportunistic. After all, Shrek itself spawned a multifilm franchise, a Broadway musical, and nearly $300 million in merchandise sales.

So is Shrek a good movie? Yes. Is it a funny movie? Hell yes. Does it succeed as satire? Partly. Does it hold up to the scrutiny of today’s standards of status-quo challenging media? Absolutely not. And honestly, that’s okay. It’s great that we live in a time where increasing numbers of people, particularly young people, recognize that the billionaire class, girlboss feminism, and the body-positivity movement can reinforce toxic notions of culture, work, and beauty. It’s fantastic that we’re beginning to move beyond tokenized representation or corporatized messages of self-love. Shrek was a film of its time, and as such it had the right instincts but an execution that doesn’t quite stand the test of time. Not because it’s not funny (it is), and not because it’s not on the right track (it was), but because the world has moved past its stance of ironic remove and toward a more engaged, transformative politics. Sure, it’s responsible for a glut of saccharine renditions of Leonard Cohen’s “Hallelujah,” and perhaps for that reason alone it deserves to be tried at The Hague. But on all other counts, I choose to see Shrek within its context and limitations and enjoy it for what it is—fart jokes and all.

Read this Next: Cat-Eared Brainwashing 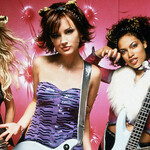 by Dejan Jotanovic
It’s a film that tickles the absurdities of the past and, in doing so, has successfully determined the misfortunes of our future.