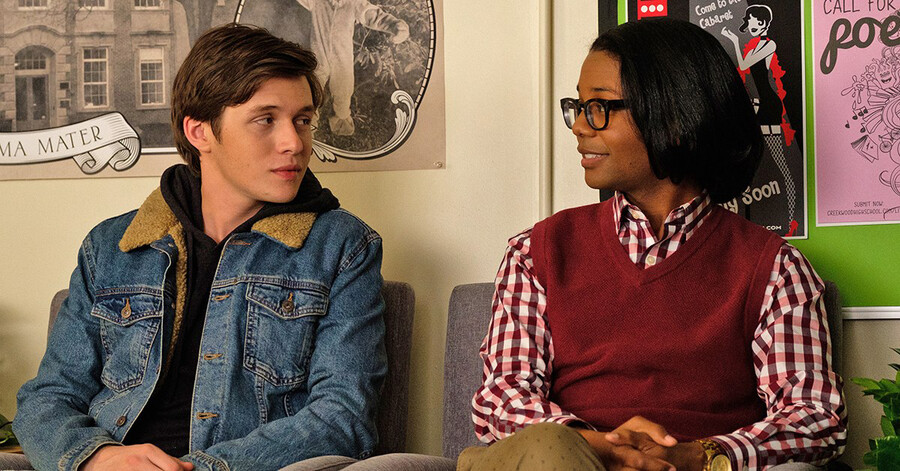 Last week on Twitter, the Simonverse—AKA the series of teen coming-of-age books written by author Becky Albertalli—became the center of heated queer debate. Albertalli’s Simonverse series, which includes Simon vs. the Homo Sapiens Agenda, The Upside of Unrequited, and Leah on the Offbeat, are some of the most prominent examples of LGBTQ representation in YA literature. Love, Simon, the 2018 film based on the first book in her series, broke barriers when it became the first gay teen rom-com produced by a major film studio. Until recently, Albertalli publicly identified as “straight,” and because of this, she received backlash for years from readers who preferred to uplift books from queer authors (or at least, authors who were out as queer).

Her assumed heterosexuality wasn’t the only target of criticism—Albertalli has described herself as “a white Democrat from an affluent suburb,” and in interviews, she regularly talks about the importance of marginalized authors getting to tell their own stories. In a 2017 interview with Goodreads, she stated, “YA publishing is still largely dominated by white, straight, thin, Christian, cis, allo, abled characters and stories. Authors and publishing professionals from marginalized groups are still often shut out in both blatant and subtle ways.” The fact that Albertalli is a wealthy, white woman and one of the most visible YA authors is worth acknowledging. That’s part of the reason why the Simonverse series has been frequently critiqued within #OwnVoices, a hashtag started in 2015 by author Corinne Duyvis to uplift diverse children’s and YA stories written by authors who belong to the communities they’re centering.

But in late August, Albertalli published an essay “I know I’m late,” on Medium, in which she came out as a bisexual woman. Unfortunately, the author’s coming out process wasn’t exactly ideal; like the protagonist of Simon, Albertalli explained that she essentially was pressured to come out. And that fucking sucks. It could not have been easy for her to be such a visible public figure while privately navigating her own sexuality. I understand what it’s like to be a closeted bisexual who is “inexplicably” drawn to queer stories and struggling to understand why they make you feel so seen. I have been that “straight” person writing queer fiction as an outlet to better understand why I felt the way I did. For a lot of LGBTQ folks, being the closeted ally loudly supporting gay rights and who is deeply invested in queer narratives is such a common experience that it borders on being a stereotype—and it’s a fair experience, even if it’s one that gives “real” queer people pause or leaves them frustrated.

Enter the discourse. Last week, in response to Albertalli’s post, bisexual writer, podcast host, and YouTuber Gaby Dunn (who has previously contributed to Bitch) tweeted, “I sort of think you shouldn’t write/create queer media and then feel weird when people ask if you’re queer?? Or maybe if you’re grappling with it you should refrain from writing about the community you’re not part of until you are comfortable being part of it?? It’s great to want to write queer stories! Do it from within once you’re comfy and not as something you’re entitled to.” When I first read these tweets on my timeline, I initially agreed with Dunn, or at least, understood where she was coming from. For authors, questions about the inspiration for their work are simply to be expected. And after seeing the publishing industry’s repeated failure to give the same opportunities to queer and marginalized authors as they do to white, cishet authors, I fully understand the weariness that many people feel about an industry centering authors they perceive (keyword: perceive) as straight. I get where that instinctive protectiveness of queer stories comes from.

But after seeing Dunn’s numerous follow-up tweets and the overwhelming number of responses from other LGBTQ people on Twitter critiquing them, the use of the word “entitled” started to nag at me. Albertalli is queer—if anyone is “entitled” to write queer stories, wouldn’t it be queer people? Although Dunn isn’t arguing that Albertalli isn’t queer, it does feel like she’s arguing that Albertalli wasn’t queer enough (and queer enough, soon enough, and publicly enough) to write Simon. In response to another Twitter user arguing that Albertalli was never straight, Dunn tweeted, “But she WAS when she got all of these things. And that’s something we have to talk about. What out or visibly queer author was passed up for these same things?”

Using Dunn’s logic, simply being LGBTQ doesn’t qualify an author to write or speak on queer issues—writers must be visibly queer in order to pass this imagined gay litmus test. I assume Dunn’s conditions for being visible are that a writer must be out of the closet, and at least somewhat active in their LGBTQ community(ies.) Interestingly, Albertalli mentions the idea of authors being “semi-closeted,” which could mean that she was out to some or most of the people in her life and was simply not out publicly. It’s entirely possible that she was active in her own LGBTQ communities, and it’s bizarre to suggest that authors owe readers an up-to-date agenda of their most recent qualifying queer activities. The point is, we have no idea how queer an author is or isn’t in their personal life, and using visibility as a litmus test for representation doesn’t work because there will always be closeted or questioning individuals in our communities—both because of the world we live in, and because coming out isn’t a requirement of being queer.

Dunn has since apologized to her followers for her statements, tweeting, “My own bitterness and skepticism of straight authors profiting off queer stories should not have been taken out against closeted authors. I am so sorry I have hurt and disappointed fans who trusted me.” But Dunn is far from the only person online to be skeptical of closeted and questioning public figures, and as Albertalli wrote in her original post, the backlash and harassment she has received for the duration of her career was “overwhelming.” Even though Dunn acknowledged the unintentional harm caused by scrutinizing queer authors in this way, there will never not be endless social media users doing the exact same thing; she wasn’t inventing the wheel, she was participating in a cycle of shaming authors who write LGBTQ books for not being LGBTQ in a way that readers approve of, and readily recognize.

The issues with queer gatekeeping go beyond the scope of LGBTQ representation. Rather, these conversations arise when white queer people attempt to apply discourse around identity more broadly to that of #OwnVoices regarding LGBTQ identity.

The issues with queer gatekeeping go beyond the scope of LGBTQ representation. Rather, these conversations arise when white queer people attempt to apply discourse around identity more broadly to that of #OwnVoices regarding LGBTQ identity. There’s been an ongoing conversation around racism in publishing, and the way that white writers are more easily able to publish books about the experiences of characters of color than authors of color are able to. Take, for example, June 2020’s #PublishingPaidMe, which shed light on the pay inequalities between Black writers and white writers. So, when a white writer is celebrated for creating narratives that center characters of color—while writers of color are ignored, excluded, and underpaid—the privileging of white voices is rightfully criticized.

In the same way that writers of color lack representation, queer and trans writers are underrepresented in the publishing industry. As such, some queer readers and authors elect to map existing conversations about racial representation onto discussions about LGBTQ representation. More often than not, these debates, which use similar rhetoric to conversations by people of color about race and cultural appropriation, fail to include any meaningful racial analysis. In a 2017 article “Is It Cultural Appropriation When It’s Queer Culture?” Ariel Sobel writes for Pride, “Straight women dressing themselves up as queer so a guy will want to rip off their clothes is all too similar to white girls like Kylie Jenner donning cornrows or Beyoncé shooting a music video drenched in sacred Indian jewelry.” Sobel then invokes the 2016 Pulse massacre as a reason to critique straight people who co-opt queer identity…without once mentioning the fact that the majority of its victims were Latino men of color. I’m not here to argue that queer culture doesn’t exist—it has a long, rich, and diverse history—but it’s not as monolithic as white queer people would make it out to be. Queerness always needs contextualizing. Some queer people might be out to their friends and on the internet but not feel safe sharing their sexuality with their family. A bisexual polyamorous person might appear straight when with one partner and queer with another, and a closeted person might be presumed straight by every single person in their life. Because heterosexuality is the default, the visibility of queerness is constantly changing depending on the context and space one is occupying. In one context, a person could be visibly queer, and in another context their identity could be completely invisibilized.

That’s why it feels misguided when white people try to argue about “visible queerness”—because queerness is not inherently visible, nor does it have to be in order for a person to find their identity through writing LGBTQ characters. This is why we can’t keep trying to talk about race and queerness in the exact same way; we need to find alternative templates for talking about queer representation. In order to move forward, we must find ways to call out the publishing industry’s lack of queer stories told by queer people without engaging in rhetoric and behavior that directly harms questioning or closeted people. I, too, want to live in a world where more LGBTQ writers are given the space to write queer narratives. And I do think it’s worth asking why the publishing industry is more open to giving opportunities to writers that they perceive as straight. But our desire to demand authors be visibly queer and represent an entire, multi-faceted community cannot come at the expense of members who are not yet ready to step out of the closet.