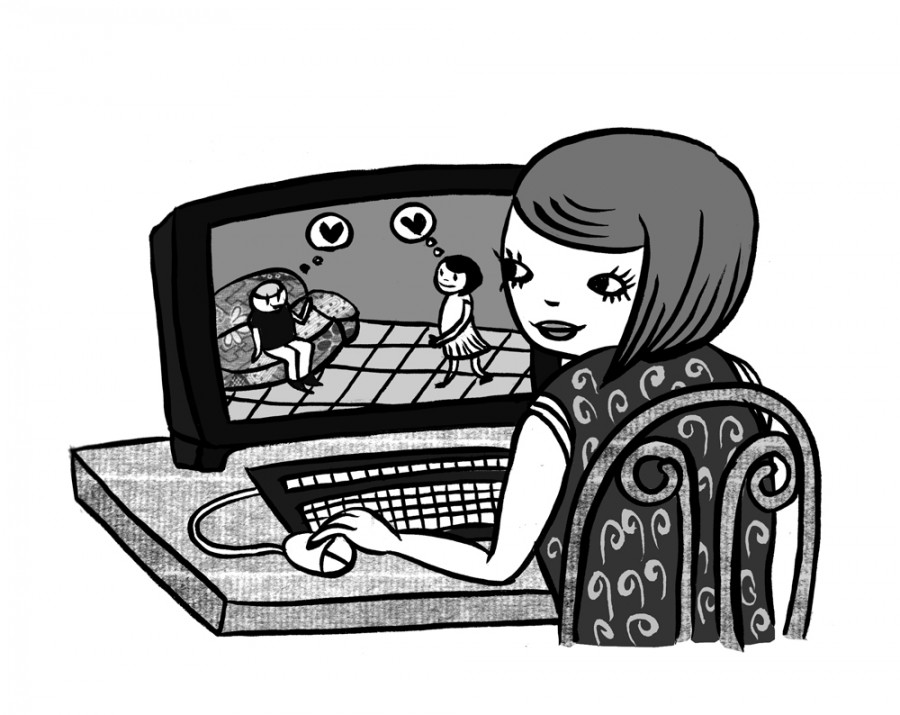 The Sims is a game that consists of little more than creating characters and pushing them through the day, making sure they eat, sleep, stay clean, make friends, advance in a career, and buy stuff. The bodily functions are tedious and the rest is everything I hate about life in a capitalist society. So how to explain why I own all seven expansion packs for the first game, as well as Sims2 and its expansion pack, University?

When I was a kid, I didn't like baby dolls. Despite their childish faces, my dolls were grown-ups whose daily lives I made up as I went along. I built them furniture and houses out of cardboard and made them clothes. It was social engineering with myself as the almighty deity, a role that apparently still compels me.

In the first Sims, there were limits to the storytelling. The lifestyle hardly varied whether a Sim dressed like Cleopatra or Lydia Lunch, and the daily grind went on indefinitely unless some catastrophe took a Sim's life. Sims2 offers far more potential: Each character has an aspiration track and only seven stages of life in which to complete it. Their mortality adds a level of urgency to the play—your Sims better be happy and accomplished when the grim reaper shows up, or you'll have an angry ghost on your hands.

I lose sleep thinking about which Sims will pair up. I wake up with a plan to pace the story in one house with the story in another. I need Brandi's son to propose marriage to Isolde to satisfy her family aspiration. I go back and forth between houses trying to keep everyone happy. Hours go by.

It occurs to me that my preoccupation with the well-being of characters in a game may suggest some displacement in my psychological make-up. This may be due in part to the social appeals of the Sim universe: In the new game, a Sim is pregnant for only three days, and men can become impregnated as a result of alien abduction. Characters of the same sex can be married or "joined" if they are so inclined. Conversely, I always feel disoriented when I'm taking great care to choose the right wallpaper for a house's bathroom or when I'm pushing a Sim to advance in a military career—especially since wallpaper has never been an issue for me, and career advancement remains elusive.

In my own life, satisfaction is amorphous and aspiration is not sequential. I am most drawn to the game when real problems seem like too much to deal with: A few hours of playing with my onscreen dolls is deeply comforting, just as it was when I was young. While my own dishes sit unwashed in the sink, I make my Sim families clean house and quietly work toward their goals. Brandi's son does propose, and she gets the energy she needs to get one more skill point and advance in her culinary career. My Sims may have had a kitchen fire, and everyone may have needed to stop what they were doing and take a shower, but in the game it all works out in the end.

Tish Parmeley writes a blog at fatshadow.com. She has written a memoir, Avoirdupois: A Life of Weight.

I'm the only person I know who will admit to loving that game. It does remind me of my B*#bie dolls from when I was a child, only better, and there is, surprisingly, a lot of strategy to the "stupid shit game" as my friend Sierra hatefully calls it. It's like the ambient music of video games. "You don't kill anyone, no adventures really, you just do all the stupid shit that you gotta do in real life." That is so appealing to me. People are so fascinating to me and it's like having a laboratory where you can see the effects of various situations, like having too many babies, on a "normal" human.
My Sims, for all intensive purposes, are immortal. I have made replicas of everyone I know according to their specifications and I nurture them and lord over them. it is very satisfying.
It is novel to see the human form reduced to it's basic human needs and wants through a video game format, I am eager to see more variety in form and humor in the games.
oh, and I only think it's fun on the pc, the console versions are limited and make you dizzy.
<3 Mimi Vaunderbroad