Sing a New Song: Trump’s National Anthem is Not About Allegiance | Bitch Media

Sing a New SongTrump’s National Anthem is Not About Allegiance 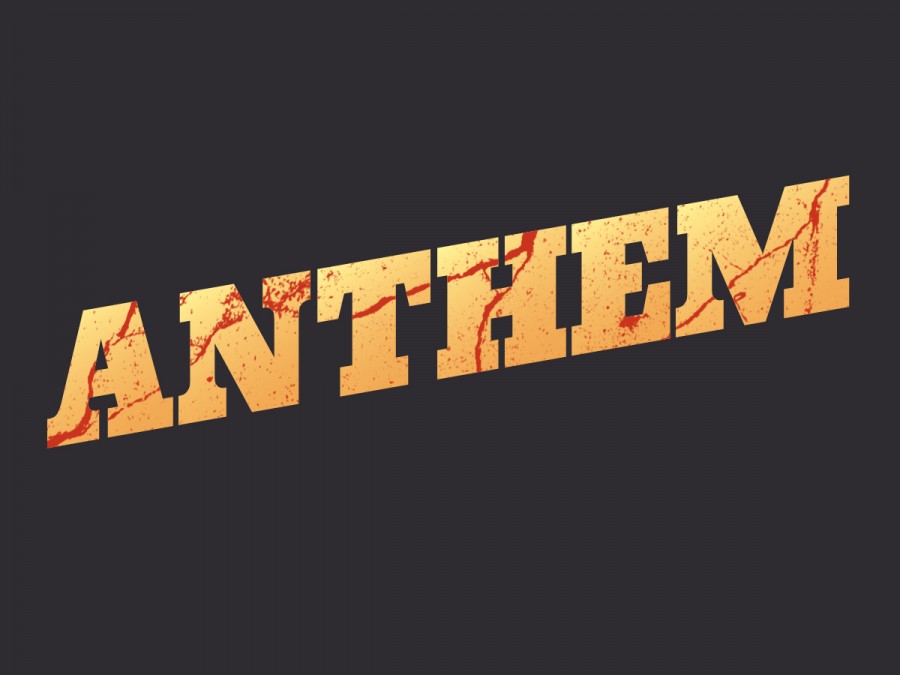 The presidential legacy of Donald Trump is already established. The only thing missing is knowing when it’s going to end and what will be the final unraveling. After nine months of this administration, we have enough homegrown chaos, threats, and trauma to forecast his place in American history: Trump is a logical mistake.

Scouring the internet will yield compelling theories which offer mental frames to understand how this came about. Ta-Nehisi Coates argues that Trump’s legacy—beginning with his campaign and extending to this very minute—could not be possible or explained without contrast to the first Black president of the United States. 45 ran on white supremacy with an unconscionable enthusiasm for degrading any group of people in the name of #MAGA.

What argument can stand against the truth that the pattern of white supremacy is part of the United States? In the continuance of America’s story, the “fine people” who could barely stomach a Black president but endured eight years nonetheless were never going to embrace the candidate promising to continue and uphold Obama’s agenda. They voted him in and now Trump has found himself a home amongst the very “fine people” at “rallies” where he slither-feeds his latest lies, distortions, and diversions. Trump’s home is where he tactically dodges actual responsibilities and makes light of potentially unrecoverable traumas (Harvey, Irma, Maria) while offering equi-capricious remarks to Kim Jong Un and calling him “Little Rocket Man.” All the critiques that frame Kim Jong Un as a narcissistic man-child who does not care for his people are an ironic reminder that we too have an American version of that. Second only to white supremacy, Trump’s legacy is his unprecedented ineptitude.

Such is the level of Trump’s incompetence that it’s difficult to ascertain which is more dangerous—his apathy to governance (what’s his REAL agenda for running?) or his inability to govern (who, then, is actually doing the governing? Pence? Kelly? First daughter I’m-not-into-politics-I-just-have-an-office-in-the-West-Wing Ivanka?). What can be ascertained beyond doubt is that no one can get off the train where Trump is the sole conductor. But while we may have to find more effective remedies to combat daily queasiness and weekly whiplash, the good news is that Trump has created enough of a folio that his erratic maneuvers can be broadly mapped. It’s in this dissection of his lack of governance that Trump can be most readily handled and understood. To his only credit, Trump’s deferral plan is the one plan he’s enacted that actually works. When faced with, say, three seismic hurricanes that drowned Houston and Miami and decimated Puerto Rico, an optimal politician would address the devastation. A par-for-the-course politician would stay on vacation, hover over the devastation, maybe chastise FEMA or another seasonally blamed branch of government. An incompetent white supremacist who cannot and does not want to govern, pulls out his deferral plan, exits the world of environmental uproar, North Korean hostility, and a swath of media watchdogs, and in its place creates an alternative universe where he is more comfortable and mobile. That alternative universe is more like a roulette table, and instead of foreign policy, climate change, and legislation, he salivates over a spinning wheel; a bevy of social and cultural commerce.

The question for Trump is how to appear presidential on his own terms. Since his specialty is real estate and constructing space, assembling a variant alternative political-cultural world in which he gets to weigh in and appear presidential is perfect for him, and it buys him time to 2020. His alchemists—an immovable white base and a flailing GOP—are performing beautifully for him to pull this off. The president, though, can’t weigh in on cultural exchanges like a commoner. The camouflage has to appear presidential. The most effective method to avoid governing is to create an alternative world, a place with barometers and etiquette for measuring true American identity. What better way than constructing the social rules of allegiance? This is precisely where we have arrived with his latest flex-attempt on the world of sports and rising, kneeling, sitting, standing for the National Anthem. It’s all a part of his deferral plan and since it’s time to pay the American people, in lieu of substance (maybe, a bipartisan plan to reform Obamacare), we have been served a hearty discourse on what is and is not acceptable posture for the National Anthem, who is not going to be invited to the White House, and who should be fired for exercising their media platform for political purposes.

What’s palpable for Trump is to call on ESPN to fire Jemele Hill for calling him a white supremacist rather than go toe-to-toe with Putin, who is speculated to have enough blackmail on Trump to shower him for years. And then comes a tweet uninviting Warriors’ star player, Steph Curry, to the White House after the NBA stated that Curry wasn’t interested in going to the White House following his team’s winning the NBA Championship, a feat which is customarily awarded by a visit to 1600 Pennsylvania Avenue. And what earned Colin Kaepernick being called a “son of a bitch” from a presidential pulpit? He committed a series of peaceful protest acts that began over a year ago by kneeling during the playing of the National Anthem. Kaepernick’s cause was clear: It was done in recognition of inequality and police brutality against the Black community in this country.

What may sound new in the sporting world is actually not new. All of the most recent messes have already played out in history. Cast a long look into our history of professional sports, including the Olympics, and you will find political dissent, draft rejection, and national piety as salient threads pulsing right alongside profile stories covering competitive sports. Sports and politics cannot be separated, which, no pun intended, is music for Trump. The mosh pit of glitz, sociality, and entertainment is more his dive than reading daily security briefings. Better to pin our political energy on anthem etiquette and tweet-policing a Black woman with a platform than to actually govern and diffuse conflict and struggle.

Where Trump decides to cast his cultural gaze, there goes our news week. It’s true that the NFL, with its repugnant apathy and limp repercussions for disciplining players with histories of rape and violence against women, decided to actually do something when 45 holler-advised NFL owners to fire players who protest the National Anthem. As Shannon Sharpe sharply said, billionaire owners don’t like to be told what to do. This wasn’t about solidarity, this was about capital and territory. Did the owners kneel during the National Anthem in solidarity with the Black community who face disproportionate violence and discrimination in this country? No. A string of white billionaire NFL owners linked arms with their players and knelt before the anthem.

In response to the NFL’s response to Trump’s response to the actions of celebrities and entertainers, the media ran with think pieces exploring the timing (the kneeling was before the anthem!) and the real message (it’s all about who owns “the shield,” not about social justice), and taking the opportunity to remind sporting fans that Jackie Robinson didn’t salute the flag or stand for the national anthem. Muhammed Ali rejected the draft. Olympics runners John Carlos and Tommie Smith were suspended from the U.S. team after they won gold and bronze medals in the 1968 games in Mexico City. Their crime? They raised their fists in the Black Power salute during the National Anthem. These are all significant points to make but there have been more discussions of Trump picking on athletes than the fact that a fraction of the hospitals in Puerto Rico are functioning.

What we have before us now, nine months into the Trump presidency, is ironically predictable. While mainstream media will continue to offer much needed history lessons on the racist roots of the National Anthem, or make space for critiques of capital-driven NFL owners, we risk wading too far into Trump’s intentionally built world and in our reacting to his appalling incompetence, forget that Flint still does not have pure drinking water, Puerto Rico has no functioning plan to restore power, and ICE continues to arrest and deport undocumented residents with no criminal records. The list goes on. There are stratified layers of political impact, and Trump wants to keep the discourse at a level where he can continue to appear authoritative.

The decisions before us are not about whether or not we have enough evidence to impeach him or what needs to happen to shock the Trump voter into regret. What we have to contend with is the reciprocation we offer, discerning what is our role in this alternative world that is simultaneously a political reality and a political farce. Since Trump designed this alternative world where kneeling during the National Anthem is more egregious than pledging allegiance to the swastika, we are forced to create our political identity in reaction to his strategic deferral plan; we are forced to follow where he panders. Maybe turning Trump’s shitshows into countless teachable moments will justify the resources and time spent on enlightenment, but we need to remind ourselves to step back and look around. After we engage in battles about the National Anthem, patriotism, and cheering LeBron’s “U bum” retort, it’s imperative to drag Trump, Trump supporters, local representatives, and our community back into the fray that Trump so desperately evades.

The political realm that Trump wants to stealthily bypass is where ordinary folks exercise power and organize not against him (because that would be playing right into his masturbatory playbook), but for those who he can’t stand—those who can’t breathe because of police brutality, those who can’t drink because there’s no clean water, or those who could not or cannot live because healthcare reform remains untouched. If Trump loses both the governing world and the cultural wars he initiates, a new anthem could be born—one in which Trump is socially dethroned and the disenfranchised take his place.