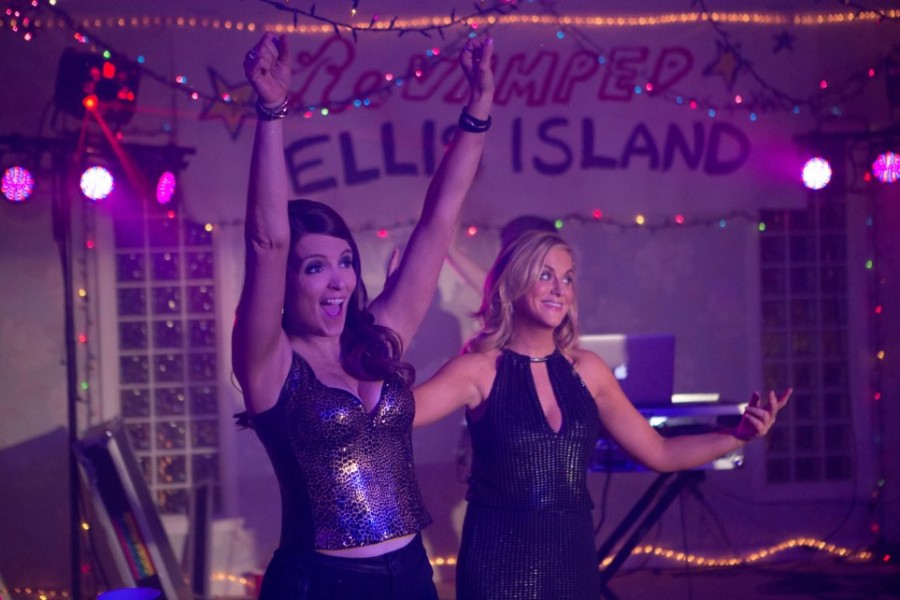 I'll confess right off the bat that I'm the target audience for Sisters, the new comedy that stars Tina Fey and Amy Poehler as estranged sisters grappling with how their lives have failed to fulfill their youthful potential. I love both Fey and Poehler individually, but together they're my comedy kryptonite—whatever cringeworthy missteps they've made in the past tend to get shoved to the side when I see them together. Furthermore, Sisters was written by longtime Fey copilot Paula Pell—who was, during her tenure at Saturday Night Live, the brains behind the likes of Bobbi and Marty Culp and Justin Timberlake's restaurant mascots. And finally, I've arrived at a time in my life where it feels like every weird twinge could well be the start of perimenopause, so I am a criminally easy mark for lines like, “We need a little less Forever 21 and a little more Suddenly 42.” So, not what you'd call an impartial observer: I wanted to like, even love, Fey and Poehler's first new film together since they teamed up for 2008's Baby Mama.

Part of the contrived appeal of Sisters is the meta aspect of role-switching between the longtime costars. From SNL to Baby Mama to the Golden Globes—and even, phantomlike, in 2009's Spring Breakdown, in which the part written for Fey ended up being played by Parker Posey—their two personas have always been predictable: Fey is the buttoned-up, rule-bound uptighty, while Poehler is the glinty-eyed, rubber-faced hedonist who at one point or another starts talking like a '90s rapper. Sisters adds a dash of Freaky Friday to the formula with Fey as Kate, a deadbeat former high-school hottie who's now scraping by on what she can make doing possibly illegal dye jobs from her roommate's kitchen and trying to redeem herself in the eyes of her teen daughter. Poehler is her younger sister, Maura, a nurse and general worrywart whose lifelong savior complex has been kicked into high gear by her divorce. In other words, hold on to your hats, 'cause this time it's Fey who gets to talk like a '90s rapper! 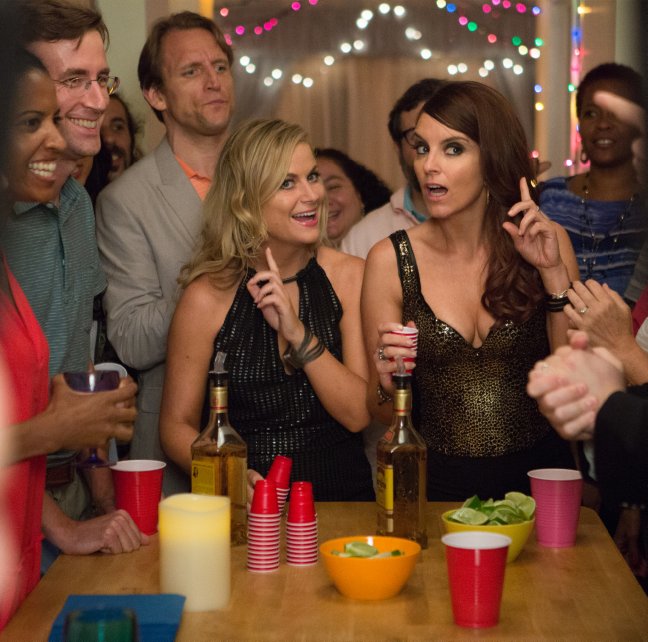 Surprise! Amy Poehler is the uptight one in this film.

Sisters is not what you'd call a plot-driven movie. To nutshell it: The duo's parents (a flawless James Brolin and Dianne Wiest) are downsizing to a condo and putting their suburban-Orlando home on the market. For some reason, the sisters' shared childhood bedroom has remained untouched since high-school graduation, a time capsule of wicker bed frames, Xanadu posters, and economy-sized containers of hair gel. Ignore the fact that their parents are written as the kind who would have turned that room into a home gym the second their kids turned 18: The bedroom is the madeleine that unites Kate and Maura in a harebrained longing to recapture the simpler time of their youth by throwing one last rager. The kicker is that Kate, who'd always counted on her little sister to be the responsible “party mom,” suspends her bad-girl ways for a night so Maura can cut loose.

The party is the centerpiece here, opening up the movie like the overdyed, absurdist prom corsage it's meant to be. The sisters comb through Facebook for likely invitees from their past, a raft of archetypes native to both teen movies and reunion comedies. This makes space for the comic gifts of John Leguizamo (as an aging sleazebag who, as Kate notes, looks “like, underpass weathered.”), Samantha Bee (as one half of That Couple Who Are Still Together and Have Sex in Public), Kate McKinnon (as a butch lesbian with entirely too little screen time relative to her real-life brilliance), and Maya Rudolph (as Kate's high-school nemesis, Brinda). There's drinking. There's property damage. There are a lot of sight gags about penises. And there are botched makeouts between Maura and her handyman crush (Ike Barinholtz) that take the rom-com trope of bumbling love scenes (which Poehler spoofed perfectly in They Came Together) way past cutely klutzy.

Even with some quiet, underplayed moments that capture the unsettling limbo of adulthood deferred, Sisters resists going too deep. It's the kind of broad, wacky laff riot that male stars have been getting away with for decades, but which will undoubtedly be scrutinized in an entirely different way—not just because of Fey and Poehler's stature, but also, inescapably, because of their gender. (If you don't believe me, note the fact that it's already been compared to Bridesmaids, which, hallowed be its name, mainstream critics apparently think is the only funny movie ever made with female leads since time began.) Whether or not Sisters is the best use of Fey's or Poehler's gifts is beside the point; they're entitled to blow off the same dopey steam that propels the likes of Robert De Niro and Blythe Danner in all those Fockers movies.

Likewise, Sisters won't do much to change the minds of people who've already had enough of Fey's and Poehler's brand of carefree-white-comic stylings. There's not quite the level of cringeworthy plot points that piled up on 30 Rock (rape jokes, blackface) or the classism that permeated Baby Mama, but the movie doesn't go out of its way to avoid lazy characterizations, either. Take the fact that the one prominent character of color is Hae Won (Greta Lee), a Korean nail-salon employee and eventual house-party groove commander. It doesn't matter that Lee's deadpan portrayal almost runs off with the movie. (Though John Cena, playing a tight-lipped drug dealer who pulls a perfect Patrick Swayze impression out of his back pocket, is almost as delightful.) Pell and Fey have gone down this road of broad racial characterizations before, and it doesn't look any better now than it did then.

Part of what makes the current era of television so golden is the writers who recognize that there's a vast area between sexy ingenues and salty old ladies with no fucks left to give, an era that's increasingly populated with heroines and antiheroines with faults and complexities that haven't generally been ascribed to women onscreen. The blockbuster-obsessed movie industry, with its ever-more-visible dearth of full female representation both behind and in front of the cameras, isn't quite there yet, but Sisters is a foot in the door. Between the peppy teen snark of Bring It On and the genteel, postmenopausal hijinks of The Best Exotic Marigold Hotel, there is plenty of room for two “dusty old twats”—Kate's term—to let their Spanx down, if Hollywood lets them. In what's hopefully a more feminist future, Sisters will be just one entry in a whole new category: The big dumb party movie that doesn't have to do anything for women other than simply exist.