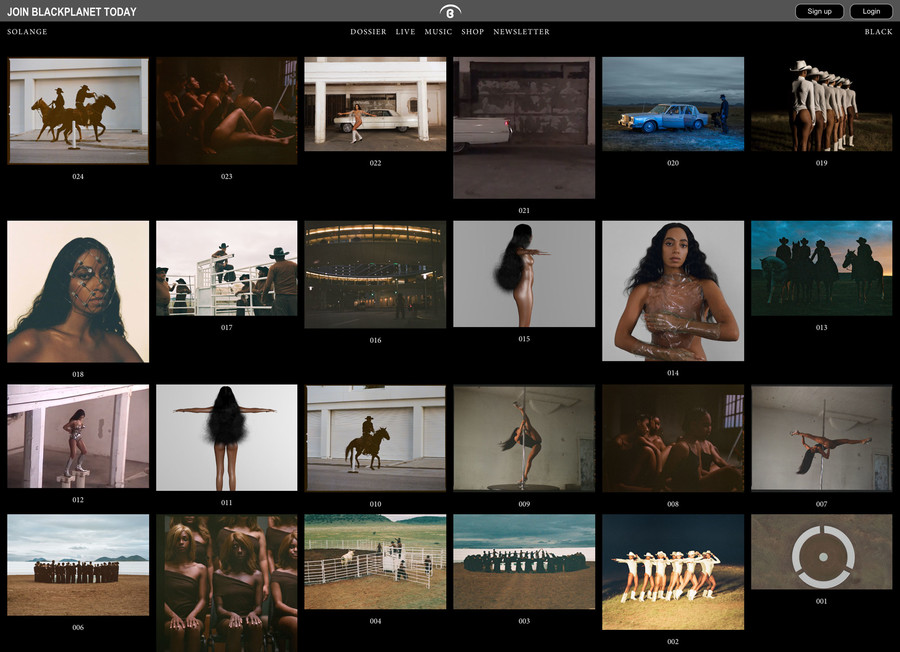 Solange's profile page on BlackPlanet.com during the launch of her latest album, When I Get Home.

When Solange posted teasers of her latest visual album, When I Get Home, on BlackPlanet.com in February, my social media feeds exploded with ecastic posts from fans anxious to know when her album would drop. The previews were striking (one video clip features the singer elegantly suspended from a stripper pole), but fans seemed equally excited that Solange had partnered with the long-running social-networking site—one of the first mainstream social media platforms, in fact—to preview the album.

According to Lula Dualeh, the Audience Development Manager for BlackPlanet.com, Solange first tweeted about BlackPlanet in February 2018, “saying that she wanted to release a song on the site but she couldn’t figure out how to navigate it.” Regardless, Dualeh says, “It was important [to] Solange that she collaborate with a Black-owned platform.” BlackPlanet, which was founded in 1999, remains one of the only social-networking sites created by and for Black Americans and Black people across the diaspora, and that Solange singled it out to promote When I Get Home seemed to hint at a meaningful revival. At The Root, Tanja Renée Stidham wrote, “Imagine landing on Black Planet after it’s been classified as abandoned property for years, uttering the words, “take me to your leader” and Solange motherfucking Knowles glides toward you?” On Twitter, journalist Shanita Hubbard wrote that “#BlackTwitter really helped push this platform to what it is today. I wonder if it’s possible for us to breathe life into BlackPlanet and help catapult it?”

Solange’s album release jump-started a wave of nostalgia for the networking site, and had many past users recalling its role in shaping their early experiences with internet subcultures and the social-media platforms like Twitter and Instagram that have become essential. In his 2006 book, Race, Rhetoric and Technology: Searching for a Higher Ground, scholar Adam J. Banks points out that BlackPlanet served as a blueprint for sites like Friendster and MySpace; in fact, founder Oma Warsow revealed in a 2011 interview that “The guys who started Myspace were quoted in Business Week magazine saying that they looked at BlackPlanet as a model for Myspace and thought there was an opportunity to do a general-market version of what BlackPlanet was.” And yet despite its prescience, the site is rarely name-checked as an influential precursor to social media as we know it today.

Banks writes that the heavy use of Black American and Afro-diasporic dialects used on BlackPlanet was an important means by which users communicated their Blackness to each other, an assurance that the site was a space where they could build relationships through interconnected racial and cultural experiences. It felt affirming, which at the time felt like a singular experience for many Black female users—and, as Hubbard wrote in a recent Elle piece on Solange, still does.

I noted in my last post that early-aughts nostalgia is having a moment, and Solange’s collaboration with BlackPlanet brings a much-needed perspective to that trend. Specifically, it prompts the question of what tech nostalgia might look like from a Black woman’s perspective. What do the strong feelings the site elicits from former users tell us about the evolution of virtual spaces made popular by Black people? How do Black people still create meaningful virtual spaces on platforms that were not made for or by them, and in many places are actively hostile to them? As Hubbard notes in her piece, Twitter and Facebook didn’t invent digital harassment, but “[O]n BlackPlanet, I never experienced the type of venom and misogynoir spewed on newer social media sites. Given the magnitude of reported cases of online racist attacks, many of us now long for a digital community that would at the very least incorporate fast-acting policies to reduce these encounters.”

“Black Twitter” is an oft-cited example of how Black people use the internet and social media in ways that challenge race-based assumptions about digital spaces and their users. Meredith Clark, an assistant professor of media studies at the University of Virginia, points out that “before Black Twitter received its name, its users were simply Black on Twitter. The label ‘Black Twitter,’ in several forms, was initiated as a mockery of early observations of the phenomenon that centered the white gaze[.]” In other words, Black Twitter became a cultural phenomenon precisely because of the assumption that the default Twitter user is white—and because non-Black observers seemed surprised that so many of Twitter’s users were both Black and extremely good at Twitter.

In that sense, Solange’s partnership with BlackPlanet feels like its own homecoming, articulating a desire for virtual spaces made by and for Black users. And while home is an evergreen musical theme, what’s unique in this case is the way that home references a virtual space, one whose unreality would ostensibly make it immune to this kind of nostalgia. When I Get Home makes the case that it shouldn’t be.

How do Black people still create meaningful virtual spaces on platforms that were not made for or by them, and in many places are actively hostile to them?

In her Pitchfork review of the lead single, “Almeda,” Britt Julious described it as “a reinvented ode to the Houston-born chopped ’n’ screwed genre”—a reference to the genre invented by Houston’s DJ Screw that incorporated slowed-down record speeds. “Almeda” borrows from this tradition, overlaying the track with lyrics that ruminate on everyday experiences familiar to her Black fanbase (“These are Black-owned things/ Black faith still can’t be washed away/ Not even in that Florida water”) and adding surrealist visuals that feature performance art referencing Houston’s Third Ward. In the video, Solange and her dancers move through physical spaces in a way that parallels how Black users navigate virtual ones. Both disrupt the presumed whiteness of those spaces and carve out a niche where Black artists and their supporters can claim them without erasure or attack.

When BlackPlanet launched, there was an assumption that the name was a reference to Public Enemy’s 1990 album Fear of a Black Planet. The rumor was never corroborated, but knowing that it existed uncovers an important link between Solange’s marketing strategy and the platform itself. Both projects invoke nostalgia by articulating a desire for a musical era that came before. It might sound strange to identify social media as inherently backward-looking, but that tendency is one reason BlackPlanet was a singular entity: In setting a template for the social-media sites that came after it, it looked to the recent past to make sure that, for example, analog forms of communication like AAVE could flourish in a digital era.

Solange would have been about 15 when the platform launched, but her choice of BlackPlanet as a partner suggests that Black internet users look to their own recent past to reaffirm their claim to the virtual and real worlds of today. It might even serve as a warning shot to the platforms who continually fail to address racism and hate speech, and a reminder that there have been, and will continue to be, other options. And, unquestionably, When I Get Home makes nostalgia powerful fuel for inspiration; it speaks to the Black innovators who once imagined and built a virtual home, and will again.

Read this Next: Black Pride Does Not Mean Anti-White 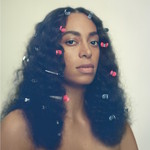 by Vanessa Willoughby
Solange’s new album is a place of comfort and solace.
by Adwoa Afful
View profile »

Writing Between Resistance and Celebration