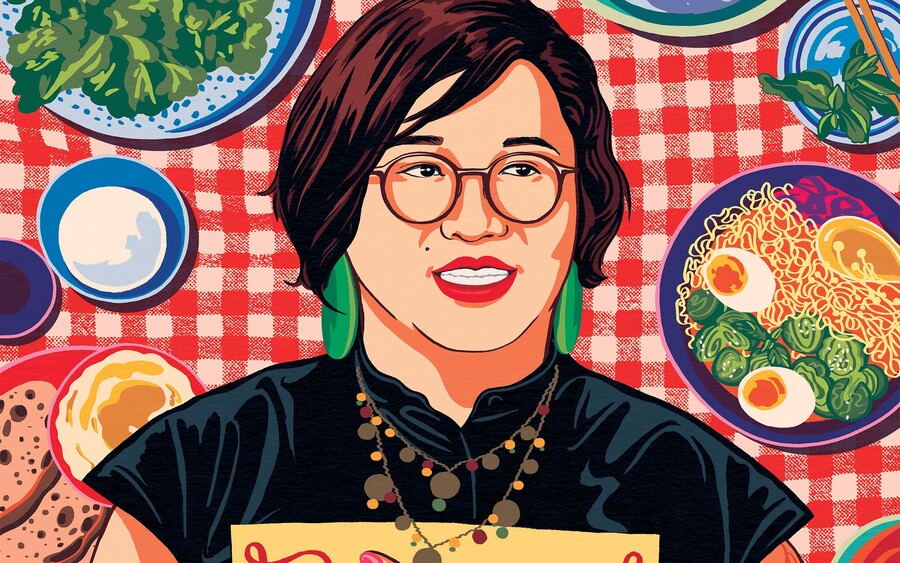 Soleil Ho is too damn humble. After years of working in the restaurant world—doing everything from washing dishes to being an executive chef, freelance writing (including for Bitch Media), and cofounding the podcast Racist Sandwich—Ho officially claimed the role of food writer in 2018 and has shot up Hamilton-style in the two whirlwind years since. In December 2018, the San Francisco Chronicle hired her as its resident restaurant critic, and she’s continued playing a central role in evolving food criticism on an even bigger stage. But if you ask her, her journey is less about accolades and more about ensuring she isn’t “the only one” in the notoriously exclusive food and restaurant space. “The history of food writing in the English-speaking world is not a great one as far as bringing in lots of people,” she said via Zoom from her home in San Francisco. “[When] there was writing about food from communities of color, it was usually through [a] 100 percent white lens. That was a little bit anthropological.”

A 2017 study conducted by Lorraine Chuen of Intersectional Analyst found that 90 percent of cookbooks about Chinese and Indian cuisines listed in the New York Times’s database were written by white people, with that number jumping to 95 percent for books about Vietnamese food. The top 10 bestselling cookbooks of that same year were overwhelmingly written by white people too. “With a media ecosystem dominated by white recipe developers and food writers, the majority of recipes we find in major food publications, whether these recipes are from European or ‘ethnic’ origins, are written by white people,” chef, and food writer Hetty Lui McKinnon told Grub Street in 2020. Ho is helping to turn the tide. I first discovered Ho’s work in 2016 when I found Racist Sandwich on Twitter. Alongside her cohost and cofounder Zahir Janmohamed, she spoke to folks in the food and food-adjacent worlds about everything from cultural appropriation and poverty to ugly food of color (my words). I geeked out when I was invited to be a guest on the podcast in 2017 because no one else was having those types of conversations on otherwise cool food shows like The Sporkful or KCRW’s Good Food.

Looking around at food media in general, it’s clear that Racist Sandwich, which now has different hosts and has been on hiatus since April 2020, left an indelible mark. “We were having conversations that challenged me intellectually and emotionally to think about how other people deal with [and think about] food and just exist within the food system,” Ho says. “Having an introduction to media through alt media was integral to that.” Ho is a busy person. A Vietnamese American who grew up in New York City, she worked as an executive chef at a restaurant in Portland, Oregon, and in her mother’s restaurant in Puerto Vallarta, Mexico, before cowriting the culinary graphic novel Meal with Blue Delliquanti in 2018; being selected for the 2019 edition of Best American Food Writing; and being nominated for a James Beard Foundation award for her restaurant criticism. Her Twitter game is also very strong. But a lot of folks discovered Ho through the San Francisco Chronicle, especially because she replaced the white dude who had held the spot for 32 years, kicking off her tenure by eliminating the newspaper’s star rating system. 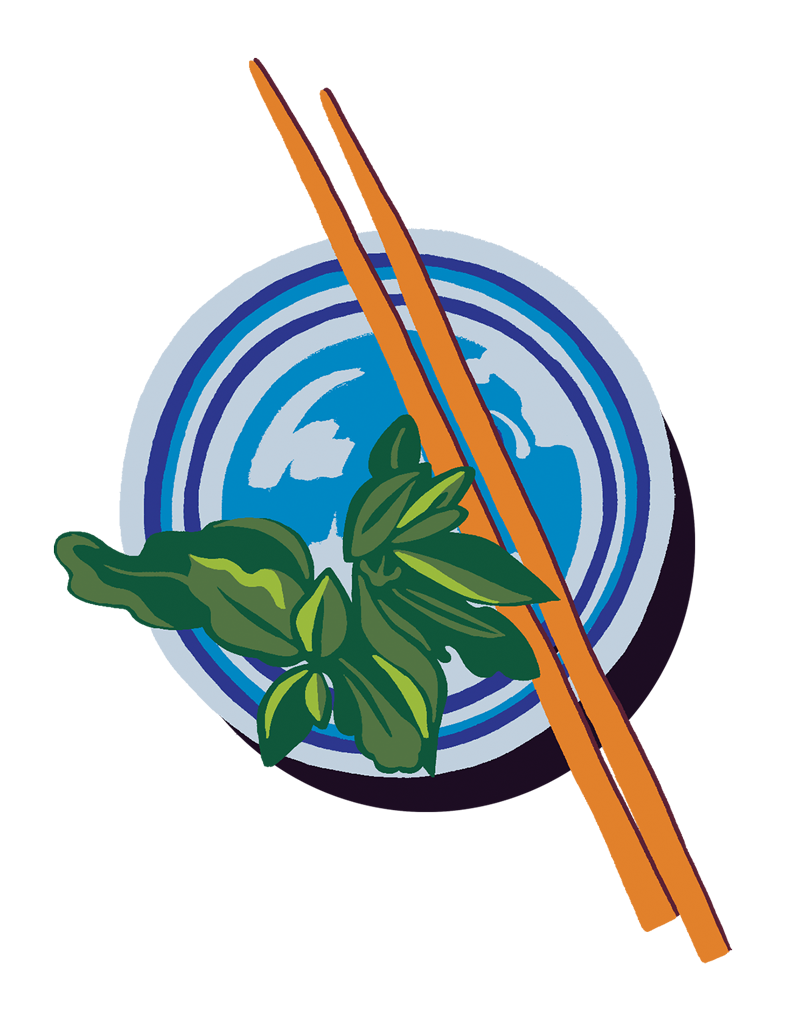 “Since I plan to write reviews of everything notable that I find in the Bay Area, from disappointing tortas to avant-garde collard greens to molecular bánh mì, I believe imposing a star rating system that purports to put all of those things along the same spectrum would do a disservice to all of them,” she wrote at the time. This hyperawareness of how a critic’s subjectivity should be considered when weighing the relative fate of a restaurant was refreshing and got a lot of people talking. “One thing that I found really fascinating about taking on this role [at the San Francisco Chronicle] is that there’s the external sort of perception of ‘this is the first one,’ and we do this all the time, right, like the first Black director to win an Oscar, and it’s awful,” she said. “It’s so strange to be appreciated for what you are versus what you do. That is not a world-shaking observation, but I’ve never been seen in that way before last year, and it was unsettling.”

Ho doesn’t take her position lightly; she uses it to call everything about her industry into question. For instance, in an October 2020 San Francisco Chronicle article titled “Ethical Grocery Shopping Was Never the Answer Anyway,” she examined the inner conflicts of “ethical” food consumers as exercises in futility that may distract from the larger work of fighting systemic exploitation. “In fact, for those who would profit from the ways things are now, that sense of fatigue, of individual moral confusion, allows inequities to continue unhampered,” she wrote. She then directed readers to support several labor-rights organizations created by and for food workers. While Ho is singularly prolific, she has also been an integral part of a wider shift within the food and restaurant industry toward paying closer attention to the perspectives of queer and millennial bipoc food writers, including Tejal Rao at the New York Times and James Beard Award winner Mayukh Sen who are questioning and challenging the status quo of food writing.

Like any visible groundswell toward diversity, the conversations BIPOC food writers are having aren’t new; they’re the culmination of generations of organizing and activism. “The people in labor [and] in the fields who have been asking these questions and trying to figure out how to organize and improve the food system [are] not generally part of the conversation,” Ho said. “That’s why you get this sort of existential hand-wringing over choice on the consumer end of things because that is the lens through which most of these writers are operating, not [a] working class–centered lens.” Instead of all the hand-wringing, Ho pushes consumers to ask organizers, “What do [you] need? What do [you] want? That is refreshingly simple, actually. Just follow their directions, and you can help them.” Ho asks herself many of these same questions when writing about issues that might not directly affect her, like her September 2019 piece on accessibility in dining, where she encourages able-bodied readers to report Americans with Disabilities Act violations at restaurants, and to say, “‘Hey, I want to bring my friend here, but I know that they can’t access this place. What should we do?’ Having an active voice in this really matters.”

While Soleil Ho is singularly prolific, she has also been an integral part of a wider shift within the food and restaurant industry toward paying closer attention to the perspectives of queer and millennial BIPOC food writers.

“A really important part of not only just being a writer but also an editor is [asking] those questions preemptively and thinking, how do I bring in writers who understand that implicitly or explicitly and really bring more into this frame?” As a travel writer who dabbles in food talking to a food writer who dabbles in travel, I asked Ho why she thinks these leisure-centric genres require such a big shove forward. What does it mean to get paid to eat and travel when so many struggle to do both? “Constantly asking the question ‘Why does it have to be this way?’ will bring us a little bit closer to a more equitable writing industry,” she said, “But at the same time, we’re facing this dire collapse of media, and we see it every fourth quarter, essentially. The venues for doing that kind of work”—of asking the bigger questions—“are shrinking.”

While mastheads continue to diversify and think pieces get spicier, Ho still worries about whether these efforts will have a lasting impact on the broader restaurant industry, especially after the food media’s year of controversy. While Bon Appétit is still recovering after 10 of its Test Kitchen stars exited their video contracts over racial and gender pay disparities, and its editor-in-chief resigned after an image of him in brownface resurfaced online, the L.A. Times’s appears to be suggesting the status quo by maintaining that critic Patricia Escárcega’s pay discrimination complaint is unwarranted, though she’s paid less than her counterpart. While she awaited their decision, the L.A. Times’ food editor Peter Meehan resigned following accusations of creating a hostile work environment, verbally abusing his writers, and sexually harassing his coworkers. “White supremacy, like heteropatriarchy, evolves,” Ho says. “They don’t disappear, they just change their names and change their outfits and appear as something totally new, but it’s the same thing underneath.” Two steps forward, one step back. “We are seeing a little bit of change, but…it will take a lot of shifting and a lot of people at the top really changing what their roles are and how they’re going to be empowered to make things better.”

Now that she’s getting to “the top,” we can see that there’s more than just a small sea change happening. Ho seems to work nonstop to share resources, build relationships, and leave the door wide open behind her to ensure she’s not the only one in the spaces she enters—from organizing retreats for folks of color in the food world to creating networks of BIWOC food writers. And yet, she remains too damn humble. When I asked Ho who her literary ancestors are—food writers who came before her that opened gateways for her—she couldn’t name one. “We’re in this moment now where there are more different people participating in this,” she says. “And for the people who will be doing this in 50 years, if the earth still exists in 50 years, they’ll have a much better answer to that question.” Ho will be well on her way to being a literary ancestor herself by then, so what of her legacy-in-the-making, of being the first of her kind at the Chronicle? “I hope I’m not only remembered as the first Asian American restaurant critic at the Chronicle,” Ho says. “I hope there’s more to it than that.”