Some of Us Are Brave: Killing the Mammy Myth | Bitch Media

Some of Us Are Brave: Killing the Mammy MythSheaMoisture Needs a Reminder that Black Women Built Its Success 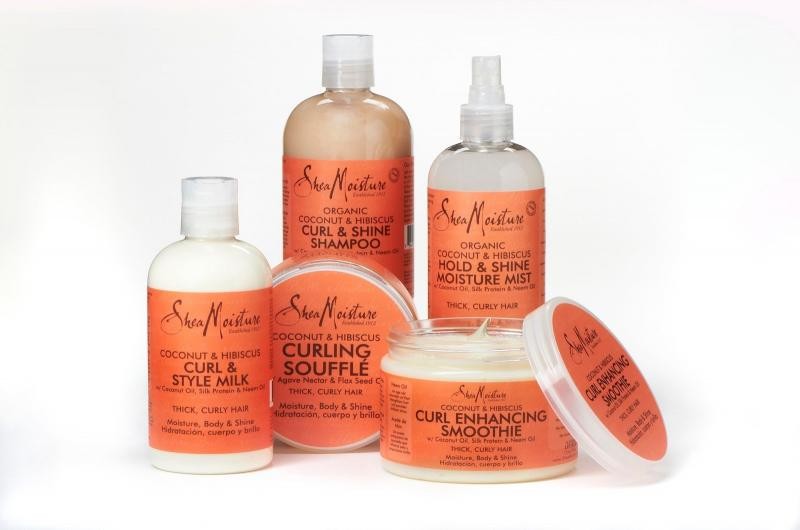 I don’t mean that in the Chris Brown or Pastor Jamal Bryant-endorsed fuckboy way. I mean that for too long Black women have been weighed down by societal expectations that we give our unconditional loyalty to everyone and everything—even when that allegiance comes at the expense of our own needs, health, and happiness.

It is an effect of the Mammy stereotype, created to abet the exploitation of enslaved Black women in antebellum America. These women, it was said, were not just happy to serve their white families, but were born to do so. They had no needs besides loyally tending to others’ needs. This blueprint for being has followed Black women from slavery through the Civil Rights Era to today. But we’re pushing back. Black women are human beings, not “man’s best friend,” and our faithfulness needs to be earned.

SheaMoisture—a hair and skincare brand whose early success was buoyed by Black female customers and the natural hair movement—learned this lesson the hard way last month.

Founded in 1991 by Liberian immigrants and rooted in the beauty wisdom of Sofi Tucker, a Sierra Leonean entrepreneur, SheaMoisture became a favorite brand among Black women newly embracing their natural hair texture. Not only did the company offer products that were healthy for many Black women’s hair, but it also celebrated and centered Black beauty in its advertising. This alone was revelatory.

Then as now, Black women who opted to unapologetically wear our curls, kinks, and naps unstraightened were pushing back against hundreds of years of beauty standards that say highly-textured hair is unsightly and in need of fixing. Most mainstream haircare companies advertise their products by promising the long, fine, straight, silky tresses associated with white women. Primetime L’Oreal commercials don’t feature sisters tossing their locs and shaking their ‘fros. Though Black women spend an estimated $7.5 billion annually on beauty products—more than white women on cosmetics and skincare, we have remained largely underserved by the industry, our unique looks marginalized and our needs ancillary.

SheaMoisture, like several other Black-owned brands that emerged during the Black hair renaissance, was different. And so, Black women remained loyal to SheaMoisture, even when parent company Sundial Brands brought in Bain Capital (Yes, that Bain Capital) as a minority, non-controlling investor in 2015.

But over the next year, some Black women claimed that SheaMoisture products no longer worked as well on their hair and that product ingredients had been changed to reach a wider market. (Sundial denies this.) Then, in April the brand released a promotional video that heavily featured white and biracial women and decentered brown-skinned, kinky-haired Black women. To add insult to injury, the ad conflated a white woman’s displeasure with her red hair to Black women’s battles to accept their natural hair amid systemic racism. As if displeasure can be compared to the 11th U.S. Circuit Court of Appeals ruling that it is fine for employers to ban locs, a common style worn by Black women who do not wish to straighten their hair. The Court has not, as yet, allowed the banning of gingers.

The video caused a furore among many of Shea Moisture’s Black female users, who took to social media to register their displeasure.

The outcry was so vehement that SheaMoisture pulled the video and issued an apology on its Facebook page that said, in part, “While this campaign included several different videos showing different ethnicities and hair types to demonstrate the breadth and depth of each individual’s hair journey, we must absolutely ensure moving forward that our community is well-represented in each one so that the women who have led this movement never feel that their hair journey is minimized in any way.”

Yet, the adverse response from Black women created its own backlash that cast us as petty, opponents to inclusion, rather than discerning consumers. 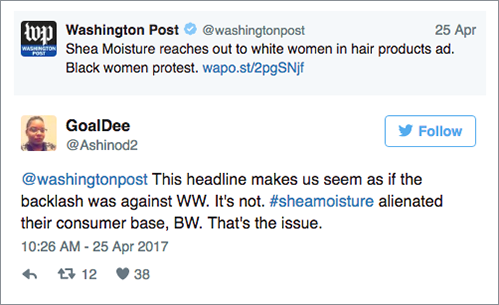 The debate even gained the attention of Tariq Nasheed, a social commentator known for his misogynoir. And Shea Moisture, again, a company that owes its success to Black female consumers, happily endorsed Nasheed’s point of view, praised his loyalty and called him “wonderful.” 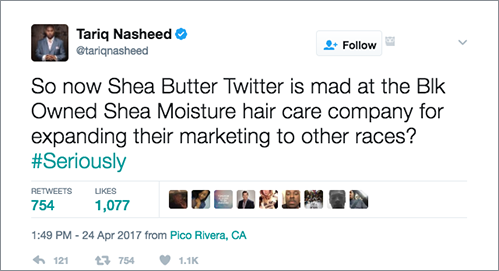 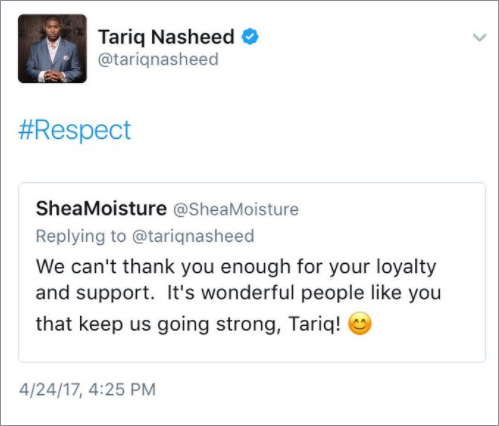 Black women’s uncomplaining fealty is so taken for granted that Black women are expected to operate outside the basic tenets of America’s one true religion—capitalism. We alone are supposed to reward brands with our dollars whether or not they target or value us as consumers. The free market isn’t supposed to be for the likes of us.

The irony of this situation is that SheaMoisture created the now-infamous ad to woo a non-Black customer base—namely white women. No one expects these women to purchase beauty products that do not center them. A brand has to demonstrate that it recognizes and and can fulfill white women’s beauty needs. A brand has to respect white women enough to make them a significant part of its marketing. It cannot, say, retweet the author of The Art of Mackin’, “the first book that tells men what to say, word for word, in order to get sex from women,” and call him “wonderful” as it did in defense from Black female customer complaints because Shea Moisture knows it needs to earn white women’s loyalty.

Black women, though, are maligned for demanding treatment other people take for granted.

The Mammy myth that casts Black women as faithful servants is about four centuries past its expiration date. Too many Black women have already starved our needs and desires trying to serve people, organizations, communities and businesses who will not serve us. We should not be ignored—not even by the folks who make the products we use to coiff fly twist outs. And we should not be loyal. Except to those that earn it. 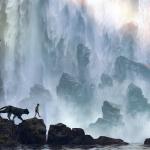 by Soleil Ho
Over its many iterations, Rudyard Kipling’s story has positioned Mowgli as a God or a conflicted child. The new Disney version seeks a harmonious message.