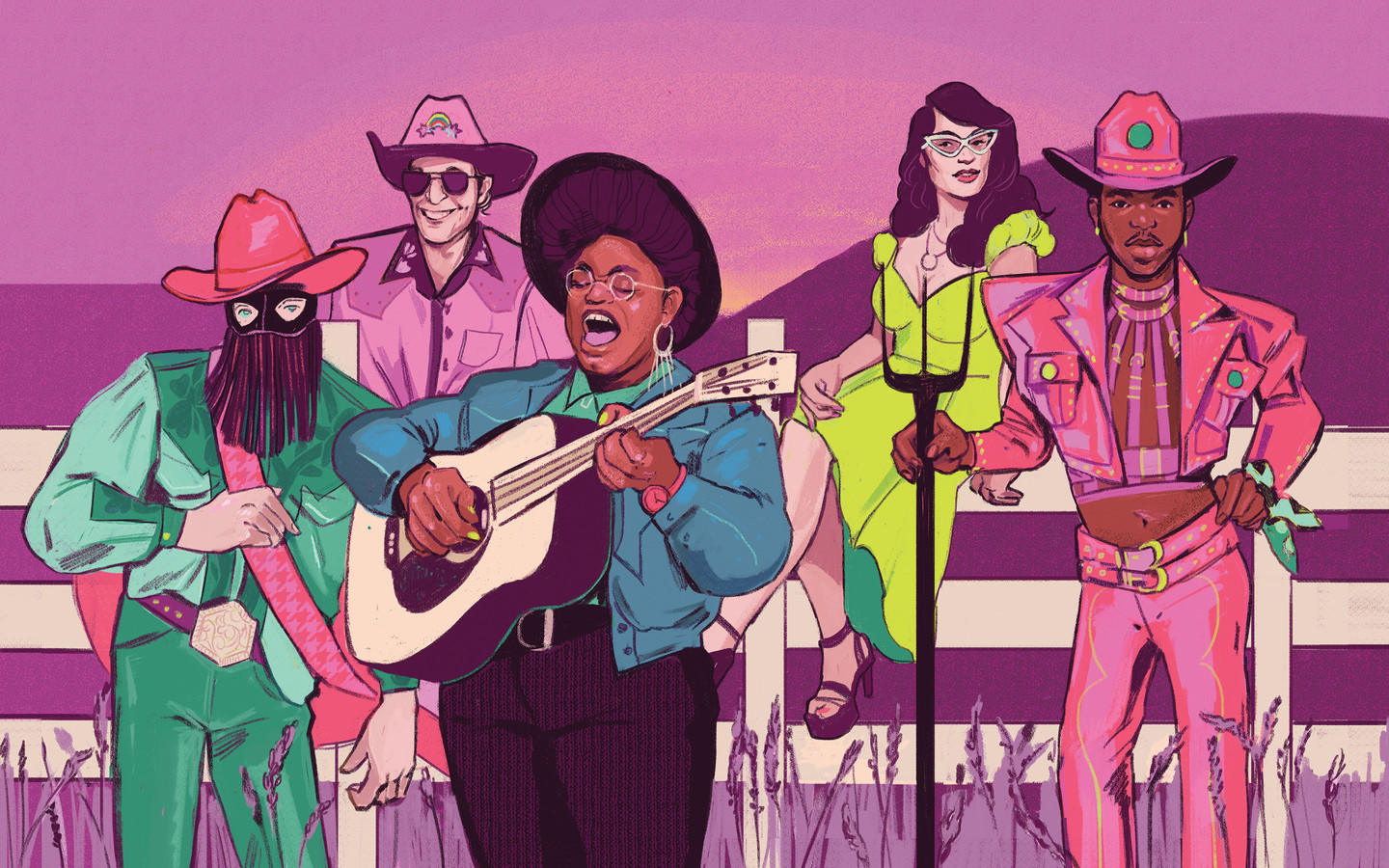 One particular moment stood out when The Highwomen—an all-star project featuring Brandi Carlile, Amanda Shires, Natalie Hemby, and Maren Morris—debuted at the 2019 Newport Folk Festival in Rhode Island. Carlile, a queer Grammy-winning singer-songwriter and producer, introduced the group’s song “If She Ever Leaves Me,” a sweet, sly homage to a pair of women who prefer perfume to cologne, as “the first gay country song.” Though the crowd whooped in response, Carlile got one thing wrong. Queer country artists have been making their voices known for decades, stretching back to the 1970s (and depending on how you read Vernon Dalhart’s banned-from-the-radio 1939 tune, “Lavender Cowboy,” much earlier).

As Willie Nelson sang in 2006 when he covered Latin country musician Ned Sublette’s 1981 hit, “Cowboys Are Frequently Secretly Fond of Each Other,” “What did you think all them saddles and boots was about?” “There is so much in country music for us to draw on,” Karen Pittelman, who fronts Karen & the Sorrows, says. “There’s a tradition of powerfully grappling with gender and sexuality ever since Kitty Wells’s callout that it wasn’t God who made honky-tonk angels. There are men weeping and wearing rhinestones. There are women getting in fistfights, singing about birth control, and murdering their abusers. There’s this call to be true to yourself, no matter what anyone else says.”

In 1973, gay activist Patrick Haggerty heeded that call, and he and his band, Lavender Country, released a self-titled 10-song collection now lionized as the world’s first openly gay country album. The album only sold 1,000 copies: As Haggerty told Pitchfork in 2014, “At the time, it was very clear that no genre was going to have anything to do with what we wanted Lavender Country to say, and that we were going to have to do it ourselves.” The band ceased playing in 1976, and the album languished in obscurity until 1999, when the Journal of Country Music featured Haggerty in a piece on gay country musicians. Lavender Country reunited, saw the album officially archived in the Country Music Hall of Fame as the first known gay country music recording, and hooked up with independent label Paradise of Bachelors to rerelease the album in 2014. In 2019, Haggerty released a brand-new album, Blackberry Rose and Other Songs and Sorrows from Lavender Country.

The world is a lot different now than it was back when Haggerty was writing sad queer country songs. In the 1980s, singer-songwriter k.d. lang won her first Grammy for a duet with country legend Roy Orbison and collaborated with icons Loretta Lynn, Kitty Wells, and Brenda Lee on “Honky Tonk Angels’ Medley.” But the country establishment never really accepted her, and they turned on her altogether when she released a pop album and came out as a lesbian in 1992. Later in the ’90s, the rise of Lilith Fair and acts like the Indigo Girls, Mary Gauthier, and Tracy Chapman, as well as the formation of the Lesbian and Gay Country Music Association, fueled a folk revival, but the dam really broke in the 2010s when mainstream country artists Chely Wright, Ty Herndon, Brandon Stansell, and perhaps most notably, Brandy Clark, came out and became open about the challenges they’ve faced as queer artists. (Blockbuster songwriter Shane McAnally has never hidden his sexuality while penning some of country’s biggest hits. He, Clark, and Kacey Musgraves cowrote the latter’s 2013 song “Follow Your Arrow,” which pushed the conversation around queer representation in country into a broader spotlight.)

Now, subversive young artists such as Amythyst Kiah, Orville Peck, Little Bandit, and Lil Nas X are discarding country music’s conservative stereotypes around race, gender, and sexuality to find their own versions of success. And, on the indie side, a burgeoning queer country scene has coalesced around bands such as Sarah Shook & the Disarmers, My Gay Banjo, Eli Conley, The Paisley Fields, Sam Gleaves, and Karen & the Sorrows. Though Pittelman has become a standard-bearer for queer country community-building with her ongoing Gay Ole Opry Festival and the Queer Country Quarterly, she says more queer representation can’t be the only goal. “I don’t think we can understand why it’s been difficult for queer country artists without understanding first how and why country music has been used to help keep white supremacy in place,” Pittelman says. “Until we confront that history, there may be a few more recognizably out queer people in country music, but we won’t have really changed anything.”

Cindy Emch, editorial director of the music and culture website Country Queer and lead singer of the Secret Emchy Society, has been called “the first lady of queer country” for a reason—she’s been fighting the good fight for decades. “There’s been a really successful marketing campaign by conservative politicians to co-opt country music as ‘theirs’ and representative of ‘family values’ and the ‘heartland’—all things that make a lot of us feel left out and like the music isn’t for us,” she says. “The whole red cup/big truck side of country music is often the soundtrack to the bullying that rural queer kids experience growing up, so reclaiming our rightful place as queer country musicians is also about reclaiming our rightful place in our own homes, the places we grew up, and the places we felt forced out of.”

As Dale Geist, Country Queer’s publisher, lays out simply, “The very best things we can do are to engage in community-building and visibility. So that’s Carlile making a point of talking about her marriage and family, Pittelman putting on a Queer Country Quarterly in Brooklyn, [and] queer country panels at Americana Fest—it’s anybody who understands the importance of queer visibility and community doing their part to move it forward, [and who understands that] it’s all one struggle: the liberation of country music.” It’s a crying shame that Pittelman and the other queer artists who’ve come before her and who stand beside her now are so well-versed in loving something that doesn’t always love them back.

“It’s a special kind of heartbreak to realize that the music and the culture around the music doesn’t see you, doesn’t think your truth is worth telling,” Pittelman says. “That it may even be used to support policies and prop up beliefs that put you or your loved ones in danger. And yet, those songs are still there in your bones. You can try to cut them out of your body. Or you can try to reclaim them, to take them back, to find a way to bend their notes until they tell your story too.” And as Haggerty first sang way back when, “You all come out, come out, my dears/ To Lavender Country/ Sashay out and give our way a try/ Whether you tuck in or dangle/ When you hear that glad gay tango/ You’ll just spread your spangled wings and fly.”