Fighting for the Future | Bitch Media 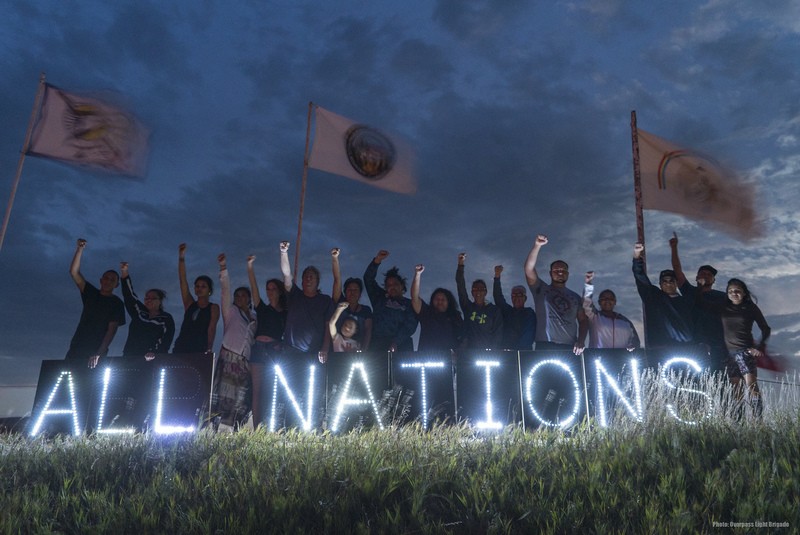 Representatives of over 100 tribes have gathered in North Dakota for the protest to stop the construction of the Dakota Access Pipeline. Photo by Joe Brusky (Creative Commons).

Last Friday, under the heavy rain of an afternoon thunderstorm, hundreds of people gathered with umbrellas and sweatshirts on the front lawn of the North Dakota State Capitol in Bismarck. “I stand before you as a youth, as a woman, as a lifegiver,” Jasilyn Charger yelled into a bullhorn in the pouring rain as state troopers in riot helmets looked on. “Right now we are fighting for our very lives, for our children, for the lives of those who are not yet born, for the lives of all the men and women who are not here today, who have fallen, for our ancestors.” The crowd cheered in solidarity; they had just heard, with dismay, that Judge James Boasberg had ruled against their request for a temporary injunction to halt construction on the Dakota Access Pipeline (DAPL).

Charger is from the Cheyenne River Sioux Tribe, just south of Standing Rock. A member of the International Indigenous Youth Council, she worked against the Keystone XL pipeline last year, which would have crossed her reservation. Now, she is a leader of the youth movement here. “Immediately I had to help; immediately I felt their pain. I knew what they were going to go through. I knew the fight, that it was going to be long and hard, and that they needed their youth to be in front of it,” she told me later. Caro Gonzales, a youth leader from the Chemehuevi Nation who spoke at the rally and stood for hours holding the bullhorn for other speakers, echoed this idea when they said, “Everybody says our youth is our future. Well you know what, we’re here right now, our future is right now, and we’ve got to be fighting for it.”

Yet only minutes after the judge’s decision, word spread of an unusual joint statement released by the Department of the Interior, Department of Justice, and the Army. The federal agencies countered the judge’s decision and said they would halt construction of the pipeline until the Standing Rock Sioux’s concerns could be more fully addressed. In an unprecedented move, their decision also moved to reassess and improve how governments and corporations consult with tribal governments. The mood on the field turned celebratory, and the crowds broke into song and dance, while, almost as if choreographed, the thunderstorm passed and the clouds dissipated. 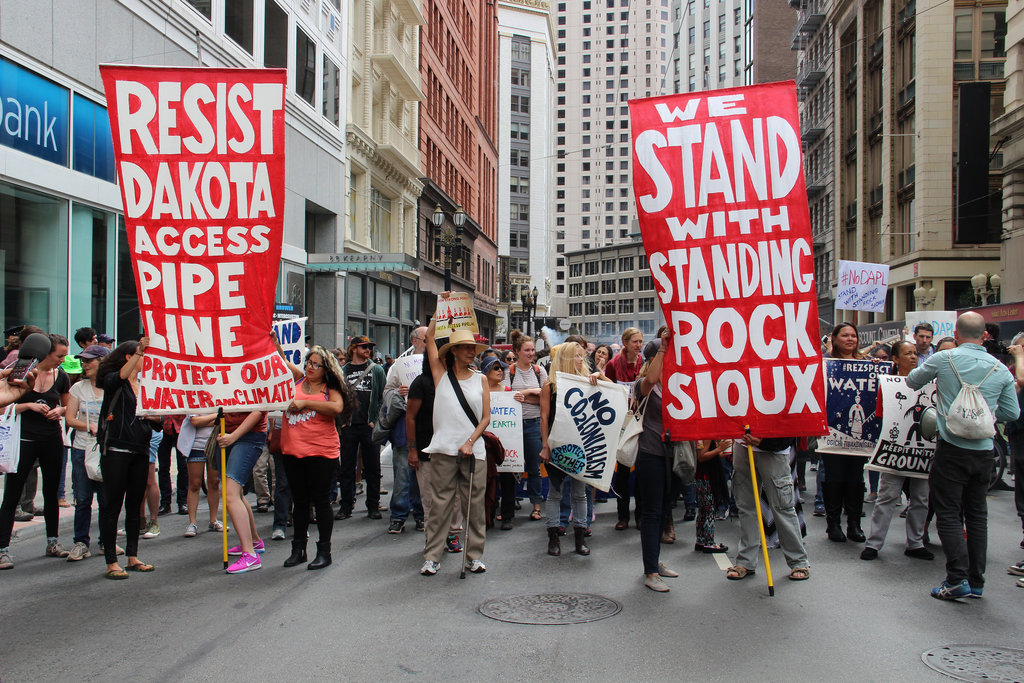 Because the joint statement is not legally binding, the water protectors urge only cautious celebration. They will work to hold the government to its word, but emphasize that the real successes here are the historic levels of momentum and solidarity galvanized by the movement, and that this is only the beginning of what it can achieve. Looking out across the crowds celebrating on the lawn, LaDonna Brave Bull Allard, founder of the Sacred Stone Camp and an enrolled member of the Standing Rock Sioux tribe, shook her head in wonder and told me, “I see amazing things happening here. I see amazing things. We’ve only just begun.”

The evening before the rally, I spoke with Kandi Mosset of the Indigenous Environmental Network. She is Mandan, Hidatsa, and Arikara, and the land in question is the traditional territory of her ancestors. On a hill overlooking the Red Warrior and Sacred Stone camps, she said, “It gives me goosebumps every time I think about the significance of this gathering, with all these different tribes. It just makes me want to cry, the beauty of it.”

“We’re setting precedents in this country around Native Americans finally being heard, because, you know, we never went anywhere,” Mossett says. “For over 500 years, we’ve been screaming the same thing about capitalism, and colonization, and the greed, and the taking of the earth and how it was going to come back to get us, and now it is.” In fact, she explains, the history of environmental mismanagement on these lands is inseparable from the history of colonization and land appropriation. Lake Oahe, under which the pipeline would bore, was created in the late 1940s along with four other large dams, largely as flood control for cities like St. Louis. Yet flood control was necessary only because the U.S. Army Corps of Engineers had previously removed the Missouri River’s natural flood controls, its marshes and wetlands. Every one of the five reservoirs forced the relocation of hundreds of people without their consent and flooded some of the most fertile agricultural lands in the area. 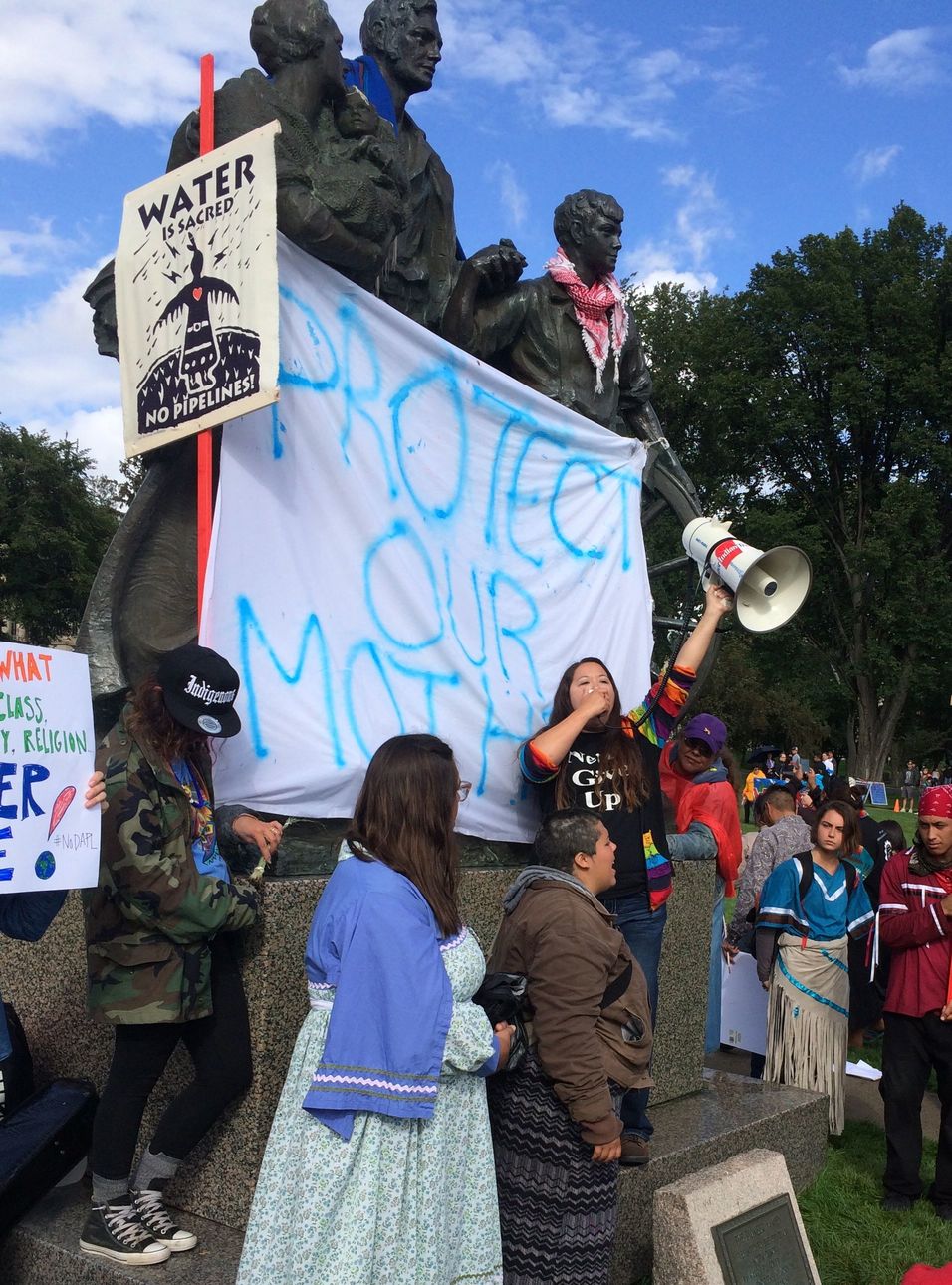 Mosset of the Indigenous Environmental Network, wiedling a mighty megaphone after the announcement of the federal decision to halt construction of the pipeline. Photo by Vivian Underhill.

Sharon White Bear, of the Arikara Nation, told me her parents were teenagers when they were forced from their homes when Lake Sakakawea (the reservoir to the north of Lake Oahe) was flooded in 1956. “Some of our soldiers went to war, and when they came home, their home was gone because it was under—we call it The Bottom now.” They stand in solidarity with the Standing Rock Sioux, she said, because “we know what this water means. A long time ago, my grandfather was born in the 1800s, and when he got older, we would take him to the river, and he would always say to us, ‘Make sure you take care of this water. You protect it.’ That’s why we stand here today.”

Many noted that their work here arose from their own lived experiences and carried personal meaning far beyond the pipeline itself. Allard told me, “I am not an activist. I am not anything but a grandma, that’s the first thing I tell anyone. But what happened was, when someone pushes you back against the wall, what you gotta do is take one step forward. And face the storm.” She continues, “My son is buried on top of that hill, across from where Dakota Access is putting its pipeline. Any mother will tell you that is a hard thing, to lose a child, but I cannot allow them to desecrate my son’s grave. I truly believe in what I am doing. I am ready to give everything—my life—to protect the water.”

Gonzales told me that for them, this struggle also means honoring their experience as a two-spirit person and pushing back against the misogyny and transmisogyny they experience. “For me, being sacred in my body and in my soul, that gives me the ability to step where I need to be stepping and acting where I need to take action because I’m queer. That gives me the special knowledge and wisdom to be able to do what I do.”

Gonzales emphasized that this work is also a rallying point for other social justice issues too. “Not only am I a woman,” they said, “but I’m an indigenous woman. All those intersections, they all impact me, and they make me a better leader. Because I’m able to understand solidarity and people power because I have all those compounding interlocking oppressions.” 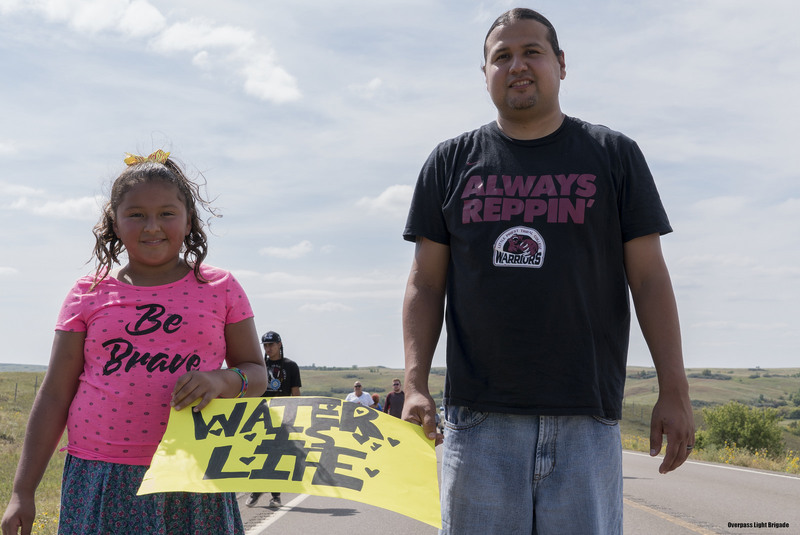 A march at the Sacred Stone camp. Photo by Joe Brusky (Creative Commons).

Jasilyn Charger noted that she is bisexual. “I am bringing back my culture. I am bringing back our sacredness as well. Even in our own culture, we are shunned, even though it was a part of our culture before the colonists came. When the colonists came, the first people they took out of our camps were the two-spirited because they were abominations.”

Gonzales, Charger, and others also noted the intersections between their environmental concerns and gendered and sexual violence. Mary Kathryn Nagle, who is an enrolled citizen of the Cherokee Nation of Oklahoma and a partner at Pipestem Law in Tulsa, noted the connections between the sexual violence of colonization and present-day resource extraction. “We as Native women know that any time a corporation or a government is trying to conquer our lands and our water, Native women’s lives and bodies will suffer. And that’s been the case since 1492. We know that—from Columbus to the Sand Creek Massacre—part of the war that was perpetrated on these lands was a specific attack on Native women, because the U.S. military and other governments that were attempting to conquer the land understood that the way you destroy a nation is you destroy its women.”

Furthermore, she added, “Statistics have shown that with the increased rates of extraction of oil in the Bakken Region [source of the DAPL oil], the rates of violence —sex trafficking, violence, rape, murder—have increased. What has not increased is the federal or state governments’ reaction to policing these crimes.”

The water protectors plan to stay until January 1, and longer if necessary, to ensure that construction stops. Meanwhile, noting that threats like the DAPL will never fully end while there is a demand for oil and gas, speakers at the Red Warrior Camp on Friday evening and Saturday morning began to outline plans to address the root causes of the pipeline. These included both personal and organizational divestment from the banks that fund the pipeline (which include Bank of America, Goldman Sachs, Wells Fargo, and JPMorgan Chase, among others) and discussions about alternative energy options.

“We are learning from this experience; we are rising from this dilemma; we are using it to our strengths,” Charger said. “Without the pipeline, we would all not be here. We don’t see this as something bad; we see it as a challenge that we as indigenous people have to hurdle together.” Beyond any judicial or executive action, that is cause for celebration. 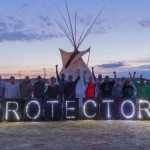 by Vivian Underhill
The Standing Sioux's pipeline protest is part of a long history of indigenous-led environmental protests.