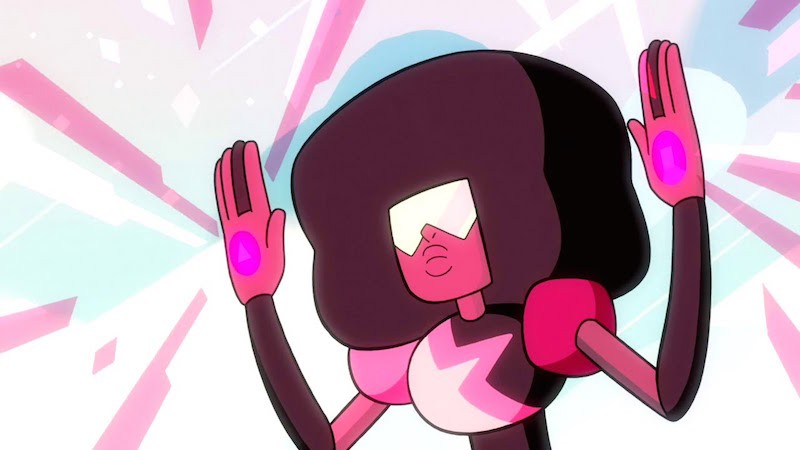 Garnet is one of the Gems on Steven Universe.

Did you hear that there might finally be a lesbian couple in a Pixar movie? Sure, it’ll be a brief appearance, but as Pixar and its parent company Disney still approach nonheterosexual relationship portrayals with kid gloves (e.g. Frozen’s Oaken and the antelopes in Zootopia), it’s easy to applaud the news. The world’s second-largest media conglomerate can and does affect social change, or at least provides the avatars for it. But while Disney films are dipping their toe into queer territory, animated kids’ shows have been breaking ground for several years by including queer subtexts, flirtations, and romances. Nickelodeon’s The Legend of Korra features two main female characters falling in love, Cartoon Network’s Adventure Time has the long-simmering (though contested) relationship between Princess Bubblegum and Marceline, and even Disney XD’s own Gravity Falls showed two male characters proclaiming their love for each other.

And then there’s Steven Universe, the animated series created in 2013 by former Adventure Time writer and storyboard artist Rebecca Sugar—the first woman to create and run a Cartoon Network show. The show is a sparkly, brilliant good time, but it is also a radical vision: A world where fate is determined by women/female-coded pseudo-deities and defenders called Gems, and a protagonist boy fits into (rather than dramatically challenges or upends) this reality. 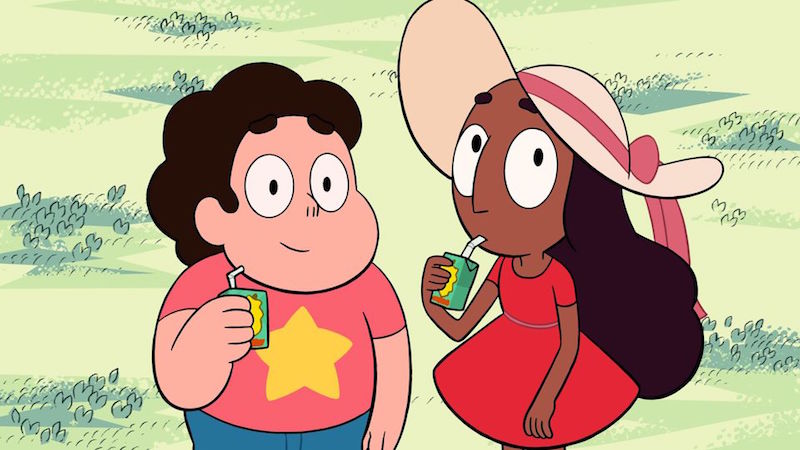 In brief: Steven Universe is a half-human, half-Gem alien boy who lives with three Crystal Gem guardians in a beachy city on the East Coast. His Gem mother had been the leader of a rebellion against the Gem Homeworld; his human father lives nearby and is an active but not dominant participant in his life. While the show started as a supernatural slice-of-life send-up of beach-town culture, it’s evolved into a nuanced critique of gender constructs. The show, which is currently in the midst of its third season, subtly points out how gender norms get in the way of innovative storytelling.

There is nothing that can make a show inherently “female” or “male.” (Something CBS executives could stand to learn.) A show can, however, espouse a gender-dominated worldview through its choice of protagonists, featured themes, and cultural baggage. In Hollywood, cisgender, heterosexual, white men have dominated the screen and the TV and film industry’s every corporate and creative level thanks to historical precedents of shutting out and co-opting other people’s narratives and contributions. (Animation is no exception.) Steven Universe has many men involved in its production and features a lot of men, including its central character. But young Steven is a gateway, a starry-eyed spectator to the spectacular women around him, from Garnet, who is literally the product of a romantic same-sex (same-Gem?) relationship to the mysterious Lapis Lazuli to Steven’s human best friend Connie.

Steven is even different than most boys we see onscreen typically. He’s the physical embodiment of a warm hug. With his disarming charm and genuine affections, viewers are treated to a mainstream example of an endlessly kind boy who is no less weaker for it. There are many annoying but “ultimately endearing” sensitive nerd boys in pop culture—the kind of protagonist whose worth is constantly alluded to but never exemplified by the character himself. Though Steven is introduced in this vein, it becomes obvious that the Steven Universe world is interested in moving beyond that trope. And this extends to the show’s other main male characters, including Steven’s dad, Greg Universe: These dudes grapple with crushes and friendship and, um, conspiracy theories without leaning on heterosexual desire or violence to achieve character development. 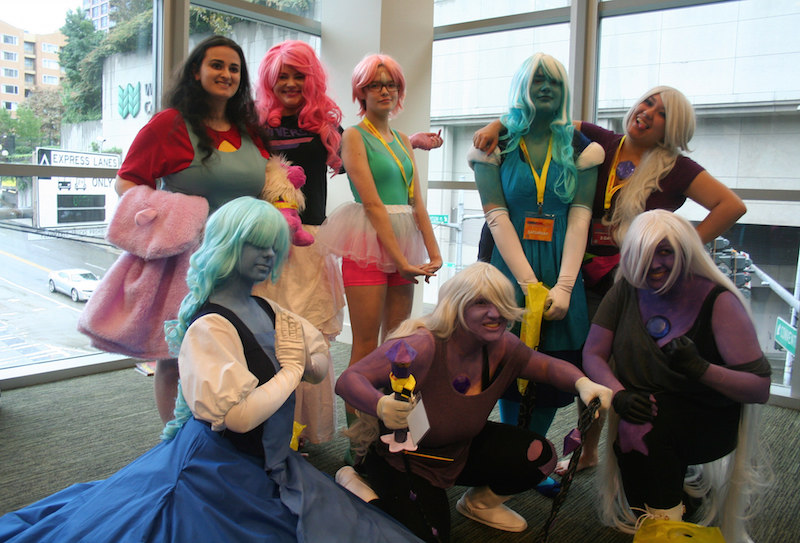 And then the women and Gems! The Gems can do a special thing called “fusion,” in which two (or more!) female-coded Gem bodies dance together to merge into one. This is shown as an intimate and quite gender-challenging process. For example, in an episode where Steven introduces the Crystal Gems to his BFF Connie’s parents, his three/four(?) mothers are forced to fuse together into one motherly simulacrum. The character Garnet is actually a fusion of two Gems—as the episode “The Answer” explains, the Gems Sapphire and Ruby fell in love and discovered they could fuse and create someone entirely new. “It’s one of the sweetest episodes of the series,” writes Teresa Jusino at The Mary Sue. “It’s also one of the most important, as it provides both children and adult fans alike with a wonderful representation of a same-sex relationship.” The Crystal Gems are guardians. But unlike traditional guardians—say, Guardians of the Galaxy—their strength comes not just from a desire to protect but also from tenderness and empathy toward their would-be antagonists. In a recent story arc, the Crystal Gems and Steven are betrayed by a Gem named Peridot. But instead of destroying her, they work to rehabilitate her and, eventually, she joins them. And in the recent episode “Gem Drill,” which premiered on May 12, Steven shields a Gem shard cluster that had been threatening to destroy the Earth after he, well, listened to them and took the time to learn about what they actually wanted. An apocalyptic conflict was defused simply by taking the time to hear out the other side.

In Steven Universe, love is the cure. But women aren’t the only ones doling it out, nor are men merely receiving it as an impetus for self-transformation. Love is the currency of Steven Universe, and it transfers between characters with no regard for gender expectations. Love is also never equated with weakness, and its glowing presence doesn’t mean that the show doesn’t grapple with issues like pending apocalypses, PTSD from abuse, political defection, and smaller-scale (but still important) crises like body image, how to hold on to memories of an absent parent, and social anxiety over public performances. 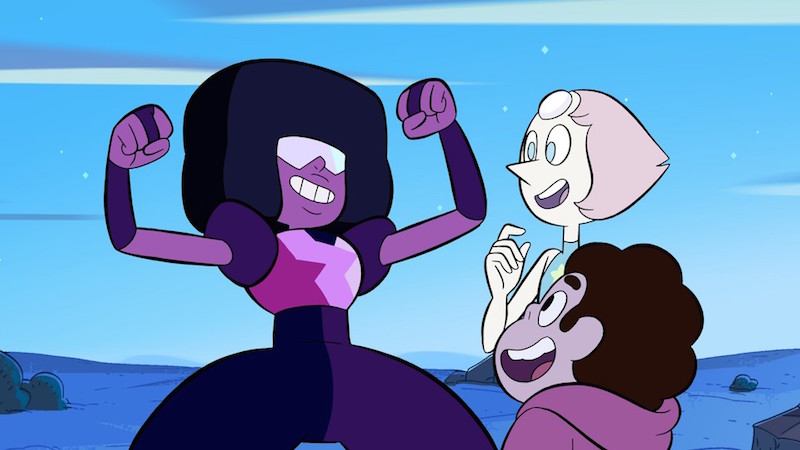 Steven Universe isn’t a perfect show when it comes to its cultural baggage. It bears a lot of weight, since there are so few characters on TV like the diverse and gender-flexible cast of Steven Universe; Rebecca Sugar and her team are operating on a level that most shows never reach. However, it’s clear that they have an interest and a stake in representing and unpacking gender, among other ideas, at a level that kids can process and learn from. Despite ongoing conversations reshaping the very language we use to describe gender, and more and more young figures like Amandla Stenberg and Rowan Blanchard speaking out about queerness, institutional attitudes toward and around gender still have a ways to go. Steven Universe may be a kid’s show on Cartoon Network, but it taps into and reveals one possible outlet for any viewer to learn about gender in a way that most mainstream media, animation or otherwise, still doesn’t touch, let alone explore. Ultimately, that’s the show’s greatest challenge: Not to correct cultural history, but to shape and shine the way into its future.

Very well explained! I do a presentation about general queer representation in children's media which is heavily dominated by negative/harmful portrayals, but Steven Universe and Legend of Korra (along with others) let me show how shows can be made for kids but also include queer stories and education about gender. I always have trouble explaining the premise of Steven Universe cause I feel like I tend to lose the audience around trying to explain the (literal) alien aspect to the gems but you did it very well. Thank you for writing!