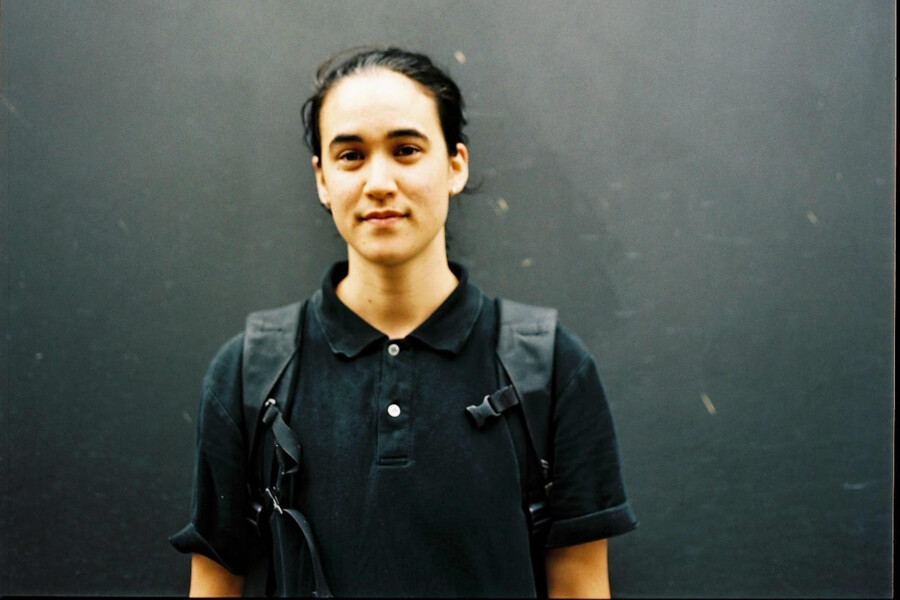 Lee Lai laughs loudly and heartily when I ask her if Stone Fruit, her debut graphic novel, might have a sequel in its future. “No!” she exclaims, releasing another ringing peal. “Can you imagine what would happen next? I can’t!” Unlike me, the 28-year-old cartoonist is happy to leave her characters—girlfriends Ray and Bron, along with Nessie, the incorrigible 6-year-old they parent every so often—exactly where they are at the end of the book. Not that I’m going to spoil the ending for you.

Though she stresses that the story on paper is “very much fiction,” Lai is very open about using her art as a means of exorcising emotional turmoil from her personal life. “In 2017, 2018, I started drawing these characters. I wanted to have a kind of medium for chewing on my own ideas and feelings around childcare and having children,” she tells Bitch via Zoom from her white-walled, plant-filled room in Montreal. “Having a couple of queer aunties who are going through their own shit at same time felt like a good way [to do that].” Over the course of the book, the pair struggle through feeling known, by each other and those around them. Ray clashes with her sister Amanda over care of Nessie, indignant at the apparent lack of trust between them, and Amanda’s uncomfortable, implicit suspicion of Bron’s transness. Bron, in the meanwhile, is looking to repair things with her WASP-y, religious family after a silent period of four years—potentially at the cost of her relationship with Ray.

The result is a shockingly relatable and beautifully illustrated insight into the sticky complications of contemporary relationships between siblings, partners, elders, and youngers. Though Stone Fruit is Lai’s first longform novel, it has already been earmarked by O, the Oprah Magazine as “a book that will change the literary landscape in 2021,” and Fantagraphics, the book’s U.S. publisher, calls it “one of the most sophisticated graphic novel debuts in recent memory.” The most striking aspect of Stone Fruit, in a 236-page tome full of many, are the panels in which Lai’s characters tap into their wild sides: the lines become erratic and aqueous, faces are contorted into feral masks. Reality and fantasy mix in a fluid, blue blur as the humans pictured embrace animal impulses. When I show him, my boyfriend says: “They look like us when we make grilled cheese.”

Bitch spoke with Lai about her devastatingly lucid debut, the allegorical significance of its name, and the roots of its characters, as well as her beginnings and development as an artist.

How would you describe Stone Fruit?

This is my first longform work, and I’m notoriously bad at explaining it. Thankfully, I have a publishing house [that writes] really great copy for what this book is about, but my understanding is that it’s about the disintegration of a relationship and about the familial relationships that open up and begin to draw together as a result [of] that breakup. It’s also about childcare: queers looking after children, and what comes out of that.

Could you situate this work for me in the context of your previous projects?

For one thing, all of my work is very much fiction. I draw from my own experiences in terms of the emotional content, but the empirical events that happen are very much made up to facilitate what I want to explore emotionally. So the throughline [in my work] is it’s all fiction, and it’s always queer characters. There’s a running joke among my friends that it’s not realistic for me to write straight characters, because I don’t know a lot of straight people. [Laughs.] And there’s generally a lot about relationships—or just intimacy in general—being difficult or complicated. Everyone’s pretty messy, while also being really well-intentioned.

What do you think draws you to those themes?

It’s just what I experience around me. I like the fact that most of the people I know, including myself, try really hard [to be good people]. In relationships and in change there’s all sorts of growing pains and mess regardless of our best intentions and despite our staunch values to treat each other with kindness. And that’s interesting to me; those are the stories I like to consume, and they’re the stories I like to write about. 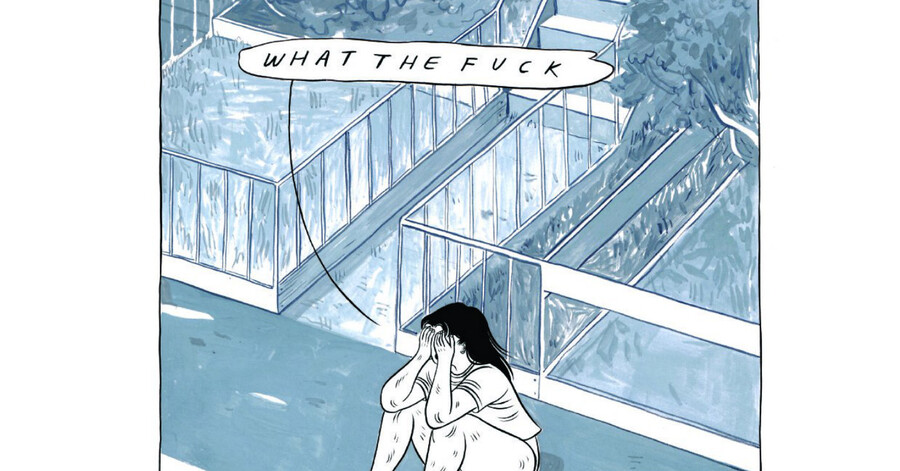 Tell me about the parts of this book where your characters seem to transform into monsters. I found those panels to be really compelling examples of the infectiousness of a child’s enthusiasm for the world.

Before I started writing the book—and this is the case with most projects I do—I [wrote] out little vignettes trying to figure out how to drop an emotional beat in the right way, or build a character in the way I want to. So those monsters were partly just me wanting to loosen up my drawing style and draw something more playful than the sad people sitting around talking. I really liked drawing [those] as well, but you need to change it up a bit!

I wanted some levity, so I started writing these little scenes, play dates between two queer aunties and this screaming and excitable 6-year-old. The first thing I wrote with them turning into monsters was a scene where Auntie Ray is showing Nessie how to eat a roast chicken. You know that they’re humans, but by the end of it they’ve become these feral monsters, tearing away at a carcass. That didn’t end up in the book. It was just one of the warm-up exercises I did to figure out if it was something that would work outside of my head. I got very embarrassed drawing those things because it somehow felt more earnest and fantastical than what I was reckoning for, like what I understood myself to be as an artist.

It does read as very intimate. It reveals a kind of base version of the characters that you can see yourself in as a human, but I also don’t think it’s something I’ve ever read about before.

I grew up on [Hayao] Miyazaki movies, and [they] gave me a new love for monsters as I was going into my teenage life. I thought I’d left it behind in childhood, but apparently I did not!

I drew as soon as I was physically able to. I don’t remember the first time I started drawing, but I remember a feeling of visceral frustration with myself for not being able to draw like I wanted to draw. A child can look at a horse [and see] more or less the same horse that an adult does, but their mechanical ability to make a mark on the page is vastly different. I remember just melting down inside, trying to make it work. I didn’t start taking it seriously, outside of drawing for social brownie points in school, until… I just wasn’t any good at anything else. I went to art school thinking that was what you had to do if you’re artistically inclined and interested in figuring out how to make a living. But it was fine art, highly conceptual, highly modern, a lot of installation and video work, and very serious academic conversations about art that didn’t excite me emotionally. So after those three years I started reading more comics again and decided to give up the idea of highbrow art entirely and make stories that were relatable and (hopefully) easy to understand.

What does the title of the book mean to you?

It’s a cheesy allegory title. There’s a scene in the book where Ray is being sensuously led through this experience of eating a nectarine for the first time by Bron, who is her partner. And because she has never eaten one before, she doesn’t know there’s a pit right there, an inch or less into the fruit. So she bites down on it real hard and she chips a tooth. And Bron—instead of being empathetic about it—is blank, unemotional, and shocked that [Ray] just didn’t know.

It’s [Ray’s] first experience of her partner being cold to her. I was writing this book at the same time I was having conversations with some friends about different vulnerability styles. It was just another point of useless comparison, creating categories that don’t actually matter, kind of like star signs. The idea was along the lines of, “Maybe this style of opening up to someone and building trust is like this type of food.” So a person who’s like a walnut could be someone who’s really tough, standoffish, and suspicious from the get-go, but if someone earns their trust, they’re actually really soft. Versus [a stone-fruit type]: someone who’s front-facing personality is extremely soft but then in getting to know them they get uncomfortable, and they’re more guarded internally.

It was a really fascinating conversation because it brings into thought the way that someone’s been socialized, whether it’s safer for them to have a hard front. I was taught that being self-effacing and friendly is an important part of social survival, especially if I’m going to be identifiably different in some way or another. To be everyone’s buddy is a way to [move] through the world with more ease, and a decent survival skill, but that doesn’t necessarily touch trust at all. Whereas I’ve bumped up against people who are outwardly really cold and unfriendly, but actually such teddy bears. Their way of getting comfortable and easy with someone just isn’t as confusing as mine. Not everyone needs to take that away from the book, but it was a nod to the fact that those conversations were happening in my life at the time and were really helpful. These two characters were just me playing with both sides of that.

What do you want people to take away from Stone Fruit?

I didn’t even know that anyone was going to read this book! I haven’t ever put something out into the public like this before. So the fact that anyone’s gonna read it at all is very cool, and more than enough, honestly. I’m very fond of people projecting on to work. I understand why that’s frustrating for many artists, and that’s understandable and very fair, but I like the idea that—first and foremost—this book is for queer and trans folks. I like the idea that it can hopefully be something that someone who hasn’t had those life experiences can have feelings about. I don’t think there’s a clear message. It’s just a chance for people to feel out some watery humanity shit.

Read this Next: In It Not to Win It 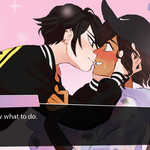