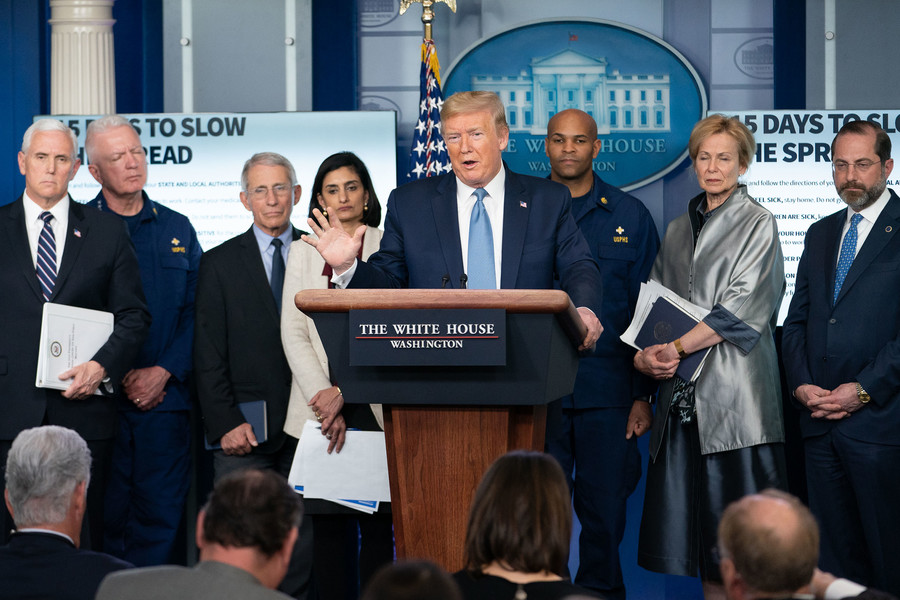 In his iconic 1949 novel, 1984, George Orwell sets a nightmarish scene in which citizens are required to park themselves in front of the television daily for the Two Minutes Hate. The barrage of state propaganda depicts enemies of the state, and Orwell describes viewers screaming imprecations at the screen and bodies surging with a “hideous ecstasy of fear and vindictiveness.” And each day’s ritual starts the same way, the screen summoning viewers with “…a noise that set one’s teeth on edge and bristled the hair at the back of one’s neck.” This is perhaps the most succinct description of the bizarre national pastime of the last two months, in which each afternoon brings a new episode of Donald Trump and Friends’ Funtime Happy Hour.

The president’s lurching daily performance in the White House press room, or occasionally in the Rose Garden, is typically billed as a briefing (in fact, the White House press secretary hadn’t delivered an official press briefing in more than a year)  to update Americans on the progress of the national response to the COVID-19 pandemic. But each one has quickly veered far from that mission, descending into chaos within minutes. It’s clear that the president, trapped in the White House since late March, is bored, frustrated, and restless. Unable to travel the country whipping white supremacists into a froth at rallies; and kept from his weekend routine of holding court at Mar-a-Lago’s golf course and dining room, each briefing is the highlight of the president’s day, the in-person supplement to the tweetstorms he dispatches from the shitter in the wee hours of the morning.

The president is animated only when he’s the center of attention: surrounded by sycophants, attacking journalists who dare detract from his glory with questions, bathing the team at his new favorite network OANN in praise, and glaring sullenly when anyone else steps to the podium. The Two Minutes Hate? More like the 22 Hours Hate. There is a sense, watching the briefings, of sliding off a precipice into uncharted waters together with the rest of the nation. Each one is broadcast on live television, typically with little to no interstitial comment, context, or challenge. (Though one bold CNN chyron operator certainly gave it a go.) They are, as one unnamed White House reporter told Vanity Fair,  a “clown show” whose breakneck veering from subject to subject puts even veteran fact checkers like Daniel Dale to the test as the president spews racist propaganda about the origins of the coronavirus, blithely lies about the availability of testing, and suggests that people combat the virus by injecting themselves with bleach. (Do not, it should go without saying, inject yourself with bleach.)

Of course, these aren’t uncharted waters: Most of us knew precisely where the ship was sailing in 2016, and it has gone on merrily as expected. “The media was complicit in Trump’s rise,” New York Times opinion columnist Charles M. Blow wrote in his recent plea to stop giving the president free advertising every afternoon. “Trump was macabre theater, a man self-immolating in real time, one who was destined to lose, but who could provide entertainment, content and yes, profits while he lasted.” The Hate represents an important inflection point for the United States and the media as the president grows ever bolder in his explicit authoritarian sentiments. Major news networks could continue airing the briefings, with periodic decisions to cut away when the content no longer addresses the response to coronavirus or spirals into utter nonsense. Or they could stop, as many a wishful tweeter hopes they will.

No news network is legally required to carry the president’s performance, and there’s a very strong case for covering these briefings rather than airing them—which is, in fact, the media’s job. It would be easy enough to for networks like CNN and MSNBC to discuss the content of each briefing without airing it, including critical fact checking context, such as noting when the president has shifted his thinking on a given issue. When covering blatant lies, especially those dangerous to public health like suggestions to take medication off-label or blast people with ultraviolet light, or comparing the coronavirus to influenza, the political news media should take time to weigh how those claims should be reported.

Media figures have argued that these briefings hold no value for viewers in search of facts, guidance, and reassurance, but for news networks, the boost in ratings is reason enough to carry them. Others have attempted to argue that live briefings allow the public to see the president’s spite, narcissism, and incompetence in full, thus making them a sort of public service, but most reasonable people know it’s not necessary to broadcast a live feed of the window for people to know it’s raining. And as seen in March, when a man died after ingesting aquarium cleaner because it was labeled as chloroquine—a drug Trump had touted as a possible cure without noting that it’s used in a different formulation for cleaning fish tanks—these briefings are incredibly dangerous. (Another man injured himself drinking a floor cleaning product after the infamous disinfectant briefing.)

But the media’s ongoing fixation on “fairness” has failed it—and, by extension, the people it serves. Sure, in a normal world, an elected official’s daily briefing on a matter of national importance should be carried live, as, for instance, California media carries those from Governor Gavin Newsom. But the Hate isn’t vital information; instead, it’s a toxic blend of meme fodder, hate speech, and irresponsible science picked up and parroted by the president’s loyal fans across the nation. One can’t help but wonder if the networks continue carrying the Hate live because they’re afraid of the consequences if they don’t; the thing they have to gain is avoiding retaliatory conduct like cutting off access—a threat Trump has already made good on—or attacking them in the public square.

The Hate isn’t vital information; instead, it’s a toxic blend of meme fodder, hate speech, and irresponsible science picked up and parroted by the president’s loyal fans across the nation.

Wealthy and powerful advertisers, donors, and supporters are unafraid to use their money as a cudgel, and while news organizations may hotly insist that they’re editorially independent, it’s a claim that’s hard to believe. We’re all beholden to the people who sign our paychecks, directly or indirectly. News organizations may live or die by ratings, but it’s because advertisers want assurances their products are in front of eyeballs. But there’s another, more existential fear for media outlets that feel compelled to televise the president’s puerile antics: The threat of personal repercussions from the rightwing extremists in Trump’s base. CNN was targeted with a bomb threat in 2018. That same year, five journalists were fatally shot at the Capital Gazette in Maryland; the shooter had been harassing the paper’s staff for nearly six years before walking in with a gun.

Right-wing outrage forced Jeff Klinzman, an adjunct professor at Kirkwood Community College in Iowa, to resign in 2019 after he voiced support for the antifascist movement. (He just received a cash settlement from the school.) After the Red Hen in Lexington, Virginia, declined to serve Sarah Huckabee Sanders in 2018, the restaurant was deluged with right-wing harassment. The coalescence of power on the right, while never subtle or artful, has been honed with razor-sharp skills and well-funded think tanks. Trump’s presidency is the product of decades of culture-war rhetoric from two Bush presidencies, of a Tea Party movement that was billed as grassroots populism but orchestrated and funded by billionaire captains of industry, of the anti-abortion movement, of the wide assortment of right-wing mobilizing around exceptionalism, racism, xenophobia, and paranoia. The outrage of the right when it senses any threat to its way of hate has become a constant refrain, and the left has continually rolled over to hear it out.

Responsible news reporting requires making decisions about what kind of content you wish to cover and how, not indiscriminately airing or printing everything thrown over the transom. If networks are truly invested in keeping Americans informed in a pandemic, refusing to carry Trump’s briefings live is the right thing to do. It’s also a difficult thing to do, and corporate media has increasingly proved unwilling to do difficult things, especially in this moment, with closure, layoff, furlough, and pay-cut announcements happening nearly daily across the industry. The very people vitally needed to do the work of imparting facts, science, and best practices are facing unemployment or fleeing for other, often equally troubled, industries. And that has bigger implications: “Last in, first out” means that BIPOC, LGBTQ, disabled, and other marginalized journalists are first to the curb, and least likely to have savings and support to ride out unemployment. But there’s still time to make a better choice, even if it is a dangerous one, and it should not have taken the lethally botched handling of a pandemic to arrive at it.

Read this Next: NBC and the Manufacturing of Donald Trump 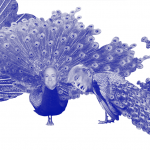