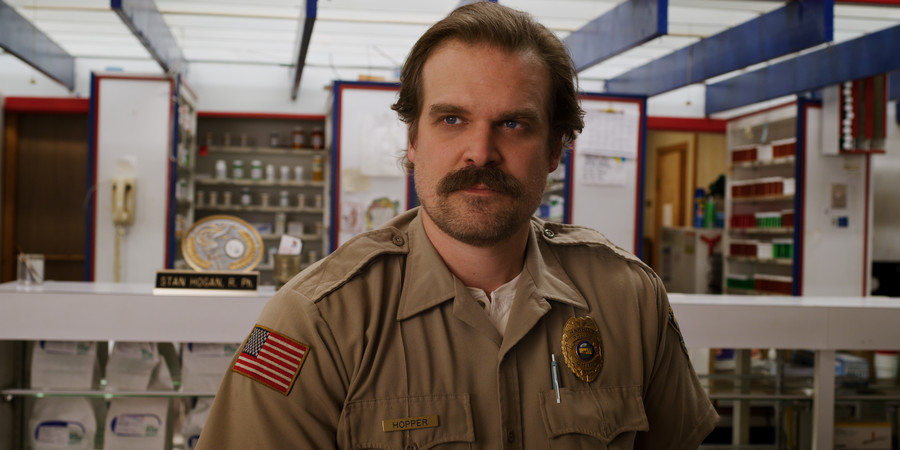 On Fourth of July, Stranger Things fans returned to Hawkins, Indiana, for the third season of Netflix’s hit show. This time around, the stakes are higher, the main characters are older, the costumes are flashier, and the gore is gorier. This season also benefits from the addition of compelling new characters and nostalgic settings, and has generally been well-received. Despite all of these positives, Stranger Things’ handling of toxic behavior has been difficult to stomach. In season 1, police chief Jim Hopper (David Harbour) is portrayed as damaged, sad, and sometimes incompetent, but ultimately he’s a good guy. Hopper embodies the “lovable brute” trope: He misuses his power and employs physical violence a bit too often, but the audience is meant to root for him and grieve with him over the death of his daughter, Sara. Over the course of seasons 2 and 3, however, it becomes clear that Hopper is more than just rough around the edges—he’s abusive.

In the first few episodes of Stranger Things 3, Hopper struggles to accept Eleven’s (Millie Bobby Brown) budding relationship with Mike (Finn Wolfhard) and grapples with his romantic feelings for Joyce (Winona Ryder). But rather than communicating these feelings in a healthy way, he resorts to yelling, threatening violence, and spiraling into jealous rages. When he turns to Joyce for advice about setting boundaries in Eleven’s dating life, she suggests he talk to Eleven and Mike. This proves daunting to Hopper, who muses, “Maybe I’ll just kill Mike. I’m the chief of police. I can cover it up.” This is a jarring response, but it doesn’t register as a red flag to Joyce, who spends the better part of that episode talking Hopper down and writing a letter for him to read to Eleven to help him express his feelings.

Watching Joyce perform this feat of emotional labor (”A heart-to-heart? What is that?” Hopper asks at one point) for her possessive, volatile love interest isn’t cute or endearing, though; it’s exhausting. Moreover, this free therapy session is fruitless. Despite Joyce’s best efforts, Hopper scraps the plan and corners Mike, bullying him into avoiding Eleven. Watching a grown man with a substantial amount of power in his community bully a preteen is terrifying, but the show treats the dynamic between Hopper, Mike, and Eleven as comedic or just a typical father being overprotective of his daughter. Joyce later misses her “non-date” with Hopper in order to investigate some of the strange goings on in Hawkins with science teacher Scott Clarke (Randy Havens). This infuriates Hopper, who jealously berates Joyce, asking her if Clarke is single and questioning her sanity. “You’re inventing things to get worked up about to push me away,” he yells.

That he should know to trust Joyce’s hunches by now is beside the point. With this choice, Stranger Things adds itself to the long and ever-growing list of shows that portrays this level of aggressive jealousy as acceptable. In a recent tweet, actor and activist Evan Rachel Wood asserts that you should never date a man like Hopper: “Extreme jealousy and violent rages are not flattering or sexy like TV would have you believe.” According to the National Domestic Violence Hotline, these behaviors are abusive and are employed as a means to assert control. Hopper’s anger at Joyce isn’t indicative of his passion and threatening Mike doesn’t prove how much he loves Eleven. His behavior is merely a scary example of how toxic masculinity is passed off as a normal response.

This is not to say that portrayals of abuse are inherently problematic; intimate partner violence and child abuse (physical and emotional) are painful realities of our world and there is a case to be made for examining these aspects of human experience onscreen. This is also not to say that Hopper is an irredeemable character, that these actions aren’t part of his developmental arc, or that his own trauma hasn’t influenced his behavior. Rather, the issue with Stranger Things is that its depiction of abuse seems unconscious and uncritical. A series that doesn’t recognize abuse only normalizes it. But this isn’t the first time Stranger Things has played on Hopper’s bad behavior. Hopper and Eleven’s infamous “fight scene” in season 2 presents similar toxicity.

After being isolated in Hopper’s hunting cabin for more than six months, Eleven grows restless and escapes to see her friends. This enrages Hopper, who has prevented Eleven from contacting the outside world in order to protect her. When he attempts to punish her by taking away the TV, she yells, “You are like Papa,” referring to Dr. Brenner (Matthew Modine), her first parental figure and abuser. Hopper responds, “Really? I’m like that psychotic son of a bitch?… You wanna go back in the lab? One phone call. I can make that happen.” Their argument escalates further as Eleven uses her powers to block Hopper from approaching her and locks herself in her room. The scene ends with Hopper furiously banging on Eleven’s door, yelling threateningly while she sobs and hugs her knees to her chest in the corner. Her piercing scream shatters the windows in the cabin they share.

This unwitting misrepresentation of toxic masculinity as normal behavior suggests that the showrunners don’t always know abuse when they see or write it.

In Beyond Stranger Things, the Duffer Brothers refer to this scene as a “psychic tantrum.” The director of the episode, Shawn Levy calls it a “clash of the titans,” “power going against power.” The showrunners seem to think that Eleven’s supernatural abilities even out the power imbalance between her and Hopper. They don’t; Eleven is a traumatized, abused child with a tenuous grasp on language and a shaky understanding of the world outside the lab. A large man yelling at a small girl, threatening to send her back to the facility in which she was tortured, and attempting to bang down her door is violence. The threat of violence in a parent/child relationship—one that is supposed to be loving and safe—is abuse. This unwitting misrepresentation of toxic masculinity as normal behavior suggests that the showrunners don’t always know abuse when they see or write it.

Stranger Things’ lack of self-awareness is especially confusing given its hyper awareness about Billy (Dacre Montgomery). While Hopper’s violence and rage is characterized as valiant or excused, that same behavior in Billy (pre-body snatching) is clearly acknowledged as abusive. For instance, in the same episode as Hopper and Eleven’s “fight,” Billy accosts his stepsister Max (Sadie Sink) when he sees her talking to Lucas (Caleb McLaughlin). He grabs her arm and seethes, “There are certain types of people in this world that you stay away from…and that kid is one of them.” Max snatches back her wrist, looks to the window, and cries. During this scene, the Haxan Cloak’s terrifying eight-minute song, “The Growing,” rumbles in the background, mirroring Max’s fear. In using the kind of music that the show typically reserves to soundtrack demogorgon-heavy moments, Stranger Things depicts Billy as sinister.

Both Hopper and Billy lash out erratically, threaten children, and are physically violent. So why does the show characterize Billy as a villain and Hopper as a hero? The writing of these characters perpetuates the idea that only bad men abuse, that when we meet abusers we will know because they will look and behave a certain way. However, the reality is that abusers aren’t all cartoonishly evil like Billy. That “good” men like Hopper can be abusive is harder to grapple with and harder to write. This begs the question: Who writes Stranger Things? The answer: Mostly white men. Only 24 percent of Stranger Things episodes are written by women, and only 12 percent are directed by women.

I can’t help but wonder what those aforementioned scenes and Hopper’s characterization might look like had the show’s writing room been more diverse. Statistically, diverse writers’ rooms produce more inclusive, nuanced TV series and films than writers’ rooms that are mostly white and male do. But, unfortunately, white male writers are still the norm behind the scenes. Until this changes, great shows like Stranger Things will continue normalizing harmful tropes and mistaking toxic masculinity for heroism.

Read this Next: Warrior To Wallflower