Meryl Streep, Listen Up: Disability Shouldn't Be the Only Trump Card You Play | Bitch Media 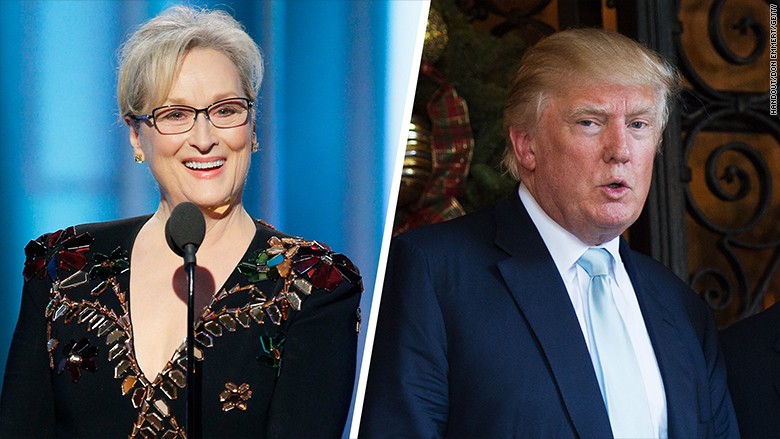 Over the weekend, Hollywood’s liberal elite gathered for yet another one of their perplexing annual events in which they parade over a carpet made from the flesh of their enemies, make speeches, decant delicious vials of Republican tears into fluted crystal glasses, brighten their skin with the flesh of aborted babies, and hand out little golden statues. Everyone dresses up very nicely and many of those in attendance wear jewels worth roughly the gross national product of Belgium. Typically the media invests a great deal of energy in nitpicking the garments worn, asking the female celebrities exhaustive fashion questions, and discussing serious man-related issues like politics and the economy with the men.

The speeches take place within the warm embrace of the Hollywood bubble, but every now and then, there’s a standout, like actress Viola Davis’s searing speech about diversity and representation at 2015’s Emmy Awards. This year, the designated breakout speech came from Hollywood lioness Meryl Streep, who has been treading the boards for decades, and hasn’t minced words while doing it. Even David French at the National Review somehow concluded that she was “winning” at the end of a rather perplexing hot take/hit piece.

In accepting her Lifetime Achievement Award from the Hollywood Foreign Press Association, Streep had a thinly-veiled go at president-elect Donald Trump, and the angle of attack she chose was a familiar one: She specifically called out the president-elect’s public mocking of Serge Kovaleski, a New York Times reporter who contributed to Pulitzer-winning journalism and who famously debunked Trump’s claim that “thousands and thousands” of Arab-Americans cheered on 9/11 as the World Trade towers came down. Trump attacks journalists on a regular basis, so what makes Kovaleski special, and why have the November 24, 2014 incident and Trump’s hot denials become such a part of the public consciousness?

It’s because Kovaleski is disabled — and though his name has been repeatedly erased from discussions of the incident, in which Trump gesticulated on stage in a way clearly designed to mock Kovaleski’s movements, he is actually a real person. Kovaleski has arthrogryposis, which causes joint contractures and limits movements in a way that’s quite distinctive. Trump wasn’t waving his arms wildly: He was very clearly making fun of a reporter whom he later claimed he’d never met, despite the fact that they’d had several in-person interviews.

This incident marked a peculiar turning point in the election: It was okay for Trump to call Mexicans rapists, to demand that Muslims be expelled from the country, to make sexist comments about women, but mocking “the disabled reporter,” as Kovaleski came to be known, was beyond the pale. Many progressives were more righteously infuriated over this than other repugnant Trump comments, and even some conservatives seemed to have room for pause.

As my father put it when we talked about the incident, there was something unsporting and slimy about attacking “the disabled.” Secretary Clinton knew that and used it to great effect in her campaign, and it became a recurring talking point on the left. It wasn’t the first or last time Trump mocked members of the disability community, either. When Marlee Matlin appeared on Celebrity Apprentice in 2011, for instance, Trump allegedly referred to the Golden Globe– and Oscar-winning actress, who is Deaf,  as “retarded.” Matlin fired back on Twitter, commenting that it was “unacceptable,” and adding: “As a person who is Deaf, as a woman, as a mom, as a wife, as an actor, I have a voice. And I’m using that voice to make myself heard…and vote.”

But disturbingly, amid all the uproar over whether Trump did or didn’t mock Kovaleski’s disability, the actual policy implications of a Trump election for the disabled community were rarely, if ever, discussed in the runup to the election. Despite the fact that the DNC platform, and convention, displayed an unprecedented level of disability inclusion, even party leaders focused more on Kovaleski and Trump than the candidate’s functionally nonexistent disability policy—or, for that matter, the hints that his policy positions would harm the disability community.

It was a strong reminder that politicians and the public prefer to objectify disabled people, using them as political props while assuming that disabled people themselves need not be part of the conversation. Performing outrage that Trump would mock “the disabled reporter” was intended for the viewing pleasure of nondisabled people at home, not the disability community, which was already crying out in alarm about what a Trump-dominated country would mean for their lives.

Which brings us back to Meryl Streep’s speech, which has been described in post-Globes coverage as “powerful,” “stunning,” and “provocative.” The speech opened with a glib remark about how actors and journalists are among the most maligned people in America at the moment, which will surely come as a surprise to Muslims, immigrants, people of color, disabled people, LGBQT people, and anyone who isn’t Meryl Streep. It wasn’t a great start, though the audience seemed to love it. But it got worse when she went in on Trump, whom she pointedly refused to name, well aware of the fact that to name something is to give it power. She didn’t rail about the rise of authoritarianism, the gross nepotism and corruption already characterizing the Trump Administration, the hypocrisy, or the rampant racism and Islamophobia. She chose instead to single out the Kovaleski incident, with another interesting twist: As she talked about how Trump “outranked” him in power, position, and privilege, and suggested that Kovaleski was incapable of fighting back, she did something truly despicable: Not once did she mention him by name. Instead of naming him, and giving him power, she took it away from him — because she wanted to objectify Kovaleski and use him as a political tool, not acknowledge his humanity. And she wanted her audience to know that the most deplorable thing about one of the most deplorable men on the planet is that he said a mean thing about a disabled person, once.

“It broke my heart,” she said, centering the incident on herself, the nondisabled person, using the incident as a demonstration of Trump’s “disrespectful” behavior, noting that it was disturbing and unbecoming to see a public figure engaging in such activities. The applauding audience ate it up, the media ate it up, and Twitter ate it up.

The disability community, however, was not amused. “We don’t need nor desire pity or charitable efforts,” commented disability rights activist William Peace, who writes as Bad Cripple.

I have tremendous respect for Streep, because it is difficult to be a woman in Hollywood, and it’s even more difficult to be an older woman in Hollywood. Though she is patronizing and clueless, I very much doubt that she’s disablist — but I also very much doubt that she’s taken time to actively seek out disability rights activists, to learn about disability issues, to engage with things that might make her uncomfortable. She’s not alone. The bulk of Hollywood thinks like she does, as evidenced by the fact that less than two percent of film and television characters are disabled, and 95 percent of them are played by nondisabled people, according to the Ruderman Foundation. Disabled people are systematically excluded from film and television, just as they are from society.

None of the actors commended for their performances at the 2017 Golden Globes identifies publicly as disabled (though one, Hugh Laurie, made his name in the United States playing disability on TV) and that, perhaps even more poetically than Streep’s speech, highlights the fact that Hollywood, and America, have rejected the disability rights adage of “nothing about us without us.” When Eastern European disability rights activists coined it in the 1980s, they were facing many of the same issues that we still face today. As long as people talk about disability without disability in the room, or without acknowledging disability, or without allowing disabled people to represent themselves, making positive changes for disability representation in pop culture, media, and politics is going to be very challenging. I’ll take more Marlee Matlins and Serge Kovaleskis, and fewer Meryl Streeps, please.