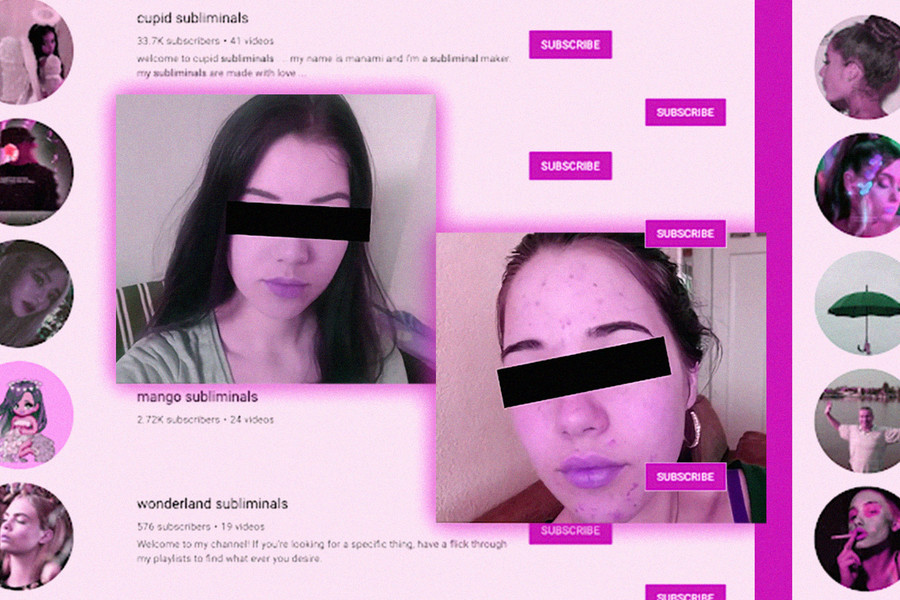 On April 5, 17-year-old Reddit user u/Dizzy_Bother posted a collage featuring a before-and-after photo. In the before picture, she has acne, and in the after, she doesn’t. She didn’t post these selfies to a skincare or a makeup subreddit, where one would expect beauty imagery to be shared for thoughts and feedback. Instead, she posted the collage to r/Subliminal, a Reddit community that focuses on “subliminals,” YouTube videos intended to reprogram your subconscious to change your body or mind in some way. Subliminals can turn you into a mermaid. You can also become a TikTok celebrity, a K-pop idol, or get the tiniest waist in existence—plus 11 abs. These subliminals play on insecurities and desires so absurdly specific, one might not even know they have them. Unsurprisingly, many of these subliminals seem to target a demographic that is already primed to have boatloads of insecurities: teen girls.

Subliminal messaging is nothing new. In 1957, market researcher James Vicary claimed that by flashing the phrases “eat popcorn” and “drink Coca-Cola” throughout a movie, he dramatically increased sales of popcorn and Coke. By 1962, when Vicary admitted that his claims were based on too little research, subliminal messaging had already seeped into the American zeitgeist, from backmasking in The Beatles’ “Revolution 9” to Josie and the Pussycats with, as noted by Consequence of Sound, the “film’s plot [revolving] around the perils of subliminal advertising.” The difference between Vicary’s subliminal messaging of the ’50s and the subliminals that populate Reddit in 2020 is that the people in r/Subliminal are using them consciously. They aren’t sheeple blindly ordering Coke at an AMC concession stand, but are, instead, people who want things that many of us want: clear skin, confidence, love.

Subliminals call to mind new-agey fads of yore. They have the same magical aura around them that Rhonda Byrne’s The Secret (2006) and its law of attraction produced in the mid-aughts: Our brains are a machine more powerful than we could ever imagine. In short, we are Bradley Cooper in Limitless (2011), but instead of taking a pill to unlock the deepest powers of our mind, we can simply go to the self-help section of Barnes & Noble. If The Secret is the gaudy, hot pink, bling-studded self-help fad of the 2000s, subliminals are the millennial pink version: softer, more trendily aesthetic, and perfectly suited for consumption. The craze that The Secret produced was in-your-face, active—THINK THIS TO GET THIS!—but subliminals are more subdued and passive, crafted intentionally for Gen Z. Most subliminals consist of instrumental music with “affirmations” calmly spoken beneath them, with the messaging largely inaudible unless listeners crank the volume. The videos are mostly audio, so they can play in the background while you sleep, lulling you into dreams about you—but better.

Teen girls are uniquely drawn to social media’s promise of perfection or something close to it. When I chatted with u/Dizzy_Bother via Reddit, she said that she was initially suspicious that subliminals could actually make changes to her appearance. “At first, I thought it was fascinating, but I also did not really believe the affirmations in the music changed my unconscious mind, as subliminal makers often explain it. I still decided to use them as some kind of tool, to make it easier to create positive feelings for myself,” she said. “I thought I could use the subliminal music to create a placebo effect. So I started listening to the music, and in the beginning I only focused on subliminals to improve [my] skin.” She attributes the dramatic change in her photos to subliminals—like this one, which claims to turn participants into a Mary Sue—though she admits that the before and after photos were taken years apart. “I do have to say that there is a gap of two years between the pictures. So, I realized I can’t prove my skin changed way faster than that (I promise it did, but that does not mean much coming from a stranger probably).”

Typing “subliminal for” into YouTube’s search bar prepopulates results that one might associate with more traditional self-help measures: subliminals for success, for confidence, for intelligence. But it also populates subliminals that are more related to physical features. There are subliminals for hair growth, clear skin, a smaller forehead, and a smaller waist. This is what makes the world of subliminals so fascinating—there are, seemingly, no limits in their ability to reshape the physical. To be fair, the r/Subliminal Q&A addresses this: In “What Subliminals Can Actually Do - PLEASE READ,” there’s the caveat that subliminals can’t produce results that include “altering the behavior of others,” “fundamental changes to your anatomy,” “breaking the laws of physics,” or making users similar to a fictional character.

These caveats evaporate, however, once you enter the wild world of subliminals on YouTube. A search for “subliminal mermaid” returns several videos with hundreds of thousands of views. The most popular mermaid subliminal, currently clocking in at more than 162,000 views, promises listeners upwards of 45 different types of results, or at least it contains affirmations that, if listened to, will lead to said results. These range from the predictable—“long healthy smooth shiny head hair” and “smooth airbrushed skin”—to the questionable—“always be safe in water” and “nose tip turned to your desired degrees”—to the wildly specific—“bright white scleras,” “attractive maxilla.” With one fell swoop, the acceptably practical rules that r/Subliminal carefully laid out have become irrelevant, replaced with a greedy grab bag of promises that can allegedly be fulfilled by listening to the 16-minute “Mermaid Beauty + Abilities - Improved || Fantasy Beauty” subliminal.

As far-fetched as these promises sound, the comment section is littered with positive reviews. YouTube user B0red as sh1t says, “What the fuck, I went to the beach today for a swim and when I came out [of] the water, two people said I looked like a mermaid.” Honey K says “I listened to this twice…and I’ve had at least five strangers compare me to a mermaid.” Whether these subliminals actually work, they promise their listeners something they lack in their day-to-day life: power over their own self. You can get “rich teen perfect skin,” gain extreme popularity by becoming Regina George, and can, of course, glo up (even during quarantine!). Teen girls are systematically denied bodily autonomy, with school dress codes, misogynistic and underfunded sexual education classes, and the ever-present male gaze impacting their growth from young girls to adult women. Subliminals grant them a seemingly clear road to obtaining the power over their own bodies and selves that they are so sorely missing.

Even the aesthetic of these YouTube channels seems engineered to attract the teen demographic. Avatars include lo-fi pictures of girls that call back to Tumblr’s “soft glam grunge” trend of 2013. The names of the channels themselves—lavender subliminals, -OCEANVIBESき, and cupid subliminals—are graceful, cute, and sexy. They feel friendly and relatable, unlike the more heavy-handed marketing that might populate a branded Snapchat story or an Instagram ad. And like most things marketed toward teen girls, there’s an insidious underside.

The most popular video on lavender subliminals is called “most intense weight loss subliminal EVER”—and it has more than three million views. “Body To Die For” is the most viewed video on -OCEANVIBESき. It includes affirmations that will not only help you “have the most perfect 19-inch waist” and “look elegant and petite,” but also to have “the softest boobs in the world,” a “beautiful pink vagina,” and “small baby hands.” Also, with their help, you can “smell like coconut passion by Victoria’s Secret.” This video currently has more than 1.3 million views.

Subliminal videos are mostly audio, so they can play in the background while you sleep, lulling you into dreams about you—but better.

At 22, I am far enough from my teenage years to be able to laugh at the infinite number of corporeal changes that these subliminals offer to help me achieve. And yet, I’m not far enough removed to be immune to them. The affirmations serve almost as an itemized list of what could be wrong with my body. My wishes about my own body are vague, something I think about in terms of “I wish there was less of this” or “I wish this was more like this.” The -OCEANVIBESき video, however, lays out that insecurity for me in more specific terms, giving viewers something new to be insecure about: Not only are there affirmations to lose fat from my stomach, but my stomach can also be more “beautiful” and “feminine.” I can get a waistline “exactly like Barbie’s.” Those little insecurities that I think about, but that no one else seems to notice, like one eyebrow being higher than the other or my crooked middle fingers? Subliminals notice them. And they promise to change them.

Though u/Dizzy_Bother is pleased with the results of her subliminals usage, she acknowledges that the obsession with appearances in the subliminals available on YouTube might be an issue for teen girls, especially those taking to the internet in hopes of “fixing” themselves. “The most popular subliminals, I believe, are about appearance,” she says. “The people who use these kinds of subliminals a lot, can get really fixated on [their] appearance, I think. I also sometimes see subliminals [like] ‘become anorexic,’ or ‘become underweight.’” Inferring from the comments made on these particular subliminals, she thinks that the users are “mainly younger girls.”

While they’re no longer always viewed in the same malicious Judas Priest vein of yore, the subliminals of 2020 have their own acidity. Their danger has a slower, more imperceptible way of sneaking up on young women, but it’s there: telling them that before they can have the perfect body or waist or personality, they must first take an inventory of everything that’s wrong with them. And after you know what’s wrong? All you’ll have to do is sit back, close your eyes, and listen. 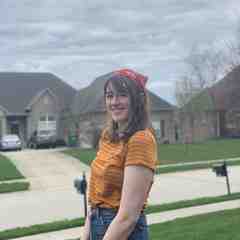 Frannie is a writer and comedian based in Chicago. She hosts the podcast “Girls Like Us,” and her favorite movie is the Magic Bullet Infomercial. You can follow her on Twitter @trophyuncle.