Over ItIs There Room for Anxious Black Girls in Music? 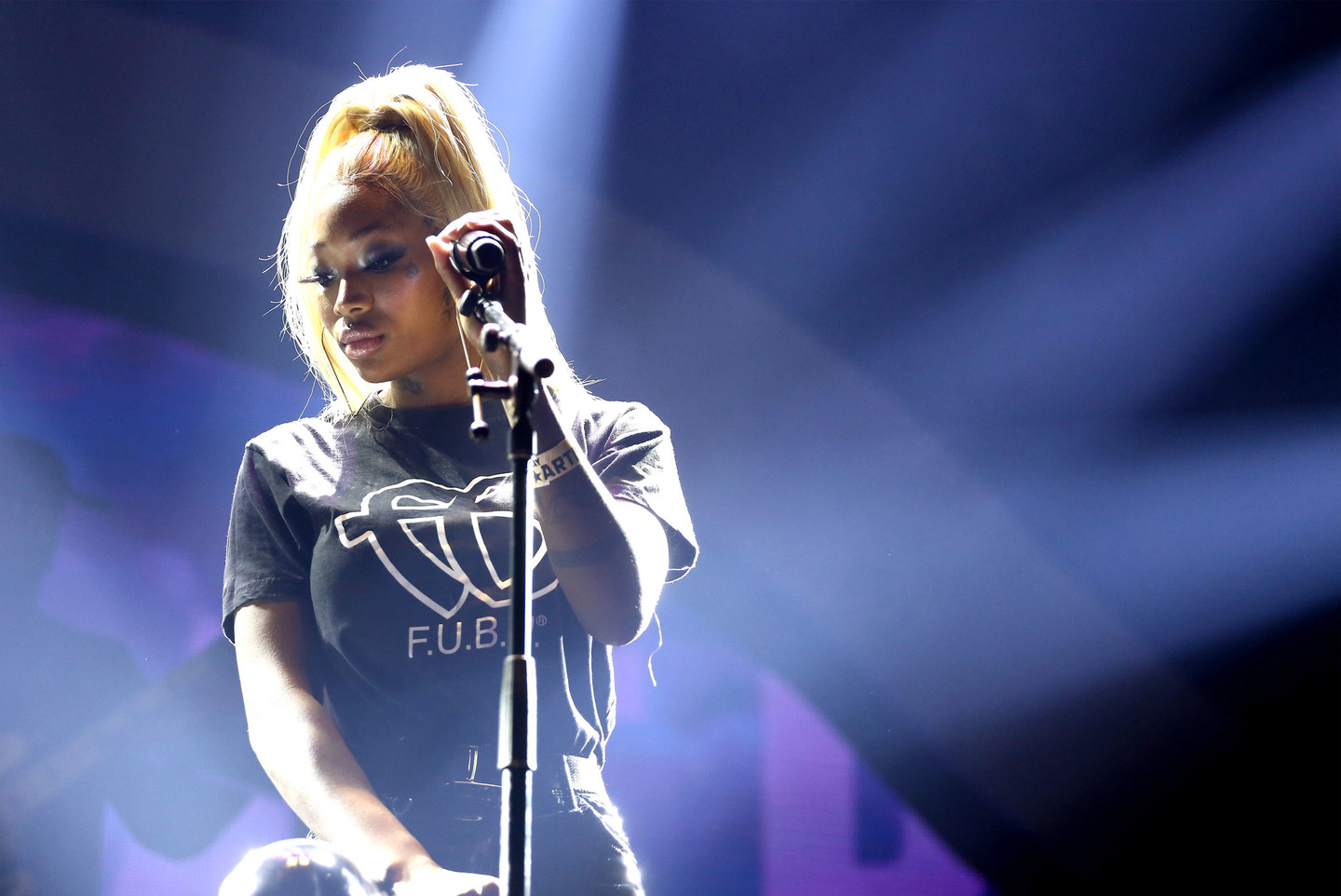 R&B artist Summer Walker has been open about her anxiety for as long as she’s been famous, but somehow she’s still met with backlash and disbelief. Most recently, Walker came under fire for canceling several remaining dates on her “Over It” tour to preserve her mental health, explaining in a video, “I’m not going to be able to finish this tour because it doesn’t really coexist with my social anxiety and my introverted personality.” Then, in November 2019, several fans were driven to anger by Walker allegedly not speaking much to them during meet and greets. “You don’t deserve us!” one fan proclaimed in on Instagram after a meet and greet failed to meet their expectations. While the fan’s disappointment is partially understandable (many of us dream of meeting our idols), her sentiment also begs the question: What exactly do we deserve from Black women entertainers, especially those with anxiety disorders?

Many of Walker’s self-proclaimed fans are still unsure about her public persona; they’re so skeptical, in fact, that some of them have accused her of faking her anxiety and said she should leave the music industry if she’s too anxious to be in the limelight. Though Walker attended the Soul Train Music Awards in November 2019 and accepted a Best New Artist award, she later revealed that she nearly skipped the ceremony altogether. “I pushed through my #socialanxiety today, and I’m really glad I did,” Walker wrote on Instagram. Despite her transparency, listeners have openly questioned the validity of the singer’s mental illness, with some even pointing to Walker’s past career as a stripper, suggesting that if she was once comfortable dancing semi-nude for strangers, it’s impossible for her to be anxious about performing her own music. The inability to distinguish between a Black woman musicians’ onstage persona and real life only fuels the expectation that Walker must be exactly what her fans demand in order to be accepted.

Unfortunately, Walker isn’t the only Black woman in entertainment who has struggled with fame. Janet Jackson has been a household name since she portrayed Penny on Good Times, and she’s also battled depression behind closed doors. “The struggle was intense,” she told Essence in July 2018. “And of course there are always the societal issues of racism and sexism. Put it all together and depression is a tenacious and scary condition.” While Jackson never said she kept quiet about her mental health to preserve her image, saying that racism and sexism exacerbated her struggle certainly points to a rational fear of fans perceiving her differently if they knew about the state of her mental health. Actor Lisa Nicole Carson, who costarred on Ally McBeal and ER before seemingly disappearing from the public eye, wrote about her journey with bipolar disorder in a June 2015 essay in Essence. “I’m tackling the myth that African American women have to be pillars of strength,” she wrote. “We have the right to fall. We have the right not to always have our shit together. We just have to take our mental health as seriously as we do the physical.”

And in 2018, Michelle Williams, who has had depression since she was 13, used Instagram to disclose her mental-health journey. “For years I have dedicated myself to increasing awareness of mental health and empowering people to recognize when it’s time to seek help, support and guidance from those that love and care for your wellbeing,” she wrote. “I recently listened to the same advice I have given to thousands around the world and sought help from a great team of healthcare professionals.” The stigma of mental illness combined with the Strong Black Woman trope prevents Black women from reaching out for help. On average, anxiety is more chronic and intense for Black women than their white counterparts. Research from the American Psychology Association points to how the stereotype of the Strong Black Woman, or a Black woman who is capable of handling any situation without assistance, often prompts African American women to use self-reliance and self-silence as coping mechanisms in response to anxiety or other stressors rather than seeking professional help.

Despite this, anxiety and other mental illnesses are often not taken seriously within Black communities. “Research and history tell us that three basic images exist—the Strong Black Woman, the Angry Black Woman, and the Jezebel/Video Vixen,” psychological sciences professor Angela Neal-Barnett wrote in a 2018 article for the Anxiety and Depression Association of America. “These images affect how other people see Black women and how they see themselves. They also play a role in the development and maintenance of anxiety.” Combine these stereotypes with an expectation that celebrities are flawless, and it’s not surprising that so many Black women are fighting to take care of themselves. But thankfully, a positive shift is beginning: A growing number of Black women in music, including Ari Lennox and NoName, have begun challenging the idea that Black women celebrities are infallible or that their mental health should be handled outside the public eye.

Lennox, in particular, has been very open about her awkwardness, loneliness, and desire for more friends. On “Chicago Boy,” a song on Lennox’s 2019 album Shea Butter Baby, she sings, “I need to know if you guys are really ready to be my friend/ Because it gets real, it gets gross, it gets terrifying.”) Meanwhile, NoName has reshaped the rap game, molding it to better suit her sensitivity and need for solitude; on songs like “Self” and “Blaxploitation,” she reflects on her vulnerability in a way that might’ve been discouraged in decades past.

We owe Black women musicians like Summer Walker the space to take care of themselves and prioritize their mental health without it costing them fans or their career.

And when the pressure mounts, both NoName and Lennox have been open about possibly leaving the music business altogether. “I don’t see how I can ever be happy doing music again. I don’t want to write and I don’t want to listen to listen to any beats. I don’t want to perform. I think im literally done. Never thought I could feel that way but I do,” Lennox tweeted in August 2018. Though Lennox noted in a subsequent tweet that her dissatisfaction “has nothing to do with music,” she threatened to leave the industry again in November 2019 after the Soul Train Awards snubbed Shea Butter Baby. “I’m not selling out. So I quit. It’s clear I’m not ‘cool’ enough. Not trendy enough and I don’t care to be. I don’t strive for that. I’m not going to chase this shit ever again. No more fake shit on my part,” she tweeted. Lennox was promptly called “too sensitive” for daring to express her dissatisfaction with the career she chose.

Meanwhile, some white women entertainers are able to face their mental-health challenges without being derided or cast aside. Sia, for example, has openly admitted to not enjoying performing and she covers her face with elaborate wigs or huge sunglasses while in public because she has debilitating anxiety and bipolar disorder. But instead of being overtly scrutinized or judged by fans, Sia is viewed as quirky, outlandish, or even brave. Similarly, Zooey Deschannel, who has arguably made a living from being the “quirky girl,” has yet to have her career ruined by her misfit awkwardness. In fact, the actress even admitted that much of her “adorkable” act was a successful marketing scheme for New Girl. “That was something that was calculated, you know what I mean?” said Deschannel in a 2015 interview with HuffPost. “That was our marketing department at Fox and they did a really good job with our first season, but that’s a word that describes the character that I play, not me. I don’t personally have identification with that word myself.” While white entertainers can profit from their quirks, Black women aren’t afforded that same luxury.

After canceling her “Over It” tour, Walker posted an apology video on her Instagram. “I really hope that people understand and respect that at the end of the day that I’m a person,” she said. “I have feelings, I get tired, I get sad, and it’s just a lot.” Walker’s openness about her anxiety, especially in an environment that has tirelessly tried to erase this narrative, is enormously important. We owe Black women musicians the space to take care of themselves and prioritize their mental health without it costing them fans or their career.