Which Companies Got Called out for Sexist Super Bowl Ads? | Bitch Media

Which Companies Got Called out for Sexist Super Bowl Ads? 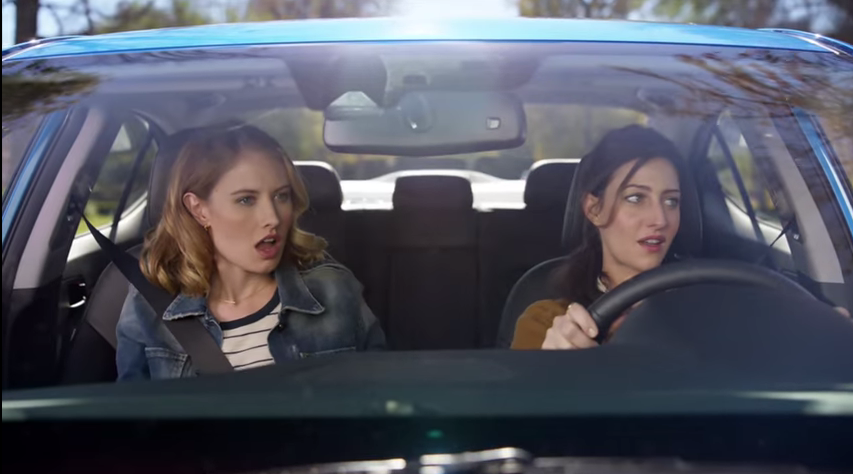 Super Bowl 50, AKA the pre-and post-show for Beyoncé’s halftime performance, was culturally unavoidable. Of course, in addition to being the biggest football game of the year, it’s also the biggest platform for advertising of the year. What companies decide to showcase during their very expensive moments of screentime says a lot about what they think Americans will value.

This year’s commercials were filled with a lot of talking animals (but let us not speak of the hybrid pug/monkey/baby) and, in my opinion, were typically more boring than sexist—perhaps advertisers and companies are learning that being offensive doesn’t help sell products or maybe they realized that millions of viewers would be quick to point out stereotypes on social media. During the Super Bowl, media nonprofit The Representation Project asked people to call out sexism in ads on the hashtag #NotBuyingIt. Some of the companies that got a lot of pushback on the hashtag last night were Snickers, Hyundai, Buick, and Doritos. Even among the meh, there were enough awful ads to hash out.

Even before kick-off, comedian Kevin Hart led off with a commercial framed around paternalistic BS. In this Hyundai ad, Hart stalks his daughter while she’s out on a date using newfangled technology: He offers his daughter’s date the keys to his own car and activates a smart watch to track them through their night together. Never mind that he could have easily handed the keys to his daughter because she seemed capable of driving herself, the creepiest thing here is that Hart needed follow her around to ostensibly protect her purity.

Hart watches the couple as they see a movie, hides in the wall of stuffed animal prizes at a carnival game, and finally ascends into view as he dangles from a helicopter while his daughter and date chill at makeout point. A voiceover says, “Because a dad’s gotta do, what a dad’s gotta do.” Really? How about a dad trust his kid to make decisions about her own body about what she’s comfortable with?

Keeping with their series of commercials where random celebrities are the hangry versions of everyday people, Snickers has Willem Dafoe appear in the white halter dress that Marilyn Monroe made iconic in The Seven Year Itch. Apparently  Monroe needed a snack before the flying skirt scene? I didn’t really get the point here, but the commercial was called out for transphobia: 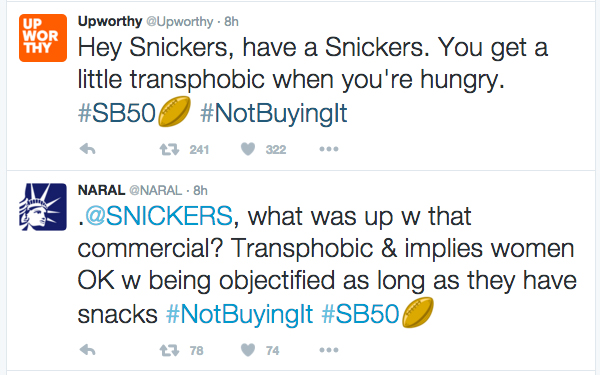 In this ad, a pregnant woman gets an ultrasound while her partner munches on Doritos. The fetus apparently hears the crunch of the chips and starts flailing around in the womb, ultimately launching itself down the birth canal. Regardless of the fact that I never thought I would have to Google search “Dorito fetus,” NARAL was quick to criticize this ad for humanizing a fetus and for “sexist tropes of dads as clueless & moms as uptight.”

In this ad, a retired astronaut sits in a living room, staring off blankly, disenchanted with the world around him. His son gets him behind the wheel of a car that reminds him of his space days and soon he’s flooded with memories taking off in a rocketship with David Bowie’s “Starman” plays in the background. While the majority of Super Bowl commercials feature white folks, particularly white men (hello cameos from Alec Baldwin, Anthony Hopkins, Christopher Walken), it’s still unsettling to see that the only person of color in this is a woman who plays the caretaker to this disengaged astronaut. Somehow y’all can compare your car to a rocketship, but are unable to imagine that the astronaut role be played by anyone else but a white dude. The whiteness of CBS’s programming and the Super Bowl ads was something I kept thinking about all night, but this ad just made that dynamic sting a little bit more sharply than the others.

This ad is ostensibly a flip of the man-ogles-woman trope: Here two women are cruising through a street full of multiple Ryan Reynolds. I don’t know how these two ladies can remain so calm when it’s obvious that they’re driving through a neighborhood occupied by a cloning experiment of aggressively boring white men modeled after Alanis Morissette’s ex. The driver almost hits a Ryan clone while he’s walking a pack of dogs, but the car’s smarter than the ladies and brakes just in time. Personally, I was only concerned about the safety of the dogs.

The NFL has a domestic violence problem that they continue to push away without doing real work to address it within their own league. The second I saw this ad telling their audience to “learn how to help” people experiencing domestic violence or sexual assault, my cynicism radar beeped into overdrive. Diana Moskovitz of Deadspin points out how No More is an empty gesture, much like the league’s Pinktober campaign to raise breast cancer awareness that raises lots of money for the NFL without doing real work to end the disease. It’s good that domestic violence is now on the NFL’s radar, but it’s much easier to hire an ad agency to create an evocative commercial than it is to create real change to prevent violence against women.

Take this insightful review and add the NFL's own ad and you get... #nflfamilyvalues. Sigh.

You know what's weird? Those ads about “NFL Family” featuring the Super Bowl babies that played throughout the game. Every time they showed that commercial, it was just reminding us that two hetero people had sex and made this child on the night of the Super Bowl. Why are you telling us this over and over again? 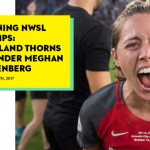 by Britni de la Cretaz
By not covering women who are playing sports, sports media is making it impossible for people to invest in leagues and women athletes.