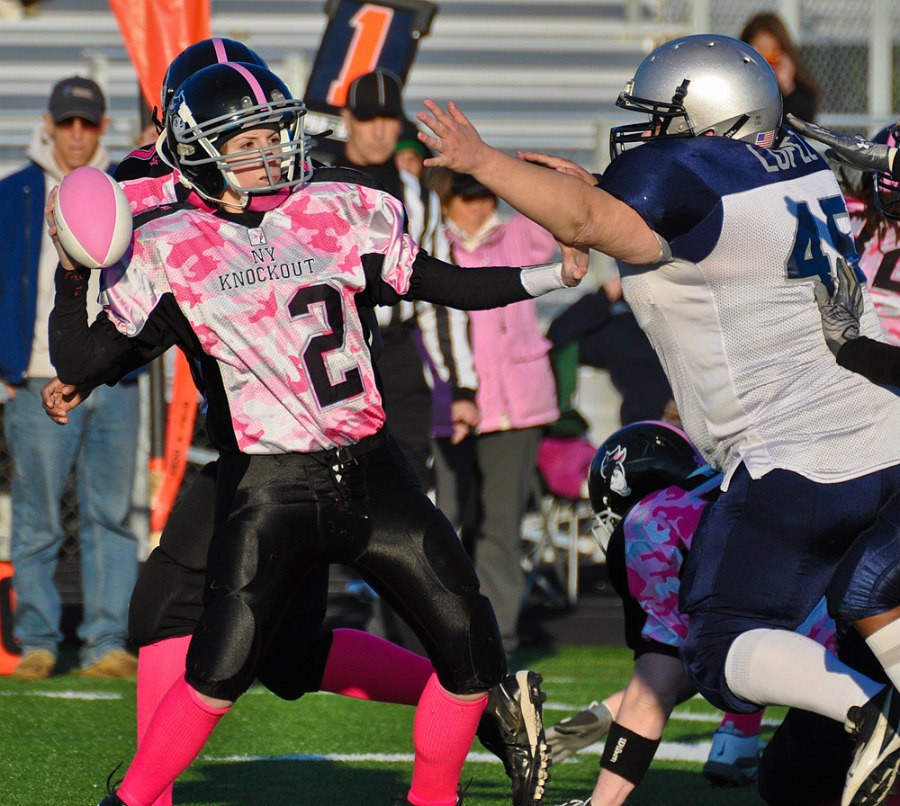 This story was originally published on November 29, 2017.

Football is the most watched sport in the United States, but let’s be real—the NFL is a mess, between the rampant racism from owners and the concussion crisis. With all of the nonsense, it can be hard to put morals aside and enjoy watching the games. What’s a football fan to do? You could invest in one of the women’s semi-pro football leagues that are dying for fans and financial support.

Let’s do a quick rundown: Some people aren’t watching the NFL until Colin Kaepernick is hired. While signed to the San Francisco 49ers, Kaepernick began taking a knee during the National Anthem to protest police brutality and racial injustice. After Kaepernick opted out of his contract with the 49ers, he has not been signed to another team, although he’s put up better numbers than many of this season’s starting quarterbacks. Teams claim it’s merit-based, but that’s clearly not the case. Kaepernick has sued the NFL for collusion. Then there’s the brain injury issue the NFL has tried to hide for years. The sport isn’t just bad for those who play—it’s actually killing them. Researchers at Boston University found that of 111 brains of former NFL players donated to the school, all but one had chronic traumatic encephalopathy (CTE). While the NFL claims it supports researching the issue, it’s hard to imagine how the game can move forward when we understand the physical costs athletes pay for playing.

Then there’s the fact that team owners are showing their racist asses left and right. When asked about the players’ ongoing protests, Texans owner Bob McNair said they “can’t have the inmates running the prison.” A recently released video of Dallas Cowboys owner Jerry Jones showed him making a racially insensitive comment. The NFL also thought it was acceptable to have the Washington football team host a game on Thanksgiving. It’s bad enough that the NFL has a team named after a racial slur. Having them host a game on a holiday that whitewashes colonialism and the genocide of Native Americans is a slap in the face. “Using the holiday to additionally promote the Washington team’s derogatory name further marginalizes Native Americans—and tells people across the country that on this holiday it is perfectly acceptable to promote a painful racial slur,” Ray Halbritter, Oneida Nation representative and spokesman for the Change the Mascot campaign, told The Nation. 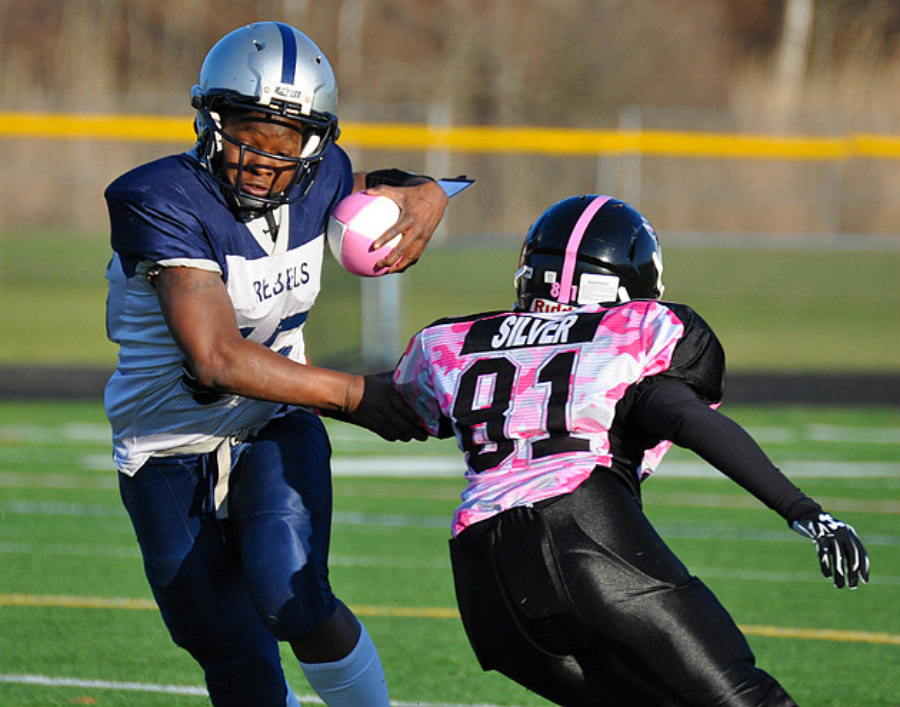 If you’re feeling dejected, I have good news for you. Unbeknownst to Cam Newton, women do more than just talk about routes. Lots of women run them, know their Xs and Os, and play full contact football. “We all know the story of the one girl who joins the boys to play football,” Laurie Frederick, the CEO and founding member of the Independent Women’s Football League (IWFL), told Sporting News. “It’s our opinion that there’s probably another 30 to 40 girls behind her who’d want to play if it were all girls.”

Being the only girl on a team is hard. It can be intimidating, and not every girl is prepared to navigate the landmine of sexism and tokenism that comes with the role. Last year, eighth grader Alison Rogers sat out the football season although she played the season before because she was required to complete extra physical fitness tests and gain clearance from a panel that would determine whether or not she could play. None of the male players were subjected to these extra hurdles. In 2013, 11-year-old Caroline Pla eventually earned the right to play after her Catholic school initially said she couldn’t because of concerns about “inappropriate touching.” On all-girls teams, however, each player has the opportunity to contribute fully and play a much larger role on the team. This is especially true as players get older and differences in physical size and strength between girls and boys become more pronounced, and the numbers of female athletes dwindles.

There are two semi-professional women’s football leagues. The IWFL was formed in 2000, making it the oldest of the active women’s leagues. They have 35 teams and over 2000 players. They are also the only women’s league to offer performance bonus prize awards. The Women’s Football Alliance has been around since 2009. The semi-pro league has 45 teams in 32 states, and the District of Columbia, meaning that millions of people can attend WFA games. On the Boston Renegades, there are players who commute from as far away as New York City to play for the team. WFA teams raise their operating costs through tickets and merch sales and a few partnerships, but that money only covers regular season games. If the team makes the playoffs, they have to pay their own way. That’s not unusual. In these leagues, women play strictly for the love of the game: Playing football actually costs them money. 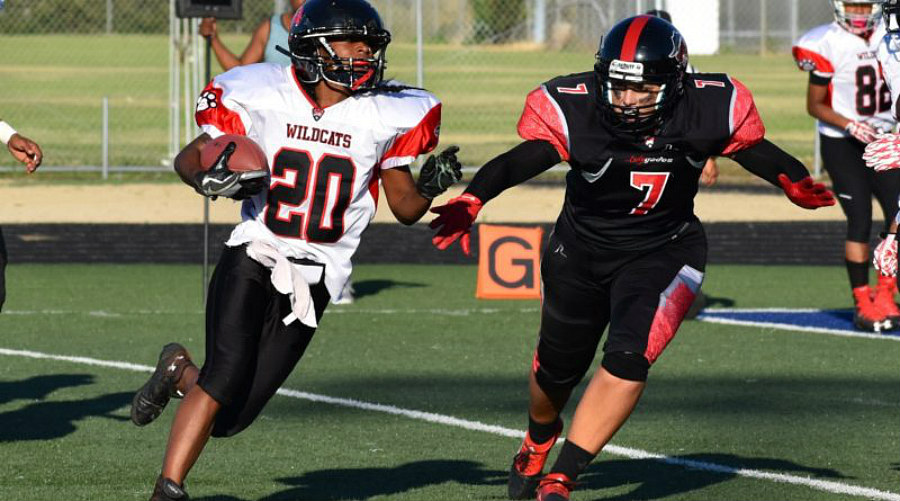 They have to pay for their own travel expenses; fundraise for uniform and operating expenses with bake sales, change buckets, and bowling tournaments; train in their free time; and hold down full-time jobs and families. In 2015, the average NFL salary was $2.1 million. Playing football is their full-time job, so they’re compensated for practicing, traveling, and playing time, and they’re able to rest when they’re not playing or training. As Women’s Football Alliance player Amanda Alpert, who plays center for the Renegades, told me when I profiled the team for espnW last season, “When you’re a professional football player and you get injured, that’s your job and someone’s there to take care of you. When you get injured here, it’s a lot different and a lot of people’s jobs are on the line.”

Contrast that with the WNBA, a women’s league that receives a subsidy from the NBA as well as a portion of the revenue from the NBA’s television and sponsorship deals. The WNBA also receives a significant chunk of revenue from ESPN (though it pales in comparison to what the NBA receives—$25 million to $930 million in 2016, respectively). The newly formed NWHL is attempting a similar tactic; currently in its third season, the NWHL Metropolitan (formerly New York) Riveters announced a partnership with the NHL’s New Jersey Devils. In Portland, the NWSL’s Thorns became the first team associated with a MSL team and attendance at Thorns games have been higher than some NBA, NHL, and MLB games.

Yet, when Sporting News asked the NFL if they might follow in the NBA’s footsteps, Vice President of Corporate Communications Brian McCarthy said that they didn’t “currently have plans” for a women’s league but emphasized that they “support football wherever it’s played and by whom” it’s played. But what kind of support are they actually providing? And even if they provided the financial support that the teams so desperately need, why can women’s sports only survive with the backing of their male counterpart?

There’s only one example of a relatively successful women’s football league: The Legends Football League, also known as the “Lingerie League,” sprung up in 2009 and almost immediately landed a TV deal with MTV2 as well as countless sponsorships. The league currently has nine teams and different rules than both the NFL and the other women’s leagues. Their uniforms are also drastically different: Instead of playing in full pads, jerseys, and pants, they wear underwear. Yes, the league is essentially women, in their underwear, tackling each other (though at the end of the 2017 season, the players wore leggings that still lacked padding or cushions). 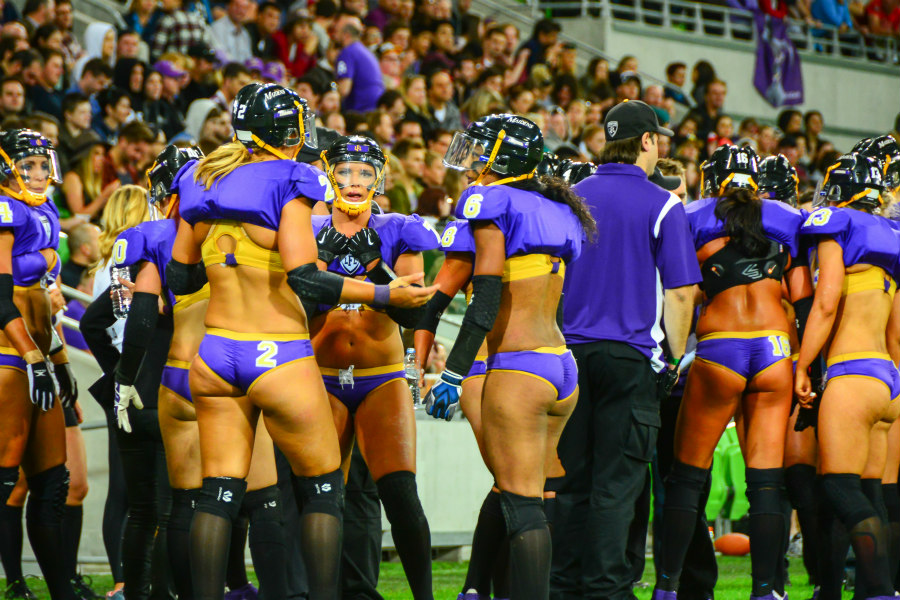 Being forced to play in outfits that cater to the male gaze in order to receive visibility is a testament to what women are willing to do to play the sport they love. It’s also representative of the way women athletes are hypersexualized. Take, for example, the way athletes are posed on the covers of magazines. Often, the men are shown in positions indicating strength, and usually in active positions related in some way to the sport they play. Women, on the other hand, are much more likely to be posed like sex symbols or models. A 2007 study found that while women are featured in just 12 percent of athlete-endorsed magazine advertisements, they are shown as provocatively or partially dressed 81 percent of the time. The message is that we should care about this woman not because she is a good athlete, but because she’s appealing to straight men.

Women’s football leagues can and do provide the same level of athleticism and pure joy that the NFL and collegiate football do.

They also provide something else—representation and identification that women can’t find in men’s professional sports leagues. They give young girls heroes that look like them, and a belief that “girls can do anything boys can do” is achievable. “I’d love to gain awareness and support. When you think football, some people automatically think it’s male dominated but I’d love to see it that that’s not always where their thought goes,” Ashlee Garza, who plays on the defensive line for the IWFL’s Woodland Wildcats, told Teen Vogue last year. “If the energy was the same around it as the NFL, that would be great.”

But until female players receive the same amount of support, interest, and investment as men, women’s leagues will continue existing because of the time and dedication that the players put into the sport. But the athletes and their fans—as well as the people who haven’t been given the chance to be fans because they can’t access the games—deserve the opportunity to play the sport in a way that’s both financially sustainable and personally fulfilling. In order to get there, women’s leagues need the support of more than just the players and their small base of fans. And there’s no better time to invest in women athletes than during a NFL boycott. 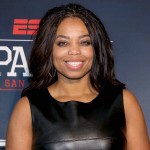