Who’s Hurt By the Supreme Court Deadlocking on Immigration? Millions of Families. 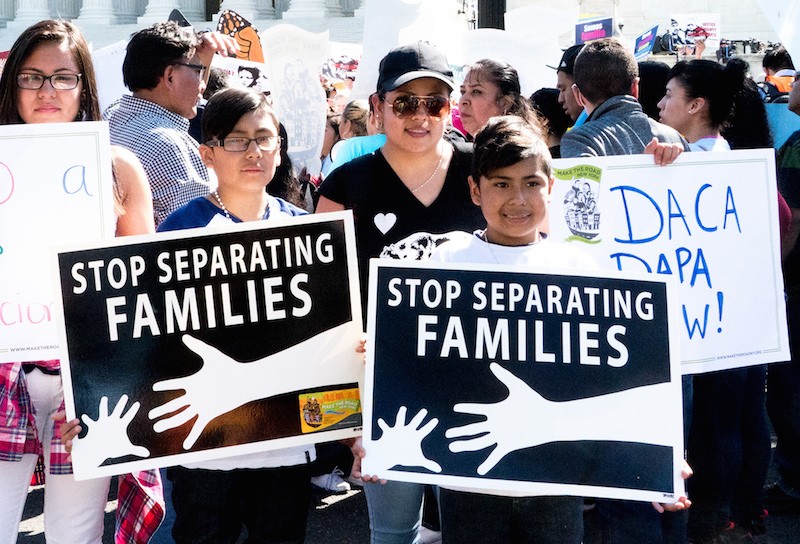 Yesterday, the Supreme Court deadlocked on whether President Obama’s executive actions on immigration are constitutional. While this may seem like distant politics, this 4-4 ruling could greatly affect the day-to-day lives of 5 million people currently in the United States. The case up for debate was United States vs. Texas, in which 26 Republican governors sued to prevent the implementation of Obama’s 2014 executive actions dealing with immigration. The actions, often known as DAPA/DACA+, would have protected up to 5 million immigrants currently living in the United States without documentation. But the Court, currently comprised of eight justices, found itself at an impasse. At the heart of these immigration policies is a simple idea: keeping families together.

Undocumented immigrants whose kids are U.S. citizens are in a bind. Do they stay in the United States and live under the constant threat of deportation? Do they move back to their countries of origin with their kids, depriving them of the benefits of U.S. citizenship and often risking violence? Or do they return to their countries of origin alone, splitting up their families and leaving their children to be raised by others? It’s a heart-wrenching situation that millions of people currently live in. DAPA, or Deferred Action for Parents of Americans and Lawful Permanent Residents, would have provided undocumented parents of children who are U.S. citizens or legal permanent residents authorization to work in the U.S. for three years at a time. (Once those three years were over, if the person hadn’t applied for a renewal, they would have risked deportation once again.) 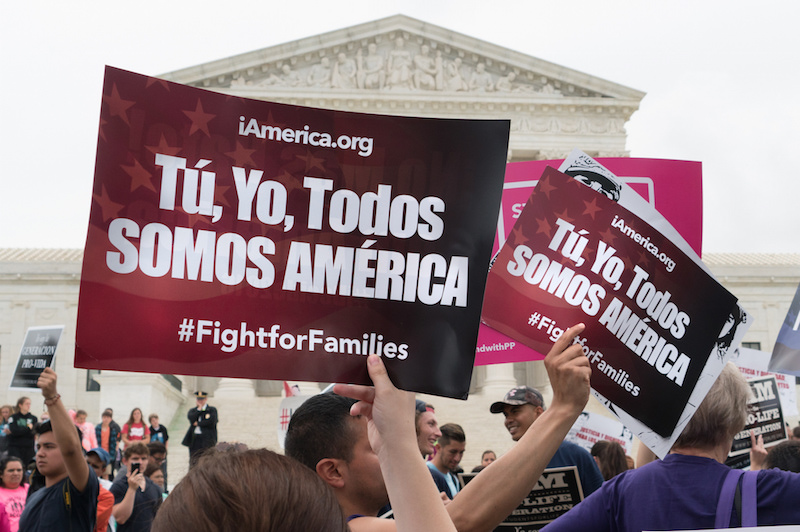 A rally outside the Supreme Court this week. Photo by Victoria Pickering.

According to Migration Policy Institute, more than 10 million people live in homes in which an adult might qualify for DAPA; 4.3 million of those people are children under the age of 18. If DAPA had not been put on hold by the Supreme Court’s deadlock, approximately 3.6 million parents would have been eligible. DACA, or Deferred Action for Childhood Arrivals, was created in 2012. Under DACA, immigrants who were born after June 15, 1981 and were brought to the United States before their sixteenth birthdays are allowed to apply for deportation deferrals and work permits. However, only young people who have been in the country since June 15, 2007 and are younger than 31 years old are eligible. Over the past three-and-a-half years, DACA’s protections extended to approximately 700,000 people, many of whom were able to get better-paying (and less exploitative) jobs, go back to school, and help support their families.

In 2014, President Obama tried to expand DACA. Under a plan that’s often referred to as DACA+ the president aimed to extend the cut-off date from June 2007 to January 2010. It would have also eliminated the age cut-off and increased the deportation deferral period from two years to three years. Both DAPA and the DACA+ expansion were put on hold before they could even start. In December 2014, Texas and 25 other states filed suit to prevent DAPA and DACA+ from being initiated. (The New York Times noted that fewer than half of eligible immigrants live in those states.) In February 2015, a federal judge agreed with them and issued an injunction preventing the government from moving ahead. The Fifth Circuit Court of Appeals upheld the injunction. This past January, the Supreme Court agreed to hear the case.

As the case has wound its way through the court system, deportations have continued. In 2015, 235,413 people were deported, a steep drop from the previous year’s 315,943 people. These aren’t abstract numbers—nearly each and every one of those people leaves behind family members, including children, who are devastated by their loved one’s disappearance. Actress Diane Guerrero, who plays Maritza Ramos in Orange is the New Black, was born in New Jersey to Colombian parents who overstayed their visas. She described the effects of her parents’ undocumented status—and the persistent fear of deportation—on her as a young child in a new memoir. “[M]y childhood was haunted by the fear that they would be deported. If I didn’t see anyone when I walked in the door after school, I panicked.”

When Guerrero was 14, those fears became reality: “I came home from school to an empty house. Lights were on and dinner had been started, but my family wasn’t there. Neighbors broke the news that my parents had been taken away by immigration officers, and just like that, my stable family life was over.” Even before that happened, she watched as her parents were exploited twice by unscrupulous attorneys who promised them green cards in exchange for huge sums of money and then disappeared into the wind.

Under DAPA, her parents—as well as millions of others—might have been able to gain authorization to work in the country rather than being abruptly severed from their teen daughter. But in 2000, no such program was on the horizon, let alone in place, and so her parents were ripped away from her and deported shortly afterward. Advocates have fought for years to halt the tide of deportations and detention. There’s an actual quota of how many beds in immigration detention must be filled each day. That number is 34,000. Under the rallying cry of #Not1More, immigration advocates—including those most at risk for detention and deportation—have held rallies, staged die-ins, held fasts and gone on hunger strikes. They’re determined to change the policies destroying their families and communities.

The federal lawsuit—and yesterday’s Supreme Court deadlock—means that millions of other families must live with the constant threat of deportation. While the original DACA passed in 2012 remains the same, but millions of undocumented people will continue to live with the fear of deportation. That also means that millions of family members will continue to live in fear that, one day, their loved one will not come home. That fear isn’t limited to children. Nadira Khanum, a member of the New York City-based DRUM-South Asian Organizing Center, is one of the many who fought for DAPA and DACA+. In DRUM’s press release about the Supreme Court’s deadlock, she stated, “We are tired of waiting to have justice in this country. We call on the President and his potential successors to take us out of deportation’s crosshairs. I should not have to worry about my husband being deported every minute of every day. We need a firm end to deportations before the President leaves office.”