Survived and Punished: How Criminalization and Incarceration Punish Abuse Survivors 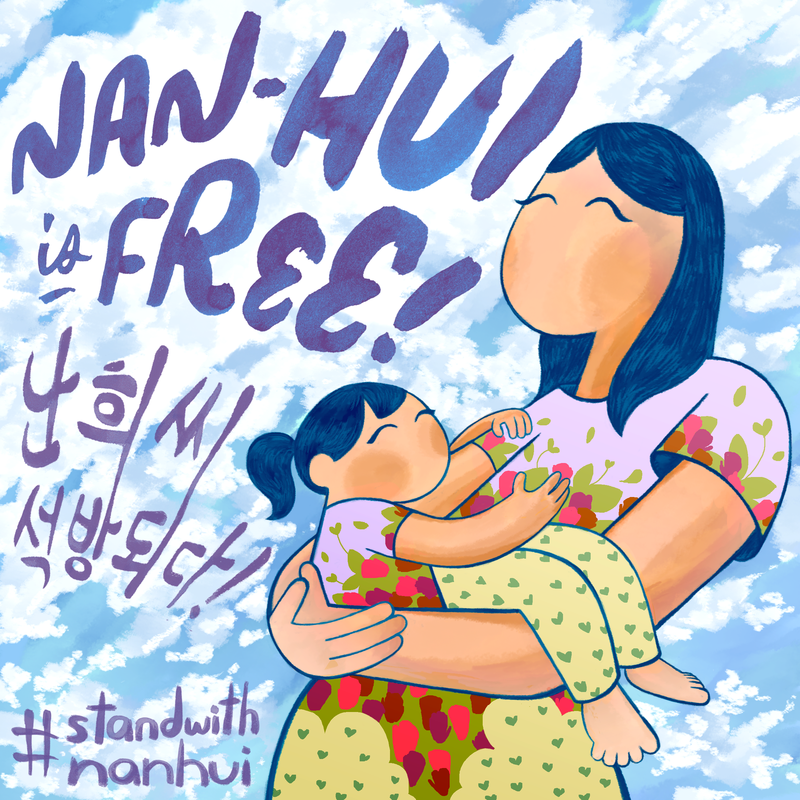 “Our criminal justice system should treat people fairly,” said President Obama this week during a panel discussion on incarceration hosted by the Marshall Project. He made a point to discuss the racial disparities in policing and arrests, noting that he had been stopped as a young man many times without cause.

That same afternoon, on the twitterverse, a different discussion about criminal justice reform was taking place. Using the hashtag #SurvivedandPunished, people explored and analyzed the intersections between domestic violence and incarceration.

October is Domestic Violence Awareness Month. The ongoing epidemic levels of domestic violence don’t get a lot of attention unless a video of a celebrity battering his partner goes viral.  Even then, the mainstream media narrative often focuses on domestic violence survivors as helpless victims. Much less attention is paid to survivors of violence who have been criminalized and incarcerated for fighting back.

This month, activists and organizers took the opportunity to highlight the connections between prisons, policing, immigration enforcement and gender violence. They’ve launched SurvivedandPunished.org, a website that spotlights individual survivors of sexual and domestic violence who are currently in jail, prison, or immigration detention. On October 22nd, which has traditionally been claimed as the National Day of Protest to Stop Police Brutality, they held a twitter discussion to highlight some of these survivors and to talk about the intersections between interpersonal and state violence.

The experiences of domestic abuse survivors in the criminal justice system landed on many peoples' radars thanks to the Free Marissa Now campaign. Readers may remember that, in 2010, Marissa Alexander fired a warning shot to stop her abusive husband from attacking her—she was arrested and sentenced to 20 years in prison, but after nationwide activism, her conviction was overturned. In 2014, days before Thanksgiving, Alexander accepted a plea bargain in which the 1,030 days she served count as time served and she spends two years on probation.

In Thursday's discussion, the Free Marissa Campaign asked an open question: “What are the connections between experiencing domestic violence & being targeted for incarceration?” The question elicited several examples of women who are locked up, sometimes after they called the police to protect them from abuse. 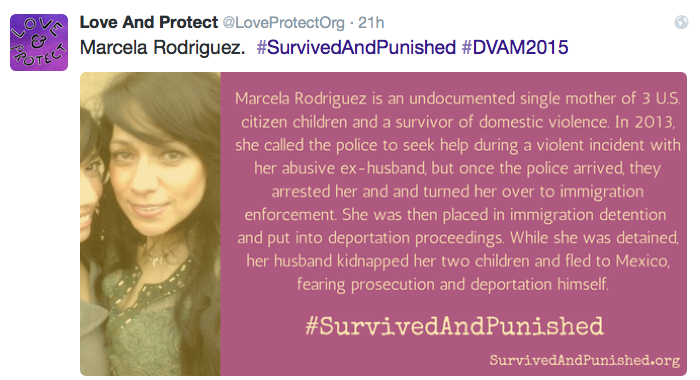 Others spoke from direct experience. 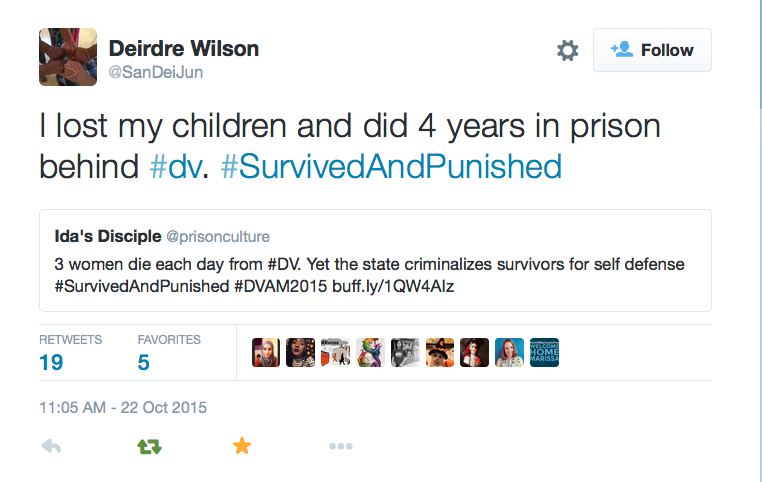 The conversation examined the intersections between reproductive justice, mothering, domestic violence and criminalization. Mothers who are abused are frequently punished by the legal system for the abuse of their children. 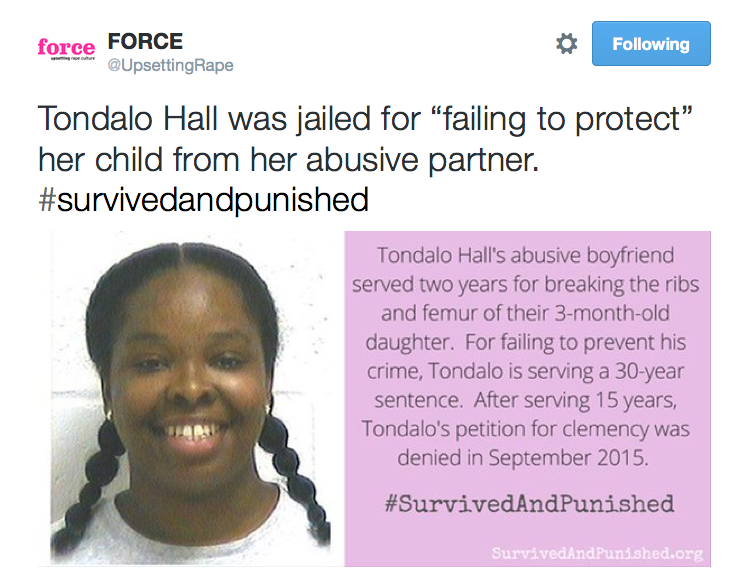 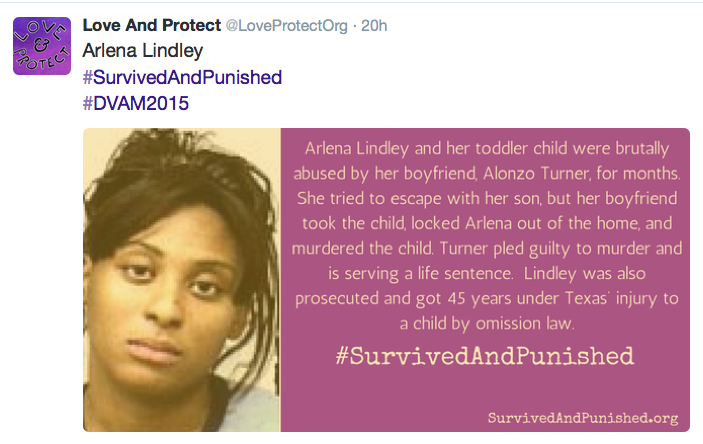 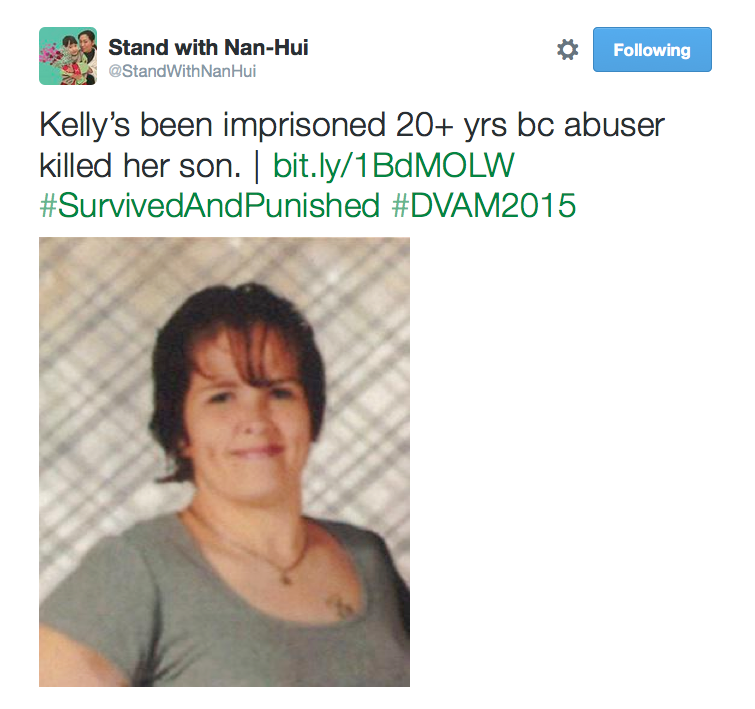 Mariame Kaba, who helped start the Chicago Alliance to Free Marissa Alexander in 2013, offered a chilling and horrifying graphic depicting how the legal system punishes domestic violence survivors under “Failure-to-Protect” laws, which charge parents (usually mothers) if their child is abused or harmed. 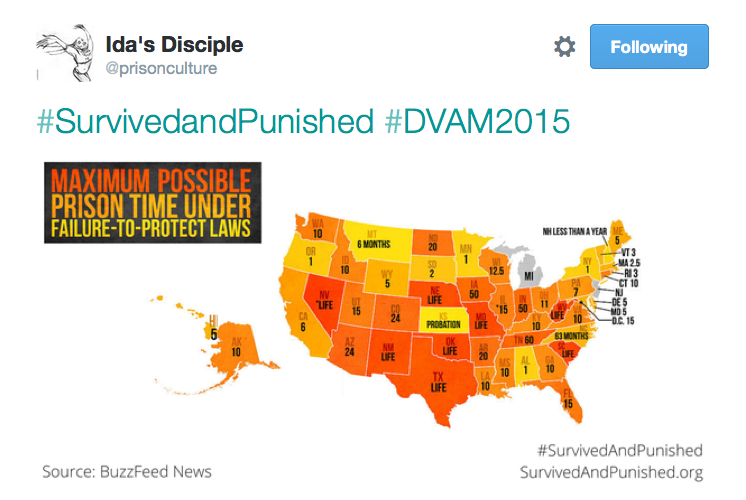 Dorothy Roberts, reproductive justice scholar, pointed out that blaming mothers for the violence inflicted by others masks structural and systemic injustices and lack of support.

Participants also challenged the dichotomy of “good victim” and “non-violent criminal,” which is often the litmus test for deciding who is considered worthy of support, whether from those advocating criminal justice reform or those working with abuse survivors.

Organizers with the Free Marissa Now campaign called attention to Yesenia Palencia, a lesbian from El Salvador who has been incarcerated in the Eloy Detention Center in Arizona for a year. Palencia escaped abuse and violence in El Salvador only to encounter it again at the detention center, where she has been harassed and sexually assaulted. She is awaiting a decision as to whether she will be allowed to post bond and, if so, how much that bond will cost. Meanwhile, the Arcoíris Liberation Team is raising money so that she can post bond as soon as it is decided.

They also raised awareness about Rajeshree Roy, a survivor of childhood sexual abuse and domestic violence, and a woman whose story should challenge the idea that only “good victims” and “nonviolent” people are deserving of our support. 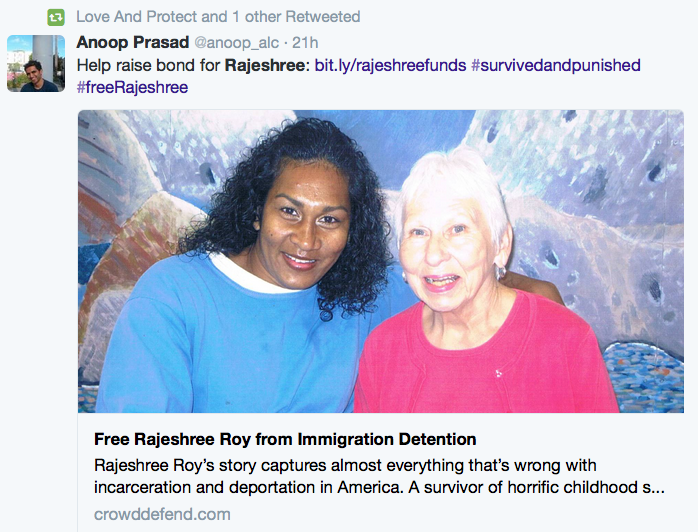 Born in Fiji, Roy was physically and sexually abused by her extended family since age five. Her father brought her to the United States eight years later. By then, the repeated violence and trauma had left her full of anger and sadness. At 16, she began running away—and robbing people to get money. She was arrested, charged as an adult, and sentenced to 15 years in prison.

At age 30, she was paroled. She found a job, got married and had three children. Then, her marriage turned abusive. Her life began to fall apart—she was no longer able to work, she was ineligible for public assistance, her car was stolen, and she was facing eviction. Then, she was arrested at a Wal-Mart for shoplifting a garden hose.  Because of her past record, the district attorney charged her with a felony and set bail at a million dollars. Roy eventually accepted a plea bargain of seven-and-a half years in prison.

Nearly three years later, after Proposition 47, reducing felonies such as minor petty thefts to misdemeanors, and was released from prison. But then, Immigration and Customs Enforcement (ICE) and taken to the Yuba County Jail, which rents out space for immigrant detention.  She has been given a ten thousand dollar bond, which supporters are working to raise.

I’ve said this before, but yesterday’s discussion reminded me (and thousands of others on Twitter) that survivors of violence are often re-victimized by the legal system. When we think abut the intersection, we need to think beyond this being the case of one bad apple or one insensitive prosecutor. Instead, we need to understand—and discuss—how the legal system reinforces and adds to the violence faced by survivors, particularly survivors of color.

This is only a taste of yesterday’s thought-provoking (and sometimes anger-inducing) discussion. If you want to know more, you can read both the archives of yesterday’s discussion as well as the ongoing conversation this month under the hashtag #SurvivedandPunished.

Related Reading: The Film The Pefect Victim Tells the Story of Women Who Were Imprisoned For Killing Their Abusers. 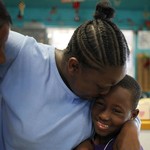 by Alexis Pauline Gumbs
Black mamas are sitting in prison awaiting trial for being too free.