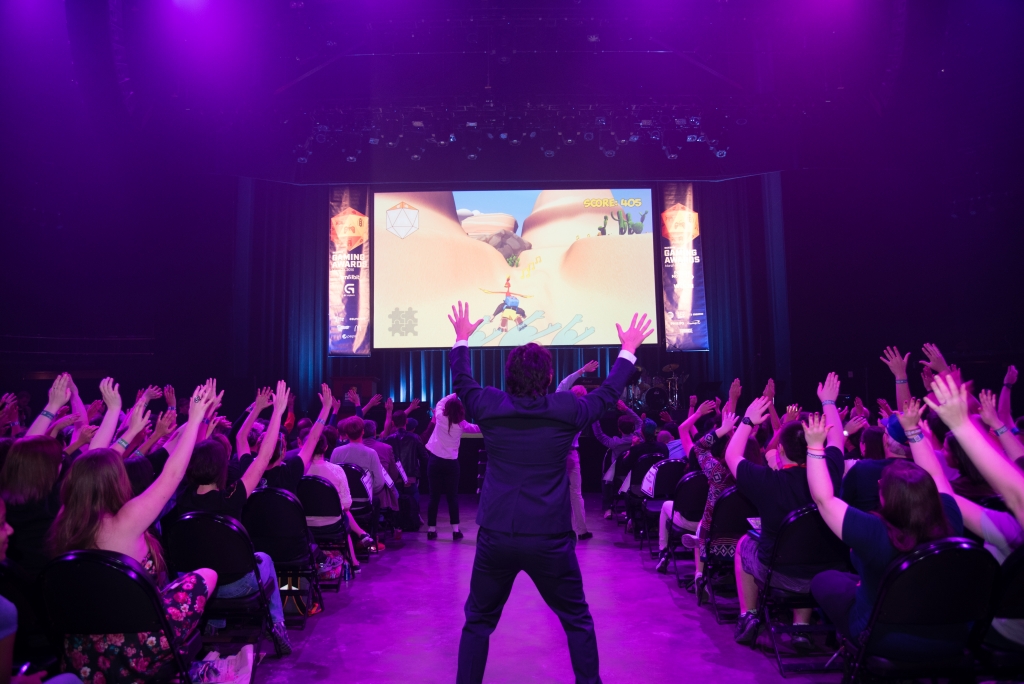 A scene from the 2015 SXSW Interactive festival. Photo by Sandra Dahdah.

Last week, the official branded innovation parade touched down in Austin, Texas. Lured by the promise of interfacing with virtual-reality gear, AI robotics, and apps—as well as the technosphere’s favorite bands, marketers, and entrepreneurs—self-described thought leaders made their annual Hajj to SXSW Interactive to “discover the technology of tomorrow, today.”

I arrived late to registration and joined the line of sweaty bodies snaking around the Austin Convention Center, waiting for our official SXSW Interactive Badges to transform us from average humans into people worth talking to. Forty-five minutes and a lower backache later, I was finally granted access to the exciting world of revolutionary technology, brought to you by McDonald’s, CapitalOne, Monster energy drinks, Bud Light, and Mazda. But far from a celebration of game-changing tech, I found SXSW to be a clusterfuck of branded spectacle that served mostly to make brand activation more palatable whilst keeping the future of digital tech steered along its current Moore’s Law trajectory of capitalist gain.

Brands come to SXSW Interactive to create their own narratives of the future and define what humanity’s progress will be. The panels and workshops (on everything from animated storytelling to establishing a digital legacy) provide the intellectual capital, start-ups bestow an air of authenticity, parties offer emotional and cultural weight (plus free food and booze), and established companies benefit from thousands of square feet of ad space and a captive audience for market testing. Together, their efforts function as a series of rituals designed to indoctrinate participants into a vision of an ever-more consumerist future.

Want to feel like you’re up on artificial intelligence? Go meet Sophia, Hanson Robotics’ AI robot, who can tell you all about the future of AI as she was programmed to do. If Sophia bores you, try AI Samurai. The “warrior without a sword” can tell you his favorite color and clock your position in the room. Want a pair of sunglasses that double as a bottle opener from a company you’ve never heard of? Sure! Samsung earplugs for all the concerts? Vital!

Once you’ve got all that sweet swag, you can show it off at Tumblr’s feminist party where you can take pictures next to cardboard cut-outs of Beyoncé. If parties aren’t your thing, maybe you can help USA Network “spread the revolution” by riding the giant Ferris Wheel erected in honor of their hit TV show about hacker activism, Mr. Robot. And while towering above downtown Austin, don’t forget to tweet your pics of passersby with #MrRobotSXSW to make sure everyone knows how much fun branded rebellion can be! 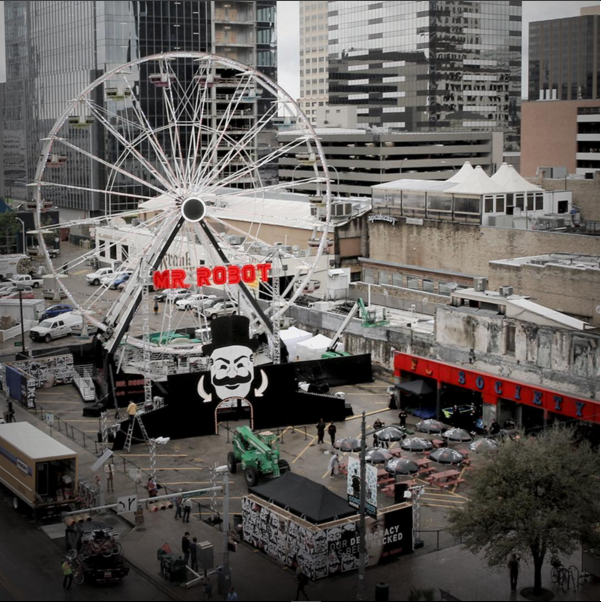 The punny caption for this photo on Mr. Robot's Instagram is: “So this is what a revolution looks like.”

After a few days at the tech circus (with nights of brand-addled music events in between), I began to experience what virtual-reality game designer Theresa Duringer called “the absolute retinal monopoly.” Referring to what happens when a player enters virtual reality worlds, Duringer noted that “VR is the only space where you can completely opt out of reality.” The prolific brand activation that suffuses SXSW offers the same experience and, notably, ends up shortchanging a festival that would otherwise be an important space for critical engagement with the latest developments on the tech scene.

The retinal monopoly, for instance, distracts from unmistakably real-world questions like: Why are there so few black people at SXSW Interactive? What am I giving away in exchange for all this free swag? Why did you choose to give that AI robot a gender? Or as the brilliant cultural critic and Daily Show producer Baratunde Thurston asked at the Interactive Innovation Awards, “Could we have machine-learned sexism?” As someone interested in how we disrupt the current state of tech via representation, design ethics, and feminism, finding real intellectual value at SXSW—not corporate diversity and branded feminism party lines—was not as easy as it should have been.

That’s not to say that SXSW was completely devoid of people engaged in designing tech with real social value. Tucked away in glittery trade-show halls and poorly attended online-harassment summits, were an important group of actual game-changers thinking up ways to reimagine the world of tech. I found them introducing their projects in conference rooms and whispering amongst themselves at parties, thinking up ways to bring a true culture of innovation to SXSW. But within the immersive, branded environs of SXSW, drunk on free beer and big hype, the background noise of design ethics, diversity talks, and feminist tech is quickly drowned out by euro dance beats.

But just because the volume is low doesn’t mean it isn’t there. To break out of our branded reality, which SXSW simply magnifies with great fervor, we need to amplify the voices of those who are marginalized by popular notions of innovation, and begin considering how technology is gendered, what is truly “disruptive” (and who gets to be called a disruptor), and how we can—and in many cases, already are—creating technology for social and economic benefit.

As Bitch Media's technology writing fellow, I want to highlight those voices. Stay tuned for the next post, where I’ll explore those hushed conversations in more detail.

Relevant: Hackathons This Week Aim to Add Hundreds of Female Artists to Wikipedia 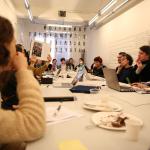 by Natalie Baker
Mad about the lack of female artists getting their due credit?