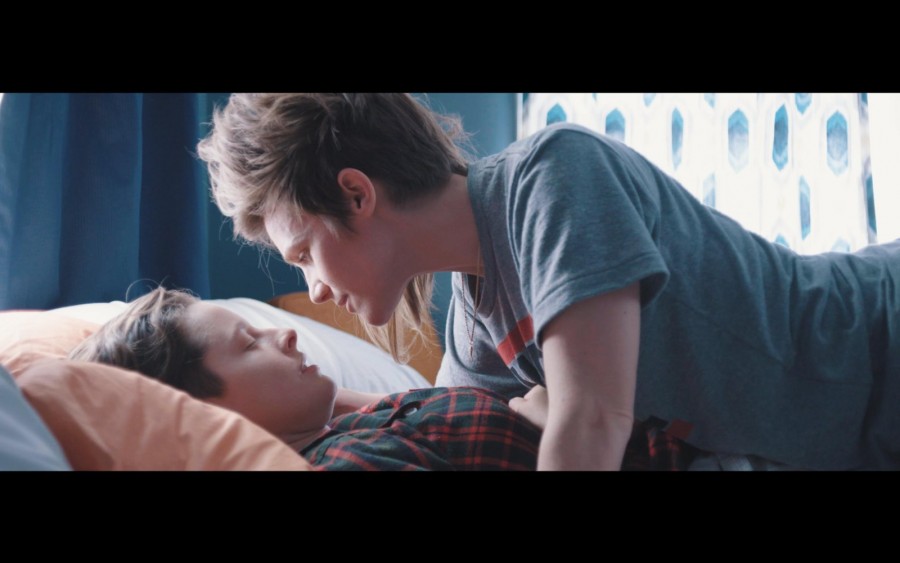 “Will we have sex in our TV show?” Rhea Butcher asks Cameron Esposito as they’re lying in bed at the beginning of the second episode of their new television show, Take My Wife. The show airs on Seeso, NBC’s newish digital streaming channel. “Yeah,” Esposito says, “like, a lot.” They go back and forth, debating whether or not it’s a good idea. Butcher points out that it will be weird because they’re real people in a real relationship, and Esposito argues that if they don’t do it, then there will be no real lesbians having sex on television, at least without dying. Then she continues on to list all the things that lesbians have done on television before their characters are killed. It’s scenes like this, which fuse a sweetly self-aware sensibility with a sly critique of popular culture, that make Take My Wife such a success. Esposito and Butcher offer up their personal lives as material and use the show to focus on topics of gender and sexuality more broadly.

The first season consists of six half-hour episodes that you should start watching right now. Somewhat similarly to Maria Bamford’s successful new show, Lady Dynamite, Take My Wife features consistent metanarrative: Its subject is two comics trying to succeed at their careers who know that they’re on a TV show and talk about how that TV show should function—and Bamford makes an excellent appearance on this show too as herself, performing as a guest on Esposito and Butcher’s weekly standup showcase. She gives Butcher advice about being a successful comic, runs an “office” out of wheelchair-accessible bathroom stall, and sings her mother a creepy, rasping lullaby over the phone.

As characters, Esposito and Butcher play up the aspects of themselves that they emphasize frequently in their comedy. On the show, Esposito is brash, self-involved, and, as several characters remind her, “kind of yelly, ”but she is always charming and well-intentioned. Butcher is anxious, self-effacing, and down-to-earth—likeable in a way that feels authentic.

The best and most interesting part of the show is the way they address uncomfortable dynamics in their own relationship. When the show begins, Esposito is more famous and successful than Butcher’s character, who is relatively new to the comedy scene. Butcher still has a day job, while Esposito makes enough money to work on her comedy full time—and their uneven statuses sometimes lead to conflict. Butcher is adamant that she wants to find success on her own terms, not because she’s with Esposito, but she still has to remind Esposito, “You have to stop telling people that I’m ‘trying to be a comic.’ I am a comic.” They also address the discomfort that results from Esposito making more money than Butcher. Esposito frequently offers to pay for things that Butcher couldn’t afford on her own, and Butcher struggles with whether or not to accept these offers and how her decisions will affect their relationship. These are tensions that real couples deal with all the time but that are rarely portrayed on television in such an honest way.

Although her comedy career is further along than Butcher’s, Esposito still struggles to command respect as a woman and a lesbian in the field and grapples with whether or not to play up those aspects of her identity in her comedy. In the first episode, she appears on a podcast and it doesn’t go very well. The screen is populated with insulting tweets accusing her of not being funny and not having any material other than her sexual orientation. The tweets are cruel and unfair, and I would bet they’re actual tweets that Esposito has received in real life. It draws attention to the impact that online commentary has on people’s real feelings, and Esposito is brave to make herself vulnerable in this way, sharing insults aimed at her comedy as she performs that comedy.

The show flags a little bit in the second half of the season when it gets caught up in unnecessarily complicated plotting and veers away from the more realistic portions of their lives. For example, an overwrought scene in which Esposito and Butcher get locked out of their house after leaving a friend’s baby inside drags on too long and feels more like a typical sitcom ploy and less like a scene from real life. Nevertheless, both are consistently charming and funny, and their onscreen dynamic keeps the show entertaining. A small group of supporting characters are also funny and sweet and weird, including Dave (played by Zeke Nicholson), Butcher’s goofy friend who is also a budding comic and a high school teacher, and Frances (Laura Kightlinger), their eccentric upstairs neighbor who’s a feminist artist. There are frequent appearances from well-known comic friends like Bamford, Mary Lynn Rajskub, and Paul F. Tompkins.

Take My Wife is an exciting addition to a growing roster of TV shows that feature great comedians who reflect the diversity of the scene. It’s hilarious, it’s honest, it’s sweet and realistic and fun and thoughtful and critical. It highlights the intersection of gender and sexuality with comedy and pop culture, and that’s important and meaningful, but it’s also just plain great. Everybody should watch it.