Do We Need to Calm Down?A Roundtable about Taylor Swift and Classism in Music Videos 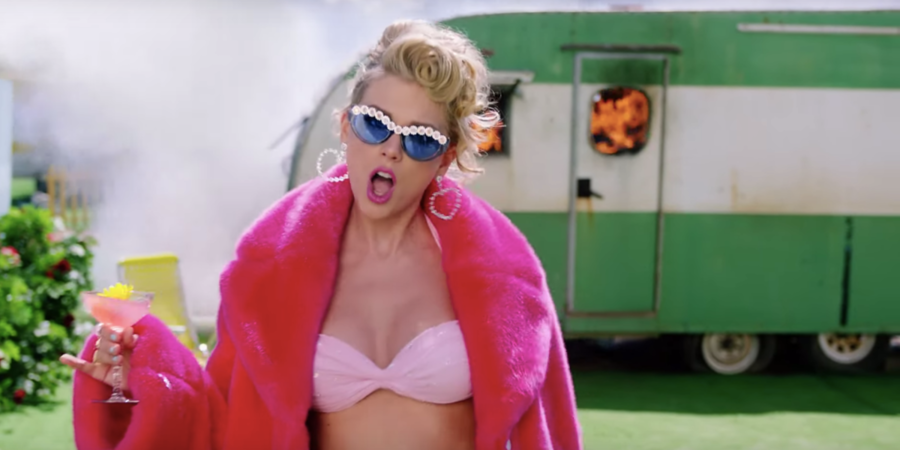 Taylor Swift in the “You Need to Calm Down” video (Photo Credit: Taylor Swift VEVO/YouTube)

Recently, Taylor Swift released “You Need to Calm Down,” the second single from her forthcoming album Lover. The video garnered mixed reviews: Swift seemingly paid homage to Pride Month, featuring endless cameos from LGBTQ celebrities, including Ellen DeGeneres, the entire cast of Queer Eye, and “Lesbian Jesus” Hayley Kiyoko. But the video also takes place in a trailer park with people who have markers that suggest they are less wealthy, like missing teeth and misspelled homophobic signs. With this video, Swift, who has been criticized in the past for being apolitical, is obviously trying to showcase her stake in the LGBTQ community. The song’s lyrics involve her using the word “GLAAD,” a call-out to the media organization formerly known as the Gay and Lesbian Alliance Against Defamation, instead of “glad,” and the end of video asks viewers to sign Swift’s Change.org petition about passing the Equality Act.

It isn’t beneficial to decide if the song and the video are “good” or “bad,” especially considering the continued speculation that Swift is using her Lover era to come out as queer. (This still hasn’t been proven and the continued commodification of the coming-out experience is definitely worthy of critique). Instead of speculating, I took note of the blatant classism and misguided Southern and rural stereotypes within the video, with all of the homophobes being uneducated, sloppily dressed, and poor. Twitter user Claire Gysegem called out the judgment of poor rural people as homophobes in Swift’s video, tweeting, “God, @taylorswift13, you were SO. CLOSE. The enemy isn’t poor rural whites in the trailer park that YOU took over. The enemy is the people in power. The men in suits in the conference rooms and the men in robes behind the pulpit preaching and legislating hate.” Gysegem later added, “Did you know that West Virginia has the HIGHEST CONCENTRATION of transgender teens? What kind of message were you sending with those protestors? Toothlessness and poor spelling? Stereotypes of hillbillies, really? But I didn’t see a representation of Mike Pence. Of Stephen Miller. Of Donald Trump. Because you took the easy route to illustrate poor people as the enemy.”

Gysegem’s tweets were picked up by Queer Appalachia, an Instagram account that seeks to serve as a source of community and start important conversations about the classist, and often simply false, way that rural people are often viewed. The Instagram post garnered over 30,000 likes, with many commenters illustrating their clear frustration with how rural and Southern people are often positioned as if they are never queer, trans, or people of color, but simply, as Gysegem said, the “enemy” of progress for marginalized people. I spoke with Gysegem, a queer content creator, and Ani Naser, a queer, nonbinary filmmaker of color based in the South, about Swift’s video and why musicians continue to perpetuate classism in their music videos.

Rachel Lewis, senior editor: The aesthetic of “You Need to Calm Down” felt unnecessarily anti-Southern and classist to me as a queer person living in the South. What was your immediate response to the music video?

Claire Gysegem: I’ve [long] been indifferent to Taylor Swift, but I had my hopes up [when] I went to watch the video. I love Billy Porter and Jonathan Van Ness and [I] was excited to see them, but I raised my eyebrow at the fact that they were all in airstreams. I thought it was a campground/vacation kind of thing, [but] I felt sick to my stomach the second I saw protestors in the video [who] were marching [in] the trailer.

Ani Naser: I agree that the music video can [be] read as [a] demonizing [of] lower-class Southerners. [After] growing up in Texan suburbs, I can say that the vast majority of homophobic and discriminatory people I’ve encountered are affluent white men followed by affluent white women. It’s not difficult to see how a multimillionaire celebrity like Swift could [end up] assembling a cast of the more commercially successful LGBTQ artists in the media landscape and, [in the process] vilify visibly poor southerners rather than Fortune 1000 CEOs.

CG: I don’t think she [intended to] portray homophobes as poor people. Honestly, I think she was [just] lazy and didn’t think it through. It was easy for her to punch down and “otherize,” but it’s a bit more difficult to “otherize” middle-school bullies, hateful church-goers, and politicians. After all, how are you going to make fun of things like their teeth and lack of proper education?

RL: Much of the issue with “You Need to Calm Down” is visual, rather than in the lyrics themselves. Talk me through your thoughts. Why is the video so much more problematic than the song?

CG: We remember more of what we see than what we hear. People are hungry to see themselves reflected in pop culture. It’s so important, especially for young kids. We are learning the consequences of lack of proper representation in the media, the lack of context in news stories, and the power structures that keep all those strings in place. Swift’s video is a key example of how powerful visuals can be. The colors, the makeup, the clothes. Seeing Ellen get a tattoo. People talked about that for days!

AN: I had a conversation around the time the video first came out with my sister, a queer woman of color and avid Swift fan, about the discourse itself. My sister and I have vastly different tastes in music, and as a result I’ve developed an idea of, “Just let people like what they like as long as it’s not hurting anyone.” Allyship is complicated. I’ve noticed [online that most people are asking], “Can Taylor Swift make a queer anthem?”

CG: I wonder how different the video would’ve been if these queer icons, in all of their elegance and power, had been shown celebrating their love and identity in places like a voting booth, a place of worship, or the Capitol steps. I received a ton of backlash on Twitter from those who said that it’s the people represented in Swift’s video who keep people like Mike Pence and Donald Trump in power, when, in reality, the U.S. Census shows that only one in four people making less than $10,000 vote. People with low incomes have an incredibly difficult time voting, especially in Appalachia. If you live in a state with a voter ID law, if you don’t have access to reliable transportation, if you can’t take off work, if you have a poor education—these are all reasons why we see a lack of voter turnout in lower-income brackets. Many people in Appalachia have a strong distrust of government due to past exploitation of workers and natural resources. Also, there are gay people in Appalachia. West Virginia has the highest concentration of transgender teens. We have Drag Queens & Kings who get their makeup from Dollar General. My local LGBTQ organization is working desperately to reach youth in rural counties. This is what runs through my mind when I get responses [suggesting it’s not that deep]. It is.

AN: Swift seems to find herself in an intriguing position where, in 2016, her apolitical stance garnered controversy, especially as alt-right white nationalists began to idolize her. In many ways, the [video] seems like her effort to denounce that and genuinely seems like an effort to take on social responsibility, as she’s [increasingly] aware of [the] influence [of] her platform. 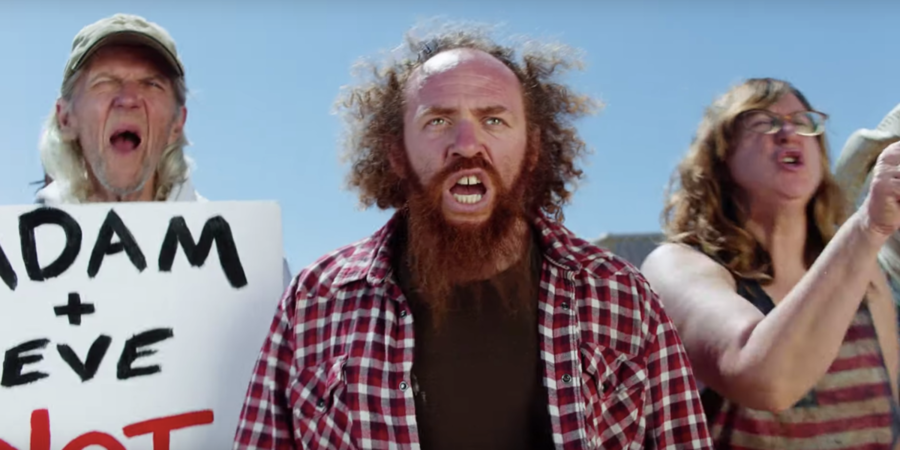 RL: We know that what we read and see onscreen has a huge impact on how we understand our own identities. What role, if any, do celebrities like Swift play in shifting the pervasive nature of these stereotypes?

AN: If, for example, [Swift] were to create a somber “Take Me to Church” type ballad about how difficult being gay is, she’d rightfully receive criticism for dramatizing an experience she’s never had. If she were to do nothing, she’d receive the same criticism for not using her platform for good. All in all, I think she [and other celebrities who make statement videos like these ones] fall into the bottomless pit of not being woke enough. I think the discourse [about Swift] lacks an idea of what we actually want from [her]. Do we want her to stay silent and give up her platform to queer and trans artists of color? Do we want her to write a catchy, entertaining pop song that fully captures the nuances of homophobia? In my eyes, she’s done a significant amount to not be problematic. She produced the song and video with Todrick Hall, brought in myriad influential QTPOC [figures], and donated significant amounts of money to LGBTQ organizations. Did she create something groundbreaking that liberated queer and trans people of color? Did she create an era-defining gay anthem that’s universally likable? No, but why should we expect her to?

AN: If you don’t like the music, [then] you can simply not engage with it. You can choose to engage with and promote the artwork of LGBTQ artists you support, but criticizing Swift for not being “woke enough” ultimately does less for the LGBTQ community than the $113,000 she donated to the Tennessee Equality Project.

CG: Swift really tried to lend her platform with this video and ended up isolating other marginalized groups. But the Knowles-Carter family knows how to do this right. [For example, videos like] Beyoncé ‘s “Formation,” Beyoncé and Jay-Z’s “APESH*T,” and Solange’s “Losing You” [navigate class in a more successful way]. I think it’s important to note how sometimes, especially in music videos, representation of “wealth” can serve as an example of showing your worth as a person or a people, challenging the wealthy white power structure, and reclaiming what has been taken away from you.

RL: Moving forward, how would you like to see artists discuss issues like this in music videos?

AN: Do we really expect Swift to show the nuances of homophobia? I’m not saying that we should excuse it completely, but given that culturally we have bigger fish to fry and she’s doing less harm than good, maybe it’s not the worst idea to let this one go and focus more on fighting the more tangible impacts of explicitly homophobic characters across our political and media landscapes.

CG: Yes, people have experienced hate from those who look like the protestors in Swift’s video. It is very important to recognize and not silence their pain. I made the mistake of not recognizing that in my original tweets; I certainly don’t want to invalidate anyone’s experiences. The horrible part about this is, people have also experienced hate from preachers in robes, politicians in suits, [and] middle-class parents. [A work that navigates this space well is] Wrabel’s really personal and intense video [for] “The Village.” A trans teen is navigating his way through transphobic family life, high school, and of course dealing with the overpowering political discourse. The video calls out Trump by name. But Wrabel’s lyrics, “There’s something wrong with the village,” is excellent because it holds us all accountable in creating a world that celebrates everyone’s identity.

Read this Next: BitchTapes: Southern Pride 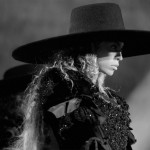 by Evette Dionne
Celebrating artists who take pride in their Southern heritage and espouse it in their music.