The Price of Activism, According to Teen Vogue 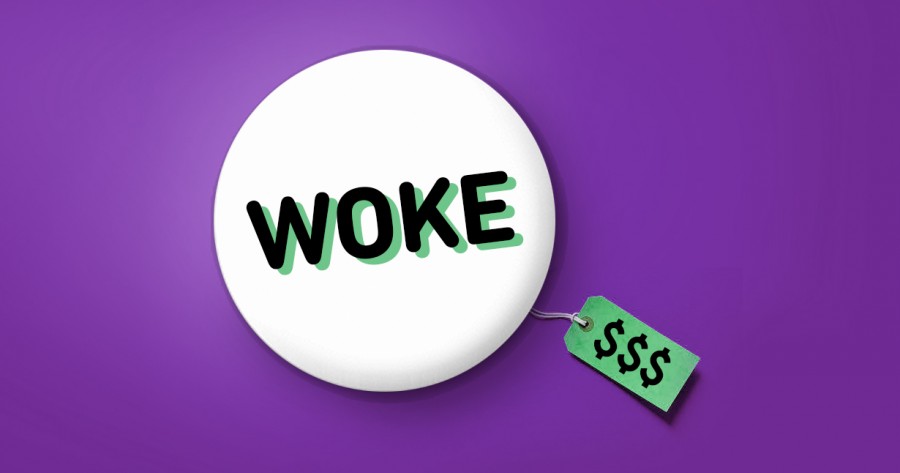 Shortly after Condé Nast appointed Elaine Welteroth as editor-in-chief and Phillip Picardi as digital director of Teen Vogue, the magazine became explicitly political. Some people were alarmed by this change, expecting a teen-oriented magazine to publish “makeup tutorials and One Direction interviews,” not essays about gaslighting. Elizabeth Johnston, a “concerned” mother, burned her daughter’s copy of the magazine after reading an article about demystifying anal sex. “I cannot believe what this Teen Vogue piece of trash has printed in its June edition,” she told Life Site News. “They are teaching children 11 through 17 [years old]—that’s the target audience—how to be safely sodomized.” Others called the magazine’s new political stance leftist, partisan, and cringe-inducing. Despite their discomfort, the magazine’s readership has vastly increased since it went in this explicitly political direction. As of January, the magazine’s online reach has increased from 5 million to 7.9 million, according to The Business of Fashion. Teen Vogue’s readers, who Welteroth said are between the ages of 18 and 24, appear to support the brand’s shift.

Teen Vogue could use its platform to connect activists to influential individuals, media coverage, and finances, but the magazine is invested in making money, not inducing real change. Condé Nast—the magazine behemoth behind Teen Vogue as well GQ, Self, The New Yorker, Vogue, Glamour, W, and Allure—was facing considerable decline in 2016. After shuttering Details in 2015, laying off five Glamour staffers in 2016, and cutting staff at other titles, the publisher restructured into five big departments—business, editorial, research, technology, and creative—to streamline job duties and lower costs. Teen Vogue’s success offered a chance at transforming their fortunes. Through Welteroth and Picardi’s leadership, Teen Vogue hit the 10 million unique users mark and increased digital traffic by 200 percent. Yet Condé Nast reduced the magazine’s print publication to quarterly, and they recently shuttered it entirely.

With Teen Vogue—and now Allure and Them—Condé Nast has increased its readership and profits by using “activism” to engage youth, a coveted demographic that the publishing company wasn’t able to fully lock in with its other titles. Teen Vogue had been doing considerably well since its inception in 2003. However, around 2010, social media and increased use of smartphones made it harder for print magazines to keep youth engagement. Companies that advertised with print magazines followed their target market to the digital world. Ad spaces in the magazine reduced from 162 pages to 112 pages between 2013 and 2015. 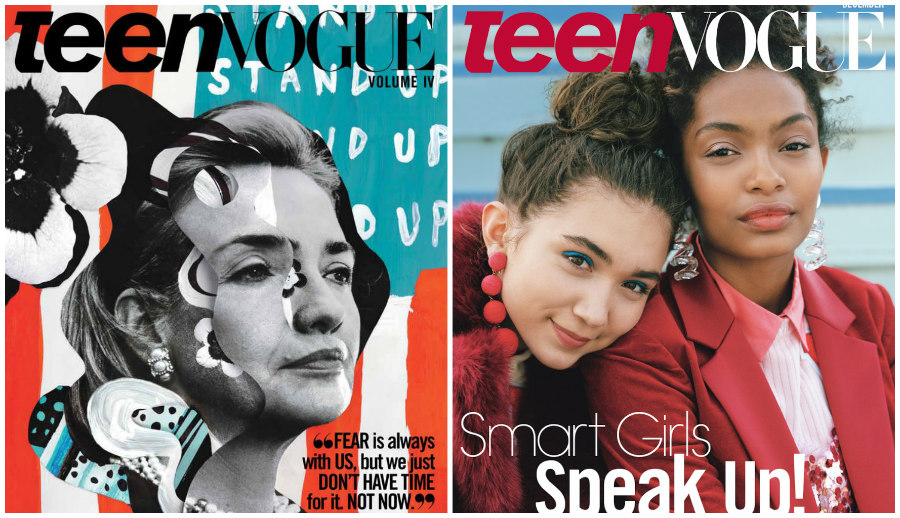 Considering that Teen Vogue’s ad spaces reportedly average between 56,000 to 195,000 for spaces ranging from one-third page to full-cover ads, this decline posed a serious problem for Condé Nast. With Picardi’s digital savviness and Welteroth’s passion for activism, the magazine got a chance to redeem itself. Although their broadened scope pissed people off, Kim Kelleher, CEO of Condé Nast’s Women’s Group, told The Business of Fashion that advertisers are now seeking to align themselves with the brand’s “wokeness.” While Welteroth and her team might desire to spark a personal revolution for their readers, Condé Nast’s decisions are still rooted in capitalist profit.

When asked about the next steps for Teen Vogue, Welteroth told the New York Times Magazine, “We’ve come to stand for something, and it has resonated. So Phase 2 of Teen Vogue’s evolution is activating this audience that we’ve galvanized. I see that happening through live experiences, products, and services. You’re woke. Okay. Now what?” This shift includes a convention, a future line of Urban Outfitters merchandise, and television appearances like Welteroth’s recent cameo on black-ish. This path will undoubtedly exclude readers who can’t afford the activist lifestyle Teen Vogue is peddling. The magazine itself is accessible since it’s becoming increasingly more digital and only retails at $10 for a one-year subscription and $15 for a two-year subscription. But their activism is clearly for those who can afford merchandise and summits.

Partnering with Urban Outfitters—a company that culturally appropriates communities of color and gentrifies urban communities—is in direct contrast to their supposed goals. In 2012, the Navajo Nation filed a trademark case against Urban Outfitters, and the company has also been criticized for selling offensive merchandise, including an Obama/Black t-shirt, Holocaust-reminiscent tapestries, and “Victimized” Palestinian t-shirt. Urban Outfitters and Teen Vogue have previously collaborated on a launch party, a series about art and activism, and The Teen Vogue Handbook: An Insider’s Guide to Careers in Fashion. I expect that, similar to their social justice coverage, the merchandise will be “witty, lighthearted, and fun.” The Chicago meetup had tons of swag, including buttons reading “woke,” “activist,” and “radical self;” tote bags with “activist, innovator, creator” scribbled on them; and copies of the magazine’s “Icon” issue. But making merchandise in support of marginalized people with a brand that is constantly trampling on the rights and humanity of said people is contradictory.

For those who can’t attend the official summit, Teen Vogue will have nationwide meetups, priced at $35, that will allow young people to hear live conversations about activism and intersectionality. The magazine also ran a promotion with StepUp to offer 50 people—about five percent of the expected attendees—the chance to attend at no cost. “Regarding the summit ticket prices, we’re thrilled to offer a two-day all-inclusive event for a price that is actually lower than many—if not all—similar conferences out there. However, we do have generous underwriting in place for people unable to cover the costs and we hope that if you are interested in coming to the Summit in LA that you will submit an application for that opportunity,” a representative for the magazine told me.

The summit promises attendees an opportunity to network with big names and brands, which is essential for organizers who want to facilitate change by rallying more privileged and influential people to fight for a cause. With that price tag, however, Teen Vogue is attempting to turn activism into an “elite club.” Elitism is part of what sustains and drives capitalism, and exclusionary events only lead to the further neglect of marginalized people and perpetuate echo chambers where only privileged people are conversing about the groups they are seeking to help without hearing from them. In February, writer Christina Ling argued that today’s youth are preoccupied with activism, which is fueled by tech and subsequently social media and big consumer brands. Ling’s analysis is spot on.

Brands have noticed that millennials are invested in social justice, and have begun marketing products that feed their desire. For instance, Dior sold $710 shirts with “We Should All Be Feminists” written across them. Admittedly, a percentage of the proceeds were donated to Rihanna’s nonprofit, The Clara Lionel Foundation, but that doesn’t cancel out the cognitive dissonance of selling a shirt that calls everyone to feminism while ignoring the fact that the majority can’t afford to buy a $710 t-shirt. Activism is altruistic, making it impossible for brands to earn profit without compromising the needs of the marginalized people that many activists are fighting for. These compromises come in the form of settling for poor representation, a lack of inclusion, and solutions that only tackle the surface problem and not the root. If Teen Vogue can get its readers to buy tickets to the summit, they will lock in a market that, in theory at least, will buy whatever they sell—in this instance, “wokeness.” While these readers care about activism, Teen Vogue has a vested interest in connecting them to brands that can capitalize on them.

On Twitter, Rookie’s founder Tevi Gevinson encouraged young people not to be swayed by companies who are marketing wokeness because they understand “the rising currency of feminism.” She also explained that it’s very easy for consumers to confuse fiscal interest with moral interest as the cultural currency of feminism continues growing. Beneath the nice exterior of a “feminist” summit, Teen Vogue will be able to use a $299 price tag to solidify its existing fan base, gain new subscribers, and generate revenue through the sale of tickets and advertisements for its stakeholders. Simply put, Teen Vogue’s summit will convert social currency to real currency. Other magazines, including Marie Claire and Vogue, have planned similar conferences that put a price tag on “empowerment.” Usually, the magazines invite big-name players to attract audiences, but don’t actually facilitate empowerment through those resources.

“Activism” is the theme for Teen Vogue’s summit, but will people actually be given tools that will help them fight for structural changes in their communities? Vincent Irving, a community outreach manager who works with youth, said that teaching effective activism strategies and approaches to community engagement via old and new media are essential to engaging youth activists. He also stressed that an avenue to apply these skills must be provided in order to maintain interest in activism. Beyond curating a network of wonderful industry professionals, Teen Vogue must create avenues for their young readers to “do more” in their communities than wear Urban Outfitters merchandise. Companies will do anything to earn a “woke” badge because they understand that young adults are more likely to give their disposable income to companies who present themselves as socially conscious, and so they doctor their products as “revolutionary.” The ugly truth is that following market trends is business—nothing more and nothing less.

Companies don’t necessarily care about the issues activists are fighting for. When Pepsi, earlier this year, debuted a commercial depicting Kendall Jenner as a model who ends a protest when she offers Pepsi to a cop, the backlash was intense and immediate. The commercial mocked the Black Lives Matter movement by implying that a Pepsi was all cops needed to unite with the masses. The commercial insulted demonstrators like Ieshia Evans, who was arrested in Baton Rouge, Louisiana, while protesting the killing of Alton Sterling by police officers. Pepsi apologized and pulled the commercial while Jenner remained mum until she shed tears during the premiere of the tenth season Keeping Up with the Kardashians. Similarly, L’Oréal hired Black trans model Munroe Bergdorf for a “diversity campaign,” but fired her when she condemned white supremacy.

Teen Vogue is not the only brand commercializing activism. If activism continues being commodified, it will drown out the voices of those who are actually fighting for marginalized people. Activists, who do the tireless, often thankless work of educating their communities about oppressive systems and pushing for reforms, will bear the cost of corporations capitalizing on their pain and labor while refusing to learn about and understand the causes they’re fighting for. For these activists, the costs usually look like unrewarded emotional labor, ostracization, and loss of jobs/corporate punishment. In the age of tech, activism already gets a lot of critique as being performative. This is partly because it is hard to convey our intentions through mediums that generate and encourage social currency/capital. However, these brands, including Teen Vogue, must do the extra work of checking themselves and the systems they perpetuate. Brands prettying activism up and selling it harms marginalized people and puppets their issues for revenue. 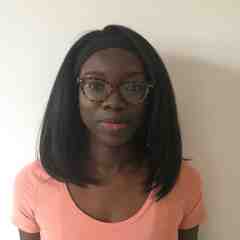 Adedoyin "Ade" Adeniji is a freelance writer based in Chicago. Her writings are frequently about race, womanhood, mental health and popculture. When she's not writing, you can find her downtown at Magnificent Mile, ViVi's Bubble Tea or at home binge-watching TV Shows. She also works as an Independent Style Consultant for woman-owned Chicago design brand, X by Angela Wang. Connect with Ade via her website http://www.adeaday.com