"The Africa That I Know" | Bitch Media 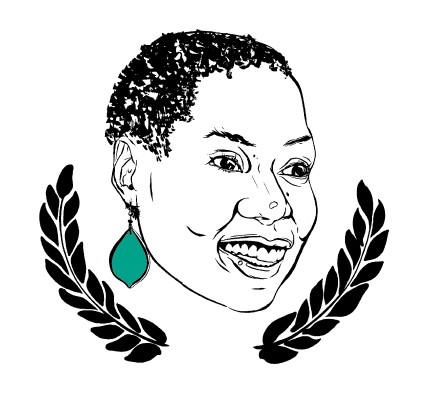 The setting is 35 years after World War III: The Water War. A society felled by ecological destruction has been relegated to a subterranean existence, and citizens' movements are strictly regulated by an authoritarian government propagating a single message: “The outside is dead.” Then a young scientist named Asha discovers a sprouting seed, sparking a journey that will force her to defy her superiors and abandon the world she knows for a chance to prove that there is still life above ground.

The dystopian narrative may sound somewhat familiar to American moviegoers; it might be the latest film from James Cameron or David Cronenberg. But Pumzi is an independent film written, produced, shot, and set in East Africa.

Science fiction isn't a genre typically associated with African film. South Africa's District 9 is the continent's only sci-fi flick to have reached a mainstream international audience. Nairobi-born director Wanuri Kahiu is changing that.

Not only has Pumzi been hailed as Kenya's first science-fiction film, it has also garnered attention and critical acclaim at numerous international film festivals. It debuted in January 2010 at Sundance as part of the festival's New African Cinema program, and spent the rest of that year accepting a slew of awards, including Best Short at the Cannes Independent Film Festival, the Special Jury Prize at the Zanzibar International Film Festival, and the Silver Prize for Best Short at the Carthage Film Festival in Tunisia.

The first threads of the film's storyline were pulled from a dark joke between Kahiu and some friends—what if humanity was cut off from nature and forced to buy fresh air? That spark of an idea connected with Kahiu's deep passion for environmental sustainability, and became the center of the powerful 20-minute short, whose title translates to “air.”

Kahiu is no stranger to international recognition. Her 2009 film, From a Whisper, took home 14 awards at seven international film festivals that year, including Best Picture and Best Director from the Africa Movie Academy Awards and Best Picture at the Pan-African Film Festival in Los Angeles. And the 30-year-old filmmaker has already wrapped her chops around her next project, the forthcoming documentary Ger, which follows child soldier–turned–actor and model Ger Duany as he returns to Sudan from the United States for the first time in 18 years, and documents his journey of determination to find the family he has not spoken to since his departure and to vote for an independent Southern Sudan.

I caught up with Kahiu a few days after she returned from filming in Southern Sudan during the region's tense, and at times violent, January 2011 referendum on independence to discuss her passion for telling stories that are not just “African,” but human (or alien, as the case may be).

You filmed in Southern Sudan during the region's weeklong referendum on whether to separate from the north; the vote was overwhelmingly in favor of an independent Southern Sudan. What was it like shooting a film in that context?

It was completely unpredictable. It was myself, Marius, the camera person, and Ger [Duany]. None of us had ever been to Southern Sudan before except for Ger, who'd left 18 years ago. We really didn't know what to expect.

It's an incredibly hard place to shoot. The moment [we] picked up a camera, we got into a fight with a local, who didn't know who we were or where we were coming from. [But] it was amazing. This is the first time that Ger's actually had time to reconnect with his family, his people, and the land. You forget this, as somebody who's not in a war-torn country, [but] Ger's mother and uncle did not expect him to be alive. So even when they spoke to him on the phone the first time, they were like, “No, you're lying to me. Until we see you in person we don't believe it's Ger.” Because many times in the north, people would die without their families knowing and other people would try to replace them or would speak on their behalf. So they did not believe until they actually saw Ger. To see that happen was amazing.

How do a Nairobi city girl and her camera end up roughing it in the Southern Sudanese bush at such a pivotal, yet unpredictable, point in the area's already-volatile history?

When I was 16, I knew I wanted to make films. I walked into a place that made documentaries, it was a company called Ace Communications [in Nairobi]… and I just thought, “Wow! People make films!” It hadn't occurred to me before.

When I went to study, in England, at the University of Warwick, I started looking for any and every internship that would take me. When I was on set, I knew what I wanted to be. I wanted to be the guy who called out “Action!” and “Cut!” I don't know how to say it nicely, but I'm a power freak! [Laughs.] I wanted to be the person at the center who controls all the power. It just seemed perfect for me.

After you finished school in England, you went to the University of California, Los Angeles, where you completed a Master of Fine Arts in film directing. While you were there, you worked on films like the remake of The Italian Job and Catch a Fire. Did you ever consider staying in the United States?

From the moment I entered UCLA, I knew what kind of filmmaker I wanted to be. I knew I wanted to make films to take back home. Or films about people back home. And when I tried to write when I was in America, I inevitably found myself writing about films or about characters that were very, very African. So it just didn't make sense for me to stay.

And even if I had stayed, I would never be able to be the kind of director that I wanted to be. Because [in Hollywood] you have to work your way up, [whereas] you can come to Kenya and just be a director! You're at the top of the food chain a lot quicker.

That sounds like a pretty good deal. Have you found any other particular opportunities or challenges working in the Kenyan film industry, as opposed to Hollywood?

What's been really great is that the majority of the filmmakers coming from Kenya are women. So, that's broken all those barriers of “What's it like to be a woman [in the film industry]?” 'Cause my standard answer is that I've never been a man.

In some of your previous interviews, you've said that you want your work to be evaluated against criteria for good cinema writ large, as opposed to cinema that's good “for a girl.”

I think that it's so easy to pigeonhole people into boxes and say, “Oh, it's African!” [With] female filmmakers, it's the same thing—it's like putting a cap on imagination. And especially [with] Pumzi, it happened… People so did not expect a science-fiction film out of Africa. Let alone East Africa. People would ask me things like, “With so many other films to make, why would you make a science-fiction film?”

What does that mean? Does that mean that because I'm from a certain region, I have a limited capacity of imagination? And once that's reached, I can't go further? I can't possibly imagine that there'll be African women in the future and tell a story about that? That makes no sense to me.

What made you want to delve into science fiction, a genre that is quite underrepresented in African cinema?

I didn't choose the genre. I started writing a story about a girl set in the future, and I didn't know I was writing science fiction. I'd never dealt with science fiction. I'm not even a science-fiction buff. I think it was the film that chose it. I like to create a world, and more than anything that's what really excited me about Pumzi.

Pumzi was incredibly well received internationally, snagging the Best Short Film Prize at the 2010 Cannes Independent Film Festival. What do you think made Pumzi stand out from the other films it was up against?

I think, first, the story. I didn't dwell on Africa's past or Africa's present. Also, I think it was timely. It has such a strong environmental theme in it. And it has a beautiful actress, which doesn't hurt. [Laughs.]

It seems like it's the story itself, far more than any particular genre or style, that fuels your films. What sorts of stories do you see yourself telling in the future?

I want to make a love story, just because people laugh, and cry, and wake up, and make love, and have lovers, and divorce [in Africa] just like anywhere else in the world. We just don't hear those stories. I want to tell stories about the Africa that I live in. The Africa that I know. The Africa that has every sort of person—every woman—you can find imaginable. The lgbti community here, everything. I make my films because I'm proud of where I live and I'm proud of the people that I know.

This article was published in Reverb Issue #51 | Summer 2011 Subscribe »

Relevant: The Beautiful Brilliance of "Insecure"