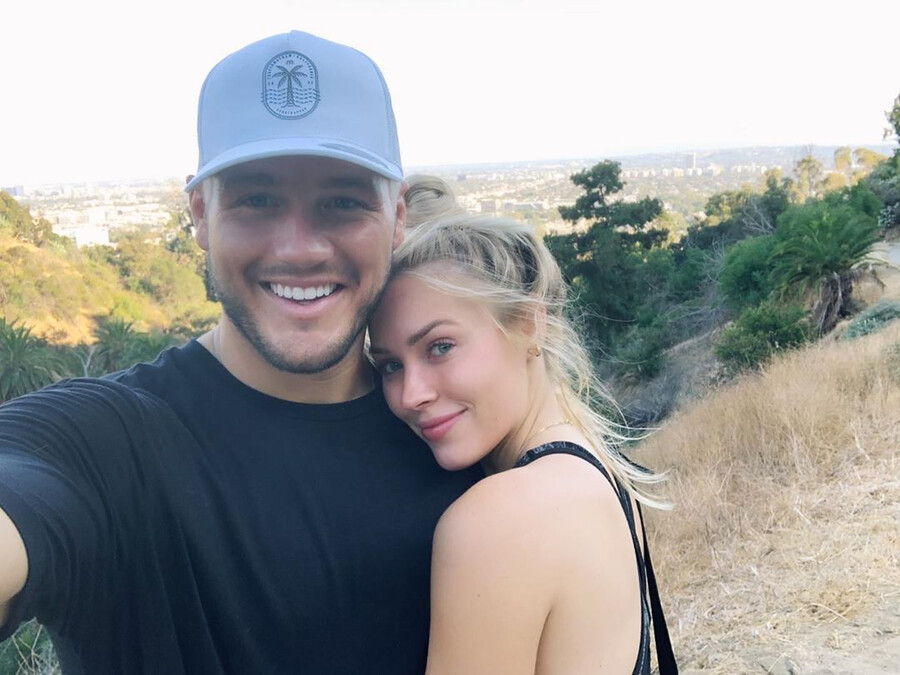 In one of the most popular teasers for Season 23 of The Bachelor, Colton Underwood is shown running away from producers and eventually jumping a fence. “This moment will go down in Bachelor history,” read a tweet from the official Bachelor Twitter account. For a show that’s always upping the dramatics and making viewers scramble to keep up with intense plotlines, dropping in complications like the lead jumping a fence is normal. In a quest for ratings, the franchise goes to the extreme: There’s straight up racism, a strange obsession with virginity and purity, and abuse being reframed as drama. Most recently, the franchise found itself in the headlines again, this time because Season 23 winner Cassie Randolph hit Underwood with a restraining order for allegedly stalking and harassing her.

In Bachelor speak, Underwood and Randolph’s relationship has been filled with ups and downs. The televised portion of their relationship served as both an example of what love shouldn’t look like and an example of how reality TV shows become more interested in manufacturing drama than protecting their female leads. Underwood’s season followed the same basic premise that all of the franchise is beholden to, so his relationships began heating up in the eighth week when he finally met his future bride’s family. When Randolph, who was a clear favorite, introduces Underwood to her parents, it quickly becomes clear that her family isn’t fond of their relationship or of Underwood himself. Randolph’s sister is worried because she doesn’t believe that Randolph is ready to tell Underwood that she loves him, which is an expectation at that point in the series.

Randolph’s dad doesn’t trust Underwood considering that he’s actively dating three other women while trying to convince Randolph’s family that she’s the only one he really wants. Everything implodes on the next episode, when Randolph tells Underwood that her dad won’t give his blessing for their relationship. Instead of sleeping with Underwood and professing her love for him, as the show norm, Randolph says she doesn’t want to get engaged and decides to leave the show. Underwood’s reaction is harsh: “Fuck all this,” Underwood says. He punches a camera (a moment proudly featured in the season teaser), storms off, and then jumps the fence. “He just jumped the fucking fence,” host Chris Harrison, ever the voice of reason, exclaims. “For the first five minutes [after he jumped the fence], I thought, ‘We’re clearly gonna find him. It’s not that big of a deal.’ And then we didn’t,” Harrison later told Entertainment Tonight.

We’re supposed to feel bad for Underwood in this moment, especially when he tells the remaining women that he’s heartbroken because he’s in love with Randolph and he’s now stuck all alone on a show that’s supposed to lead to true romance. As such, he’s able to see Randolph before she leaves the show, and in the season finale, Underwood begs Randolph for another chance. “I sacrificed and gave up everything,” he tells her. “In my opinion, that’s part of a relationship. Compromise, sacrifice, that’s all things that you do when you love somebody… I’m not telling you that I love you. I want to show you. I want you to see exactly why and how much I’m willing to give up and give to us.”

Underwood’s apology works exactly as he intended for it to. They’re able to go on a final date and Randolph ultimately wins the season. “You have to choose to love somebody, you have to choose to fight for anybody you’re in a relationship with,” Underwood told Entertainment Tonight. “I think that’s what love is, and that’s what being in a relationship is all about.” Various media outlets celebrated Underwood’s “fight” for love and his refusal to back down from the challenge of loving Randolph. But that’s just for television.

In May , Randolph announced on Instagram that she and Underwood had broken up. “Colton and I have broken up, but have decided to remain a part of each other’s lives,” she wrote. “With all that we have gone through, we have a special bond that will always be there.” Then, this month, news broke that she’d filed a restraining order against Underwood and on September 14, a judge granted her a temporary order with a hearing set to take place in October. There are many harrowing details in the case, including that Underwood harassed her friends and family, used fake phone numbers to contact her, and put a tracking device on her car.

In The Bachelor universe, men are encouraged to fight for love, and to never give up.

Randolph has since gone quiet online. She hasn’t posted on Instagram since September 3, but she’s already enduring shaming. “…I wouldn’t take Cassie’s word over Colton’s,” one Instagram user commented on her last post. “She’s shown she got into all of these for publicity. And now she’s exploiting the situation once more knowing people tend to side with women and many will just assume Underwood is the type of guy who does this. She’s a manipulative one.” A second user agreed, writing, “I don’t believe Colton did any of this and I really don’t think Cassie is as great as some of y’all think she is. She could have walked away a long time ago. Nobody FORCED her to be with him.”

Underwood has also stayed silent, but some of his Instagram followers are questioning his silence and demanding answers. Other followers are more sympathetic. One comment reads, “Just a dude who wants his girl back,” with a sad face. These polarizing responses to Randolph’s restraining order illustrates the excuses we make for abusive men in heterosexual relationships and underscores the insidious way that The Bachelor franchise markets and edits abusive behavior to make it seem loving. The show likes to twist and warp narratives to mask its own wrongdoings, like its vetting process allowing men who have pleaded guilty to assault to compete on the show, abuse allegations being levied against Bachelor creator Mike Fleiss, and sexual assault allegedly occuring on set. The franchise has shown little commitment to protecting its female contestants and it still doesn’t understand how important its portrayal of love is to its 12 million viewers.

In The Bachelor universe, men are encouraged to fight for women who want to be won. If the series hadn’t spent so long turning Randolph and Underwood’s relationship into an example of a man risking it all to prove his love for a woman, maybe it would be easier for viewers to see what’s right in front of them: Underwood couldn’t take no for an answer—and there are few things more terrifying than a partner who can’t handle rejection. In fact, there’s nothing loving about it at all.

Read this Next: The Pleasure Dome: Why Can’t I Give Up the “Bachelor/Bachelorette” Franchise?