For the Love of IndependenceRomance Authors Are Literature’s Unsung Heroines 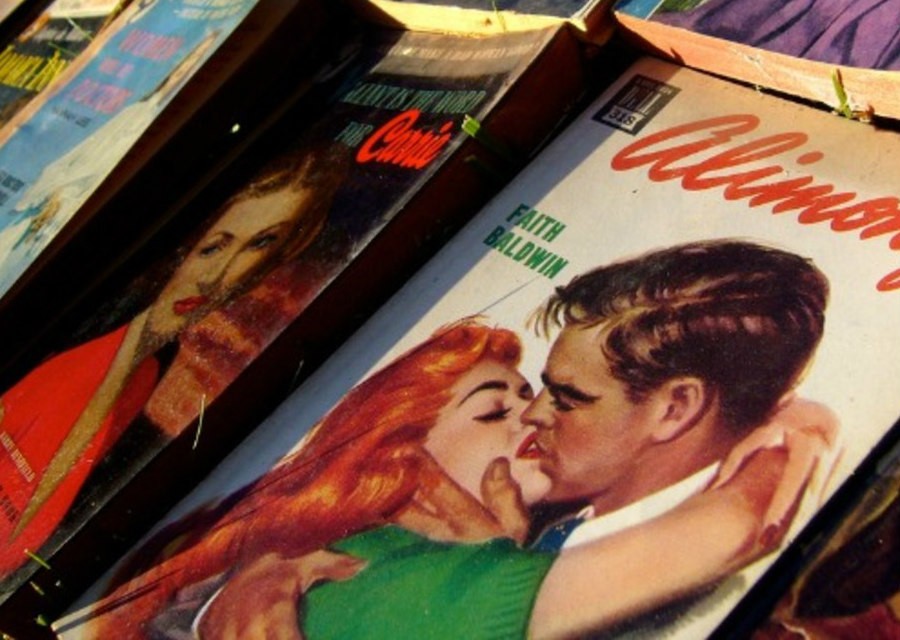 “Romance novelists are the unsung heroes and heroines of our industry,” says Tess Sharpe, with a steely voice. The adult and young adult author is used to hearing people cast aspersions on romance, but her love for and work in the genre has connected her with a very different version of romance than the one people mock. For Sharpe, romance can be an explicitly feminist genre with innovative authors taking on writing challenges—and business-related ones.

Romance is consistently a bestselling publishing category, and it hosts a range of subgenres, including historical, contemporaries, mysteries, thrillers, and suspense. Yet, “romance” often calls to mind 1970s bodice rippers: Lurid covers featuring women clutched firmly in the arms of men with dramatic hair and ruffly white shirts, and stories with sketchy boundaries and regressive storylines. Tania Modleski’s Loving With a Vengeance: Mass Produced Fantasies for Women, first published in 1984, explored how the male gaze, cultural beliefs about innocence, and rebellion factored into the genre. Though much of the text feels outdated now, it highlights how people thought about romance at the time. So does Janice A. Radway’s 1991 book, Reading the Romance: Women, Patriarchy, and Popular Literature, in which she claimed that “an intensely felt but insufficiently met need for emotional nurturance drives these women to repeated encounters with romance fiction.”

“People like to point to the ravishing, dubious consent present in the ‘70s romances as a reason the genre is anti-feminist, but my response is that if I stopped engaging with any type of media that was sexist in the ‘70s, I’m going to run out of books and movies really fast,” said Bree Bridges, one-half of the writing duo Kit Rocha. “It always strikes me as frustrating that other genres get to be evaluated individually, but the one dominated by women has to show perfect feminist content in every book or the entire genre is damned.” Bridges and her writing partner Donna Herren write steamy dystopian erotic romance that explores dominance and submission, and like Sharpe, they see feminism in the reading and writing of romance.

“It’s an industry largely comprised of women, largely centered around women, and largely marketed to women. Frankly, I’d be surprised if our society didn’t deride us all,” comments Herren. Many of the women writing and reading romance are voracious, whip-smart readers who are having 301 conversations about issues like consent, gender parity, and what they want from their relationships. “Picking apart power dynamics is our day job, and watching the media stumble through the weeds in Consent 101 is painful,” adds Bridges.

Romance is a genre that allows women to explicitly center and explore their own pleasure. “Many modern romance writers zero in on the sexual lies women have been told, reversing patriarchal constraints and confirming what women already knew about their sexual identities but that many distrusted because it conflicted with the conventional wisdom that detailed what being a good woman was all about,” wrote feminist, academic, and romance writer Jenny Cruisie. “If romance novels do nothing else, they should earn the respect of feminists for the way they re-vision women’s sexuality, making her a partner in her own satisfaction instead of an object.” Empowered sexuality isn’t limited to heterosexual romance; there’s also a lively and growing subgenre of LGBTQ romance novels.

In an editorial for the New York Times, contributing op-ed writer Jennifer Weiner wrote that we need bodice-ripper sex education because romance novels “taught readers that sexual pleasure was something women could not just hope for but insist upon.” Feminist romance offers models of consent and conversations about sex and sexuality rarely seen elsewhere, alongside critical analysis of sexual power structures, as seen in Rocha’s books or the classic dance between rogue and heroine in Georgette Heyer’s body of work. English professor Val Derbyshire notes that romance explores issues like rape and victim blaming, telling The Guardian romance is a “literature of protest.” 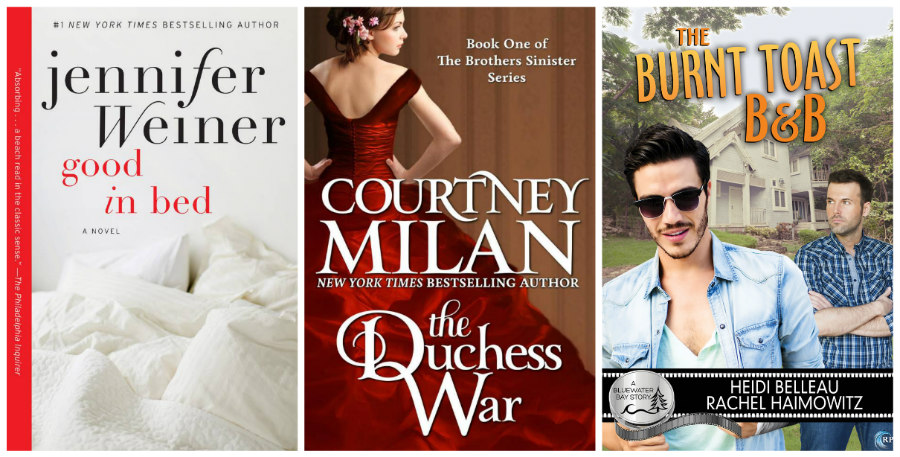 Yet, romance is derided because of its predictability: When you pick up a romance, you expect the main character to end up in a relationship by the end of the book. That may sound simplistic, but it’s actually hugely difficult, says Sharpe, who notes that she’s constantly faced with challenges as she mixes up, and sometimes flips, tropes to keep readers engrossed in her work. Especially since her fans read all of her work, and she can’t pull the same trick twice. That predictability can make romance feel safe and comfortable, but these aren’t bad feelings, especially when romance can provide happy endings for communities that don’t always get them.

Jasmine Guillory, author of The Wedding Date, upended many expectations about the genre, and like her colleagues, she comes from a background that doesn’t necessarily scream “romance” in the way detractors think about it: She went to law school. That puts her in company with Courtney Milan, another woman of color in romance who’s also a law school graduate, uses her background regularly in her work, and was recently part of the group of women who came forward about sexual harassment at the hands of Judge Alex Kozinski. The diversity in identity and background for romance authors contributes to the representation of a broad spectrum of lived experiences in romance novels. It also puts paid to the stereotype that romance authors are white ladies in frilly parlors writing steamy books with no connection to the real world.

Romance is often deeply grounded in smart, talented, powerful women doing amazing things—and getting the guy(s) and/or girl(s), too. Left unspoken in derisive comments about romance’s predictability is the fact that all genres are predictable, filled with their own tropes and formulas. Within romance, these limitations foster incredible creativity and flexibility—something Sharpe says her editors actively encourage, as when she adds characters who explicitly identify as feminist, or includes plots where her heroines do all the rescuing and the love interests show up later. Limitations force her to write more fully realized, rich characters, and to be meticulous about plotting—she says her work has expanded and refined her abilities as a writer. But the feminism in romance isn’t just in the storytelling. 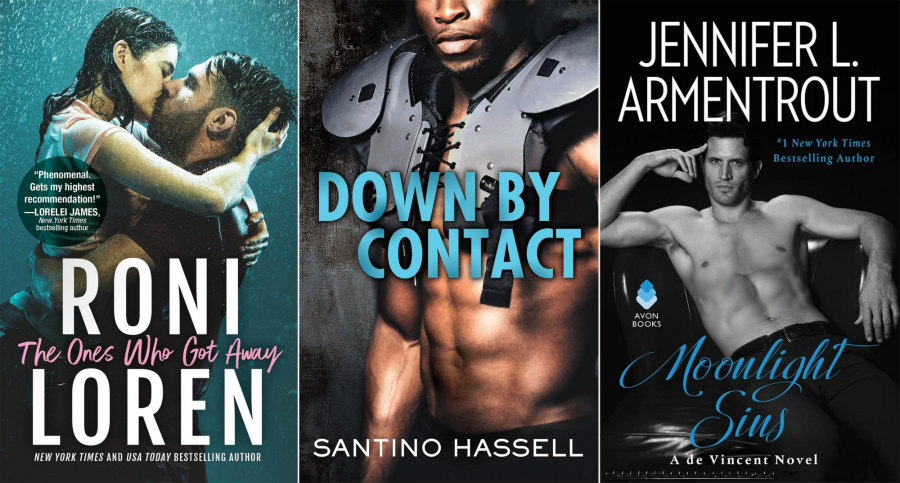 The Ones We Got Away With by Roni Loren, Down by Contact by Santino Hassell, and Moonlight Sins by Jennifer L. Armentrout (Photo credit: Sourcebooks Inc, Penguin, and HarperCollins)

Authors like Sharpe (under a pseudonym) and Kit Rocha are remarkable because they’re leveraging self-publishing. Self-publishing is a heavily maligned path—“I’ll be the first to admit that throwing open the gates means a lot of crap can get through,” says Bridges. “But self-publishing has also been an outlet for marginalized voices who have been ignored by mainstream publishing for decades.” As in other avenues of publishing, authors from underrepresented groups can struggle to break in at mainstream publishers. Self-publishing shouldn’t be the solution to this exclusion, but it can be a valuable stopgap.

Some authors, like Sharpe, publish both traditionally and non-traditionally, seeing strengths and weaknesses to both paths. While self-publishing is sometimes sneered at, it’s a lot of work. “There are two of us, and it’s still overwhelming sometimes,” says Herren. Sharpe taught herself marketing when she launched her self-published pseudonym, and noted that the indie community was incredibly supportive, and much more informative, than traditional publishing. Sharpe’s able to pay the bills with her work while other self-published authors are making hefty annual salaries. “They’re amazing business women,” she comments, and they have to be. She’s a one-woman marketing and publicity team who’s also doing the writing, editing, formatting for publication, and logistics on all of her books, in addition to managing a newsletter. Managing her own business also helps her better negotiate with her publisher for her traditionally published books.

Women working for themselves while changing the culture of romance is an explicitly feminist activity for Sharpe—and a number of her colleagues. For those interested in delving into romance, Milan and Guillory are both good places to start, but so are Alyssa Cole, Tessa Dare, Beverly Jenkins, Alisha Rai, Victoria Dahl, Rebekah Weatherspoon, and Sarah MacLean. Pick up a romance or two: You might be surprised, and find yourself eagerly devouring someone’s back catalogue. 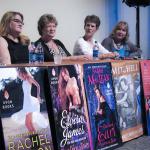