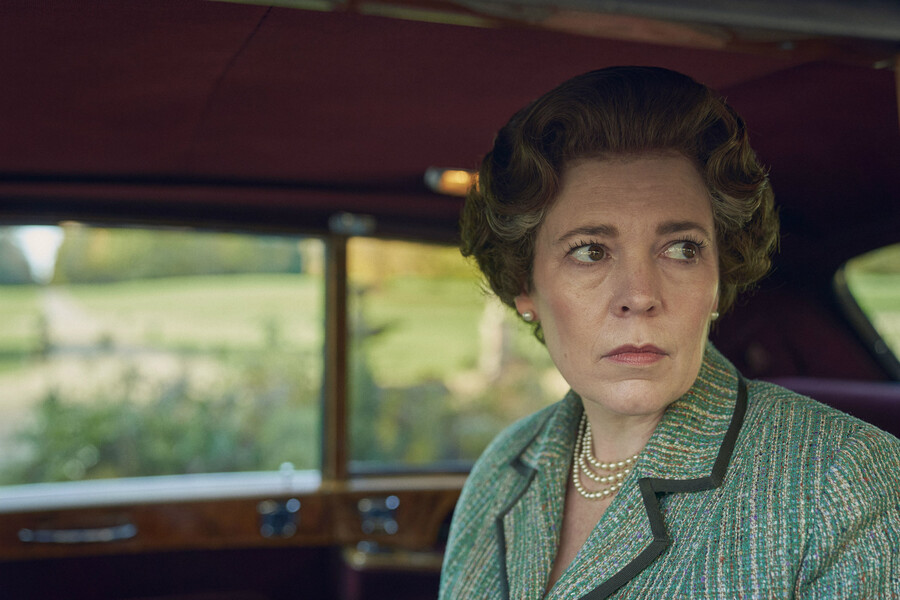 The eighth episode in Season 4 of The Crown opens with a strange montage of images: A young Margaret Thatcher (Eva Feiler) and Princess Elizabeth (Claire Foy), who is soon to be queen, prep for the future, while people in other parts of the world—presumably Great Britain’s colonies—placidly go about their lives as housewives, fisherfolk, and traders as they listen attentively to Elizabeth’s speech delivered on the occasion of her 21st birthday. In this speech, addressed to the people of the so-called “commonwealth,” Elizabeth reminds her listeners of “the great privilege of belonging” to the hallowed group of nations—that there are “homes ready to welcome us in every continent of the Earth.” Speaking as the “representative” of her generation, she waxes eloquent about the “anxieties and hardships that the [second world] war has left behind for every nation of our commonwealth,” putting them down as the “price we cheerfully undertook to pay…in defense of the liberty of the world.”

Even a superficial understanding of the commonwealth’s origin—as a “vessel of former [British] colonies with the former imperial master at its helm” that perpetuates the racialized and extractive logics of colonialism through immigration laws, corporate capture of resources, and denial of slavery reparations—is enough for viewers to recognize the problematic politics of this speech. The common identifier “we” also collapses the starkly divergent experiences of the war—the colonizer who waged it and the colonized who became its raw material. Though Elizabeth’s speech in The Crown is a faithful reproduction of the original, it’s difficult to digest how the commonwealth outside of Britain is visualized in the montage.

As someone born and raised in a former British colony, one image from this montage left me particularly baffled. In it, Gandhi rests with a passive expression on his face as women surround him and stare vacantly into the camera. Now consider that Elizabeth’s speech was delivered on April 21, 1947, barely four months before undivided India and Pakistan—at the time Britain’s biggest colony—would formally declare freedom from two centuries of violent occupation. It was a moment in history that found the country caught between the euphoric anticipation of independence and the unfolding horrors of a protracted and bloody partition. Given his role in India’s freedom movement, The Crown’s showing of Gandhi’s inexplicable passivity at that moment in history is at best a curious flaw and at worst a willful erasure. In fact, there was a wave of decolonial struggles in countries across Africa, Asia, and the Middle East from the mid-1940s to the 1960s. Most of these countries would later become part of the commonwealth. Had the makers of The Crown accounted for these critical encounters, this montage would’ve been vastly less idyllic.

It is disturbing to see how colonial histories that left violent legacies across the world and triggered intergenerational trauma in their wake are depicted in this biopic about the private life and palace intrigues of Queen Elizabeth II. Throughout the series, references to British colonialism abound but are incidental to its plot, serving as props that stitch together the Queen’s public and private traumas. They dart in and out with little context and a blatant disregard for any point of view that is not British, reaffirming a whitewashed history shorn of the brutalities that the formerly colonized know only too well. Together, they give us enough clues about how Britain cares to recall its colonial atrocities and accounts for their lasting impacts on postcolonial societies.

Take, for instance, the pilot episode, which features a 10-second clip wedged between scenes of Elizabeth and Philip’s (Matt Smith) royal wedding in which Winston Churchill scoffs that Louis Mountbatten is “the man who gave away India.” Churchill’s quip appears without context and goes uncontested, vocalizing a uniquely British take on colonial history. He repeats Britain’s “tenacious mythology”, to use the words of academic and author Priyamvada Gopal, that freedom “was a British ‘gift’ to the colonies along with the railways and the English language,” not “wrested” by the colonized but benevolently “conceded” by the colonizer. In one stroke, Churchill’s statement dismisses a hundred years of anticolonial struggles in India, the loss of countless lives, and the communal and ethnic strife that were handed down to the subcontinent as one of colonialism’s many legacies.

The potshot at Mountbatten could have introduced us to Churchill the unapologetic imperialist. For the rest of the series though, Britain’s much-lauded prime minister is humanized as a benevolent if sometimes manipulative patriarch—paternal toward the young Queen—and a cunning and astute politician. This is not quite the Churchill the colonized world was forced to reckon with. The Churchill, for instance, who referred to the people of India as “a beastly people with a beastly religion” or willfully exacerbated the effects of the 1943 Bengal famine that killed up to 3 million people, is nowhere to be found. There’s no mention of his British wartime cabinet diverting food from starving Indians to well-supplied British soldiers during WWII; exporting surplus grains from the rest of India to Ceylon; sending Australian wheat sailing past the port of Calcutta (where the bodies of those who had died of starvation dotted the streets) to storage depots in the Mediterranean and the Balkans to create stockpiles that could ease the pressure on post-war Britain; and turning down offers of U.S. and Canadian food aid. Instead we get a Churchill minus any real context.

As the series progresses, it confirms again and again that its colonial references are segues to telling already widely popular stories about British royalty and politics. The 1956 anticolonial uprising in Egypt led by Gamal Abdel Nasser that resulted in the nationalization of the Suez Canal is given frustratingly short shrift. Churchill uses the Egyptian unrest to divert attention from the 1952 London smog. Elsewhere, it becomes the prop through which the disastrous term of Churchill’s successor Anthony Eden unfolds. When Eden admits that he colluded with France and the new settler colony Israel to invade Egypt and reclaim control over the Suez Canal without authorization from the Parliament or the United Nations, this naked power grab receives less attention than Elizabeth’s preoccupation with Philip’s alleged extramarital affairs and Margaret’s doomed relationship with Peter Townsend (Ben Miles). The scattered narrative leaves little room to reflect on the momentous occasion when the Egyptians, led by Nasser, asserted their freedom and laid claim to sovereignty of their homeland.

When stories of the colonies are not sandwiched between royal affairs and domestic politics, they appear as royal vacation spots. Worse, there’s not even the slightest sense of irony. The episode on Prince Philip’s 1956 Olympics tour is replete with the exoticization of colonized people and sexualized fantasies of colonized women. Allusions to colonized subjects as “primitives” and “savages” abound throughout the series. During her tour of Rhodesia (Zimbabwe), Princess Margaret (Vanessa Kirby) describes the settler colony as “a tiny white community surrounded by primitive Africans.” During a tour of Kenya, Elizabeth comments on the remarkable transformation of Nairobi from “a savage place” less than 50 years ago. The implication is clear: Nairobi has been saved and reformed by the colonial civilizing mission. Later, in a scene that it is difficult to watch, a disgustingly racist Philip—a remarkable study in parochial white ignorance both onscreen and off—has a jolly good time inspecting the “hats” of the Indigenous leaders gathered to welcome the royal couple. Like the BBC, which once tried to pass off Philip’s many astonishingly racist utterances as harmless and frivolous “gaffes,” The Crown makes an embarrassingly transparent attempt to whitewash the rank racist Philip as a good-natured, if indiscrete, chap who is merely chided by his wife for his “indiscretions.”

In its casual colonial references, The Crown has neglected the defining and lasting trauma of postcolonial generations.

This pandering to the colonial gaze in a post-Brexit Britain—itself an outcome of “nostalgia for Empire” and “white entitlement to the spoils of colonialism”—is hardly a surprise. Critical legal and race theorists like Nadine El-Enany have argued that the Brexit referendum was a reflection of Britain’s amnesia around empire, evident in pro-Brexit assertions that Britain had no reason to apologize for its colonial past. The Crown’s colonial references couched in a warm nostalgia for the monarchy feed precisely this amnesia while humanizing an extractive institution that should rightfully be consigned to the past. It’s likely that all of this will be explained away as the “realities” of that era or under the pretext that The Crown is the story of the young Queen coming into her own. But the story of the British crown is inextricable from the story of brutal atrocities committed in its name: the wealth of nations sucked dry, communities torn apart, and the intergenerational trauma left in their wake.

These are the stories the series has chosen to ignore. Pop culture narratives are more than entertainment; they have archival significance, capture the pulse of prevailing public sentiment and politics, and determine how certain moments in history are (or will be) remembered. In its casual colonial references, The Crown has neglected the defining and lasting trauma of postcolonial generations. Instead, it has unabashedly and unequivocally channeled the imperial gaze and rhetoric, regurgitating well-worn racist narratives, whitewashing colonial atrocities, humanizing empire apologists, and undermining anticolonial struggles. No matter how many potshots the series takes at the “royal family” through the portrayal of Princess Diana or a somewhat out-of-touch Queen, The Crown has firmly placed itself as yet another vehicle of Britain’s colonial amnesia, blissfully neglectful of the collective traumas of postcolonial nations.

Read this Next: The Post-Colonial Politics of “Game of Thrones” 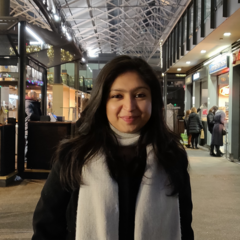 Sohel Sarkar is a independent journalist and editor, and a feminist researcher-writer. She writes about gender and sexuality, food, migration, and popular culture. Her work has been published in Color Bloq, Himal Southasian, Whetstone Magazine, Protean Magazine, and Wear Your Voice, among others. Find her on Twitter @SohelS28 and on Instagram at @sarkar.sohel10.