Watch the CrownWhat's Next for the Natural Hair Movement 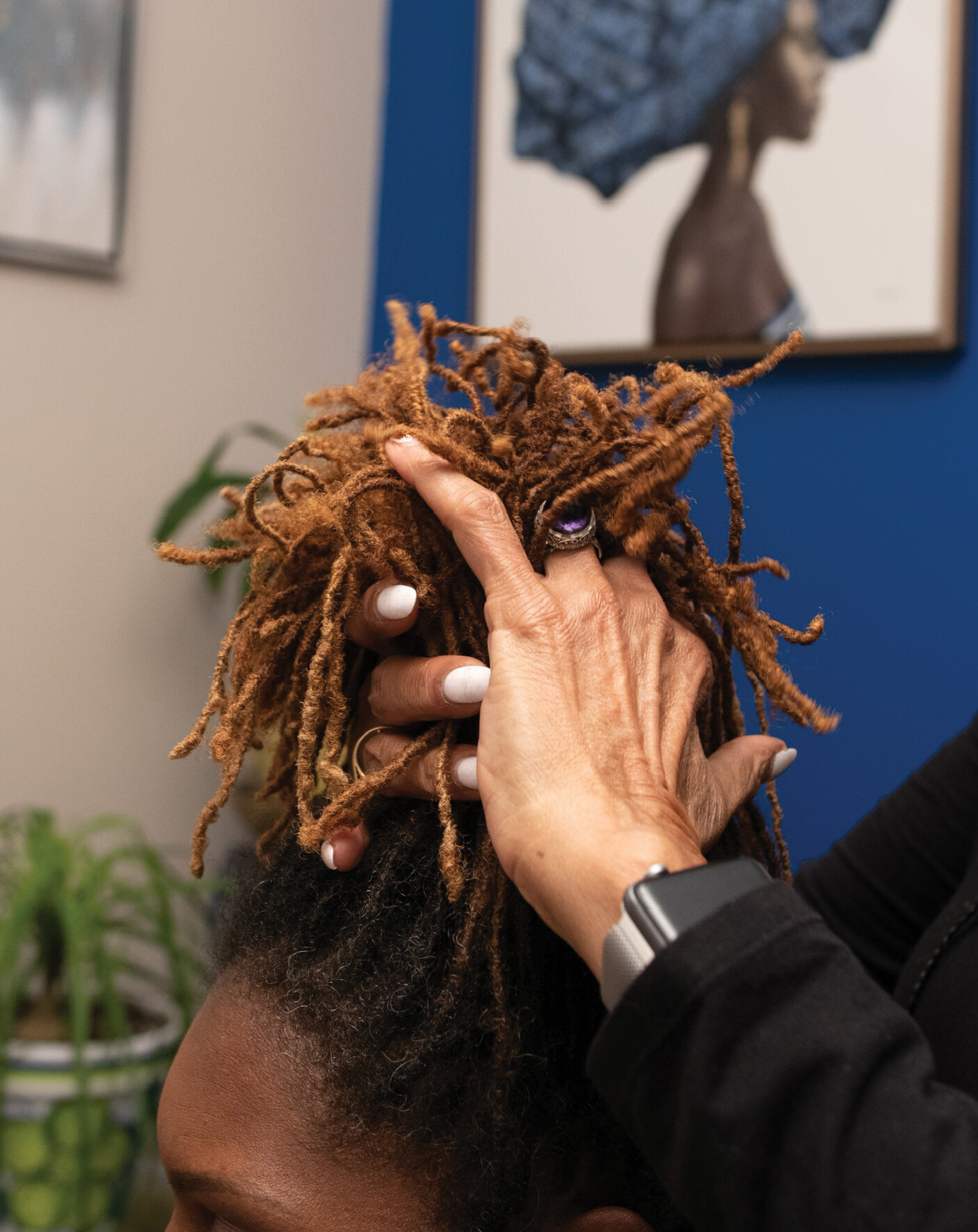 Sarone SunRaa styling a client’s hair in her salon

The last time I enjoyed myself at a movie theater was in February 2018 when I braved the cold to see Black Panther. The film—written by, directed by, and starring Black people—meant that we had decided how to portray ourselves. What struck me most was the range of Afrocentric hairstyles: Nakia’s “Wakanda knots” (similar to Bantu knots), Shuri’s intricate braids, T’Challa’s Afro, Killmonger’s sideswept locks. In one scene, Okoye snatches off her wig and throws it at her white assailant, an act of rebellion not only against this attacker but against the Eurocentric beauty standards that have attacked our culture for centuries.

Seeing natural hair exalted in pop culture is precious. In the past two decades, the natural hair movement has blossomed, from YouTube tutorials to children’s books. But loving and affirming Black hair—and, by extension, Blackness—remains rare, controversial even, to some. It’s why legislation like the CROWN Act, which protects against anti–Black hair discrimination, has yet to pass federally. And it’s part of why I recently decided to publish my photojournalism book, My Beautiful Black Hair: 101 Natural Hair Stories from the Sisterhood, to amplify Black women who embrace their hair. Though the national conversation on natural hair has progressed significantly, it’s been slow to arrive onscreen, with a few notable exceptions—and it wasn’t inevitable that we’d even get this far.

Like most conversations about hair, this one starts at the salon. There’s a growing community of hairstylists nationwide who promote natural hair and educate others about their own hair journeys. One such leader is New Orleans native Sarone SunRaa, a practitioner of Black wellness who exudes a quiet confidence. She’s been running a natural hair salon in the Tremé district for 34 years. The walls of her salon feature photos of Black hair icons Roberta Flack, Cicely Tyson, and Miriam Makeba. Like the mythic Sankofa bird, which bends its beak backward to retrieve an egg from its back, SunRaa illuminates that knowing our history allows us to know where we’re going. That goes for our hair, too.

“When I study the hairstyles in [precolonial] Africa, I see that they were an expression of their identities,” says SunRaa. Hairstyles signified family background, marital status, spirituality, and tribe. Unfortunately, much of this ancestral knowledge was lost during slavery. Enslaved Africans had no time for the intricate, sometimes days-long hair-care rituals they’d been practicing for thousands of years. “We had nothing,” says SunRaa. “We didn’t have anything to ‘fix’ our hair.”

Black hair was demonized. It wasn’t until the civil rights movement that natural hair became fashionable, thanks in part to the Black Panthers. “People who were waking up and becoming conscious started wearing Afros,” says SunRaa. Elise Bryant, who runs D.C.’s Labor Heritage Foundation, echoed this sentiment during our interview for My Beautiful Black Hair. When she started college in 1969, Bryant felt that “to stop straightening one’s hair was an act of liberation…. I was both Black and female, and both parts of me had to be liberated…both psychologically and spiritually.”

This iteration of the natural hair movement was reflected only at the margins. Soul!, one of the first nationally televised shows created by and for African Americans, featured such giants as Nikki Giovanni, Toni Morrison, and James Baldwin. It was a lesson in the decolonized Afro. The show, like the natural hair movement it amplified, lasted only a few years. Perms quickly returned.

SunRaa saw the damage firsthand. In 1984, she traveled from her home in Seattle to Atlanta to attend the famous Bronner Bros. Beauty Show, which has now run annually for nearly 75 years. (Chris Rock describes it in his 2009 documentary Good Hair as the place where Black people collectively decide “what good hair is.”) But SunRaa was shocked to see her people suffering from perms. “They were on fire. Stylists had to rush clients up to their hotel rooms to rinse the perm out of their hair.” The chemicals wreaked irreparable damage. Still, SunRaa and her then husband had a successful morning presenting a natural hair comb. When the pair returned from their lunch break, however, they found their stage had been broken down. “The organizers told us, ‘No, this is not what we do here. We’re not talking about natural hair.’” She remembers feeling “petrified, so scared people were gonna come after me” for encouraging Black people to love their crowns.

SunRaa realized she needed to return to her hometown of New Orleans, where she’d spent her childhood caring for her neighbors’ hair. Though she believes her life’s purpose is to “teach our people who they are through their hair,” she was still wary of a hostile backlash. In 1988, she opened up a small, unadvertised salon to practice healing hair services, the first of its kind in Louisiana, she tells me. “I take the struggle out and help us to embrace our natural hair,” she says, ensuring that her clients gain a deeper understanding of their hair’s history and the tools to care for their hair properly.

When asked about seeing natural hair in TV and film today, SunRaa doesn’t skip a beat: She notes that Annalise Keating (Viola Davis) removing her wig onscreen in How to Get Away with Murder stands as a metaphor for the increasing representation of natural hair in mainstream media—and Black people’s role in carving out our own natural hair revolutions. “It warmed my heart. I was like, finally. Finally,” says SunRaa. It was actually Davis’s idea: “I thought it would be very powerful,” she told the Wall Street Journal. “It’s part of her mask.” This stands in contrast to another Shonda Rhimes show, Scandal. Kerry Washington’s Olivia Pope rocks natural hair occasionally, mostly when she’s away from her white male–dominated work environment.

Loving and affirming Black hair—and, by extension, Blackness—remains rare, controversial even, to some.

While these characters illustrate complicated relationships with their hair, recent series such as Insecure, black-ish, and On My Block star Black leads whose natural hair needs no commentary: Issa Rae’s Afro updos, Tracee Ellis Ross’s carefree curls, and Sierra Capri’s full coils simply exist. Although storylines revolving around hair (as in the 2018 film Nappily Ever After) felt important a few years ago, today’s movies and shows can offer us natural hair, well, naturally; we just need more of them.

Will that happen? Behind the scenes, the industry hasn’t exactly prioritized Black hair care, natural or not. Black actors have been vocal about their struggles with Hollywood hairstylists who were clueless about Black hair care and who messed up or even damaged their hair. Celebrities such as Rae, Taraji P. Henson, and Gabrielle Union now have their own natural hair-care product lines, just one solution to a communal frustration. Yet, the deeply ingrained stigma persists, even in Black-led films like Straight Outta Compton, where the casting call ranked women on a hierarchical scale that replicated the same outdated, white-supremacist beauty standards: “A” and “B” girls had long, natural hair (“no extensions”),“C” girls had weaves, and “D” girls were “African American girls. Poor, not in good shape. Medium to dark skin tone.” While there was no mention of short, kinky hair specifically, we can guess that they might have belonged to the latter category.

Back in New Orleans, SunRaa remains sunnily optimistic. “Every day, it’s better, better, better,” she says. Many shows today offer more honest and authentic depictions of Black identity and Black womanhood. They refuse to conform to the white gaze. Most importantly, they offer us the understanding that, if a world once existed where Black people loved their hair, such a world can exist again.

Read this Next: Loud and Clear 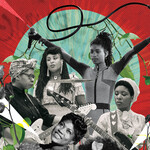 by Vanessa Willoughby
The origins of rock ’n’ roll are whitewashed. Too often, white men are credited as the creators and innovators, overshadowing Black artists who birthed the genre and shaped its progression. 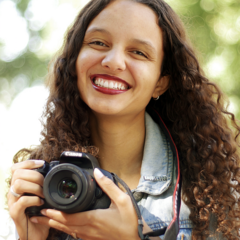