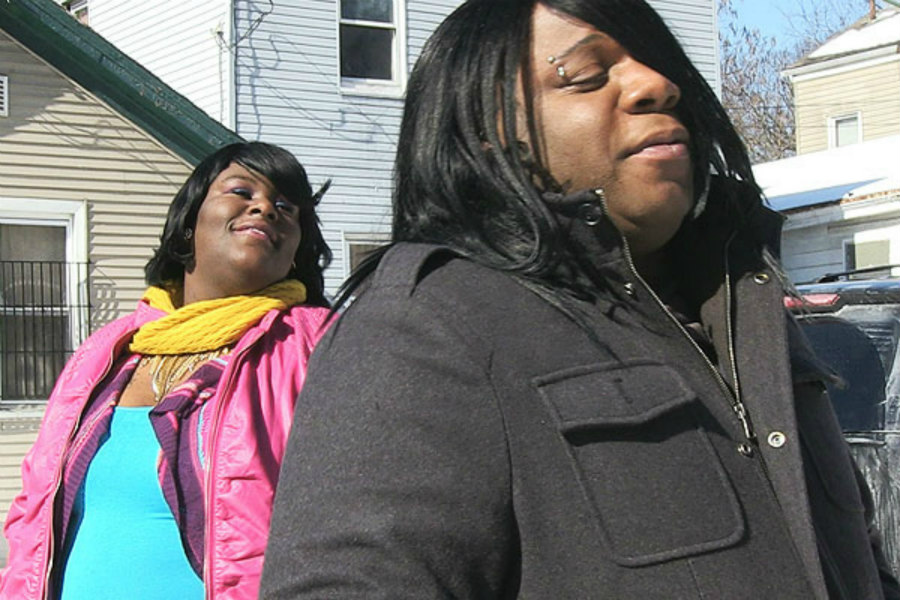 There’s a lot wrong with Catfish, MTV’s long-running reality show about deceitful people in online relationships. For starters, the show requires cohosts Nev Schulman and Max Joseph, as well as the episode’s subject, to confront the dishonest “catfish” with often catastrophic and traumatic results. There’s also the fact that so many of those who are pretending to be other people online have internalized hurt, particularly around fatphobia and colorism, and the show doesn’t provide an outlet for them to get the help that they need. Combine that with Nev tweeting that “#BlackGirlsRock… [but] they also tend to #catfish a lot. Just sayin,” and it’s clear that Catfish has far more problems than MTV intended it to when they turned their eponymous documentary into a docuseries in 2012.

Despite these glaring issues, Catfish is wildly entertaining. After seven seasons of sameness, the series still trends on Twitter every Wednesday night and reaches a devoted base of viewers because its formula is foolproof. Each week, a person contacts Nev and Max because they believe that either themselves or someone they love is being deceived by someone they’ve met online. Then, the cohosts unravel the person’s lies through Google image searches and phone-number lookups, before finally traveling to meet the “catfish” and confront them. Some episodes are a bust, but these seven have entered the reality-television hall of fame because they have catchy one-liners, outrageous antics, and everything that makes 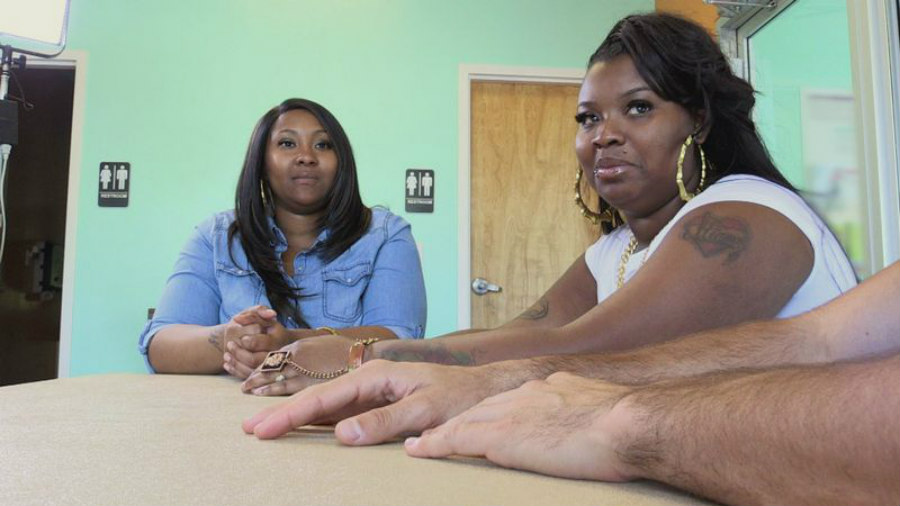 From left to right: Aisha and Tiana on MTV’s Catfish (Photo credit: MTV)

Tiana met James on Myspace, so that was already a disaster waiting to happen. After “dating” for three years without ever meeting, Tiana uproots her life and moves to North Carolina—the same state where her online lover lives. After some sleuthing, Nev and Max discover that James is really Trez, a 50-year-old car mechanic who isn’t as childless as he purported himself to be. In fact, Trez has a child with Aisha, one of Tiana’s close friends. Aisha is the real hero in this episode: She cusses Trez out for hiding their child from his digital girlfriend and ends her friendship with Tiana (though it’s really the man’s fault in this scenario). Nev and Max definitely stirred up the drama with this one. 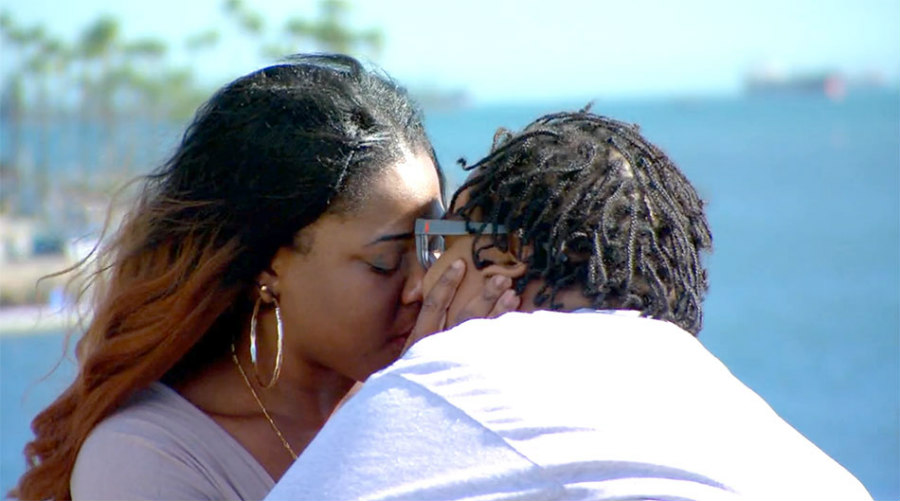 Every once in a while, Nev and Max get tricked by those they’re trying to help. Whitney, in this instance, is the catfish, though she tells the cohosts that she doesn’t like being lied to. The 27-year-old fast-food worker has fallen in love with Bre, a woman who lives in California, but she can’t afford to travel from New York to the West Coast to visit her. So, they concoct a plan: Whitney will appear on Catfish, convince Nev and Max that she’s being deceived, and have the show pay for them to finally meet in person after talking online for four years. When Nev and Max catch them in the lie, Whitney confesses to everything, and the show still sends her to California to meet Bre. Whitney is Catfish’s version of Joanne the Scammer—and she got away with it.

There are no love triangles as entertaining as those on Catfish. Dejay and Malik have both been in on-again, off-again relationships with Josiah, an elusive catfish living in Philadelphia. Dejay has been dating Josiah for seven years, though they’ve never met and Josiah has already lied about his appearance. When Nev and Max also receive a letter from Malik about Josiah, they realize that both men are being catfished by him and should confront him together. Josiah ends up being who he says he is, but comes to meet his boyfriends with guns blazing. This interview is full of classic one-liners (including “This boy got more issues than Vogue”) and dramatic screaming scenes, perfect aspects of reality television.

This episode will never get old. Keyonnah fell in love with Bow Wow—a.k.a. Shad Moss a.k.a. “I have a jet, and y’all broke negroes don’t, but it’s really not my jet, and now I’m embarrassed”—after she messaged him through a Facebook fan page.

While Keyonnah was skeptical about her online lover actually being Bow Wow, she became 60-percent convinced when he sent her $10,000 through his assistant Larry Brown. Suffice it to say, Bow Wow doesn’t have an assistant named Larry Brown, and Keyonnah’s catfish wasn’t the famous rapper. When Max, Nev, and Keyonnah drive 10 hours to Atlanta to meet “Bow Wow,” they discover that it’s really Dee Pimpin’, a third-rate rapper who hoarded loan money from her relatives to send the large sum to her online boo. Dee Pimpin’ is hilarious because she’s not apologetic about catfishing Keyonnah. After all, we’ve all done crazy things for love, right?

The best part of this entire saga is that the real Bow Wow invited Dee Pimpin’ and Keyonnah on 106 & Park—and finally fulfilled Keyonnah’s childhood dreams of meeting him. 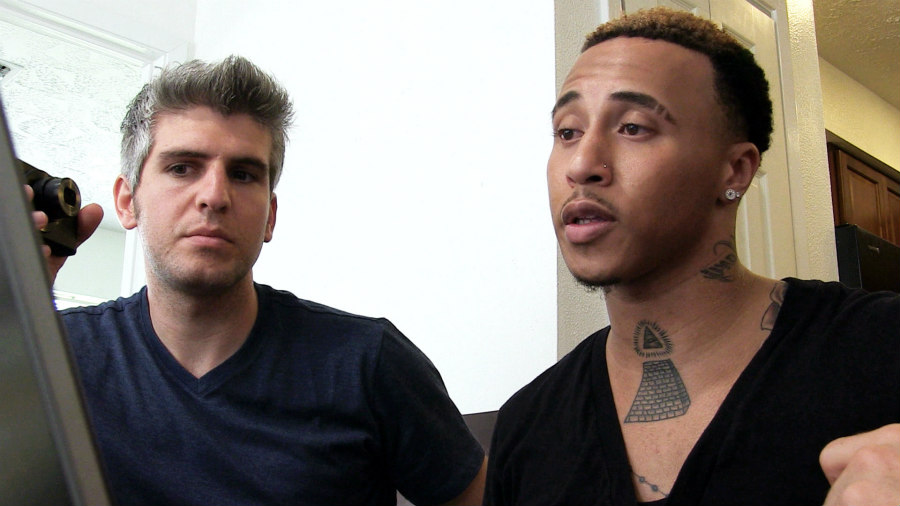 Catfish has spawned many legendary one-liners, but there are three words that are particularly iconic: “Dis tew much.” That phrase has been displayed across other videos, like Mo’Nique crying and vigorously shaking her head in Precious, but it became popular after Anthony, a 27-year-old retired soldier who earned a Purple Heart, learned that he was being catfished by Framel a.k.a. Marq. Anthony became suspicious after Marq stood him up when he traveled to Jackson, Mississippi, to meet him.

Of course, Marq had the perfect excuse: He’d had his car stolen, and Uber, Lyft, and public transportation weren’t an option, so he couldn’t go to the restaurant where they planned to meet. Nev and Max quickly discover that Marq doesn’t exist and is really a cover for Framel. When they confront Framel for lying, it quickly escalates with Anthony threatening to beat his ass. What a mess. I couldn’t stop watching if I tried.

While most Catfish episodes focus on romantic couples, Lucille and Kidd Cole were the first guests who were entangled in a financial scam. Kidd Cole, an alleged record producer signed to Kanye West’s GOOD Music label, befriended Lucille, a fan based in Washington, D.C., to help him coordinate a trip there. She paid for hotel rooms, transportation, and private security with the promise that Kidd Cole’s manager, Miguel, would reimburse all of the expenses. As soon as Kidd Cole left D.C., his “manager” disappeared and left Lucille with bills that she was unable to cover. In the course of their investigation, Max and Nev discovered that Kidd Cole had scammed multiple people, including Loretta, an independent limousine driver who also arranged transportation for him.

He was also under investigation for scamming other people. When Lucille, Nev, and Max confront Kidd Cole, he acts very nonchalant, leading Nev to grab his phone and toss it into a river. After the Catfish producers promise him a new phone, Kidd Cole agrees to arrange a studio session in order to prove he’s a producer. That’s a bust, too. Inevitably, Kidd Cole confesses that he’s been homeless and lies to cover up his lack of confidence, but after the episode ends, it becomes clear that Kidd Cole hasn’t learned anything. Apparently, he produced Beyoncé’s “Drunk In Love” and was later sentenced to 21 months in prison for making false terroristic threats. Where do the lies end? Where does the truth begin?

There will never be a greater moment on Catfish than the “you should’ve never called me a fat-ass Kelly Price” line. Being fat-shamed was Carmen’s motivation for catfishing her cousin Antwane for more than three years. Carmen wrote to Nev and Max stating that she was worried about her cousin being deceived by a guy named Tony. She sent Nev, Max, and Antwane on a wild goose chase before finally confessing—in a perfect villain monologue—that they were never going to find Tony because she was Tony. It was literal perfection that can never be replicated.

Relevant: Behind the Curtain: Defining Horror in "Catfish"

[Warning: MASSIVE SPOILERS for the movie Catfish FOLLOW. It will be much less fun to watch if you have read the spoilers....