Sticky FingersWhat Have We Learned from a Decade of Sexting? 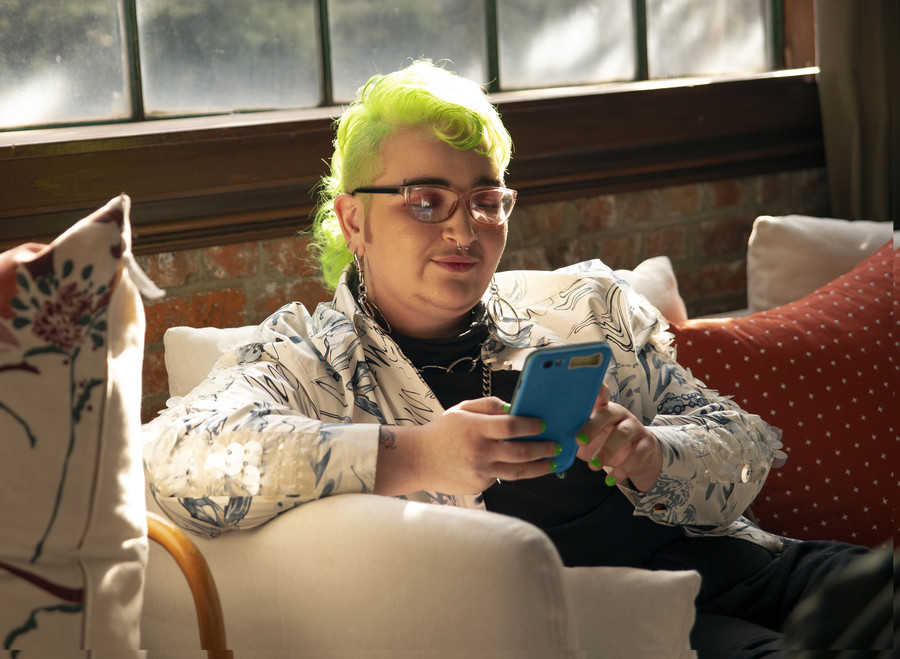 A genderqueer person looking at their phone (Photo credit: The Gender Spectrum Collection)

I got a Facebook account at the age of 12, at the very beginning of the decade. I had recently spent a month in Egypt, and had no other way to keep in touch with the friends I made. They lived in Egypt, Guatemala, Spain. “You need the Facebook!” they had all told me, and when I arrived back home I asked my mom if I could get “the Facebook,” so I wouldn’t lose them. Initially, she said no, with an explanation I imagine to have been something like “You’re too young,” or, “It’s not safe for young girls.” When I eventually got the green light to sign up for my first taste of what we now call social media, I lied that I was born in 1989.

“The Facebook” turned out to be relatively safe for me in 2009. My middle-school friend group developed our own social order and language built on likes and groups and fan pages. We tagged one another in statuses and made our crushes jealous by leaving them out. We friended people we’d never met because our friends liked them, and we posted entire photo albums on our walls for people we barely knew to consume. We stood by for the responses of “ugh gorgissss” and the “omg im dying ur so hawt.” It seemed harmless. There weren’t any rules yet; we were making them.

Kids with phones were a newborn phenomenon, and institutions were scrambling to figure out how to control them. My middle school’s administration held a town hall about cyberbullying and internet safety. My mom told me not to talk to anyone online who I didn’t know, and that everything online is permanent. I knew not to meet up with anyone, ever. My friends and I watched Catfish, the 2010 reality-TV show which followed couples who had met online but had never met, and we laughed. We knew people could get hurt online if they were reckless enough, or unlucky enough. Nothing felt too consequential then.

The past decade was rich in sexts, and richer in its confusion and deliberation about what to do about them. In 2011, New York Democratic Congressman Anthony Weiner resigned from his position after he was caught engaging in sexting with various women. This was the first time I had heard of sexting. It sounded bad, if my congressperson could be removed from his position for committing such an act. “What They’re Saying About Sexing” read the 2011 New York Times headline for a piece in which teens shared  thoughts about the role of sexting in their lives. When asked “Is sexting ever O.K.?” one student answered, “It’s a way to express your feelings. If a guy and a girl are in love, instead of saying it face to face, they can say it through technology.” Other answers were more troubling, revealing the social coercion that often targets young girls: “At my school, if you like a boy and you want to get his attention, you know what you have to do. When I was with my last boyfriend I refused to sext and I would go through his iPod and find pictures of girls’ breasts [who were from] my school.” The students were also asked if they knew that sexting under 18 is illegal. “There’s a law?” one student replied. “I didn’t know that. How would you catch somebody when everyone does it?”

Elsewhere, The Atlantic tried to explain “Why Kids Sext” with a look at one sexting “scandal” that affected a Virginia county, and while the article’s answer was muddled, it did succeed in outlining the magnitude of this cultural shift: “Every time someone [the sheriff’s office] were interviewing mentioned another kid who might have naked pictures on his or her phone, they had to call that kid in for an interview. After just a couple of days, the deputies had filled multiple evidence bins with phones, and they couldn’t see an end to it.” But whatever kids themselves were saying about sexting and why they engaged in it, the act was soon the basis for cautionary tales that sent panic across parental and law-enforcement communities alike, stoked by headlines that borrowed the language of organized crime with references to “busts” and “rings.”

Teens have always had sex, and adults have always fallen prey to whipped-up scandals about it, from the crusade against sex education in the 1960s to the more recent panic about “rainbow parties.” But for those of us who were raised on the internet, sexting was inevitable. We learned to do everything else online, after all—why would sex be any different? Since the early years of sexting panic, we’ve seen something of a cultural accommodation for sexting, if only to admit that it is here to stay. The same way we adapted to binge-watching TV shows and summoning a car on demand from our palms, sexting was normalized not because people were willing to examine and reconsider their Puritian and slut-shamey instincts, but because it became clear that fighting its existence was a losing battle. After all, accomodation did not mean sexts were uncomplicated and harmless: We’ve watched as sexually explicit messages or photos—primarily those of women and girls—have been weaponized over and over again.

This happened on a mass scale in 2014, when a 4chan user hacked into Apple’s iCloud and posted more than  500 stolen nude photos of celebrities—mostly women—to the site. Referred to as “The Fappening” or “Celebgate” by media outlets at the time, this massive breach of privacy revealed exactly what the future of women’s safety online would entail. Sex was now online, and so was sexual violence.

I remember my mom telling me, as I entered high school, never to send nude images over the internet. “Those photos are never truly gone,” she told me, “and you never know what can happen with them, even if it is someone you trust.” Far from sexually active at the time, I could barely understand why someone would send nudes in the first place. My friends and I scoffed at the unsolicited dick pics that appeared on our Snapchats and were gone within seconds. We shared an “ew” and moved on, uncomfortable but still unaware of what a violation this was—whatever we felt about the images themselves, sending them was “normal.”

The idea of sending and posting nude images softened for many of us over time. As Instagram became an extension of our social lives and our identities, we began to see nudity online used as a celebration of self, gender, expression, and art. #FreeTheNipple took center stage online in 2015, challenging the objectification-driven censorship of women’s nipples in public spaces. Over the next couple of years, my Instagram feed became increasingly saturated with beautiful images of women I knew posing nude, sun drenching their skin through a nearby window, in an effort to desexualize themselves online.

My friends and I scoffed at the unsolicited dick pics that appeared on our Snapchats and were gone within seconds. Whatever we felt about the images themselves, sending them was “normal.”

An addiction to comments and likes made room for the body positivity, intimacy, and diversity of this reclamation of nude photos. Sending nudes to friends, in search of an “omg girl you are radiant” became common. Sexting a romantic partner, or even a more casual hookup, began lacking its previous taboo. After all the nonconsensually leaked nudes and sexual exploitation of women online, we took a different approach, seemingly in an attempt to claim autonomy in a chaotic online world. As if to say, you can’t use my own body against me if I put it online first. There was unfounded power in this, and joy too.

But not always. In October 2019, 31-year-old Congresswoman Katie Hill resigned from her position in California after naked photos taken of her without her knowledge by her abusive husband were distributed online without her consent. Although her story is not an easy or straightforward one, it’s clear that regardless of the progression of sexting as a practice, the way women are exploited online has yet to change. When nude images are nonconsensually published online, even those that were once taken knowingly or excitedly, the intentions and the empowerment of women themselves disappear. Women are stripped of their sexual autonomy; they no longer get to decide what a photo means or represents once it’s released as an emblem of her worth and respectability.

On December 2, a tweet about asking for consent before sending a sext set the internet aflame. The consent-before-sexting “script” that writer Suzannah Weiss laid out on Twitter for her followers encouraged people to preface an explicit text with a statement like: “I’ve been having some sexual thoughts about you I’d like to share over text if you’d enjoy that.” The sheer awkwardness of such phrasing became the butt of numerous jokes. But beyond the cringiness of it, the making fun seemed to hit more deeply at a prevailing confusion surrounding sex, consent, and communication online. Namely, how do we do it right? What does proper consent look like? How do we protect both ourselves and those on the receiving end of sexts from sexual violence online in a way that still feels authentic, the way sex is supposed to? This feels ridiculous, and yet we have to wonder what the alternative is.

I’m here to report that we still have no idea what to do about sexting, but it’s no longer primarily about the technology. We don’t know what to do about sexting because we still can’t figure out what to do about women’s sexual agency. The panic and confusion—and, ultimately, the violence—has always been about patriarchal control and suppression of women’s sexual desires, their agency, and their pleasure. When someone shares a nude sent privately with their friends, or comments “slut” on an Instagram post, or publishes their ex’s photos online, or secretly takes a video of the girl they’re having sex with, they are claiming ownership over another person’s body, choice, and sexual freedom.

Social media has upset whatever course human nature was on, and has left us in an unruly breeding ground for anonymity, public humiliation, information overload. I love it, I despise it, I grew up with it. It is inseparable from my relationships and, as hard as this is to admit, from my sense of self. There is a revolutionary (and democratic) power in social media, and women are not sleeping on its ability to foster communitiy and representation. Women have taken to their platforms of choice to declare their bodies—clothed or unclothed—deserve sovereignty online. But as we demand better, more autonomous, and more sex-positive lives, the pushback becomes stronger. Social media can give those harboring an entrenched distrust of women who affirm their own entitlement to sex and pleasure a platform with which to enforce their iron grip. And that may be “normal,” but it’s not right.