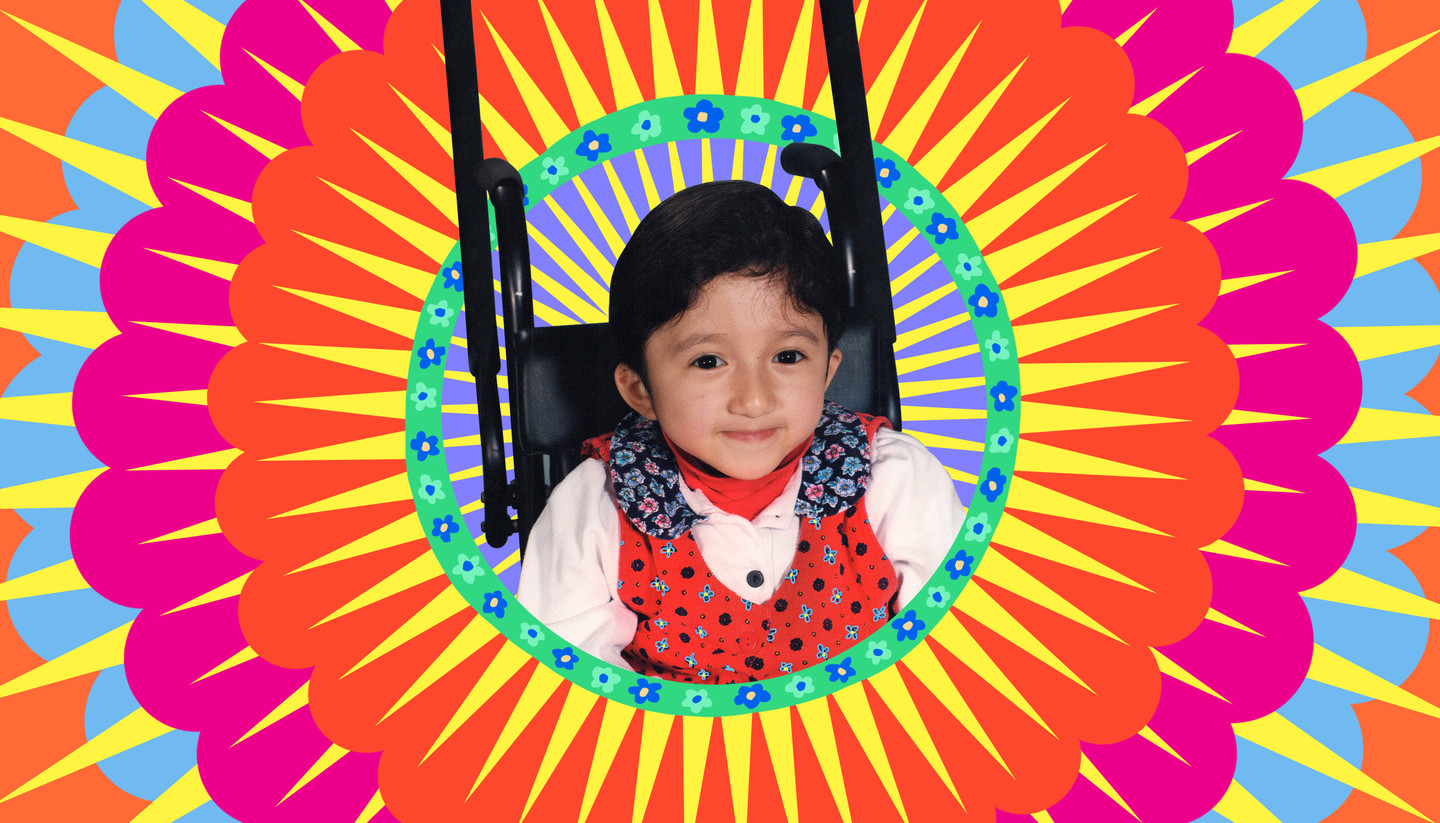 This story was originally published on August 1, 2018.

The day my nephew arrived, my family and I circled around in hushed excitement to take turns holding our brand-new family member. He’d arrived a little earlier than expected, but once he rejoined his parents on the maternity ward after a few hours in the NICU, we couldn’t wait to hold him. All except my mother, who hesitated to reach for her first grandchild, and looked at me instead of at him: “It’s because of you that I am so nervous to hold him.” The rest of my family, in wide-eyed adoration of the swaddled bundle, remained oblivious.

That nephew recently celebrated his first birthday, and in the flashing by of this year there was never an opportunity to excavate my mother’s comment. Instead, I have realized that wherever or however I’m confronted by stigmas of disability—and, being disabled since birth, I’ve experienced them often—the expectation is that my reaction should be muffled, and then tucked away. But it has become increasingly impossible to do either when my life as a disabled Asian-American woman is anything but tidy and quiet.

When I was a kid, my mother often retold the story of a disabled man in the neighborhood in Hanoi, Vietnam where she was born in 1960. “He couldn’t walk and would drag himself from door to door, begging. I was so afraid [that] I’d cross to the other side of the street to avoid him,” she would say. A moment of sharing a childhood memory with her daughter became a cautionary tale. “When you were born, at first I was afraid of you. But then with the support services available here I learned to take care of you. You should be grateful you were born in the U.S.”

But what if I hadn’t been born in the U.S.? What if I’d been born in any East Asian country? I wondered as a child. I never asked, maybe because I wanted to protect myself—or my parents—from having to know the answer. Now I understand the exchange of silence for the comfort of others as oppression; in this case because I still fear knowing how little value my life might hold for others.

On the same continent and yet a world away from Vietnam, a man named Deng Pufang began the push for the social equality of disabled people in China at the peak of 1968’s Cultural Revolution. It’s still unclear whether he jumped from a window of a fourth-floor building at Beijing University or was pushed by members of Mao Zedong’s Red Guard, but the result was the same: Pufang was paralyzed from the waist down. As the first son of Deng Xiaoping, a political opponent of Mao who would later lead the People’s Republic of China, Pufang’s status allowed him to use his own disability to spotlight the discrimination and oppression of his fellow disabled citizens. Pufang created the China Welfare Fund for the Handicapped, and chaired the China Disabled Persons’ Federation. Both platforms initiated a humanist approach towards educational and employment opportunities among others for a lucky fraction of the country’s disabled population.

These burgeoning shifts in attitude toward people with disabilities would not begin until the mid-1980s. Although both my parents had ties to the country, these changes never reached them. An only child, my mother and her family fled Vietnam as refugees to China, but by the early 1980s had emigrated to the United States—around the same time as my father, his parents, and his three younger siblings left Hong Kong for the States. As life began to change for disabled people in China, my parents were on the other side of the world.

The erasure of disabled people is one of the most common international crimes against humanity.

The Chinese language shaped the perceptions of disability that my immigrant parents carried with them to their new homes. It wasn’t until the 1990s, for instance, that the Chinese characters used to refer to people with disabilities changed from canfei (“useless”) to canji (“sickness or illness”); the push to understand disability as a social construct has been under way for less than a decade. Media professionals in China are now encouraged by the Chinese disability advocacy organization One Plus One to use the characters cán zhàng (“disabled and obstructed”) when reporting on disability issues. But such language remains a suggestion rather than an expectation, and its impact has yet to filter out to the public.

My birth was met with the sound of a family split into opposing sides: Some relatives told my mother she should abandon me at the hospital because my disability diagnosis meant I was canfei, a “useless burden.” Other relatives advised caution: “The heavens wouldn’t give you anything more than you could handle, she is a blessing.” In the end my parents named me after my Great Aunt Sandra, a benevolent woman who housed and supported relatives as they worked towards U.S. citizenship. And the characters of my Chinese name, Hoa Tien Yun, translate to “gift from the heavens,” were chosen.

I am a culmination of old East Asian attitudes and new immigrant possibilities. My identity began with an American ideology of belonging and an existence that ties me to some divine test for my parents. I cannot separate one set of meanings from the other. The erasure of disabled people is one of the most common international crimes against humanity. In 2016, a Japanese man who was outspoken in his belief that all people with disabilities should be euthanized massacred 19 disabled people and injured 26 at an institution in Sagamihara, Japan. Two years later, the victims still haven’t been publicly named—reportedly out of respect for their families, who wished to avoid the stigma that comes with having disabled family members.

The secondary tragedy of Sagamihara is that we can never be sure the victims were ever named on their own terms while living, never mind in their deaths. In the aftermath, the international disabled community is left with an emptiness. I’ve answered my nagging childhood question: It’s doubtful that my quality of life would have fared much better whether I was born in one East Asian country or another.

Whether in East Asia or the United States, cultural values validate the narrative of worthy versus unworthy bodies. But the entire discussion needs to be rewritten as the work of marginalized creators and activists repeatedly point out that there are no unworthy bodies. This lodges an innate discomfort into the very core of cultural norms that are shared by both continents: I mentally steel myself for disagreements from relatives whenever I bring up headlines of violence or oppression involving victims and/or abusers who share our ethnicity. I find myself strategizing my battles, not wanting to lose my hold on any scrap of presence I’ve struggled to claim, both within my family and outside of it. Every loss or win is not a personal best kept just for me; instead, it’s a scorecard passed on through generations and across oceans. Too much is at stake.

Taking up space as a disabled person is always revolutionary. To have a name is to be given the right to occupy space, but people like me don’t move easily through our society, and more often than not survive along its outermost edges. In giving me my names, my parents—despite their flaws and missteps—provided one of many ways for me to access the cultures I claim. They knew that whatever paths I come upon would become mine to navigate as a disabled Asian American—whether as Sandy Ho, or Hoa Tien Yun, or both.

It is a privilege to never have to consider the spaces you occupy. I come to this realization anew every time I do the work to anchor Sandy Ho and Hoa Tien Yun to the world, and it is exhausting to still need permission to encompass all of myself. But in the spaces formed by marginalized disabled people, my existence is allowed on our shared world map in a way that is liberating simply because here, I am presumed whole.

Whether I am in Asian spaces or American spaces, I traverse through life as a disabled Asian American woman. Reconciling these worlds in my mind and in my heart is my ongoing struggle to reach a place of self-love. Asking for my family to listen to me would only offer a temporary and partial resolution—it would not be enough. As a marginalized disabled person I want it all: for all of us to remain as fixtures in our shared worldviews, for the spaces to do more than survive, and for our voices and presence to experience the indelible freedom that comes with being louder. 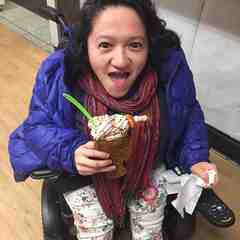 Sandy Ho is an Asian-American disabled community-organizer, activist, and policy researcher. She was born, raised, and educated in Massachusetts. Sandy is the founder of the Disability & Intersectionality Summit and claims residence in three communities: disability, queer, and Red Sox nation. Her favorite places are the libraries in the cities she visits. Sandy recently traveled from Chicago to San Francisco on a train so that's all she ever dreams about: train travels and baseball season. She collects sand from all around the world but it's not because her name is Sandy.