There Is No “Good Place” For People With Disabilities | Bitch Media

There Is No “Good Place” For People With Disabilities

I was 12 when I first shared with my grandmother that I was struggling at school because of my ADHD. After listening to me, she took my hand and smiled. “It’s gonna be okay, my Abber-dabber,” she assured me. “God will help you through it if you ask him to. He will make you better.” My grandmother undeniably meant well. In the same way, I’m sure, NBC’s The Good Place meant well when, in the Season 2 premiere, the afterlife’s head honcho Michael (Ted Danson) questioned why an extra in his hellish drama would want a limp. The comment sprung from a short, seemingly throwaway conversation between Michael and Vicky (Tiya Sircar), the once famed “Other Eleanor”–turned–pizza-shop owner who wanted a “limp” to stand out. “This is supposed to be the good place,” Michael responded. “Why would you—?”

Vicky’s request came out of nowhere, but Michael’s response to her plea ventured into more questionable territory. At best, the comment implied that in heaven injury doesn’t exist. If a simple, seemingly painless limp doesn’t exist in heaven, do people with disabilities? Michael Schur’s critically loved comedy is an undeniably clever exploration of what it means to be “good” enough for heaven, and a realistic, racially diverse vision of who lands in hell. But so far, that diversity hasn’t included any discernible disabled characters. To be fair, we haven’t actually seen the titular “Good Place,” so we can’t be sure people with disabilities don’t exist in that positive, pan-religious afterlife. But we do know, per Michael, that no one with a limp would be there. We also know that Chidi (William Jackson Harper)—a sweet but anxiety-ridden professor of philosophical ethics—is the closest any of the characters have gotten to living with disabilities… and he exists only in hell. 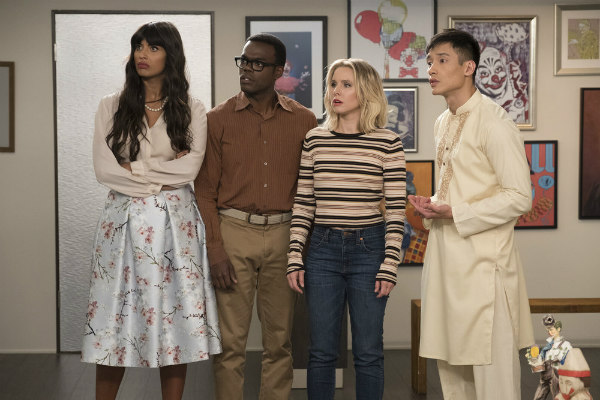 Across religious texts, there is conflicting language about disabilities. They have been interpreted as a test of spiritual will. Practitioners of the same faith can even differ in how they interpret messages: In Hinduism, Karma and the concepts of accepting suffering can be seen as ways to help people with disabilities accept themselves, while in the Qu’ran and Old Testament there are several verses about God creating all men in the perfect or best image.

But there have also been interpretations that center disability as something to be cured, or as a form of spiritual and moral corruptness. Some language is more direct—Martin Luther once said that “all grave infirmities are blows and strokes of the devil,” and the King James bible offers a passage that reads, “And in that same hour he cured many of their infirmities and plagues, and of evil spirits.” The Jewish Tanakh states that no descendants who are “a blind man, or a lame, or he that hath any thing maimed” shall come near “to offer the offerings of the Lord.”

Others can use disparaging concepts more figuratively, such as when the Qu’ran states, “Such are the men whom Allah has cursed for He has made them deaf and blinded their sight,” and in Hinduism, where physical disability can be interpreted as the result of punishment for a past-life transgression. While religion can treat disability as just another natural facet of humanity, the language, whether literal or figurative, can also cast it as a sin and look for ways to cure or justify its existence.

While the latter interpretations are unsettling, they are interesting in the context of The Good Place, which focuses on the general relationship between moral purity and spirituality. If Chidi doesn’t have a disability, the show—like some religious subtext—implies there’s no space for us as we are, whether we’re dead or alive. But since everyone in “The Good Place” is spiritually corrupt, Chidi’s presence could reinforce the idea that people with disabilities land there not because of their bodies or minds, but because of their hearts and souls—just like everyone else. 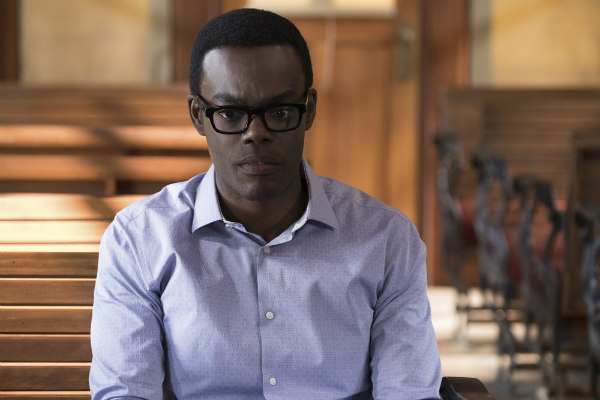 But if we have a presence “in hell,” it becomes even more important to have a presence in heaven, too. Only existing in The Bad or Medium Places can further demonize disability. Michael’s response about Vicki’s limp may have been a throwaway, but it also revealed the ways religion and our larger culture can treat people with disabilities: as something that needs to be cared for or fixed, because we’re seemingly broken—physically, mentally, morally. If able-bodied and neurotypical people arrive in heaven or hell with bodies and souls that are as spiritually virtuous or as spiritually blighted as they were in life, why wouldn’t we?

This is not to say that people with disabilities have to retain disabilities when their spirits pass on. It’s to say that able-bodied people shouldn’t be defining the language and imagery of our divine intervention and punishment. There is no need to be made physically or mentally “whole” again, whether by some higher power or through the act of death. We are already whole. God didn’t need to fix me or my ADHD—all I needed was an IQ test and a professional to confirm that I should have a private, quiet room in which to take my tests.

Through The Good Place’s representations of race, gender, and class differences, the show declares that we are all born, become either horrible or great people, and die. In that way it far surpasses other dramatic manifestations of the afterlife. So why, in a place where Asian men can be attractive silly goofs; Black men can be husband-material moral geniuses; Pakistani women can be seemingly perfect, beautiful snobs; and a white woman who grew up poorly can be the everyman, can’t people with disabilities exist? Aren’t we people, too? Disabilities aren’t moral wrongs or sprained ankles that need to heal. So let us own punnily named restaurants and let us be soul mates. Whether it’s dyslexia or cerebral palsy or Autism, let us reckon with our ethics and show us being rewarded for the good (or bad) people we are. Let the moral scales and the fight for our spirits—not some fight over our supposedly corrupted minds and bodies—justify our presence in the afterlife.

Relevant: More Than Our Machines

by mailee.hung@gmail.com
In the future, you can lose all your limbs and remain enfranchised.