“The Handmaid’s Tale” Explores the Resilience of Women | Bitch Media 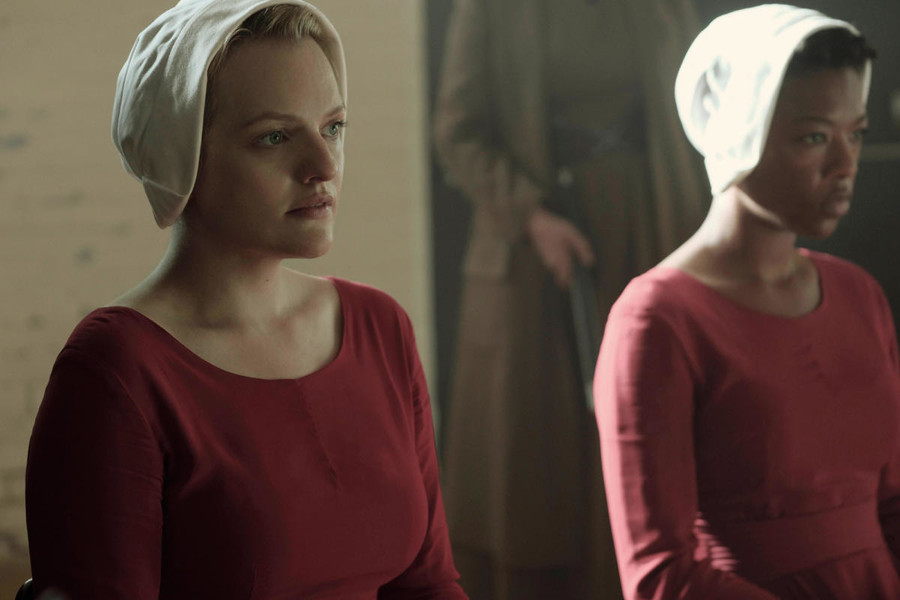 The Handmaid’s Tale and 1984 have been getting a lot of attention lately because they’re so relevant to our nearly dystopian political climate. These dystopias seem to represent two distinctly gendered models of attempted survival during impossible times. While 1984 argues that resistance is futile, The Handmaid’s Tale speaks to us from a place of uneasy hope borne of the knowledge and skills that women have always used to survive, such as maintaining in the face of defeat and resisting everyday tyrannies.

In their own way, Winston and Offred both defy the monolithic political machine that attempts to strip them of their humanity. However, while Winston is tricked, trapped, and eventually brainwashed by The Party, Offred is led toward freedom by representatives of a rebellious faction. But it is not just their fates that diverge. They were set on different paths from the moment they were born into societies that not only restricted their freedoms, but also defined those freedoms through their respective gender identities. This imposed gender binary reveals the crucial lessons that women learn about survival—lessons that lead them, in author Margaret Atwood’s world and our own, to play a critical role in the successful resistance to tyranny.

You must notice the small things. Winston experienced the incremental slide toward totalitarianism so impersonally that he can barely recall a single, significant thing that changed, except for a vague notion that people were “freer” before. Offred, on the other hand, remembers each of the seemingly insignificant ways in which the government slowly took control of women’s lives. Acknowledging them is key to her survival. Offred’s hyperawareness compared to Winston’s obliviousness is not simply a difference in literary style. Remember all the white men who told women to “calm down” in the aftermath of Donald Trump’s election? “Give Trump a chance,” they begged.

Women of different racial, cultural, ethnic, and socioeconomic communities, however, organized marches across the country to speak out against the Trump administration’s proposals. While columnists like Jonathan Chait and David Frum told us not to worry over little things, Amy Siskind immediately started a series tracking the subtle changes that occurred week-to-week so that we would not become desensitized. Lauren Duca launched her Thigh-High Politics column in Teen Vogue to keep young Americans informed about their rights. And Bitch Media turned its focus toward keeping the Trump administration accountable with the FUCK ITT list. Women know that by the time men decide to start worrying, it’s often too late.

No one can take your truth.

Women have been training for the battle over memory and truth our whole lives. Being told we are wrong—that what we know happened to us did not happen—is a daily battle. In 1984, Winston sees truth as necessarily reliant on collective agreement. Once his torturer, O’Brien, is able to prove that his own mind’s perception of facts is fallible, Winston begins to crumble. A woman would have laughed in O’Brien’s face if he’d attempted to base his entire brainwashing on the subjectivity of truth. “Oh, honey,” she would say, rolling her eyes, “if I had a nickel for every man who told me I was wrong…” This would, of course, frustrate O’Brien, and he would have, as he did with Winston, taken his frustration out on the woman’s body. This, too, is something we are prepared for since women’s bodies have historically been a battleground. The moment Winston looks in the mirror and sees how broken his body has become, he loses faith in humanity entirely. The Handmaid’s Tale begins with the breaking of women’s bodies, and argues that it will take more than that to break our souls.

You are not the hero of the story.

Offred survives because Atwood withholds heroic traits. It is Winston’s belief in his own heroic nature that destroys him. This is the case for so many male protagonists who meet disastrous fates. Seared into our collective memory is Mitt Romney’s tragic smile as he traded in the small amount of integrity he had left for a chance at a position in the Trump administration. Meme-ified a thousand times over is Chris Christie’s face as he endorsed the president only to be immediately verbally humiliated by him at the same podium. Like Ahab in the moment before he knew the whale would win, or King Lear howling into the wind, a man who suddenly realizes that he is not the victorious hero he imagined himself to be is one of nature’s most pathetic creatures.

But Offred has no such notions of grandeur. She knows that there are hundreds of handmaids throughout the country and there are other women who have been dismissed even more violently: Nuns who are killed if they do not renounce their faith, Jews who are forced to convert or emigrate to Israel, African Americans who are forced to “resettle” to an apartheid-like “homeland” in the Midwest. It is this self-awareness that has allowed American women with varying levels of privilege and access to lead the current resistance. While the men on television scramble to be the first to mark the moment when Trump finally “becomes president,” women like Soledad O’Brien, Joy Reid, and Maxine Waters do the daily work of resistance by speaking truth to power. The Tax March, the Science March, and the Black Lives Matter movement have all been bolstered by the active work of women who understand that the fight is bigger than any one person or idea. They look not to be the hero, but to play their part in the larger, and hopefully triumphant, American story.

We are informed by Atwood’s epilogue that in the not-too-distant future, the cruel regime that imprisoned handmaids has been replaced by a more progressive, liberal society. Winston, on the other hand, is completely brainwashed by The Party because power and violence are the only factors in the masculine world that George Orwell paints. But Orwell is dangerously wrong about us. What Atwood understands is that power and violence has always been inextricably wrapped up with totalitarianism and patriarchal liberalism. As an English teacher, I’ve always been struck by how many of my students accept individual aspects of 1984’s dystopia—such as government surveillance and language manipulation—as reminiscent of our own society’s ills, but reject the overall allegory. They think 1984 represents a world that’s too purely evil to be our collective destiny.

The Handmaid’s Tale, on the other hand, presents a world that, like ours, is full of well-meaning men whose motivating factor is fear; women who would rather cling to such men’s fears than find solidarity with the women they agree to exploit in the name of maintaining their own status; and women who have been preparing to fight their entire lives. Winston’s story ends with his defeat at the hands of the state. His female counterpart, Julia, who lived successfully in secret defiance of the state before she met him, is also destroyed by the knowledge of his betrayal. But while the rebels of 1984 are stripped of their humanity, Offred remains steadfast, reminding us that we are always only a hairsbreadth away from the worst. But that is also why Offred’s story is a tale of hope, not in men, but in women who know what it takes to survive.