This story contains spoilers for the first three episodes of season two of The Handmaid’s Tale.

There’s no dignified way to put this: My initial response to watching the second-season premiere of The Handmaid’s Tale was a full-tilt panic attack. The episode opens with a mass of confused, muzzled handmaids being herded into what was once Boston’s Fenway Park, now converted to a family-sized gallows. By the time the scene, scored to Kate Bush’s “This Woman’s Work,” reached its crescendo, I was dizzy and nauseated and had to close my laptop until I could regroup and revisit the rest of the episode two days later. Honestly, if Hulu really wanted to build suspense for the 13-episode follow up to last year’s Emmy-winning adaptation of Margaret Atwood’s dystopian classic, the press packet should have come with a Xanax prescription.

This shouldn’t come as a surprise to anyone familiar with either the show or its source material. Yet the show’s first season ended with a few pinhole points of light breaching its heavy, unstinting sorrow: Moira (Samira Wiley) escaped to Canada, where she reunited with June’s (Elisabeth Moss) husband, Luke (O-T Fagbenle); June found a kind of solace in the stack of letters Moira smuggled out of Jezebels, from women begging the reader to not let their lives be forgotten. The handmaids collectively defied Aunt Lydia (Ann Dowd), banding together and refusing to participate in the murder-by-stoning of one of their own.

The final scene found June/Offred musing, as she was taken by the Eye and loaded into a menacingly shiny black car, “Whether this is my end or a new beginning, I have no way of knowing.” But if the second season’s two-episode opener is meant to set the tone, those brief sparks of possibility have been decisively snuffed out: Things in Gilead are bleak as shit. The bastards, it turns out, have gotten us down. 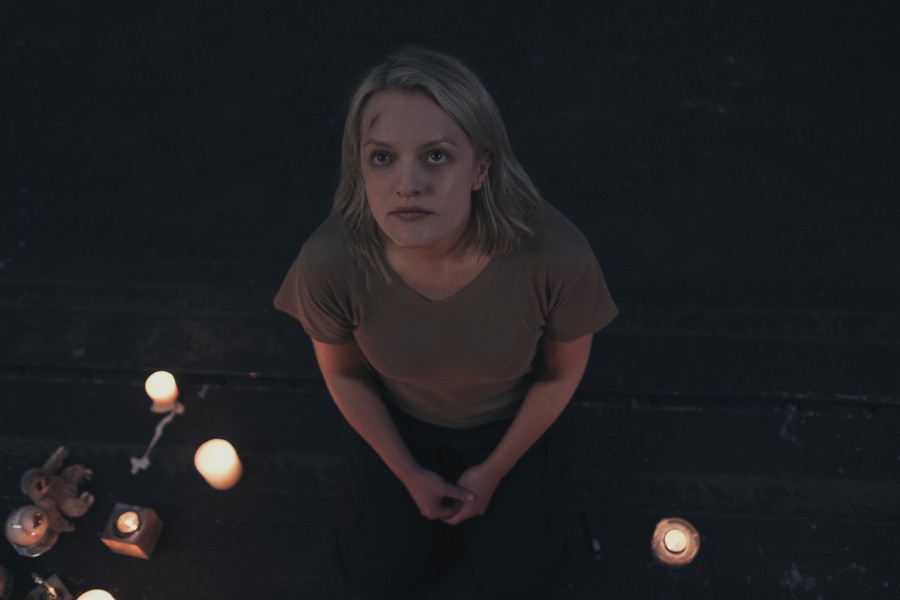 “They never should have given us uniforms if they didn’t want an army,” stated Offred in season one’s final episode. But as the new season begins, Offred is very much alone. As a newly pregnant handmaid, she’s granted a measure of special treatment; as the ringleader of rogue handmaids, however, her punishment is engineered by Aunt Lydia to ensure that she is as  isolated as possible. As Offred, Elizabeth Moss’s remarkable economy of expression makes dialogue sometimes seem secondary; with the narrative now going off-book, Moss’s physical embodiment of the character is even more potent with all that she doesn’t say.

As the first episode closes, we see Offred’s face harden and then set as she realizes the vastness of her solitude and the hollowness of once believing that she was marked for survival—by Nick, by the Commander, by Moira. She can no longer count on aid from outside; enduring Gilead is now a solo mission. If the show’s first season established the rules and regulations in Gilead, the theme of its second is survival, and the narrative unfurls both within and beyond Offred’s world, displaying the full toll this oppressive regime takes on its women regardless of their place in its hierarchy.

The second part of the premiere, “Unwomen,” reunites viewers with Emily, formerly Ofglen (Alexis Bledel), and explores the life of the women literally put out to pasture when they are too infertile, too mouthy, or too gay for life as handmaids, Aunts, or Marthas. They spend their days shoveling toxic waste atop the radioactive hills of The Colonies, and their nights in cramped barracks drinking contaminated water and waiting to die. As Emily befriends a doomed coworker (Marisa Tomei), the episode flashes back to her former life as a university professor who, as the shifting regime comes into focus, unwittingly has two strikes against her. She’s married and has a child with another woman (Clea DuVall), but she’s also a cellular biologist—likely a further subversion when we recall that the political coup that became Gilead was the result of a fertility crisis propelled by man-made environmental devastation.

But if Offred and Emily represent the worst of what Gilead offers women, The Handmaid’s Tale also underscores that their tormentors—Aunt Lydia, Serena Joy, and others—are hemmed in by their own circumscribed roles. To her charges, Aunt Lydia speaks of “Freedom to, and freedom from,” but Gilead’s social architecture ensures that all its women have almost none of either. And that brings us to the men.

Last season, they did little beyond glowering, smoldering, and gaslighting; my hope is that, as new episodes retraces the steps that systematically took freedom, identity, and self-determination away from women, it also reckons with the active harm wrought by men. Turning women against one another has always been the cruel genius of patriarchy: Men get to sit back with their brandy snifters and leather-bound books as though the horrors enacted on the bodies and psyches of women have absolutely nothing to do with them. Men, in Gilead and in real life, have no shortage of help here: Even with #MeToo and #TimesUp still pulling much-needed voices center stage, our media regularly refuses to name the problem, speaking and writing in the passive voice about harassment, abuse, and violence.

We’ll hear that a woman “was sexually assaulted” on campus, or that a prominent actress “experienced a pattern of harassment” on movie sets, but coming right out and saying that the problem is with men—with men’s fear, their fragility, their cultural conditioning—is simply a bridge too far. The power and fascination of The Handmaid’s Tale lies in the dynamics between complex women characters, but in each flashback to a pre-Gilead time, it’s chilling to see the ease with which men in power adjusted their beliefs in what was safe and what was moral to ensure their own comfort.

When The Handmaid’s Tale premiered in 2017, the parallels between Gilead and the United States felt uncanny. Now they feel unrelenting: The second season lands in a time when the anti-woman undercurrent of this presidential administration has become a riptide of overt sexism. At this year’s UN Commission on the Status of Women, Trump’s administration announced its intent to expand restrictive policies on abortion and contraception; meanwhile, the Department of Health and Human Services announced last week that its funding of sex-education programs for teens would prioritize the kind of abstinence-only curricula that has already proved not only ineffective, but dangerous.

Elsewhere, a conservative writer who has stated that women who have abortions should face capital punishment—specifically, hanging—has relentlessly pimpled the news cycle while complaining that his maverick views are being silenced. The redemption arcs of boldfaced names (Matt Lauer, Louis C.K., Quentin Tarantino) have put the lie to the once-widespread media belief that #MeToo would ruin the careers of alleged abusers and turn them into social pariahs. And just this week, a young man radicalized in the pervasive misogynist rhetoric of the manosphere plowed a van into a Toronto crowd, killing 10 people. The Facebook post he wrote shortly before the attack praised Isla Vista mass shooter Elliot Rodger, whose 2014 manifesto (which stated that women “should not have the right to choose who to mate with. That choice should be made for them by civilized men of intelligence”) has become, in some corners of the internet, an inspirational document—The Art for War for incels.

If you want distraction and escapism, you already know that The Handmaid’s Tale is not your show. I’d argue that it’s important to watch anyway, in a know-your-enemy kind of way—for many women, after all, much of this dystopia is all too real. It feels wildly wrong to appreciate the formal beauty of the series—the spare settings, the luminous close-ups, the tableaux of saturated monochromes—while its soul-scraping narratives play out. Far more urgent is its reminder that failing to acknowledge a coming storm is a privilege only for those who know they have the power and resources to weather it. If you need to chase each episode with something cheerier, I’m right there with you.

Who's Assigned to Write Most of the Articles About Reproductive Issues? Men.

When It Comes to Reproductive Rights, We Need More Than Science on Our Side

Yes, We Sketch Too