“The Hate U Give” Embodies the Double Consciousness Theory | Bitch Media

The Hate U Give | Official Trailer [HD] | 20th Century FOX

In The Souls of Black Folk, W.E.B. Du Bois describes “double consciousness” as the difficulty of “always looking at one’s self through the eyes of a racist white society and measuring oneself by the means of a nation that looked back in contempt.” It’s the principle that guides The Hate U Give’s Starr Carter (Amandla Stenberg) until a tragedy merges her two worlds. The Hate U Give, based on Angie Thomas’s bestselling young-adult novel, examines Starr’s relationship to Blackness after she witnesses the police-involved death of her childhood friend Khalil (Algee Smith).

Until Khalil’s death, Starr’s life has been marked by a strict dichotomy between the low-income and predominantly Black Garden Heights neighborhood that she calls home, and Williamson, the upper-middle class, predominantly white prep school that she and her brothers attend. When she goes to Williamson, the markers of her Blackness are stripped away and she begins code-switching because “Williamson Starr doesn’t give anyone a reason to call her ghetto.” Being stereotyped as the “angry Black girl” isn’t a petty or trivial concern.

The social consequences Starr fears are real, and for her, assimilation is a survival tactic. A 2013 study published in the Sociology of Education found that Black boys who attend white suburban schools have an easier time fitting in due to “positive” associations with their athletic skill and presupposed “coolness.” While those assumptions are reductive and limiting, they provide an avenue for integration. For Black girls, however, fitting in is much more difficult because they’re positioned as loud, aggressive, and unapproachable, leading to increased, disparate disciplinary actions, including a suspension rate that’s six times that of their white female peers. In other words, Black boys are socially rewarded for confirming or reinforcing problematic stereotypes about Blackness while Black girls are harshly punished.

In the aftermath of the shooting, Starr struggles to hide the trauma and fear she’s feeling from her social circle at Williamson. Though her boyfriend Chris (KJ Apa) and best friends Hailey (Sabrina Carpenter) and Maya (Megan Lawless) know that something has changed, she finds it difficult to confide in them because she believes they’ll perceive her differently if they know where she’s from and what she’s witnessed. As a result, Starr is left to deal with a deeply traumatic event without a reliable school support system. Being the sole witness to Khalil’s shooting also pushes the feelings she’s been suppressing to the surface. Suddenly, microaggressions are more difficult to ignore. Slick comments from her white friends are harder to get over.

In the wake of Khalil’s death, Starr no longer thinks about Blackness as an abstract concept that she’s exempted from because of the school she attends and the friends she’s made. Over the course of the movie, Starr’s relationship with her white friend Hailey (Sabrina Carpenter) deteriorates because Hailey makes flippant racial comments and insists that Starr’s new interest in racial-justice work is offensive. When Hailey suggests that Starr should pretend a basketball is “a piece of fried chicken” so that she can catch it better, Starr is furious, but second guesses her rage. And when the Williamson students stage a “protest” in support of Black Lives Matter but use it as an excuse to skip class and party, Starr is forced to acknowledge the ways in which her identity is diametrically at odds with her friends.

Later, Starr confronts Hailey about unfollowing her Tumblr account after she posts a photoset featuring the brutalized body of Emmett Till. For Starr, posting the photo is an acknowledgment of the baggage that comes with being Black in a space populated by white people. For Hailey, it’s a sign that Starr is becoming one of “those Black girls” who “makes everything about race,” a transgression against the supposed racial neutrality of their majority white school. This tension comes to a head when news reports confirm that Khalil was unarmed at the time of his death, and had been holding a hairbrush, not a gun, when he was shot. Hailey’s insistence that “a brush looks like a gun in his hand” pushes Starr to her breaking point because her friend’s racism is no longer masked or diminishable. 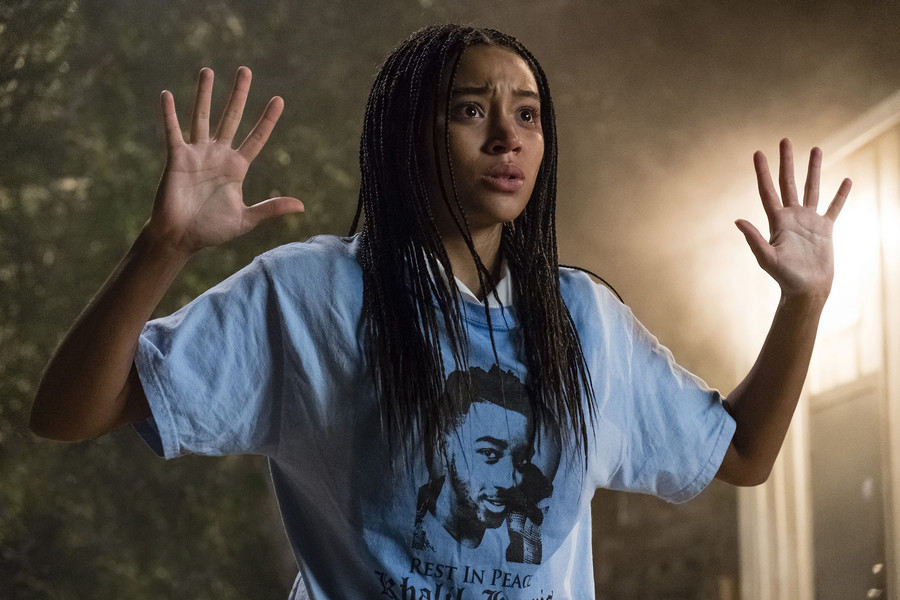 No matter how she speaks or what school she attends, Starr will never be safe from the assumptions her peers will make about her, her neighborhood, or her friends. After all her meticulous efforts to avoid anything that would code her Black body as “street” or “urban,” she’s committed the biggest sin of all: distinguishing herself through her Blackness and her anger. Even Chris’s well-intentioned insistence that he “doesn’t see color” at their prom is slightly infuriating because as Starr retorts “if you don’t see race then you don’t see me.”

Throughout the film, many of Starr’s choices are rooted in her desire to maintain her dual identities. She stifles righteous rage and ignores threats to her personhood in order to remain assimilated into her white peer group, but she cannot erase her Blackness and shouldn’t have to swallow bile in order to survive. Speaking up for Khalil means “outing” herself as “Garden Heights Starr” and living in the truth of being a girl from a neighborhood riddled with crime and drugs, but also community and love. By the end of the film, Starr has internalized this message and is happy to be “just Starr.”

While things have changed, she finally has the freedom to deal with them with the entirety of her person, without having to hide the particular stresses of being Black in a white space.

The Orientalist Narrative and Erasure in "Whiskey Tango Foxtrot"