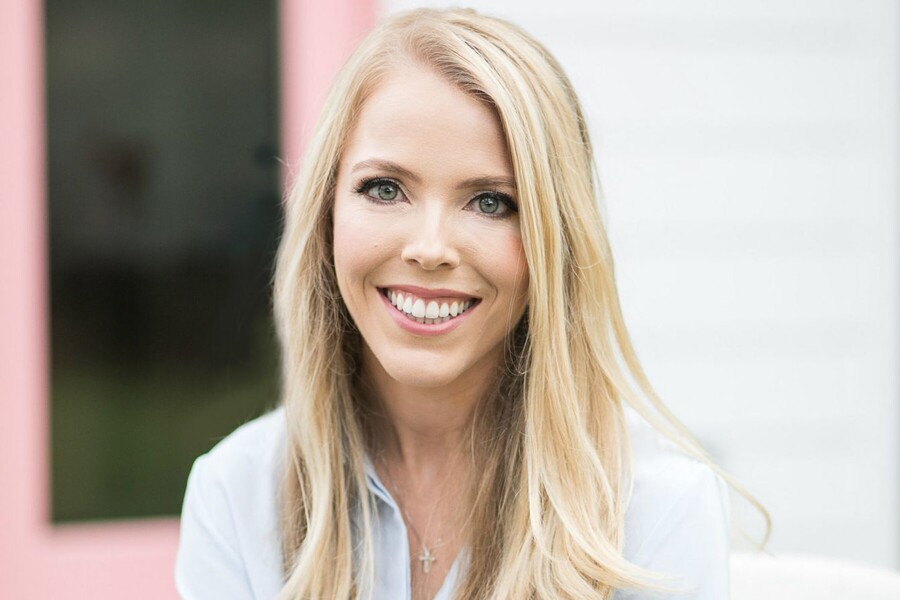 At the beginning of her second adult novel, The Husbands, Chandler Baker asks us to imagine a world where all the husbands “listen to voicemails and make dinners and rinse our Keurig machines.” In this alternate universe, adults effortlessly communicate as they raise their families, and in households without children, couples still maintain a semblance of equity. Everyone equally participates in keeping house without being asked or prodded. It’s utopic and perfect in ways that made me wonder if this world is possible. Nora Spangler wishes she lived that life. When we first meet her, she and her husband, Hayden, are looking for a house in Austin, Texas. They decide to search in Dynasty Ranch, an idyllic, suburban neighborhood with affordable homes, lower property taxes, and more room for their toddler and the new baby that’s on the way. Nora’s practically swooning as they tour a home, but her husband isn’t so sure—a common mismatch in their marriage.

We’re keyed into Nora’s thoughts after the house tour: the fact that Hayden disappears and can do nothing else while he watches Liv, their four-year-old daughter, “is a source of raw frustration.” She’s also frustrated by “a few concerns about [her] track record…at the firm” where she is up for partner. Simply put, Nora’s upcoming maternity leave is affecting her ability to become a partner. Despite her annoyance, nothing seems truly out of the ordinary in Hayden and Nora’s family. In fact, the novel begins just like any romance novel might; nothing is sinister or out of place. The challenges lay in the actual communicating. When she does communicate, Nora’s inner monologue admits to “never [feeling] less sexy” than when she keeps a scoreboard of her and her husband’s contributions to their family. Yet, she must tell him how she feels. We can’t read each other’s minds (yet), so we can’t expect our significant others to know what would be helpful to us. Baker says, sure, but what if you could?

Enter Cornelia White: a psychiatrist living in Dynasty Ranch who specializes in couples therapy. With the clicking of a very specific pen, given to every wife in Dynasty Ranch, Cornelia hypnotizes the husbands in her therapy sessions, but Nora doesn’t immediately know that. Cornelia, acting as liaison for Penny March, hires Nora to investigate the death of Richard March after his home in Dynasty Ranch burns down. As the Spangler family discusses buying a home in Dynasty Ranch and as Nora investigates Richard’s death, Nora begins ingratiating herself with Dynasty Ranch’s residents. She attends a couples dinner party, a yoga session, and even invites them to her baby’s gender reveal party. Prior to the gender reveal party, Nora realizes that the wives of Dynasty Ranch, even with their perfect lives, have “experienced marital discord, just like [Nora]. The only difference is that they’re saying it can be fixed.” At the party, Nora has an outburst when Hayden fails to recognize that she doesn’t want to talk about her work or her blood pressure with his mom, and she smashes the cake that reveals they’re having a baby boy.

This time, instead of keeping her frustrations to herself, Nora suggests couples therapy with Cornelia. This is the first time Hayden actually hears Nora when she says something’s broken in their marriage. Unfortunately, it took pregnancy-induced  high blood pressure dand smashing a cake to help him realize their family isn’t as happy as he believes it to be. We’re led to believe that attending marriage counseling is a great thing for Nora and Hayden; maybe something good will come from this. At this point, the book doesn’t feel like a thriller; it’s a novel about married people with a focus on how Nora is going to handle her career and family life. We’re expecting Nora and Hayden to go to therapy, learn to communicate, and decide if divorce is the best option or if their marriage can be saved.

Nora and Hayden both vent during their therapy sessions. Nora comes clean about her frustration around Hayden seemingly having no clue about what’s going on in their house. Hayden admits that he resents Nora for the mysterious accident that has caused their daughter a multitude of scars. Finally, she and Hayden are communicating. Their life and their marriage seems better, despite the fact that Nora is working more than ever as she investigates Richard’s death. After a few therapy sessions and hundreds of hours digging into the March case, Nora finds her home more than taken care of than it has ever been. Hayden makes Rice Krispies for a bake sale, makes sure Liv is dressed for Picture Day, and starts cooking dinner without being asked. He even starts to read some of the organization and cleaning blogs that the husbands of Dynasty Ranch suggested to him. A part of Nora loves being taken care of her and “wants to murder feminism herself” in lieu of being rescued by her prince, so she lets Hayden take care of things. She’s more focused at work, and she’s happier when she gets home. Nora’s life seems almost perfect.

Just as Nora has convinced her husband to buy a home in Dynasty Ranch, she begins connecting the dots on several clues in the March case. First, Max Ross, husband to tech CEO and neighborhood Homeowner’s Association leader Alexis Foster-Ross, doesn’t recognize Nora when he sees her for a second time. In the same scene, Alexis mentions to Nora that the neighborhood doesn’t “have a lawyer yet,” as if they’re only welcoming residents based on if they have a career that could benefit the overall community. Out of the blue, Sylvia Lamb contacts Nora when she hears about the investigation and confirms this odd fact by sharing that once she quit her job as a wealth manager to become a full-time stay-at-home mom, her family’s housing contract in Dynasty Ranch fell through. Nora asks the women of Dynasty Ranch about this, but they brush her off saying, “Sylvia’s claims are ludicrous.” 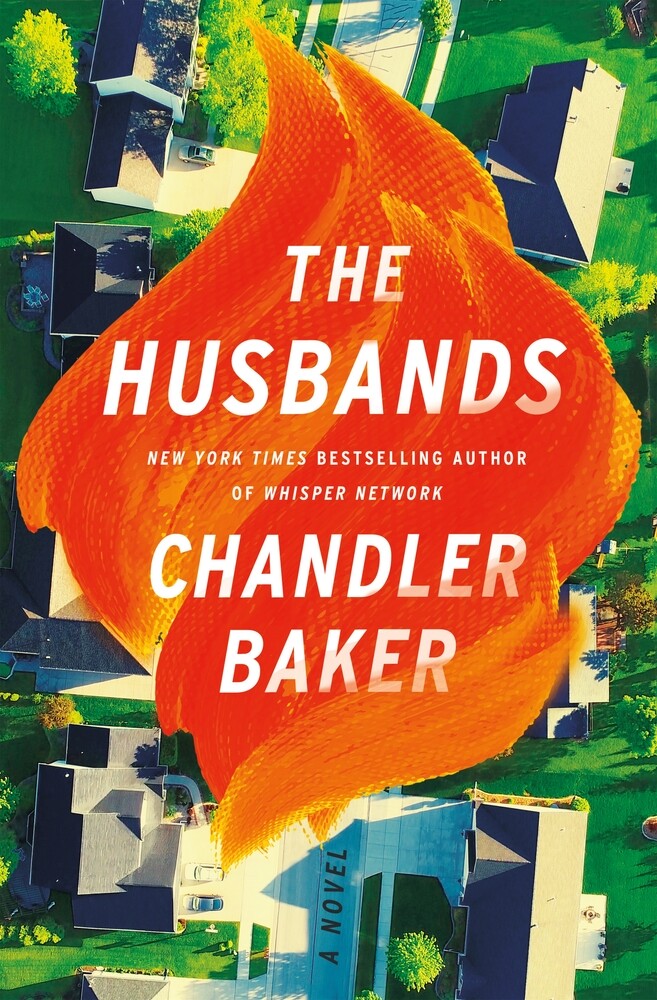 Cover of The Husbands by Chandler Baker (Photo Credit: Courtesy of MacMillan Publishers)

But as Nora pursues leads in Richard’s death, she wonders if the many unravelling ends of Dynasty Ranch aren’t true after all. While Nora attempts to balance a work and home life, Baker has written a novel that speaks to many women, and that’s what is actually scary about this novel. Sure, some people have died and others are being controlled against their will, but the reality that women today are drowning under the weight of housework is significant enough to be horrifying. The amount of housework that women do still greatly outweighs the men in their household, and the pandemic has revealed all of the unseen work that women perform day in and day out. That’s not to say that men don’t do any work, but our society has raised women to quietly burden the majority of housework for the peace of the family writ large, which is exactly what Nora has done despite her exhaustion. Baker’s thriller is a commentary on the fact that we aren’t talking about this consistent inequality even as we flaunt a more equal society, as Hayden’s mother tried to do at their gender reveal party. Just because a husband is doing more than his father doesn’t mean that it’s equal to his wife. Unfortunately, this speaks to an even larger societal reliance on single-earner homes because as more queer families are included in studies, we find that they too divide chores and work up based on who earns more. While The Husbands never confronts same sex or queer marriages, the commentary is universal: we rely on one person to earn money and one person to take care of the home. Baker, instead, urges readers to foster more equitable homes, especially when both partners work.

The Husbands leaves readers wondering about the morality of a perfect life. No, you shouldn’t control your spouse, but it is making the lives of families in Dynasty Ranch run more smoothly. No, you shouldn’t expect your partner to do all of the housework while you work outside of the home, but it does make Nora more successful in her career. By meditating on this single fictional suburb in Austin, Baker suggests that the solution to marital problems isn’t hypnotism; it’s both partners compromising, practicing give and take, and actively listening to their partner’s needs. We can’t all be perfect partners, parents, employees, and friends; sometimes, we fail, and that’s okay. Learning to fail and learning to communicate are crucial to our society as well as our families because if we don’t start, we will never break the cycle of hypnotic housework.

Read this Next: BitchReads: 13 Books Feminists Should Read in August 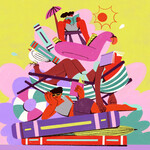 by Evette Dionne
The books just keep on coming.