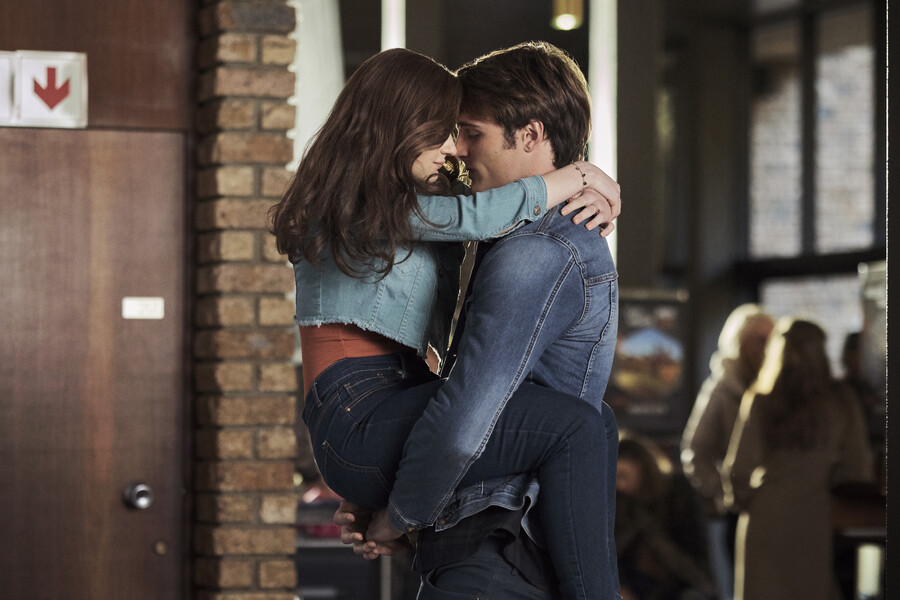 This past weekend, The Kissing Booth 2 debuted on Netflix, and it has remained in the top slot every day since. Netflix’s chief content officer Ted Sarandos told Vulture that the first film was “one of the most-watched movies in the country, and maybe the world.” The Kissing Booth series is a fluffy, unrealistic teen drama, stuffed with tropes and predictable dialogue. It, to be frank, feels just like most of the fanfiction I stumbled across as a high schooler—which is not surprising, because The Kissing Booth is essentially fanfiction. Beth Reekles originally published the novel in 2010 on popular fanfiction site Wattpad, where it had more than 40 million hits, and in 2014 Vince Marcello (Zombie Prom, 2006) was hired to adapt it for screen.

Rather than being fanfiction of an existing show or book, it was an original story, but it is still largely understood as fanfiction due to its Wattpad origins, the classic fanfic tropes it employs, and the nature of its audience, who are fanfiction readers. In a reflective interview in 2018, Reekles told Teen Vogue about the film’s Wattpad origins. “I started reading on there not too long before I started posting, and I really loved the community,” Reekles said. “People were so supportive of other people’s stories. I would read stories where maybe the grammar wasn’t great, but people didn’t care. They loved the story and were so encouraging. I thought I’ll share my stuff—because why not? If no one likes it, it doesn’t matter.” There’s something democratic and freeing about a world where the books that young women write on fanfiction sites can be printed and can debut on Netflix. But why are so many of these books misogynistic?

A 2013 Entertainment Weekly interview calls Reekles “the teen E L James,” a reference to the author of Fifty Shades of Grey. Like The Kissing Booth, Fifty Shades was originally fanfiction. James, who previously wrote as Snowqueens Icedragon, published the series as Master of the Universe online in 2009; by 2013, James was the highest-paid author in the world, with $95 million in earnings, not a small feat, but unsurprising considering her seven-figure paycheck for the first adaptation. “For better or worse, E.L. James represents fanfiction in mainstream culture,” Hayley Cuccinello wrote in a 2017 Forbes article. While fanfiction predates the likes of Twilight, Cuccinello wrote that the financial success of these fanfics-turned-films had tangible impact on publishing: “The success of the Fifty Shades franchise triggered a gold rush, with publishers clamoring to find the next big thing in fanfiction.”

Another example of fanfiction’s reach, and the variety of fanfiction that exists—ranging from true fanfiction like Fifty Shades to original stories made in fanfiction communities like The Kissing Booth—is After, a Harry Styles fanfiction written in 2013 by Anna Todd that was turned into a novel, with Styles’s character rennamed Hardin Scott, and, ultimately, brought to screen in 2019. In and of itself, fanfiction isn’t bad. If anything, it garners unfair amounts of criticism because of its origins in and ownership by women, especially teen girls. In 2013, Anne Jamison edited Fic: Why Fanfiction Is Taking Over the World, an anthology that features writers musing about the prevalence and impact of fanfiction. “I would speculate that a great deal of the stigma surrounding Twilight and its fans—among other fans, even among other fan writers—has to do with internalized gender and genre prejudice,” Jamison wrote.

Fanfic offers a space where teen girls lead, learn about romance, sex, and writing, and can (and do) diversify the stories they’re offered. And it gives them a space to center themselves and their stories, and to see themselves and their experiences reflected without the layers of edits and worries about marketing and advances. In fanfic, teen girls can just exist. “It strikes me as obvious why so many teens and women flock to Twilight and Harry Potter fanfic smut,” Lauren Billings writes in “A Million Words,” a piece in Fic. “We are at our most open to experience, most beautiful, most sweetly innocent as older teens.” Fanfiction authors push each other to be more thoughtful, more inclusive, and to offer more representation than the authors they seek to emulate offered in their own miniworlds.

Fanfiction gives its communities of young women power, including the power to imagine better universes. So why is so much of the fanfiction that we find ourselves watching so sexist and so harmful? The Kissing Booth is essentially the story of a high school girl, Elle (Joey King), who falls for her best friend Lee’s (Joel Courtney) bad-boy older brother, Noah (Jacob Elordi). The trio is so close that they’re almost family: Elle’s mom died, so their mom, Sara (Molly Ringwald), acts as her mother figure, and they regularly have family dinners. Noah and Elle’s romance begins when he kisses her during a kissing-booth fundraiser where she’s blindfolded, and their relationship quickly spirals into one of those classic toxic relationships that populate Netflix’s teen dramas.

Noah, like many high school bad boys before him, has a history of violence that includes beating up Lee. As The Kissing Booth progresses, Noah becomes increasingly more violent, even going so far as to beat up a boy who harasses Elle and threatening to break the noses of any boy who attempts to ask Elle out. When Elle tells Noah, “The days of you controlling my life are over,” he responds, “We’ll see about that.” It’s supposed to be romantic, a sign that Noah really loves Elle, but later, when a boy hits on her at a party, Noah appears out of nowhere in an enraged frenzy, tackling him by the campfire and huffing and puffing as Elle grabs his arm and begs him to leave. After Elle refuses to drive home with him, Noah bangs on the car. “Get in the car, Elle,” he says, slamming his fist on the door. “Please,” he says, apologizing. “You think I meant to fall for my brother’s best friend?”

Fanfiction gives its communities of young women power, including the power to imagine better universes. So why is so much of the fanfiction that we find ourselves watching so sexist and so harmful?

For Elle, this declaration is enough because he’s said he’s falling for her, and over time, her burgeoning sexuality becomes linked to his. In the first film, this culminates in several nonsensical and dangerous scenes, as she tries to reclaim her sexuality from the possessive boy she’s known since birth by stripping drunk on a pool table at a party Noah told her not to come to and dirty dancing in the boys’ locker room. The Kissing Booth 2 illustrates similar disregard for boundaries. Noah has gone off to college and he and Elle are attempting to figure out their long-distance relationship. Here, we see both of them becoming increasingly possessive. Within the first 10 minutes, Noah calls Elle’s school pretending to be her father to get her on the phone since she’s ignoring his texts.

Elle gets paranoid about Noah’s new female friend, Chloe (Maisie Richardson-Sellers), though she herself spends much of her time hanging out with Marco (Taylor Zakhar Perez). While Noah and Elle’s relationship feels less toxic in this film, which is slower and drags throughout its more than two-hour run, the pair still struggles to be honest with each other: When Elle visits Noah and finds an earring in his bed, she freaks out—assuming it’s Chloe’s earring—and heads back home. While The Kissing Booth 2 suggests that the film’s writers realized that presenting toxicity as love is harmful to a largely teen audience, they still choose to pit Chloe and Elle as rivals rather than friends, feeding into an age-old sexist trope. Netflix has already announced that there will be a third film in the series, which has left me wondering: What other so-called regressive fanfiction will make its their way onto our screens, leaving some viewers swooning and others clenching their teeth to get through the endless toxicity and warping of teen romance?

“There’s something fascinating about the way a community decides what stories to promote,” Billings writes in Fic. “There isn’t an editor or a team of editors reading a book and choosing to put it out there. Instead, it’s a collection of people—mostly women—who pick up a fic and decide they love it.” But there’s a shift when fanfiction enters the mainstream publishing world. We lose that community force in favor of money and sales. Both The Kissing Booth and Fifty Shades of Grey have left their roots, broadened their audience, and had a different impact than originally intended. It’s not that Reekles and James failed their audiences by creating misogynist stories that present abuse and harm as love and romance—it’s that the writers of such fanfictions are the ones whose work is supported, adapted, and brought outside their fanfic bubbles.

“Beth was a fresh new voice whose story connected with millions of readers all over the world on Wattpad, before becoming a published book,” Aron Levitz, head of Wattpad Studios, told TechCrunch in 2018. “We were able to work with Netflix to market the film on Wattpad and make sure the story’s fans around the world hit ‘play’ when it started streaming. And now it’s one of the most popular movies on the planet.” It’s not enough for us to put the onus on teen readers to know the difference between harmful and empowering fanfiction. We have to look to those who are combing fanfiction communities for content, so greedily excited to shove hundreds of thousands of dollars to bringing these harmful narratives to a wider audience, impact be damned.

Read this Next: Revenge of the Feminerd: Fanfic is Underrated 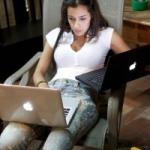 by Jarrah E Hodge
I’ll admit there’s a lot of fanfiction that can read like sloppily edited romance novels (including my first couple...