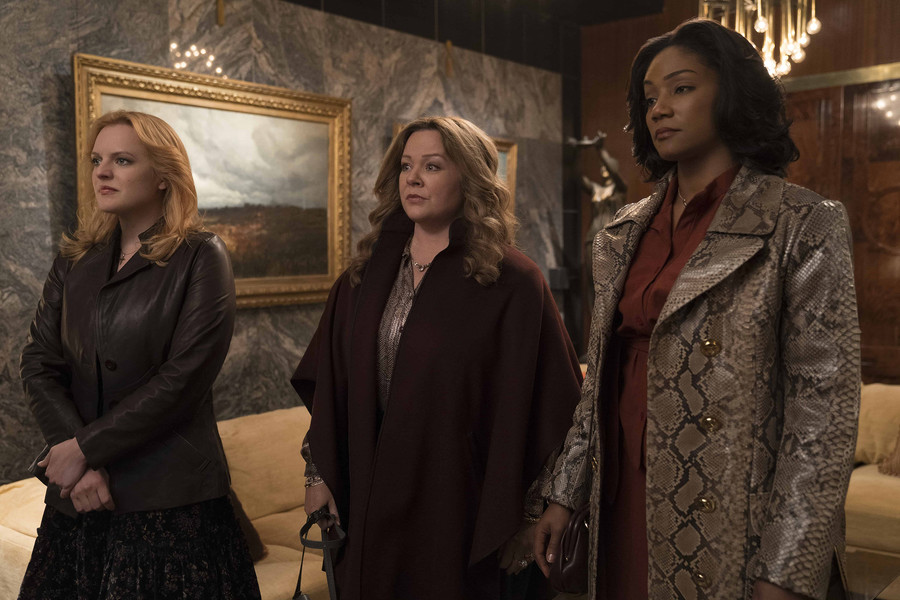 DC Vertigo’s The Kitchen is a comic with the classic structure of a mob movie. The pulpy 2015 fable (created by writer Ollie Masters, artist Ming Doyle, and colorist Jordie Bellaire) centers on three women who take over the duties of their incarcarated husbands, who happen to be mobsters. In the 1970s, in the Irish-gang turf of New York City’s Hell’s Kitchen, Kathy and Raven—along with their quiet, more subdued friend Angie—are the central trio of a morality tale about the importance of family, friendship, and love over money. In recent years, the mob narratives templated by Francis Ford Coppola and Martin Scorsese have largely moved to television, in the form of The Sopranos, Boardwalk Empire, and Peaky Blinders. But each has the same old wisdom to impart to us: No matter how much money and power you accumulate, you are still mortal—and sooner or later you’re going to have to answer for your sins.

This is not the wisdom writer and director Andrea Berloff wishes to impart with her comedy-drama film adaptation of the indie comic. Berloff’s The Kitchen is a female-empowerment story at its heart, a period piece punctuated with a constant stream of you-go-girl moments. Berloff made countless changes to the story in service of this vision, including turning the character of Raven into Ruby (Tiffany Haddish). Apparently the only Black woman in Hell’s Kitchen, Ruby is married to a callous man with a racist family who doesn’t respect her. The quiet and contemplative Angie, meanwhile, is rewritten as Claire (Elisabeth Moss), a domestic-abuse survivor who uses violence as a means of catharsis.

Kathy (Melissa McCarthy) is the comic’s only main character who retains her name in the adaptation. Kathy’s relationship with her husband, Jimmy (Brian d’Arcy James), helps explain why she’s willing to take a stab at the family business: Though Ruby and Kevin (James Badge Dale) seem to share a mutual disdain for each other, and Claire lives in fear of her violent husband, Rob (Jeremy Bobb), Kathy and Jimmy truly love one another. As it turns out, Kathy, Ruby, and Claire take to mob life much better than their husbands. In the comic, the women take care of business with good old-fashioned brutality and ruthlessness, and all three prove to be more reckless than their mates—early in the story, they put a man in a coma, and more bodies pile up from there.

In Berloff’s film, however, the majority of the violence is carried out by men: Kathy and Ruby give various orders, while their cronies, including Vietnam vet Gabriel (Domhnall Gleeson) carry them out. Claire is the only one of ther central trio who really gets her hands dirty, killing and dismembering bodies and eventually leaving their remains in the river. Of the three leads, Claire’s characterization hews closest to that of her comic counterpart, Angie, a woman who kills with a moral compass and has little interest in the glitz and glamour that comes with climbing the mob ladder. The violence is often played for laughs made possible by the film’s framing of each kill as not only justified but morally necessary.

McCarthy’s Kathy is a much more contemporary character. Unlike her comic counterpart, screen Kathy conquers Hell’s Kitchen with a mother’s intuition. Her approach to mob activity is an emotional one, focused on building up the community and creating jobs for struggling workers. Fresh off 2018’s Can You Ever Forgive Me?, McCarthy continues to demonstrate the expansive range of her talents, playing a character unique to cinema: a female mobster with the loving spirit of a caregiver. For Kathy, stepping into gang life means taking care of the people around her. This is a sentiment that isn’t shared by her closest friend, Ruby, which causes conflict between them.

Berloff revealed in a recent Forbes interview that she “asked that her script factor in a role for an African American performer.” Berloff’s intention was “to create an authentic character and actively discuss how the Italian American community and mob movies have avoided the race topic.” It’s a well-meaning  change, but one that has the effect of confusing Ruby’s place as a character. In the original comic, the sibling rivalry between Kathy and Raven—one sister is a well-liked strawberry blond in a loving marriage, the other a black-haired, emotionally volatile grudge-holder in a loveless one. By morphing Raven into Ruby and making her Black, the organic connection between the comic’s most prominent characters is severed by adaptation. And McCarthy and Haddish just don’t have the chemistry to pull off a “best friends” dynamic.

The Kitchen is Berloff’s directing debut, and that could account for the film’s prizing of symbolism over rich storytelling and its determination to shoehorn female empowerment into a story that wasn’t written with it in mind.

While Berloff should be applauded for insisting on casting diversity, it shouldn’t come to the detriment of the story. As it is, Haddish is left twisting in the wind, with script and direction that has no concept of how a Black woman thinks, feels or speaks. In many scenes, it seems as if Haddish is straining to keep her face as motionless as possible, pushing for a stoicism that runs counter to her expressive talents. When Claire mentions that she wants to get a real job, for instance, Ruby asks: “Who is gonna hire you? Besides getting hit, what other skills do you got?” The line is both jarring and delivered unconvincingly. Every one of Ruby’s lines, in fact, is delivered with a cruelty that presents Kathy and Claire as much nicer in comparison.

The Kitchen tries to explain Ruby’s behavior with a backstory that features an abusive mother and racist mother-in-law (Margo Martindale), but their treatment of her only makes her hostility toward Kathy and Claire all the stranger: They’re the only people who treat Ruby with any decency at all, so why does she hate them? There could have been a much easier way for Berloff to inject diversity into The Kitchen’s core story without losing the familial conflict that drives the tension: Ruby could have been biracial. As a half-Black, half-Irish woman with a mother in Harlem and a father in Hell’s Kitchen, Ruby could have portrayed the fascinating struggle of a woman caught between two worlds, unsure of where her loyalty should ultimately lie. This would create a natural strain on her relationship with Kathy, her white half-sister with closer ties to the Irish community than she could ever have. It would also make more sense of her marriage to Kevin, and explain his reluctance to stand up for her to his relatives in a community that prides itself on being ethnically monolithic.

The Kitchen is Berloff’s directing debut, and that could account for the film’s prizing of symbolism over rich storytelling and its determination to shoehorn female empowerment into a story that wasn’t written with it in mind. The film is populated by generic Girl-Power moments, including a scene where a mobster’s wife (Annabella Sciorra) walks up to the main trio to applaud them for taking on the men. A later scene finds Kathy’s disapproving father finally accepting his daughter’s criminal lifestyle: “Times change. You do what you gotta do.” The film ends on an awkwardly positive note, as though ushering in a new age of female gangsters is tantamount to equality.

The traditional mob narrative is one that charts the rise and fall of people who often can’t get out of their own way. Using film to examine the various cultural dynamics between criminal outfits that are uncharacteristically diverse in ethnicity and gender is a fascinating impulse, and those aspects of The Kitchen are the most interesting. But ultimately, the film pushes for a shallow image of female unity, flattening the complex characters from the comic into easily readable types. The comic has none of this messaging, opting instead for a more universal morality tale about putting family and love before money. It has all the rhythms of good pulp, only giving readers the information they need while leaving the rest to speculation. As it turns out, a more straightforward adaptation of The Kitchen would have made for a better film.

Read this Next: In "Spy," Melissa McCarthy Screws With Your Expectations—And Gets the Last Laugh 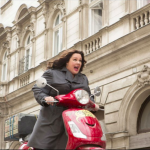 by Rebecca Olson
Spy movies playing on the James Bond trope have been boring for years. Even comedies like Archer, which satirizes the...